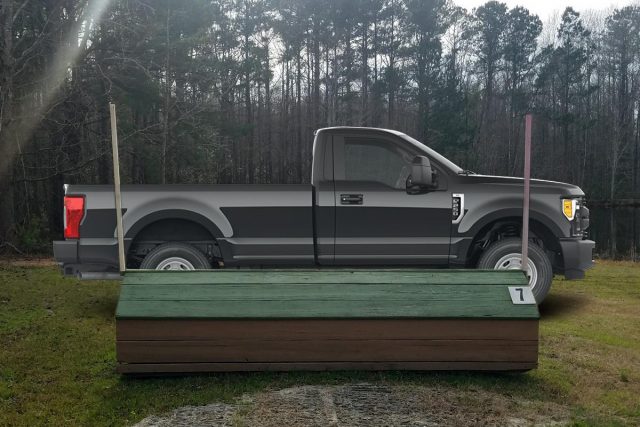 Even though we’ve been told to expect the unexpected, sometimes we’re still thrown off our game. Here is Ainsley Jacobs’s latest account of her adventures in eventing. 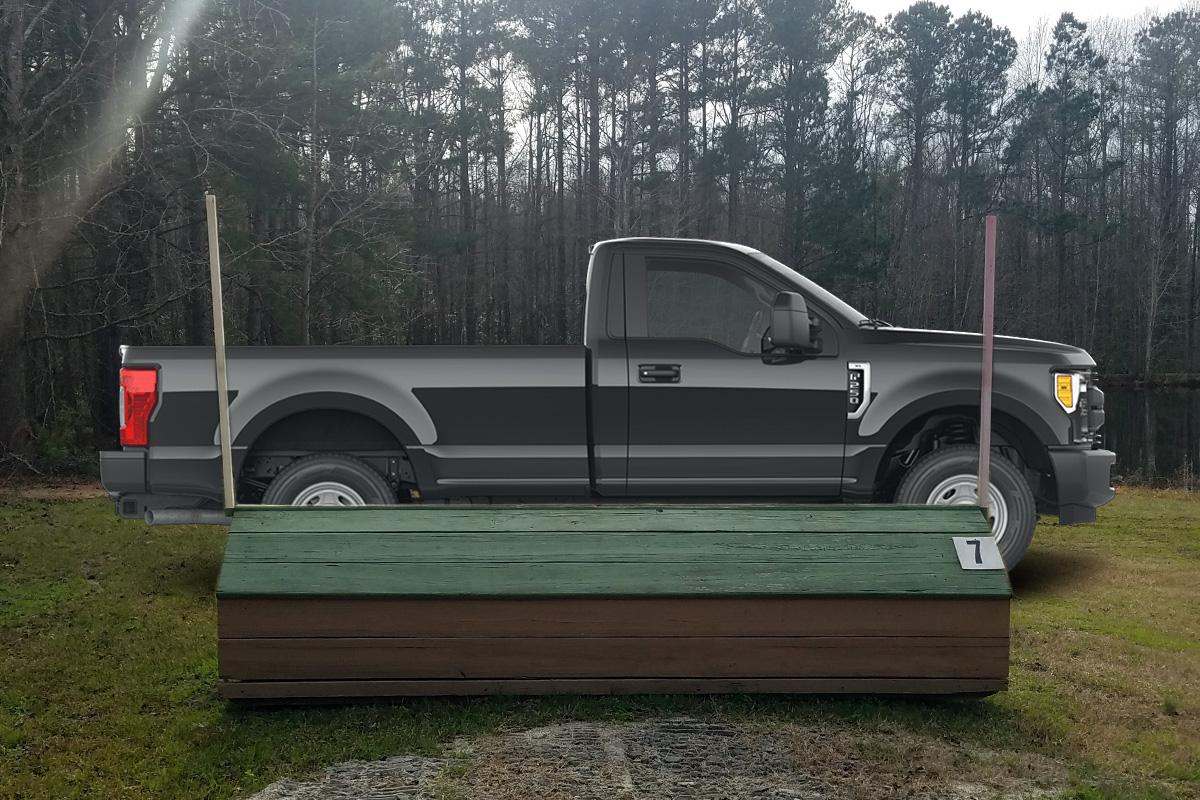 Photoshop of what we saw approaching the jump – now that’s an XC question we’ve never seen before! Photo by Ainsley Jacobs/Ride Heels Down.

It’s been nearly four years since I last competed at Full Gallop Farm in Aiken, SC. Since I’m trying to qualify for the USEA American Eventing Championships at Novice this year, and since we’re great at being average, I know that I need to stack the deck in my favor as much as I possibly can if I’m going to do it.

Full Gallop sometimes hosts 1-day USEA-recognized Horse Trials on Wednesdays – which is awesome. Why does that matter? Because I know that most adult amateurs have day jobs and can’t just pack up and run off to an event in the middle of the week without a lot of planning, or using vacation time, etc. Given that I work from home and make my own hours with my day job (racecar marketing stuff), I am very fortunate in that I have tons of freedom and flexibility. So, if I can go to an event with fewer amateurs, I (in theory) have a better chance to qualify or upgrade-place within my group.

After a good outing at the Stable View Horse Trials season opener a few weeks ago in Aiken where we once again did not qualify, I figured a Wednesday at Full Gallop would be a good gamble. So, I bathed JJ and packed my trailer on Sunday afternoon (such a strange feeling to prep for a show at the *end* of the weekend!) and readied everything to hit the road Tuesday.

(Side note: a week before, I had been prepping for the event at the barn and one of the other women there asked me about where I was going. I told her my amateur sneak attack plan, and her response was, “Wouldn’t you rather qualify knowing you deserve to be there?” I’m sorry, what?! Maybe I’m being overly sensitive, but I was pretty offended.)

I was going alone again, and had a nagging feeling all during the drive that I was “overdue” for a fall. It had been eleven months since my last departure, and exactly four years (off by just one day, wow!) years since my last tumble in competition. I knew it was coming, and I was suspicious that it would be coming soon.

Three hours later, we arrived at Full Gallop. Owner Lara Anderson was very helpful when I couldn’t find the stabling chart (which was posted, oops) and showed me where to park my trailer. There was a bit of mud and I said I was worried I would get stuck, but she assured me no one had gotten stuck in 20+ years because it’s sand-based and not clay… yeah, well, meet ME – destroyer of dreams, ruiner of things, screwer-upper of stuff. Challenge accepted.

So, I tried to park. And… yep, got stuck. I was super embarrassed (and also maybe a little proud for having done the impossible?) but Lara was very kind about it and quickly called Daniel Brown to come rescue me. He arrived with a tractor to tug me out, and we both joked that “when things go wrong the day before, usually the show is a breeze!” …see above comment about my life. :-\

Anyway. The horse show gods had blessed us with perfect 70* weather, in February, but I wasn’t sure if it was going to rain at night so I just set JJ up with the bare bones basics – bedding, hay, feed, water. I didn’t want to leave my stuff out to get wet, and since Lara parked me so close to my stall (thank you!!) I was able to work out of my trailer, which was nice.

I wound up running into my coach’s best friend, upper level eventer Morgan Conrad Batton of the famous Hitch and Tow and one of her students. Since I was alone, they invited me along for their course walks and I really appreciated that. Thanks, Morgan! 🙂

Overall, it was a low-key day just spent chillin’. I even had dinner with a local friend at a little sports bar just up the road from my hotel and went to sleep feeling inspired…

I woke up on Wednesday rested and ready to ride. I fed JJ his breakfast, hosed him down (poop is NOT a pillow!!) and got tacked up. Our dressage warm up was actually kinda good, he felt happy to get to work and our connection was solid.

We went in at A and I told myself it was ours to win – which it almost was. We had a really decent test, no major bobbles or screw ups, and I feel like I rode well. I wanted to make my coach proud, to show her I do listen during our lessons and I’m trying hard to follow the advice she gives me, even when she’s not around to babysit.

Stadium and cross country were scheduled to be run back-to-back only 10 minutes apart. No big deal, we’ve done that plenty of times. After an hour of downtime, I got JJ dressed in his XC gear and did the same for myself. I hesitated about wearing my air vest since it was fairly hot out and it was “just Novice,” but reminded myself I was completely alone and couldn’t risk getting hurt because then JJ would basically be abandoned and that’s not okay. So, the air vest went on. Sometimes, I’m smart.

Our stadium round was totally easy-peasy lemon squeezy. There was a triple bar, which we haven’t jumped in five years, but JJ took it like it wasn’t even a thang. We had one hard rub but, luckily, the rail stayed up and we finished double clear. On to the fun part!

We walked over to XC, JJ’s blood was up, and we popped a couple solids before heading into the start box. We got the count down and were off without a hitch. The first five jumps, including a ditch and a down bank, went just fine.

Coming in to the 6AB combo, the jump judge called for us to stop because the rider before me had fallen – I hope they’re okay, whoever it was! We had never been stopped on course before, so I wasn’t entirely sure what to do and it definitely threw me off my game a little. We restarted after a brief delay, but I felt like our “flow” had been interrupted.

The very next jump was through a patch of woods then a 90-degree turn to the right. There wasn’t really a lot of room to see the jump before we were practically on top of it, and as we came galloping towards it, I realized there was a black truck in our way. Literally a truck, and literally parked right behind the jump where we were supposed to land.

Photoshop of what we saw approaching the jump – now that’s an XC question we’ve never seen before! Photo by Ainsley Jacobs/Ride Heels Down.

I was so stunned and busy trying to process what the fu, er, what the truck was happening that I brain-farted, so I didn’t think quickly enough to circle. We pulled up and slammed on the brakes at the last second.

As I circled back around to “reset” and maybe try again, the truck had vanished and I was later told it sped off, which certainly didn’t help the escalating situation of JJ’s brain being fried.

Between being held at 6 and the mystery truck at 7, we were just all out of sorts by then. So, JJ stopped again but I can’t blame him because I had basically yelled “stop!!” the last time through. We circled back once more, I used my stick, and he said “screw this and screw you.” He dropped his shoulder, ducked out and deposited me into the dirt – good thing I had that air vest on! 😉

Fortunately it was such a slow-motion, non-issue fall that I had the presence of mind to hold on tight to the reins so that the little bugger didn’t go galloping off and ditch me to do the walk of shame back to the barn by myself.

I got up and looked around for the black truck of doom but saw nothing. I honestly thought maybe I had hallucinated it and there had never been a truck to begin with, but Dan was there jump judging and he immediately confirmed he “saw it, too” – and, not only did he have no idea who it was, but he didn’t know where the guy disappeared off to. VERY odd and kinda freaky, to be honest.

(Update: “After review, the truck had fishing poles and was trying to sneak in and fish. At a show. With 100s of people around.” – Dan. WOW, what the heck?! I hope that fishing guy gets his dose of karma ASAP!!) 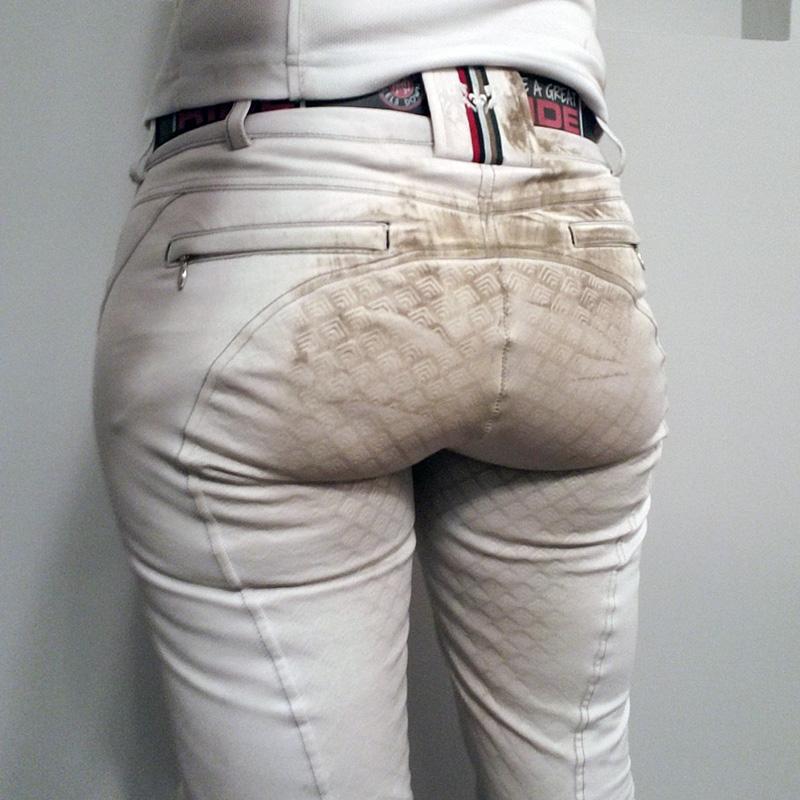 An extremely unflattering picture of my butt. At least there was lots of “padding” to land on. Photos by Ainsley Jacobs/Ride Heels Down.

So, JJ and I trudged back together. I got a silver lining surprise, though, when my tremendously talented and beautifully brilliant friend Taggert VinZant hollered at me from his car. He was parked on course (safely away from the jumps, though!) and was announcing the event – I had no idea, but it was so nice to see him!

I packed us up to drive home, fully prepared to have a pity party for myself, and immediately realized the one drawback to a weekday Horse Trial: traffic. The Atlanta rush hour had generously gifted me with an additional hour of travel making our total time en route 4+ hours, but fortunately a friend called to keep me company and helped get my mind off of things.

At one point during my drive, Lara from Full Gallop called me to graciously apologize for what had happened (even though it absolutely was NOT their fault that I had fallen off) and very generously offered to make things right. I don’t blame them one bit – stuff happens, it’s just horses. Plus, I learned a valuable lesson (see below) but it was very kind of them to extend that courtesy to me and I fully intend to go back and finish an event. Eventually.

Now, as I sit and write this, JJ’s safely back home and I’m back at mine as well, but I’m seriously super bummed. I checked the scores, because I was curious…

We had scored a 31.40 in dressage – our best-ever score at Novice. But it doesn’t matter, because we ended on a letter – not a number.

The worst part? If we had finished XC, we would have placed 5th overall with an amateur upgrade to either 1st or 2nd (depending on XC time) and that would have been the AEC qualifying score we needed. :'(

So, yeah, maybe we don’t deserve to be here after all…

But hey, at least I remembered my bit check this time.

If a truck (or anything else) is in your way on course… CIRCLE and wait for it to get out of your path!