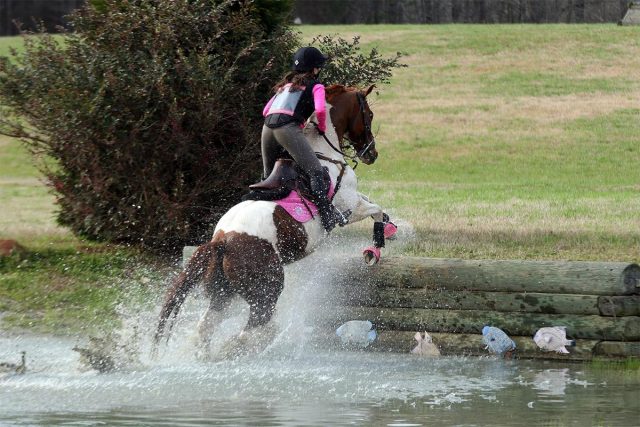 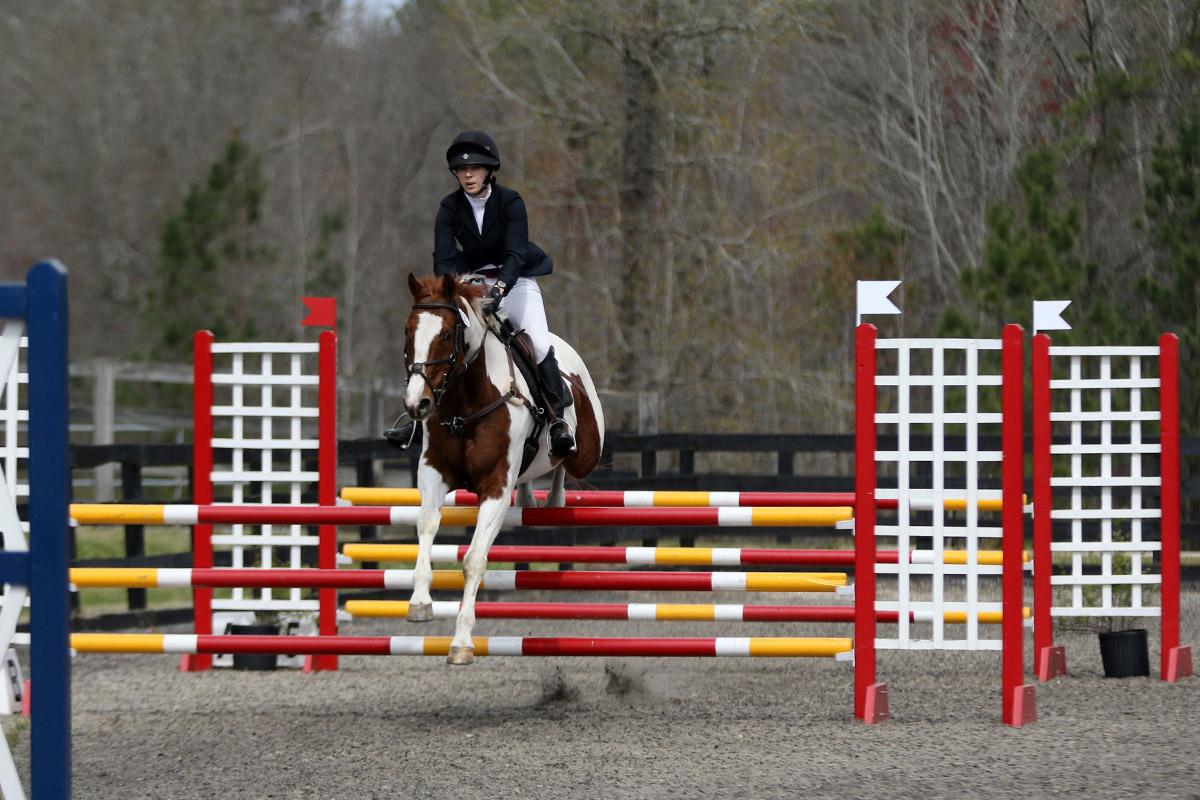 Pretty sure it’s safe to say we were both having fun. Photo by Erik Jacobs/P.TEN Marketing.

Well, the day finally came – we made the move-up! It was only a Training CT to start (because reasons), but… WE SURVIVED!

Leading up to the event, it didn’t stop raining. Ever. At all. It’s been raining in Atlanta non-stop for 37 years. I’m so tired of being wet…

We hadn’t jumped in a week (which is a lot for us) because of the rain and I thought we weren’t going to get to jump before the event during our normal Tuesday lesson, too, because even though it was finally sunny (HALLELUJAH!!) it was literally [below] freezing out. Fortunately, Beaumont Farm owner Christopher stepped in and dragged the arena for us right before our ride and magically made the footing perfect.

We did a quick warm-up and then jumped around some Novice-ish courses. It all went well, so coach Lauren Turner upped ’em all to Training at the end so we could finish out strong with a good show-prep. Well, not only was it easy freakin’ peasy, I also realized I was involuntarily doing something cool.

When we came into the first of the two Swedish oxers that Lauren had set, I thought to myself, “Oh, that looks big,” and then IMMEDIATELY thought, “No, that looks fun!!” And it WAS! I realized after that I had instantly switched my mindset from negative to positive and the jumps/whole course rode a thousand times better because of it.

We were ready to ship down to Poplar Place Farm a few days later for our Training debut, and Friday morning I was all excited and eager to get going. I hitched up my trailer and plugged in the electrical and heard a little pop and said “nonono I am ignoring that!!” Well, when I turned back around a few seconds later, the wiring was smoking and I definitely couldn’t ignore it. Craaaaap. Fortunately, I got VERY lucky and – long story short – it turns out the trailer’s interior lights shorted out and smoked a ground wire and the good folks at Robby’s Hitchin’ Post right up the road in Canton, Georgia, were able get me patched up in less than an hour.

Anyway, Poplar was only running 3-phases up to Beginner Novice to preserve the XC footing for the horse trials scheduled for two weeks after (which is why we were only able to do a CT), but I was grateful that there were still plenty of Novice and Training questions available for schooling once we arrived.

We warmed up over a few things and started tackling whatever Training questions we could find. Some were easier than others and some, like the coffin, were tricky. We jumped the (big) ditch first several times, all awkwardly, then progressed by adding elements. Working through the whole thing, I came in on a crap line, JJ said, “Nah, I’m not into that,” and off I went. I was frustrated and instead of risking putting another confidence-shaking ride on him (and me), I asked Lauren to hop on. She made it seem effortless (that’s why she’s the pro!) and I was grateful I had her support when I needed a helping hand.

Overall, it wasn’t a bad XC school, but it certainly could have been better. I remembered after that I hadn’t had anything to eat all day except for one little banana that morning… yeah, that probably had something to do with why I was useless in the tack! So, I eventually got through it and we continued on our way. We jumped some more stuff, hit a prelim (with a lowercase “P” for a reason) thing, then called it a day. 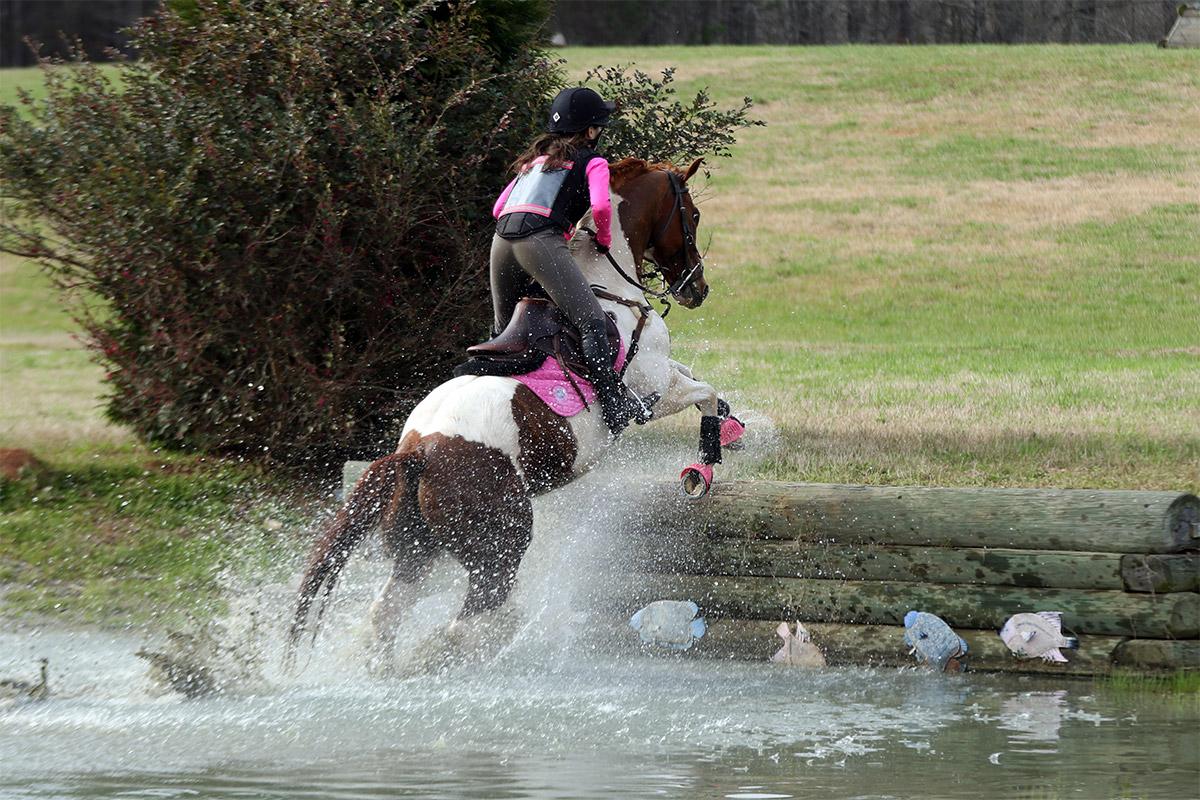 I scored some decent ride times on Saturday (10am and 12pm) so I didn’t have to rush in the morning which was nice. We had a relaxed dressage warmup and went into the arena feeling appropriately adequate. JJ jigged twice in the free walk and picked up the wrong lead for the left canter, but we got through it fairly decently and I was pleased just that we had managed to get it done. No more, no less.

When it was finally time for stadium, I was excited. I told myself it would be “fun” and mentally prepared for that. JJ was on point in warm-up, and we trotted into the arena when our number was called full of confidence.

The whistle blew, I cued for canter, annnnnd OH MY GOD IT WAS SO MUCH FUN I CAN’T STOP SMILING!! We had one rail down but otherwise it was one of the easiest, best stadium rounds we have ever had and I CAN’T BELIEVE HOW PERFECT JJ WAS! I literally crossed the finish, smiled, thought “That was easy!” and then thought “I kinda want to jump the prelim!” HA!!

To sum it up, our first Training CT was fun beyond expectations. We finished fifth (which is funny because it was like a deja vu of our event from exactly one year ago where I fell off Friday and finished fifth on Saturday) and I can’t wait to get out there and try a Training 3-phase next!!

Learn what your negative “trigger” words are and replace them with positive ones instead, even if you don’t believe it at first. It’ll take some time, but you’ll eventually be able to train yourself to a better state of mind.