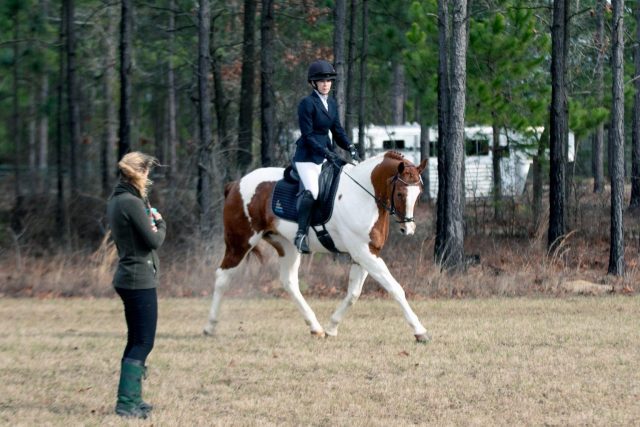 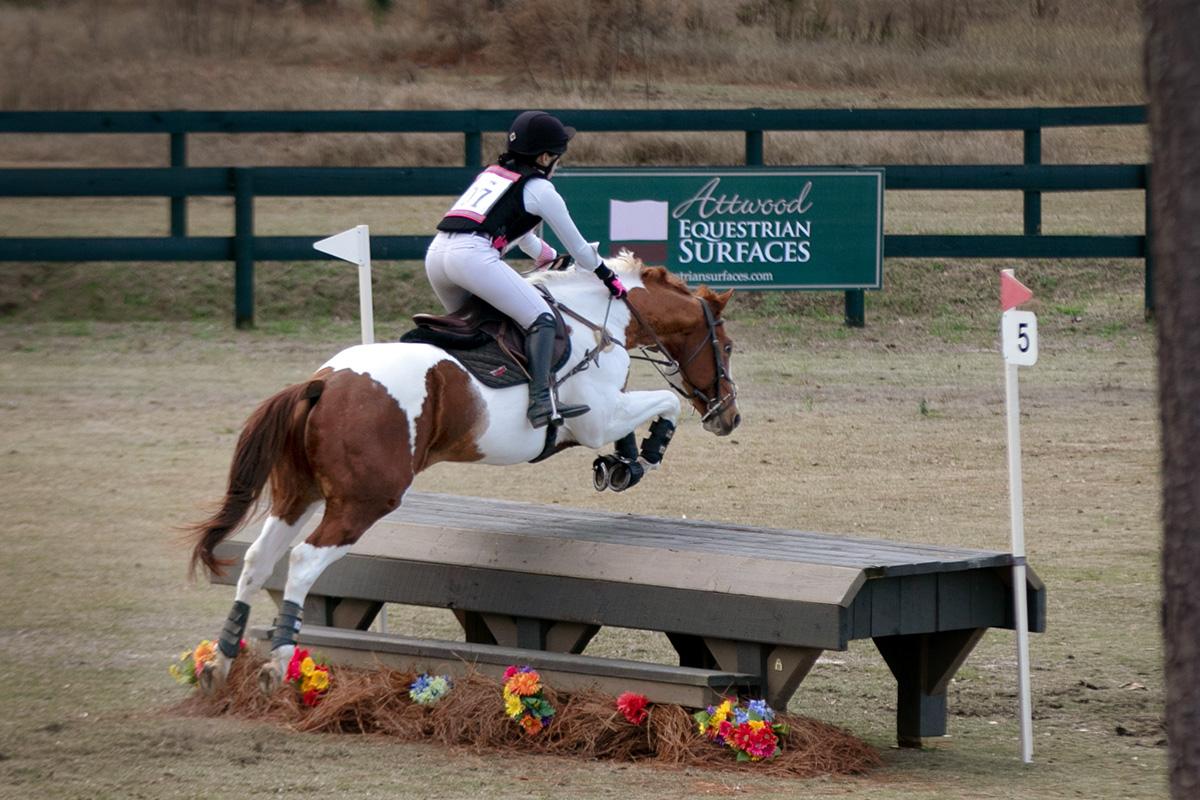 Last January, we ran our first ever Novice 3-phase at Stable View in Aiken, SC and it was absolutely freezing cold. The high was in the low 30*s and I remember being so miserable that I told myself I was not doing that Horse Trials again. Nope. Not ever. No thank you.

…Then Stable View very awesomely used a photo of me and JJ to promote the 2020 January Horse Trials in their event on Facebook. Crap. Well, I guess if we were the unofficial ambassadors of the event, then we had to go… the Universe was demanding it!

I feel like I say this in every post lately, but it’s been raining nonstop. Even with the great jump arena footing we have at Beaumont Farm, it’s still been too soggy to school. We were able to get ONE jump lesson in with coach Lauren New (Turner) of River Birch Farm on January 7, but that was it.

A week before the event, the forecast for Aiken was looking good and I was feeling better about my choice to go back there in January. I wasn’t nervous at all and was super relaxed. Then, since it was still raining here in Atlanta, a huge storm hit the Saturday prior and literally impaled my house with branches. The roof is gonna need some repairs, but overall I was glad it wasn’t worse. Still, a horse show isn’t a horse show without a bit of stress before it, right?! 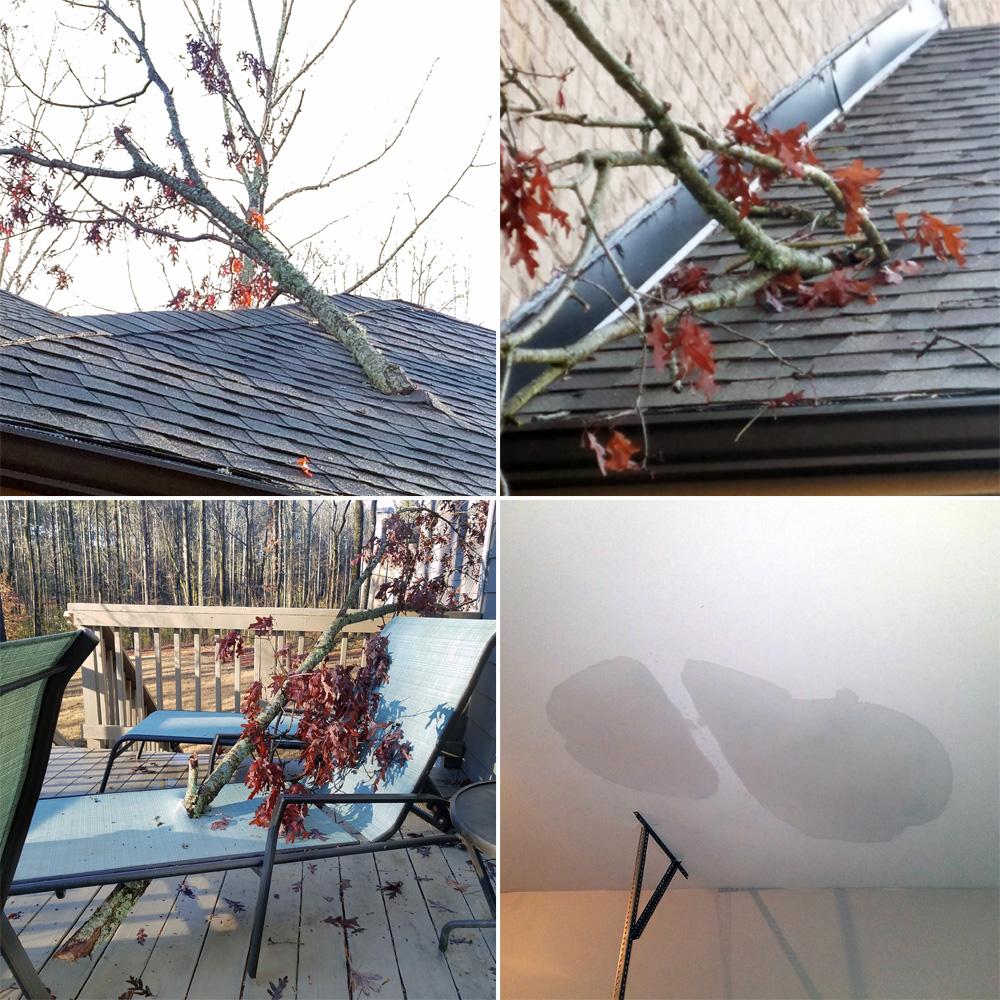 Storm damage – because it’s not a horse show unless you’re stressed out about something! Photos by Ainsley Jacobs/Ride Heels Down.

JJ and I had some good flat lessons a few days before shipping out and I felt like we were prepared to do well. We have been working SO HARD on our dressage lately! Friday before the event, I went to the barn, packed everything we would need, gave my little mud ball a bath and went to bed confident.

Saturday’s 3+ hour drive to Stable View was low key, and we arrived and settled in next to my friend Ansley and her awesome horse Dawson. Fun fact: I met them at the ’18 Area III Championships when JJ tried to run them over on cross country… and now we’re buddies!

A cross country course walk with coach Lauren showed a relatively straightforward series of questions, nothing tricky or trappy, just big, beefy solids. I walked stadium on my own later that evening and that seemed straightforward, too, then went for a second XC walk with Ansley.

As we were walking the water complex, she pointed out how the white flag was placed about two feet to the left of the water so horses that had problems could squeeze through without ever getting wet and we had a little laugh, thinking we wouldn’t have any trouble. After, we hit up the competitor party at the facility’s gorgeous pavilion, then I enjoyed a River Birch Farm team dinner and my hotel bed.

Lauren hooked us up with an awesome warm up and we went on in to ride Novice Test A. I felt like it was significantly improved from last year’s test – JJ was much steadier in the contact, softer in the bridle, our connection was good, and both his gaits and transitions were smooth. I wasn’t scheduled to ride dressage on Sunday until 10:59 am which was nice because I was able to sleep until 7 am. JJ got his breakfast and I threw some braids in, then we walked on down to the sandbox – which was actually grass. 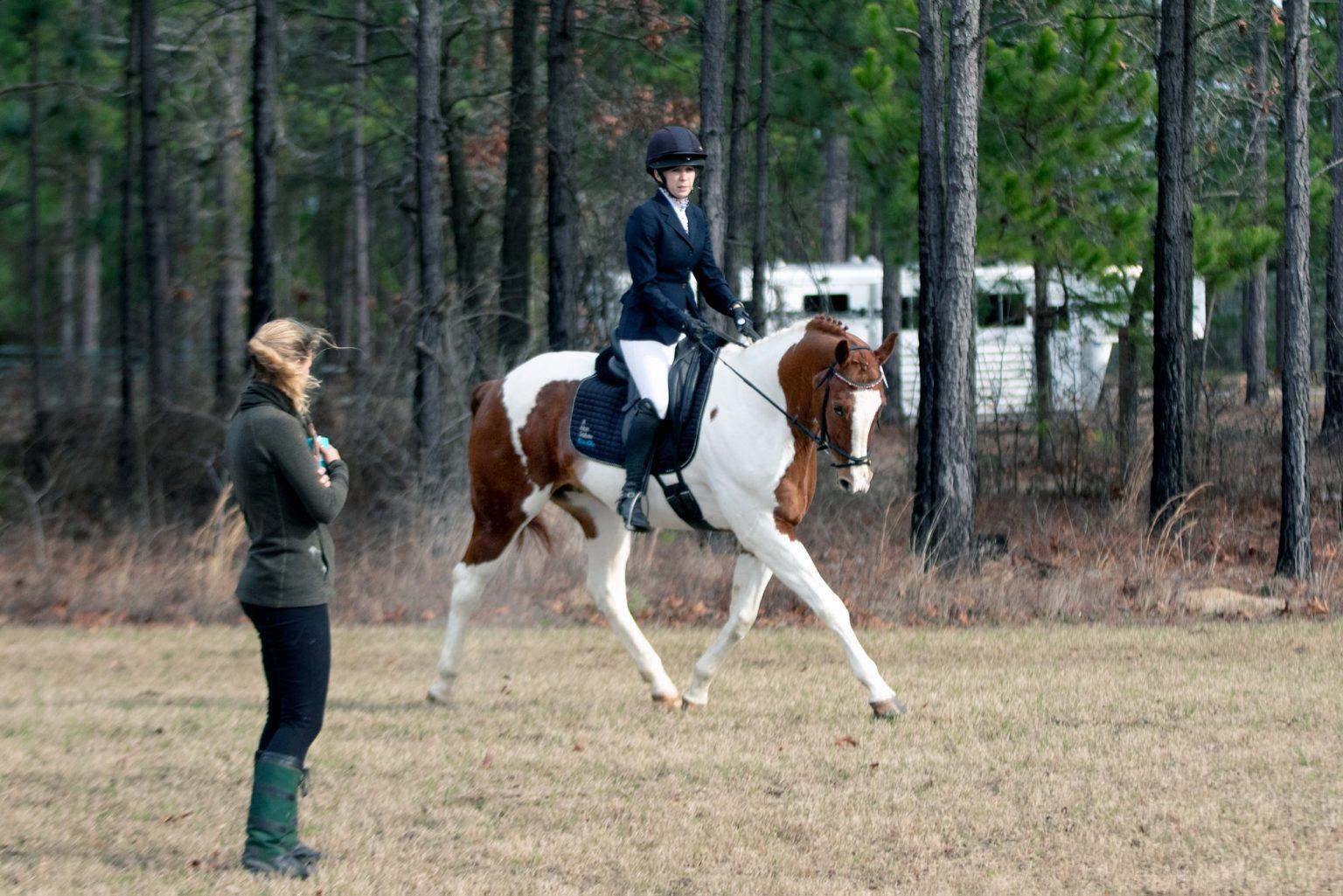 Now THAT is a trot we can be proud of! Thanks, Lauren New! Photo by Erik Jacobs/P.TEN Marketing.

Before the test, I had gone over to get a bit check but the lady doing them was away at the moment. I asked to wait but was told to come back after my test was over. I laughed and said I would probably forget and, of course… I totally did. I was heading back to the barn after leaving the arena when I heard Lauren yell my name across all of dressage and quickly remembered that I had forgotten – OOPS! So, we hurried over and got cleared by the official. Thanks for saving my butt and making sure I didn’t get disqualified, Lauren!

We had a brief laugh at my expense, then Lauren told me she needed to borrow my gloves. No problem, I took ’em off. Then she said she needed my reins, too. Without even hesitating, I hopped off JJ and started helping her undo them – then asked ‘why?’ I trusted she had good reason, so I wasn’t questioning the need – I was just curious. Turns out a friend’s student needed a last minute equipment change, so my stuff got borrowed. No big deal, I’m always happy to share if it can help someone out! Lauren smartly made a lead rope out of her belt for JJ, and everyone walked away happy. 🙂

I had about an hour before it was time to get ready for stadium, so JJ took a quick breather and I shoved food in my face. I had him drilled and tapped for studs during his last shoeing because I was still traumatized from the horribly slippery experience we had when we tried our last Training event in November and Lauren had shown me how to put studs in (my first time!) earlier in the day. The footing at Stable View was really good, but we both agreed it was a good learning experience for me and since I had paid to have him studded I might as well use ’em.

Anyway, stadium itself was a goddamn hot mess and I was embarrassed by how “disconnected” JJ and I were from our usual flow, but we went clear and stayed within the time allowed and that’s really all that matters. I realized afterwards that, other than the one jump school we had back on the 7th (which was nearly two weeks prior to the event itself), we really hadn’t jumped in over a month – that explained it and helped lessen the sting of shame.

We had 15 minutes before our cross country start time, so we walked over and popped a few warm-up jumps to freshen up. I guess he had gotten all the “woo hoo!” out of his system by then, because he was much more rideable. We headed into the start box, got the count down and headed off to have a great ride.

All in all, the course felt like an absolute walk (er, gallop) in the park for him. It was basically just some speed bumps along a predetermined path and we didn’t argue at all. I let him enjoy his happy gallop pace, and there was nothing that he even so much as slightly questioned or hesitated at, not even the black flag option corner we took – except one thing…

The water. The water that Ansley and I had laughed at the day before. The water that he’s usually SO GOOD with. The water we are jumping into, dropping into, and not having any problems at (except at Stable View last year, where he tried to stop for a drink).

I set him up coming into it with some half halts to give him a heads up, but right at the edge JJ was like, “NO THANK YOU” and swerved left to avoid it. He would NOT go in. I was laughing at what an asshat he was being, and giggled as I threaded him through the gap between the water’s edge and the white flag. As we slipped through the small space, all I could think about was me and Ansley joking about the riders that would have problems there… and we were one of ’em. Ah, karma.

After that, it was full speed ahead. I remembered to check my watch right as we were approaching the final jump and saw it was going to be tight. Not close to optimum, but scary close speed faults instead! My happy horsey had once again run a Novice course in a Training pace, and as we crossed the finish, we were only 4 seconds “safe” from getting a speeding ticket for going too fast.

Thrilled to be finished, we went back to the barn to decompress and await the results.

When I checked the scores, I was disappointed to see we had gotten a 37.60 in dressage – it felt SO much better than that and that was actually one of the worst scores we’ve received in the past year. Plus, the same judge had given us a 36.70 last year despite a much worse test that I had called a “fussy disaster” back then. I don’t understand… we did worse now with the same test and the same judge even though it was much better than last time. *sigh* 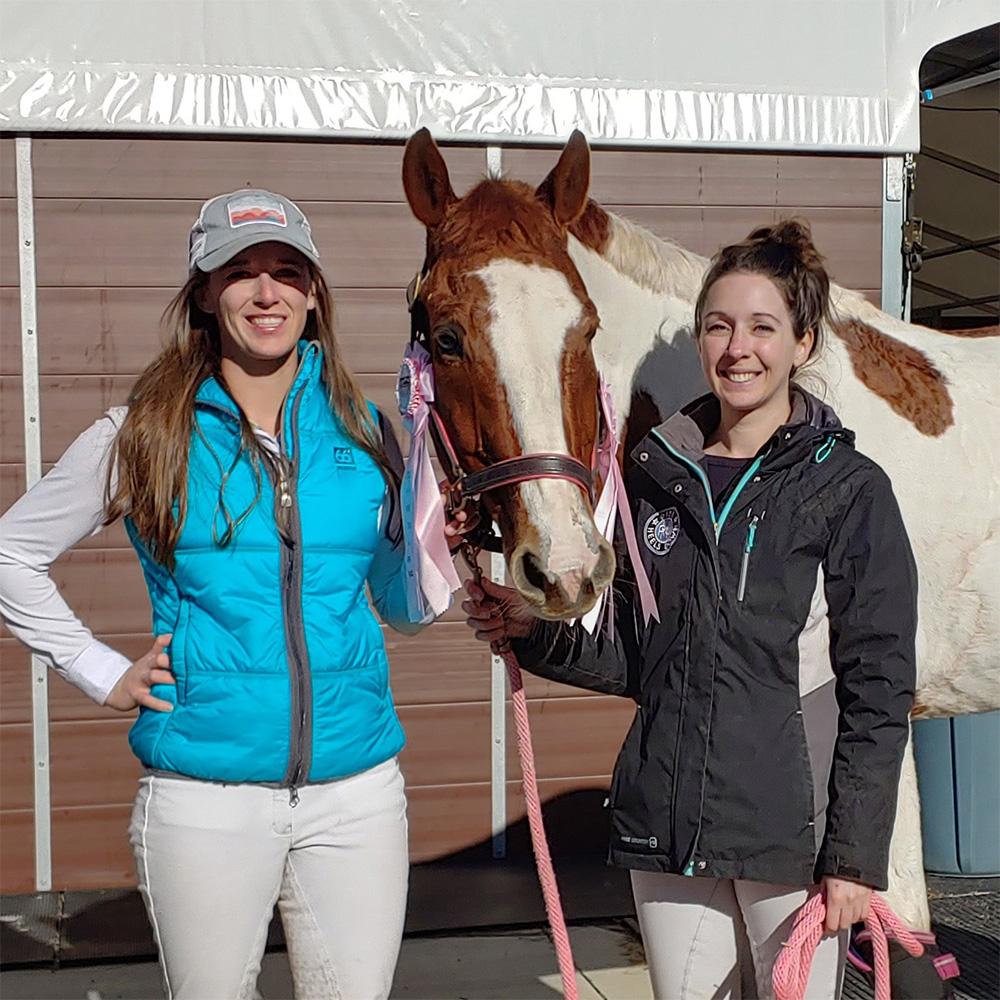 Ansley (left) rode in Novice-B and I rode in Novice-A. We both rode XC in exactly 4:26 and we both finished 5th! 🙂 Photo by Erik Jacobs/P.TEN Marketing.

And, truth be told, of 14 horse and rider pairs in my division (originally there had been 18!) only FIVE had double clear stadium rounds. And, only FOUR pairs were double clear in both stadium AND cross country – and we were one of them. Yeah, I feel pretty damn good about that. 😉 Either way, I was proud of JJ for not adding anything to our dressage score and we finished double clear all around to end up 5th overall. Once again, we’ve proven that we’re great at being average. No, I didn’t get the AEC qualifying score I had hoped for (the amateur “upgrade” only put us in 4th) but we DID qualify for Area III Championships… so, there’s that.

Now… on to the next one!