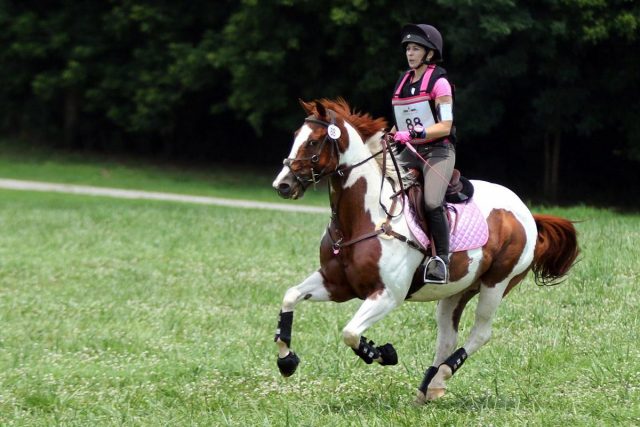 No one knows your horse better than you do, so act on your instinct when it’s telling you something could be wrong.

I make a shirt that says “Know Your Course & Trust Your Horse,” but I’m also a huge believer that you should “know your horse & trust your gut.”

Over the past year or so, I’ve noticed that JJ has slowed down a lot. It worried me, but wasn’t enough of an issue to really get concerned about. Recently, it’s gotten worse and today I finally did something about it.

Backstory: JJ used to be hot. He used to be forward. He even made me cry once because he was so fired up. Some of that was situational, yes, but he’s never really been a lazy horse; he’s always had good energy and was always happy and willing to do his job, especially when it came to jumping. 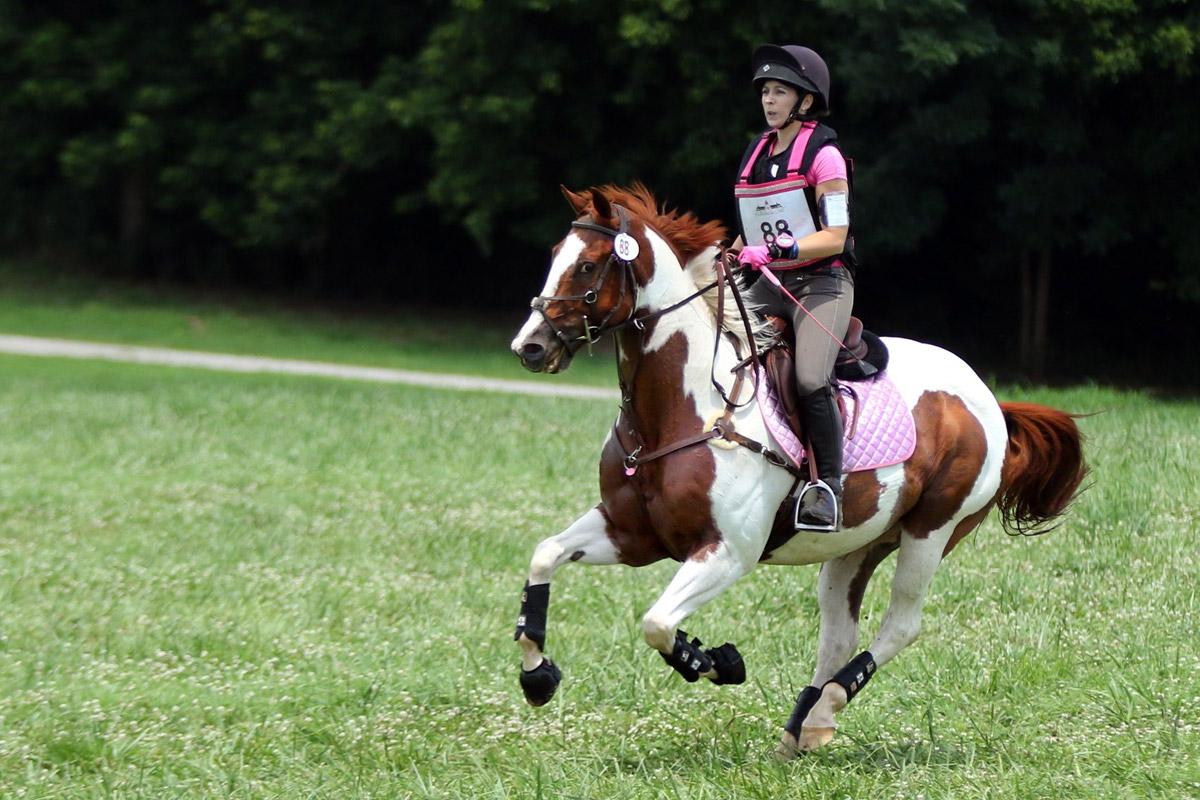 Summer of 2018, when he still had some fire in his belly. 🙂 Photo by Erik Jacobs/P.TEN Marketing.

In March of 2018, he popped a splint and had some time off to recover. He was good that summer, a little more chill than usual but nothing major. Then, over the winter slowed down to the point where I was concerned enough that I actually had him tested for Cushings (result: negative) and just wrote it off as no big deal.

When spring of 2019 came, I realized he had popped the *other* splint, too, over the winter but never went lame and was too fuzzy-legged for me to see, so I didn’t notice until after he had shedded out. Oops. But he seemed fine and still had decent enough energy, so we kept going.

This summer in Atlanta was brutal and JJ slowed down even more. He showed no signs of lameness or of being uncomfortable. He wasn’t resistant or anything that would cause concern. I assumed it was the heat and didn’t blame him at all. I kept telling myself “he’ll perk back up once it cools off.”

At one point I noticed he had developed wind puffs. Again, he never went lame, and I know they’re a non-issue other than being unsightly, but the “mom” in me couldn’t help but worry that maybe he was hurting but just was suffering silently?

Then he stopped getting on the trailer. He used to LOVE getting on the trailer so much that he would even load himself. When he suddenly refused to load after the USEA American Eventing Championships, I wondered – is he hurt or uncomfortable and is telling me he doesn’t want to work? He DOES have a history of communicating very clearly and very well, after all… 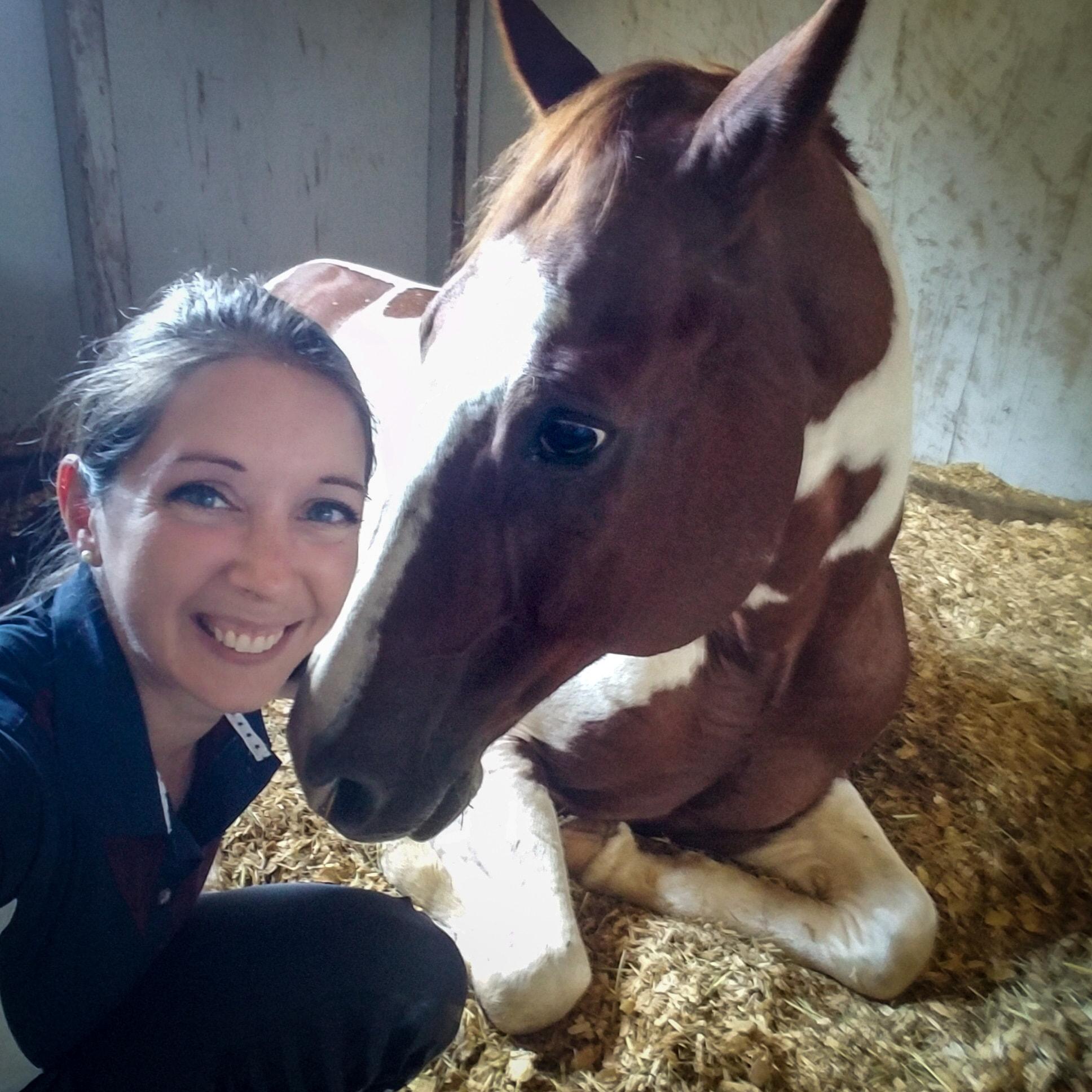 Cuddling is cute, but him laying down and letting me hang out was really unusual behavior for him! Photo by Ainsley Jacobs/Ride Heels Down.

Last weekend, we went to the Lucinda Green MBE clinic and had a blast, but there was “no gas in the tank” when it came to his energy level. I literally had to cowboy-kick him to get him to canter during our warm up for XC and yes, I was embarrassed/concerned to be riding a Training level horse I couldn’t even get to move. I assumed it was because he had a few weeks off due to an abscess and was just tired.

Finally, the heat broke and the temperature here dropped from 90*s to 50*s literally overnight. I was SO happy – I figured JJ would be frisky and ready to go again! But, when he didn’t perk up at all, and when he was still sluggish and lethargic, I finally said, okay, we need to get the vet out and put all of these clues together to figure out what’s up.

I assumed that he was uncomfortable somewhere but just wasn’t telling me because he’s so goddamn stoic. I assumed maybe this is just his “new normal” since he’s getting older but I really didn’t want to think that was it. Heck, my friend Ellen Doughty-Hume’s amazing horse Obie ran the LRK3DE 5* and he’s 18… yeah, I know JJ’s nowhere near that level of fit/athletic, but, still… JJ is 16, so he shouldn’t be “over the hill” just yet. Right? So, maybe he’s just at the point of where we need to start thinking about maintenance and maybe doing hock injections?

Today, after listening to my brief description and recap of JJ’s “odd” behavior, watching him jog after being flexed and discussing his feed/hay, the vet immediately said “I think he’s anemic.” I was shocked – that wasn’t what I was expecting at all! So, he drew some blood and said he would get back to me.

I JUST got a text, and, guess what? JJ is confirmed anemic! So, I’ll be starting him on the Red Cell supplement (and maybe a couple cheeseburgers?) and keep my fingers crossed that he’ll be feeling much better soon.

(Can we take a minute to appreciate what an amazingly freaking GOOD BOY he is for still running Training, and for doing it well, despite feeling like he “totally can’t even” all the time? Real talk, JJ has the biggest heart!)

I’m glad I trusted my gut and got him checked even though he wasn’t lame and showed zero solid “signs” of anything wrong (other than just being lazy, but that’s so unusual for him!) – my only regret is I wish I had him checked out sooner!

No one knows your horse better than you do. If you suspect something is up, you owe it to him/her to investigate – trust your gut!