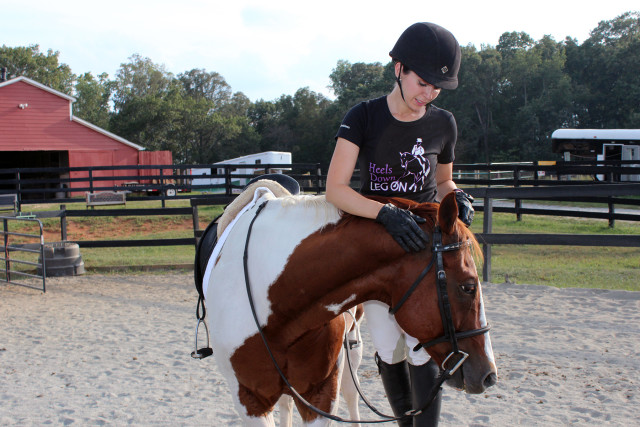 As her horse JJ rehabilitates from a ligament injury, adult amateur eventer and blogger Ainsley Jacobs details the importance of listening when your horse speaks up.

JJ demands pre-ride cuddles. When his behavior changed and he nipped my leg, I immediately knew something was up. Photo by Erik Jacobs/P.TEN Marketing.

In my 20+ years of riding, I’ve thrown my leg over hundreds of horses. Many have been lesson horses, and while most were happy to cart me around without a care in the world, there have been some that were flat out opinionated, obstinate and ornery. Who can blame them? Lesson horses, are, essentially, the “rental cars” of the equine world and I can’t say I wouldn’t be crabby if little kids kicked me around all day, too.

However, knowing the difference between when a horse is simply being cranky, or when he’s trying to communicate can be a real game changer.

As JJ’s rehab progresses, I can’t help but think about how the fact that he communicated to me that he was hurting may have saved both of our lives. How? Read on!

Example 1: A few weeks after I first started working with JJ in 2014, he began bucking when I’d ask for canter. He had never bucked with me previously, and it wasn’t a malicious “get off me, woman” type of a movement. It was more of a “hey, I don’t like that” thing.

At first, I reprimanded him for the bucking behavior, but it persisted. My trainer and I figured he was back sore, so we put him on meds and started using a heating pad before and after each ride. After several more rides where nothing had changed, we were perplexed. JJ, however, was smarter than both of us.

Rather than continue with his bucking, JJ changed his behavior. Instead of kicking out when I asked for canter, he would instead reach around and gently nip at my left leg. He was telling me, “hey, dummy, it hurts over here and what you’re doing to help isn’t helping at all.”

When we realized that his actions had changed, we re-assessed the situation. Could it be an ulcer, and not back soreness at all? Perhaps! So, we treated for ulcers, and his bad habit immediately disappeared!

Long story short, this incredible horse actually consciously changed his method of communication and tried a new tactic because we simply weren’t getting the message. It worked. WOW.

Example 2: When I arrived at Go With It Farm to hack my new horse on April 1 earlier this year, I wasn’t expecting an April Fool’s Day joke. I tacked up JJ, lead him down to the flat arena, and proceeded with his mandatory pre-ride cuddles. Yes, he makes it known that he requires some snuggles and scratches prior to me mounting up.

This time, however, instead of craning his head around to “hug” me like he usually does, he nipped at my leg. He had never bitten me before, and I thought it was strange.

Just a few short minutes later as we began to trot, I discovered that JJ was lame. Was his little bite his way of communicating that he was ouchy and didn’t want to work that day? I think yes.

If JJ hadn’t told me “no” at our event in April, we both could have been critically injured or worse. Fortunately, thanks to this boy’s smart thinking, he only wound up with a minor ligament issue. Photo by Ainsley Jacobs/Ride Heels Down.

Example 3: After the next few weeks of off-again-on-again lamenes, JJ seemed to be feeling okay enough for us to go show. On April 15, he schooled a warm-up session flawlessly and we had one of our best works ever.

The next day, JJ was a trooper as we got started for dressage in the warm up arena. He seemed just the slightest bit off, but he was forward and willing and went about his job happily. It was getting close to our ride time, so we walked over to the main dressage arena.

Two minutes before we went in, JJ demonstrated a drastic flip in behavior. He went from fine to barely able to stand up. He was dramatically hobbling at the walk, suddenly extremely lame. I immediately dismounted and withdrew from the event. A few hours later, and he was definitely still lame, but his condition had miraculously improved significantly.

What I think happened that day was this: the moment he saw the dressage arena, JJ realized we were at an event and were going to be competing. He knew we would be running. He knew we would be jumping. And he knew we would be going all-out on cross-country. I think JJ sent me a message, loud and clear, that “Hey, mom, I’ve been trying my best for you, but I’m actually hurt worse than you think and this is a BAD idea. Let’s not, okay? Please? We should NOT be doing the cross country jump-y stuff.”

If he hadn’t told me he “couldn’t”, I would have gone out on cross country later that day. And, given that JJ had what we later discovered to be a collateral ligament injury, chances are we would have had a devastating fall on course from his leg giving out, either while running or jumping. That scenario could easily have ended with one or both of us being horribly injured, or worse.

I truly believe that JJ saved both of us from tragedy that day when he communicated his inability to perform.

Example 4: During JJ’s stall-rest recovery, I’d often take him out to hand graze so he could see the world and get a break from the dull monotony of doing nothing. As we neared the four-month mark, JJ had something to say.

JJ loves to jump, and he makes it known. I guessed that he probably missed “working” and being active, and once again this great little horse communicated to me what was going on in his head – I was right!

On one of our walks, instead of sticking to the yummy grass like usual, JJ beelined straight into GWIF’s jumping arena, walked right up to a vertical that was set in the middle, stopped in front of it, bumped the pole with his nose, turned around to look at me, and bumped it again. He then walked me over to a second jump and did the exact same thing. There was no mistaking it. JJ was telling me, “I’m feeling better and I miss this. A lot. When do I get to jump again?”

I couldn’t help but laugh at how obvious he was, and it took a huge weight off my shoulders. My suspicion was validated not long after when Dr. Carter came and confirmed that JJ was sound enough to begin rehab.

Knowing what’s normal for your horse – and what isn’t – is extremely important to keeping you both happy, healthy, and safe. Be fair, ride with respect, and ride with open communication. It’s your job to know when, and how, to listen.