Taking a clinic with a world champion eventer is a great opportunity to learn and develop as a rider. It also provides the chance to ask a question that’s been burning for over a decade.

When I was in college (about 15 years ago), my friends and I loved playing the Lucinda Green’s Equestrian Challenge eventing video game. During the cross country portion, she yells something that sounds like “Betsy!” and we’ve always wondered what she was actually saying. So, when I heard that Lucinda Green MBE was coming to Atlanta for a clinic, I immediately signed up – yes, I wanted to ride with her but mostly I just wanted to get an answer to our question. 😉 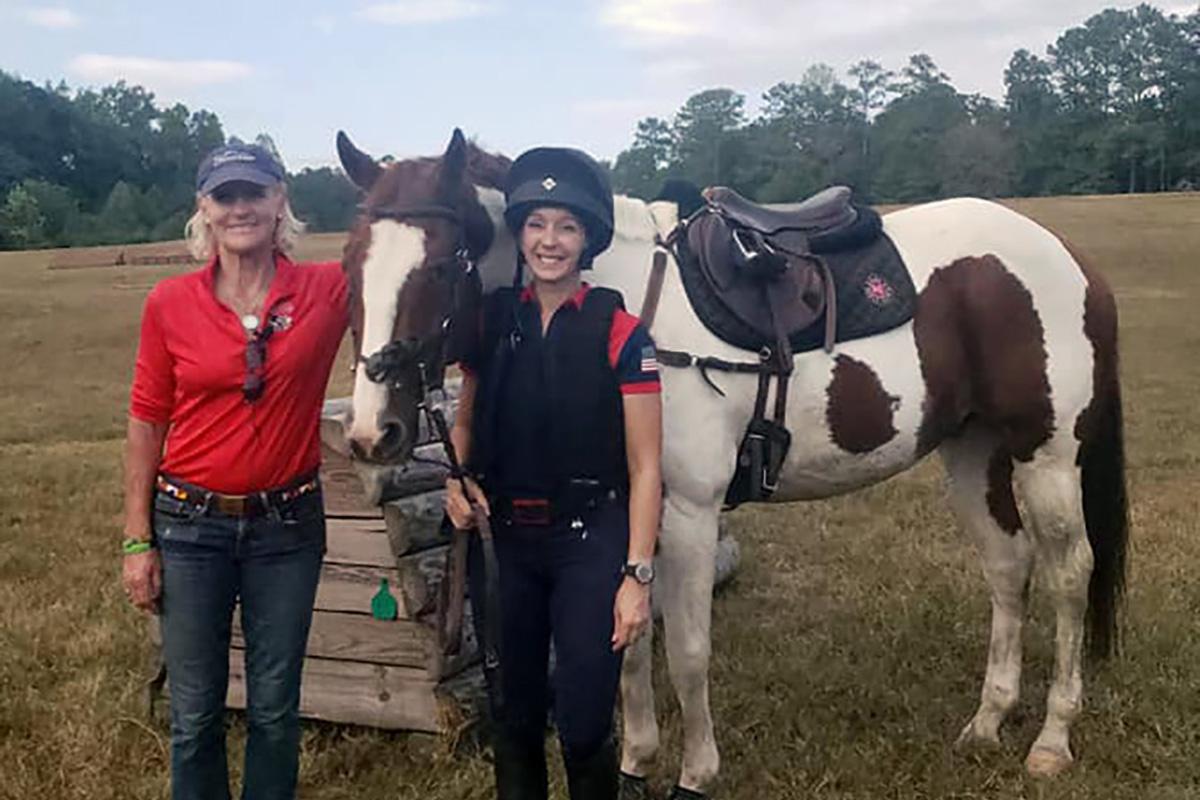 The one and only, Lucinda Green MBE! Photo by Dr. Holly Breaux.

I signed up for the Training group even though I wasn’t feeling confident about our ability to succeed there, but my wonderful coach, Lauren Turner of River Birch Farm, assured me we would be fine – especially since Novice is a bit easy for us now. I had planned to spend the month before the clinic preparing, but, uh, that didn’t happen.

JJ got a week off after the AECs, we did one easy Training CT and then he pulled a shoe and stepped on the clip in our jumping lesson the following Tuesday… so, we never got that last clear jump round that we needed (*sad trombone*) and he got two more weeks off to recover from the inevitable abscess that followed. Poor kid. 🙁

He got another week (so, basically four in a row) while I was gone for a work trip and then we did the best we could to get in some last-minute fitness before the clinic.

Friday afternoon, JJ and I headed on down to the lovely Ashland Farm property where the clinic was being hosted. We unloaded, promptly met a wonderful couple – Kay and Michael – who were both riding as well (Kay in my Training group and Michael in BN) and got ready to have some fun!

Day One was stadium jumping work out in the field so Lucinda could get an idea of how we also handled the terrain. She focused a lot on footwork and communication, tons of tricky slices and bending lines and other challenging courses, and I’m pleased as punch to report that JJ excelled! He’s always great with his feet and is super handy thanks to his stock horse breeding.

At one point, Lucinda even called him a “brilliant little horse” and I have to say, she’s right!

We only had two “oops” moments: the first was a pilot error on my part where I just totally missed the line to a big log and he was surprised at the last second so he (rightfully) stopped and the other involved us smashing a jump pole in half. The latter was a part of an exercise where we jumped in to the center of two jump poles set in a chevron shape, resting on a center cavaletti riser block.

We had tried something similar a few years back and JJ literally bellyflopped/faceplanted and we went down hard (my chiropractor later told me I had likely fractured my hip in that accident) so I had some lingering nerves going into this, of course, but after basically a deja vu of what happened the last time (minus the falling-on-his-face part, thank God) which resulted in the pole getting broken, JJ was perfect through it the next few times. 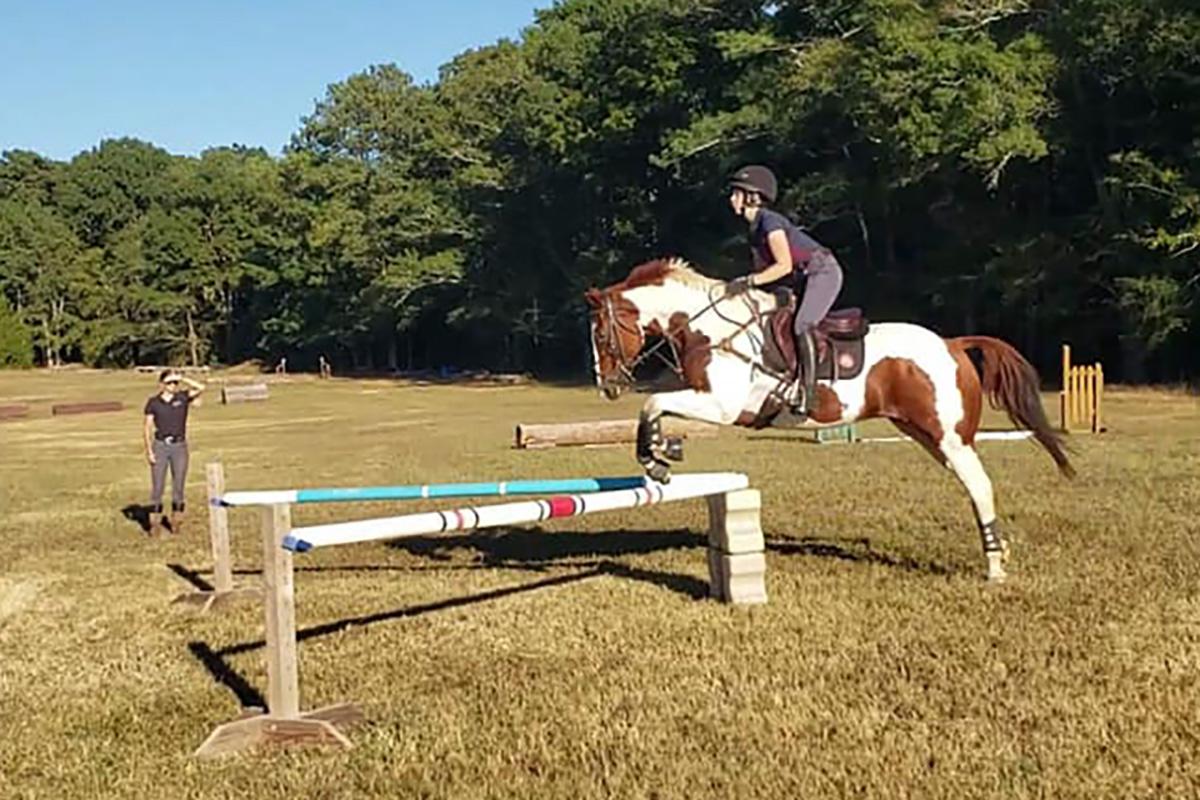 After snapping a jump pole in half, we found redemption! Photo by Dr. Holly Breaux.

Anyway. I had arranged to stay at a nearby AirBNB that night so I didn’t have to drive 1.5 hours home. JJ had his own AirBNB over at Montclair Stables, where Kay and Michael also board their horses. When they realized I was “alone,” they very generously invited me to out to dinner which was a ton of fun, and then followed me to my AirBNB to make sure I was not going to get murdered to death.

Spoiler alert: I did not die. 🙂

I wound up not getting much sleep that night since there were dogs barking (OMGSTFU) but was excited to get on with Day Two of the clinic – cross country!! Our group wasn’t scheduled to go until 3pm, so after I fed JJ and took him on a walk at Montclair, I went over to Ashland to watch the Beginner Novice group go and to have lunch.

After, I headed back to Montclair, picked JJ’s stall, got him and all of his “luggage” loaded back up and we drove the ten minutes back to Ashland. When I got on, I knew he was tired and I was lagging, too… but I guess that helped because neither of us had any nerves!

The cross country portion of the clinic was a total blast. Lucinda had us continuing on the previous day’s concepts. We started walk-jumping a log (which JJ apparently found incredibly challenging and basically refused to do, ugh) and then worked on relaxing up/down banks.

Next, she gave us a few courses to run and he conquered every question effortlessly, including a jump set on the top of a little crest (so, jumping downhill) with a sharp right turn to a preliminary corner. He was perfect, and later when we came through the coffin, I heard Lucinda through my headset make a comment about “that is the only horse to do a proper coffin canter!”

Yay, JJ!! ♥ In reality, my desire for self-preservation is what helps us get that right. Haha.

Overall, it was a fabulous clinic and an absolutely amazing opportunity to ride for Lucinda Green MBE.

Full disclosure: I am an uneducated American and assumed that meant something like “Master of British Eventing” or whatever but I Googled it because I was curious and – turns out – it’s actually an incredibly prestigious title of honor bestowed upon a British citizen that means “Member of the Most Excellent Order of the British Empire.” WOW, impressive!!

Lucinda was a great instructor, firm yet kind, and it was obvious she wanted to give us all opportunities to succeed.

Finally, we finished up at the water complex. Other than a small 6″ step down which doesn’t really count, we had never dropped in to water before. Like, ever. I don’t know how we’ve gotten this far in our eventing without having to do it, but the idea of it made me want to hurl.

I don’t particularly like down banks, and I don’t really want to experience getting dumped in the water, so… yeah. But, I told myself to “suck it up, buttercup” and we gave it a go and guess what? JJ did it like he had been dropping into water his whole life! I was SO proud of him!! It was a lot easier than I expected. 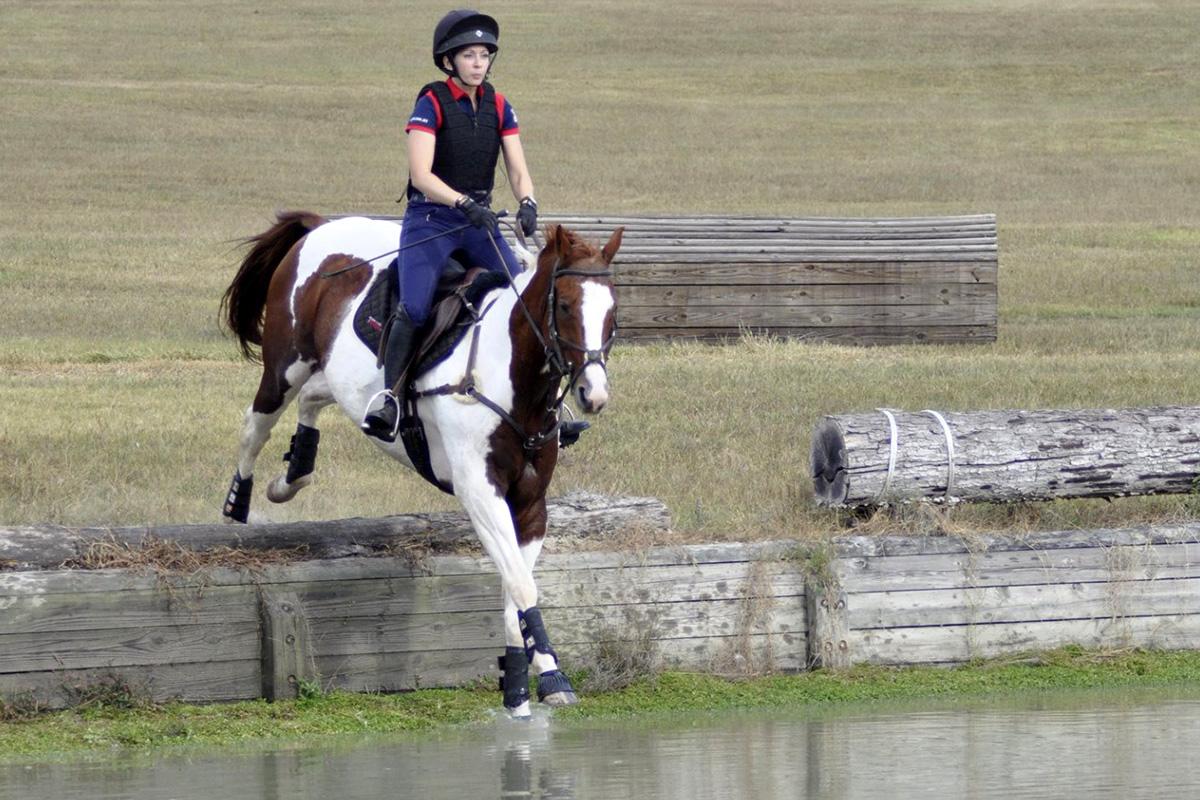 Somehow, I had made it through two days without remembering to ask “the question” so, as we wrapped up at the end of the clinic and she asked if anyone had questions, I jumped at the chance. I prefaced it by saying it was something very weird, pulled out my phone, played a video recording of the “Betsy!” sound clip and asked…

Her response to my 15-year-long mystery? “I simply have no idea. It was most likely an error in the recording studio.” Other riders gathered around, intrigued, and no one else could figure it out either. It was the most perfectly imperfect answer and I haven’t stopped laughing since!

To wrap up an amazing two days of eventing inspiration, on the walk back to our trailers, my friends Beth, Anna Rose and Eileen (who had all come to audit), were having a “picnic” and so JJ and I stopped in for snacks. He enjoyed a glass of rosé, some cheese and crackers, hummus, popcorn and a donut for his hard work and as a thank you for not embarrassing mom. 😉

Oh, and that whole “me not feeling like we were ready to be in the Training group” thing? Yeah, we freakin’ CRUSHED it! Credit goes to JJ and to Lauren for preparing us so well. Thanks, team.

Some mysteries are best left unsolved.