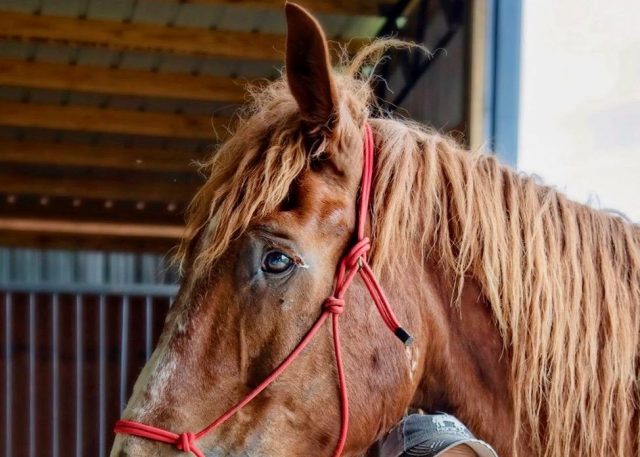 Horse Auction — Slaughter Sale — Livestock Auction = 111 horses on “the block.” $11,000.00 brought 32 of them to safety at Horse Plus Humane Society (HPHS) in June. Philippe and Dane were only two that backed off a hauling trailer on that muggy Middle Tennessee morning.

I was apprehensive when I arrived at HPHS. Owner Tawnee Preisner had invited me to observe the June in-take day. My emotions were tangled as I heard the horse trailers rumble up the drive. Too late to scamper — it was show time.

Tawnee’s crew manned their stations. Each holding area had been prepared with food and fresh water. With naval precision, the corral gate opened – the ramp came down – 11 tiny equine jumbled out like a tumble of stuffed toys and were herded to a large stall in the barn. The larger horses unloaded with soothing efficiency as Tawnee told the team where each horse was to go. Done! 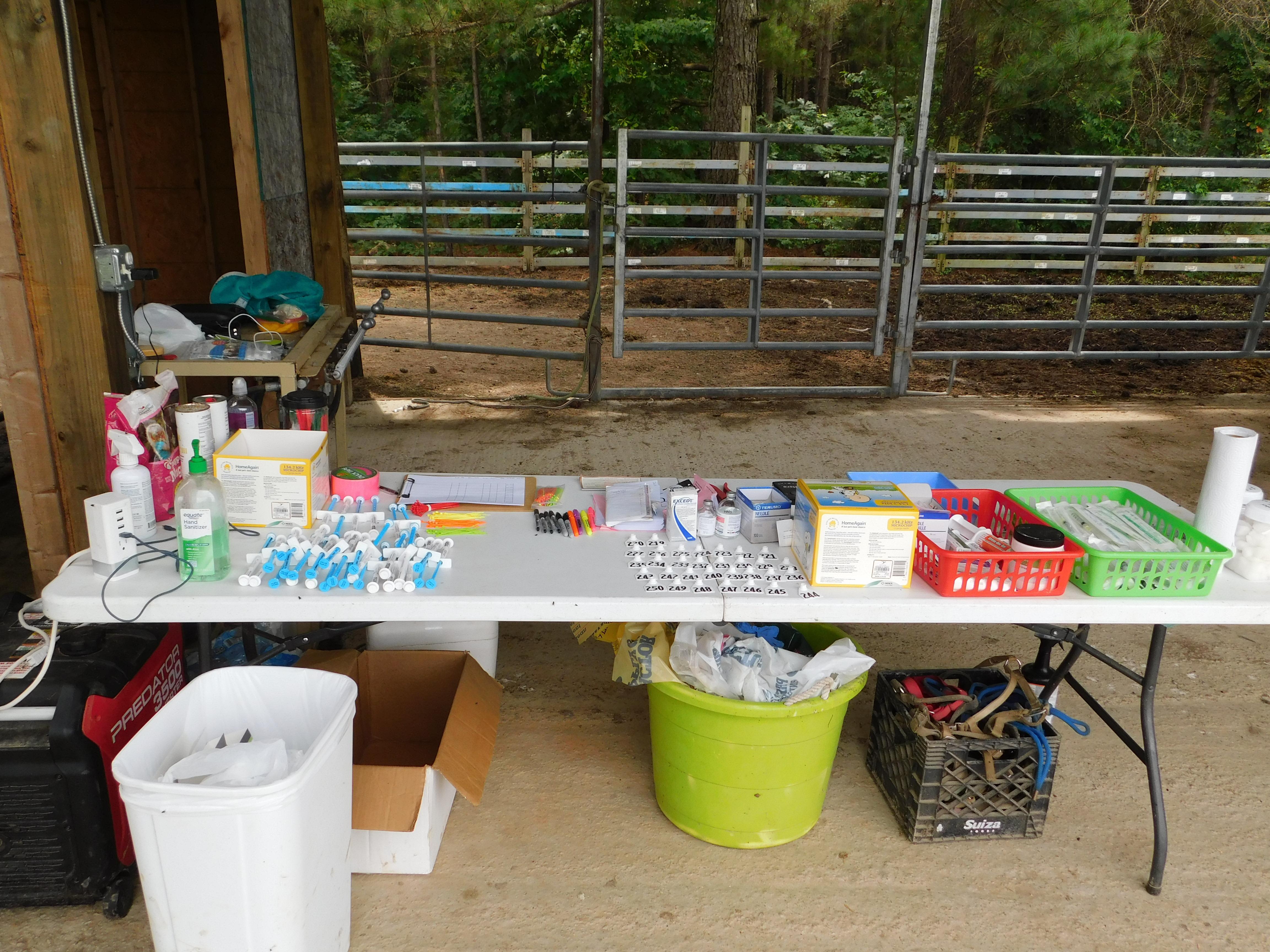 The “Crew” ranged from volunteer teens to adults, a vet assistant and Chloe (Facility Manager/Adoption Specialist). I was amazed at the in-take assembly line. Sales papers matched with new in-take cards. Each horse received penicillin, wormer, 5 Way, rabies and strangles vaccines. Manes tagged with IDs that corresponded with a profile and stats — height, weight, Coggins, gender, age, foot condition, the vetting performed and a “snapshot” personality assessment (training and ground manners) so the farrier and vet would be spared surprises when they came later.

All were scanned for microchips. If no chip was found, the horse was chipped. Some horses had chips but lacked registration. I learned that some of these might be “test horses” that could have been used for some sort of chemical testing then deposited at auction. If a chip is found the number is noted for the new owner to use to register in their name. HPHS tries to track down the registered vet clinic, owner, etc.

The minis/small ponies/baby donkey: The lack of hoof care on one little guy was a shock for me. His hooves were curled up elf shoes. Without attention, the hoof could grow into the horse’s leg. He was blind in one eye. Another mini was severely foundered. Prognosis not good; he was guided to holding for further evaluation. 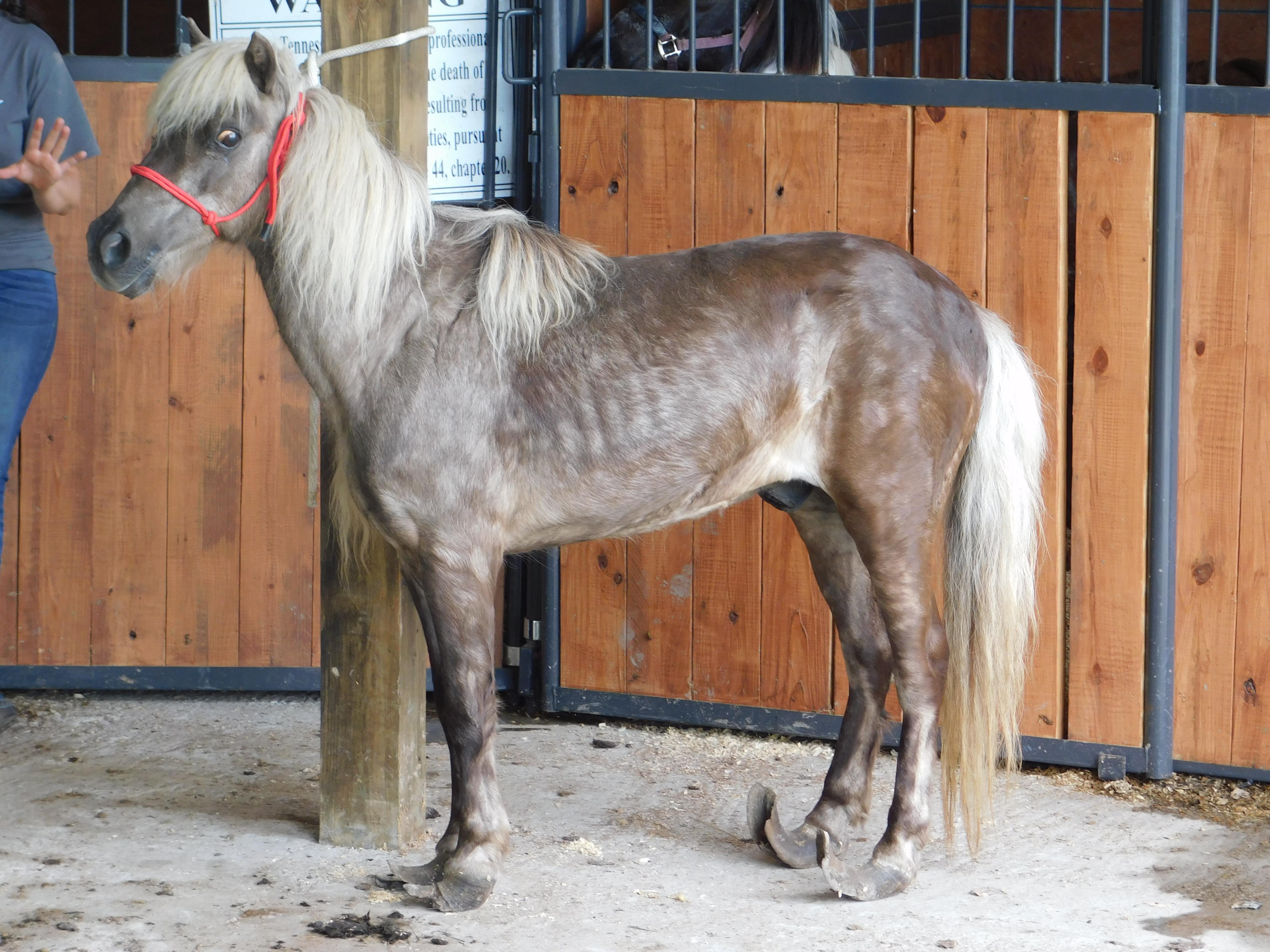 Six weeks later, two of the 11 had to be euthanized. Nine of the little guys were thriving. “Elf- shoe’s” (now Larcan’s) feet are healing and his eye was successfully removed. He now radiates a charming personality and is pending adoption as a companion horse at a boarding and lesson facility.

Tawnee shared that she grabbed the minis/ponies/donkey because: “They auction for as little as $5-$200. I can vet them and send them to a mini rescue in Oregon that succeeds in placing them in homes in California where they are prized as ‘designer horses.’ Small equine sell at action because they can be squeezed under the bigger horses to ship to Mexico. More flesh into the truck.” 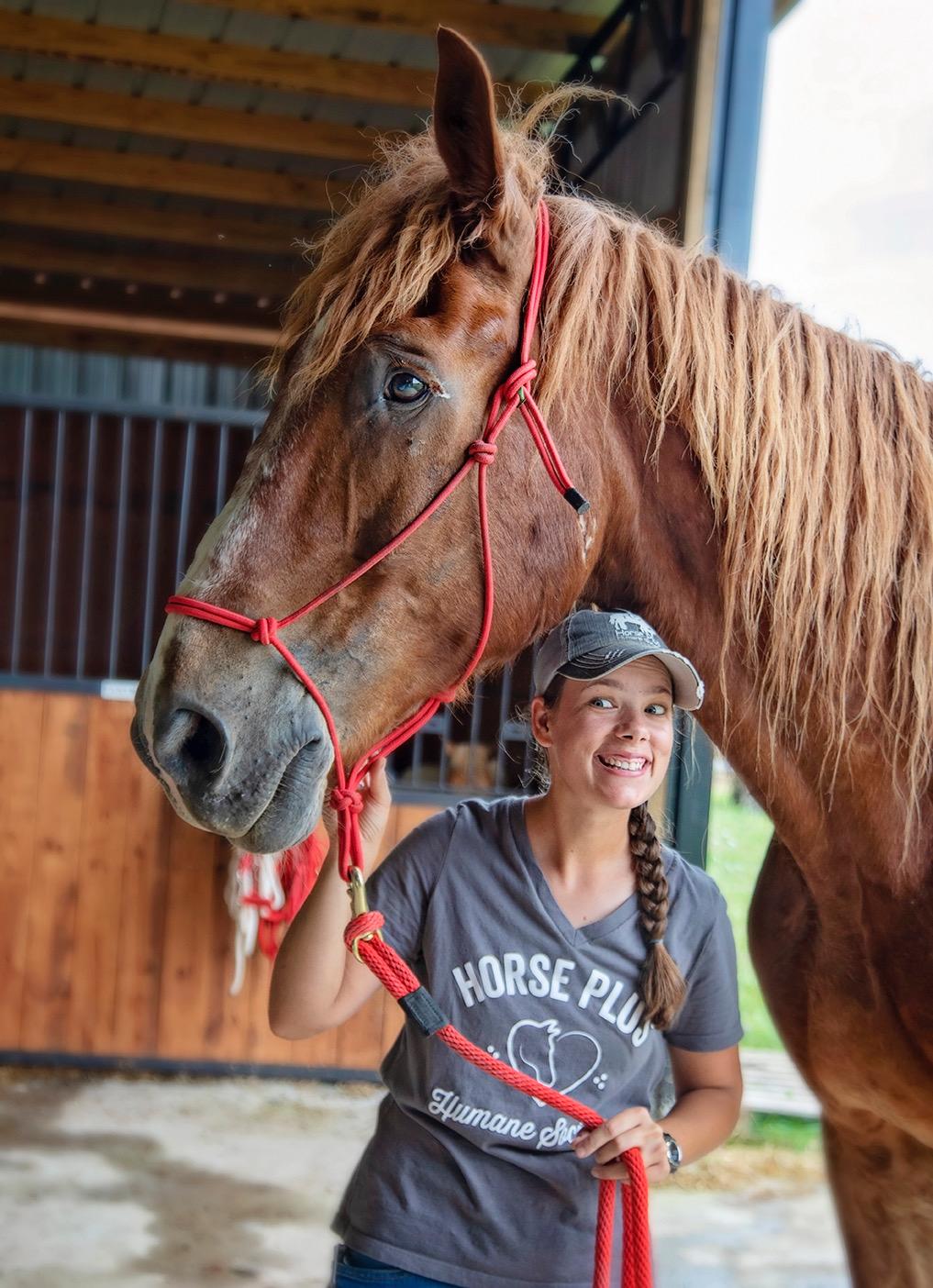 Tawnee said that when she started to rescue in 2003 in California she only looked for adoptable horses — horses with a use. In 2007, she “changed [her] view of the purpose of rescue.” She now also rescues the “no hope” horses to save them from the fear and trauma of transport and slaughter.

Tawnee “steps in to be the responsible person.” She offers free euthanasia to horse owners who need assistance in end of life for their horse(s) in hopes of keeping a potentially unadoptable horse from the slaughter experience.

Tawnee considers the financial resources that a horse in dire shape will take. “Trying to bring the hopeless back to health takes resources away from other rescues.” Yet, saving a family pet from the horror of slaughter is worth the expense and effort to Tawnee and her team.

And maybe, “We might be able to help a horse that is a bit worse for wear – let her finish her life as a companion riding horse with a custom fit saddle or a successful horse for a child.”

“If I see two horses with an obvious relationship — bonded – I’ll take both. We meld them in with other horses — see if they join the herd. If yes, we wean the buddies apart.” 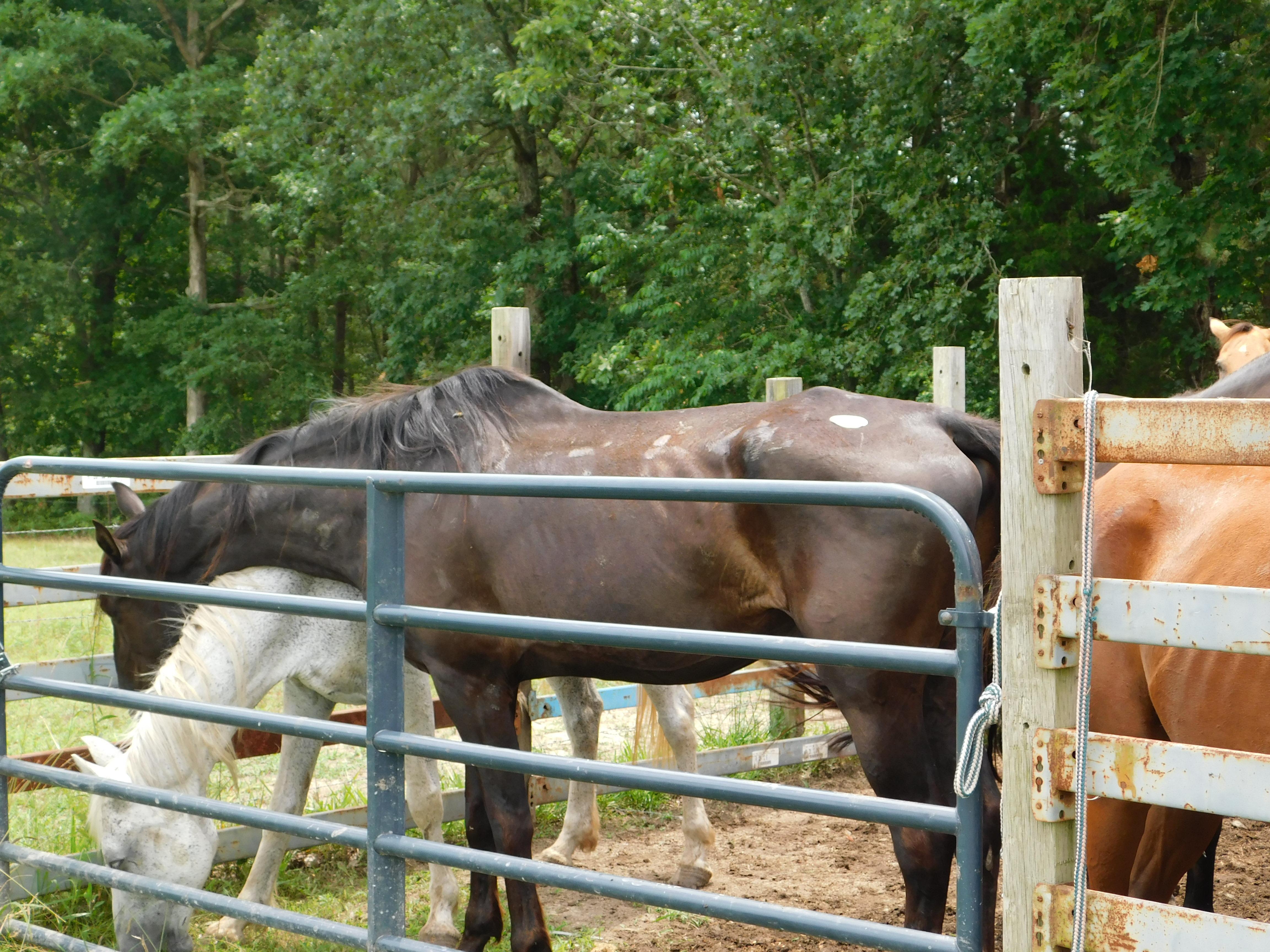 Tawnee looks for horses that exhibit some training. “My saddest experience at auction is seeing an obviously trained horse that expects someone to lead it. They don’t know what to do. They just stand there. They don’t get the idea of the chutes, ramps and trailers without guidance from a human – to be led in. They can get beaten to move them in to the slaughter trailer.”

Tawnee tries to save those horses from what would be the trauma of the next leg of the dead-end journey.

The Reality of Auction and Feedlot Rescue

Tawnee explained that almost every horse gets sick within a week of rescue auctions or feedlots (depression, weight loss, health issues . . . ). Not all have had regular health care. She shared that: “The feedlots often feed powdered steroids to give the impression of weight – beef a horse up. The body will crash after the steroids dissipate. I have seen it take six months to recover from the feedlot experience.”