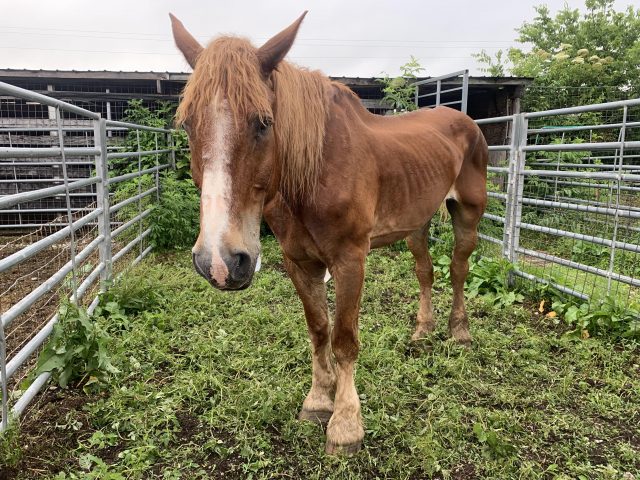 In the second article in her series, Candace Wade looks at two more rescues: Philippe, a Belgian, and Dane, another ex-Big Lick Tennessee Walking Horse. 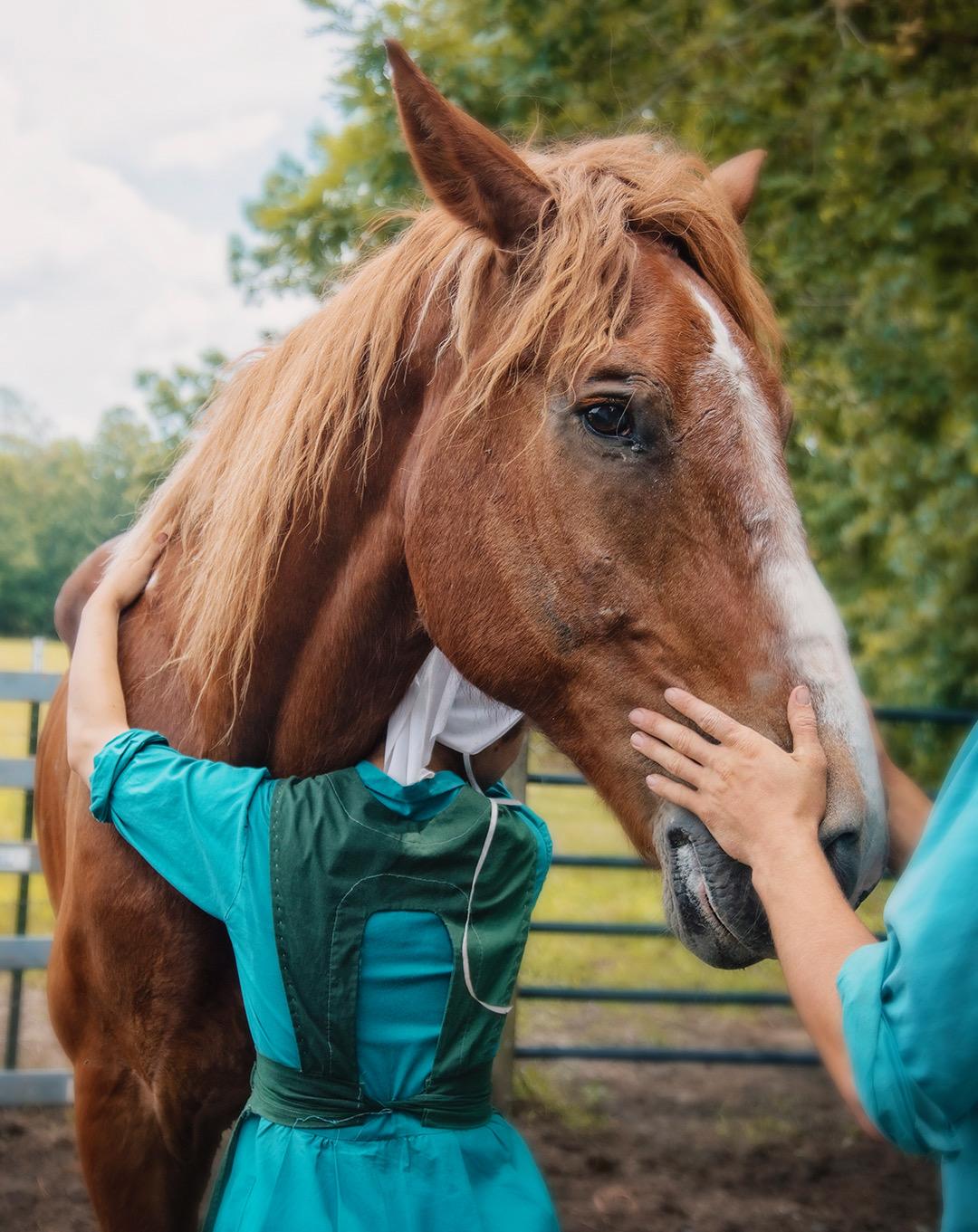 June 19th — In-Take Day at Horse Plus Humane Society (HPHS). I felt like an equine Richard Engel as I donned my emotional flak jacket to observe the horses purchased from “the auction” (aka slaughter sale) by HPHS owner, Tawnee Priesner. One hundred eleven equine stood for auction — HPHS carted 32 home. Okay, 11 were minis.

The receiving team was composed and prepared to unload as the two trailers rumbled up the drive. I watched horse after horse glide off the ramp into the holding pen where troughs were filled with fresh water. Two impressions struck me — how calm the process was and the sight of prominent ribs, skin issues and wounds.

Thirty-two horses being shuffled about was overwhelming for me. I focused on two.

Auction # 2978 – a golden Belgian Draft gelding. Stoic, he waited his turn for a drink. Body Score of 3 (1 is emaciated — 9 is obese). I asked Chloe Hancock, the Shelter Manager and Adoption Specialist, about the big boy. “He’s been named Philippe by the Facebook public. He is super sweet. Even though he looks like an old fella he is only 10 years old!” 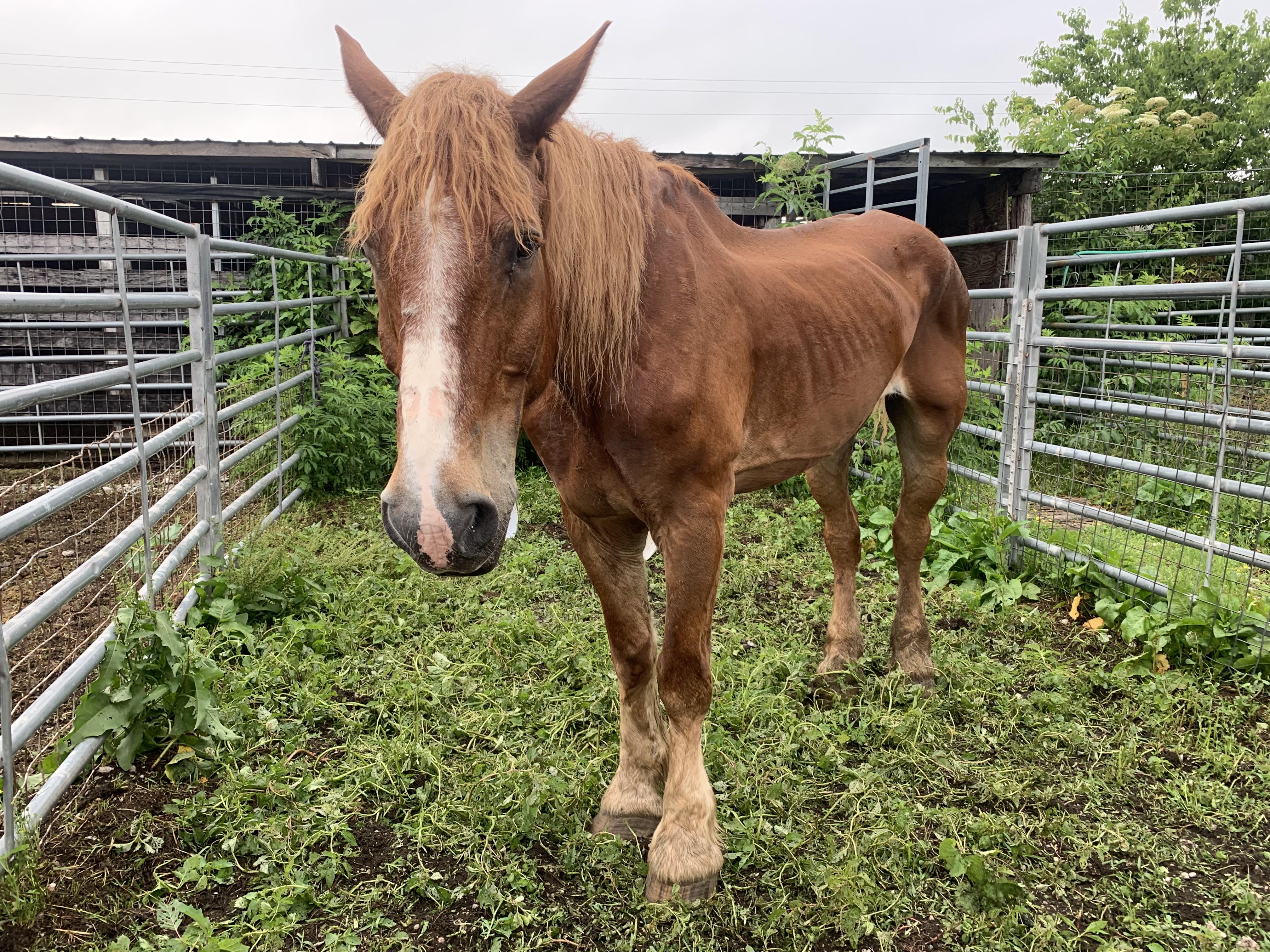 I checked on Philippe a week later. Chloe shared that he was much improved after a course of IV antibiotics and oral pain and inflammation medicine. She added: “He needed medicine due to a large hoof abscess that had caused his hoof to crack two inches from the heel and ran all the way up the hoof wall to just shy of the coronet band. He is getting around much better and seems happy. We should see improvement in his weight soon.” Adoption for Philippe? Chloe said, “Possibly. We’ll have to give him time.”

Auction #2560 – a black ex-Big Lick Tennessee Walking Horse gelding. His name is now Dane. He is 19. Dane was pictured in stacked shoes in a “TWH Internet Yard Sale” ad post on March 16, 2014. His show name was Pushers Evil Eye. The ad boasted “6 World Grand Champions in his bloodline.” From “yard sale” to slaughter sale – the in-between is a mystery. 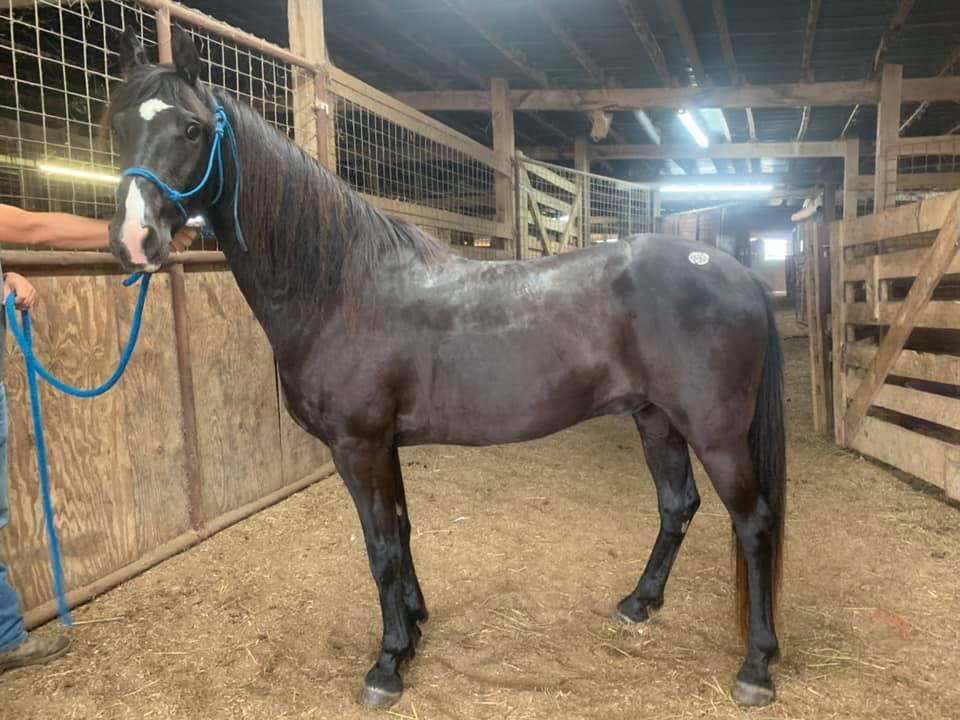 Tawnee recounted, “He was so beautiful. When he came into the ring I had to bid on him. The auctioneer did not see my last bid. I had lost him. I felt certain if he wasn’t shipped to slaughter, somebody would put stacks and chains on him and use him in the Big Lick racket. I had to repeat, ‘You can’t save them all.’”

Later, Tawnee saw “that beautiful horse” in the middle of a huge hauling trailer. She crawled up the side and “told the person loading the horses that I wanted to buy that horse.” He refused. Tawnee persisted. The man agreed to sell the horse. “But he tried to tell me the one I wanted was a different horse.” Tawnee insisted. They agreed on a price — slightly over what he had paid. “I had to buy that horse. As we pulled him off the trailer, I was thankful that he was going to get an amazing chance at life.” 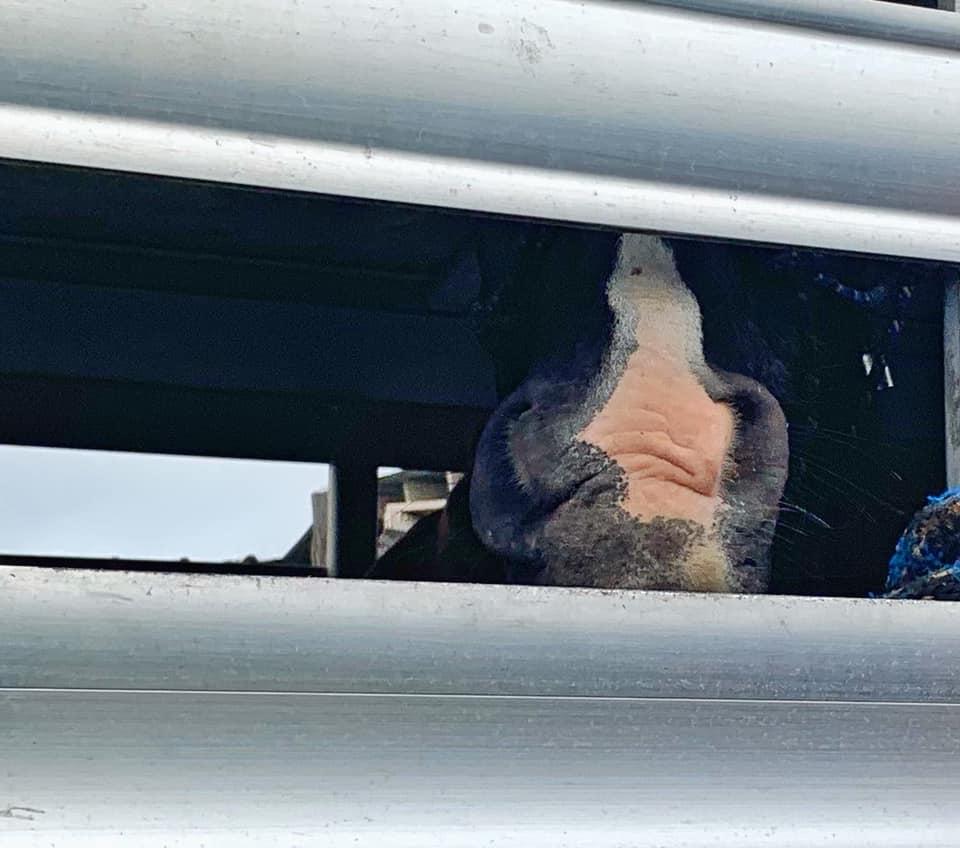 Dane’s nose on the trailer at in-take. Photo by Kisa Kavass.

Tawnee said Dane was not in stacks at the auction. Per Tawnee, “I don’t see horses in stacks and chains as I did before.” Tawnee did see indications that stacked shoes had been recently removed from Dane and that his hooves had been trimmed short. She added, “Many of our ex-Big Licks don’t know how to be horses after years of stall confinement. It can take six months of pasture time with other horses to acclimate.”

Dane is doing well though. “He is super sweet; he comes to me from the pasture and just wants love,” Chloe offered. “However . . . we put him in a stall for a moment and he flipped to nervous, high-strung, swaying and distracted.” Chloe considered that the stall had triggered a memory of past stall confinement and the training devices he wore when he was a show horse. Dane calmed as soon as he returned to the pasture.

Chloe will wait for trainer evaluations of both Dane and Philippe and for them to complete HPHS quarantine before they will be available for adoption.

How Tawnee Chooses Her Rescues

Tawnee shared that 80% of the horses she buys at auction in Tennessee are TWHs. “In Tennessee, gaited horses are everywhere, but they can be rare in other states. Walkers are prized as special in California. I can get them adopted there. We have had to put a lot of ex-Big Licks to sleep because their bodies can’t hold up from the stress. They literally fall apart. We sometimes purchase knowing a horse won’t make it. But, all are treated with care and given a chance.”

And why Philippe? “I chose the draft because . . . he just needed help.” 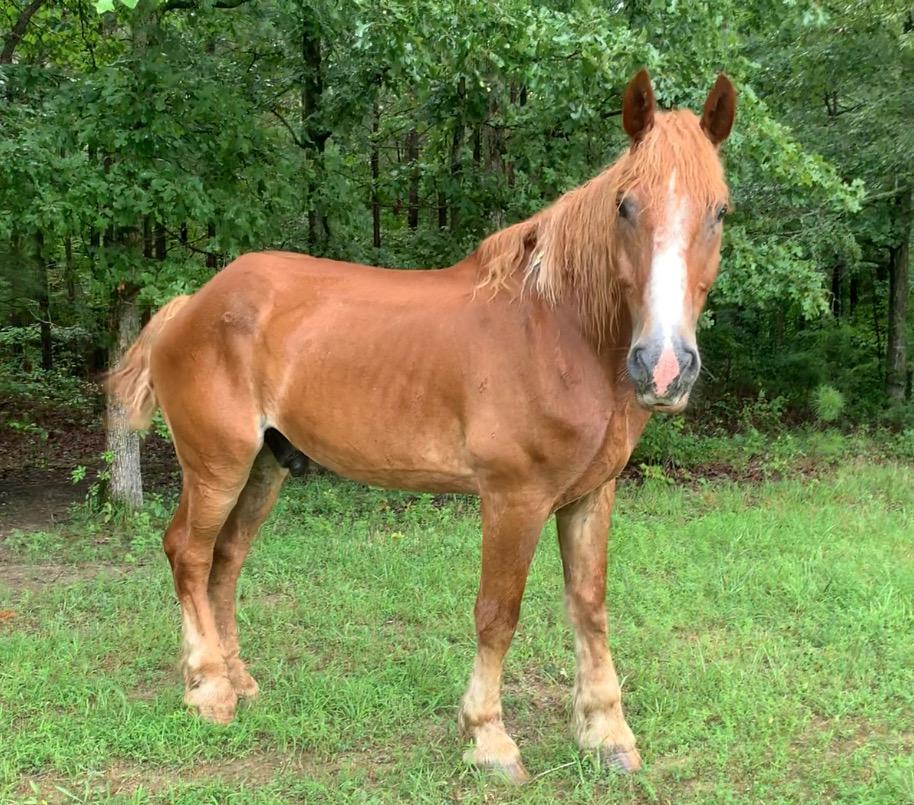