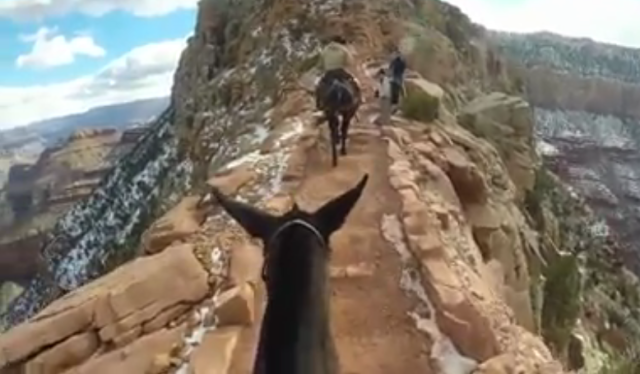 Welcome to the 2017 Horse Nation Readers’ Choice Awards! Vote for your favorite helmet or drone cam video of the year, presented by World Equestrian Brands.

For the World Equestrian Brands 2017 Helmet/Drone Cam of the Year, we’re looking back at the five most-watched videos in our Wednesday morning column, which highlights an awesome rider/driver perspective via video or a unique look via drone. Check them out one more time and then vote in the poll below! Our Readers’ Choice Award winners will be announced on Friday, December 29.

Published on February 15, 2017: “For someone who is intensely afraid of heights, there’s a whole lot of nope in this video, despite the incredible views. But even for the average thrill seeker, riding a narrow path like those found on the Grand Canyon trails at such an altitude would take nerves of steel! Could you be brave enough?”

Published on March 1, 2017: “Emit, affectionately known around Wallace Eventing as “Baby Mustang,” was rounded up in Oregon as a two-year-old and selected by Elisa Wallace. His palomino coloring and build aren’t necessarily standard for what most people imagine when they think of the American Mustang, so he serves as a great ambassador for his breed and shows people just what a mustang can look like — and more importantly, what a mustang can do. Emit tackled his first cross-country course in the Novice Horse division at Rocking Horse Winter II Horse Trials in Altoona, Florida. Watch his adorable golden ears prick forward for each new challenge and flick back to listen to Elisa’s encouragement all the way around.”

13.3 hands of pure badass! This pony knows no limits and I plan on always encouraging that way to live life! I'm honored to be his jockey while his owner Carina studies for finals! Way to finish second place in the prelim Digby! You're a legend! #wonderpony #livelifelikedigby

Published on August 2, 2017: “It was [Misty of Chincoteague] that helped jettison the Chincoteague ponies into international superstardom — while Misty herself is long gone, the legacy her life and story left behind, even if a few creative liberties were taken, still lives on. The annual Chincoteague pony swim and auction to benefit the Chincoteague fire department is perhaps even more popular than ever. This year, we’re treated to a drone cam view of the dramatic swim across the channel from Assateague to Chincoteague, aided by the “salt water cowboys” and a few guide boats.”

Published on September 20, 2017: “Drones are one of those things that either make equestrians really excited to see what kind of cool video they managed to capture or really ticked off that your weird neighbor is spying on your property and spooking your animals again. If you happen to fall into the latter camp, fear not — because this pasture of horses just exacted a little karmic revenge on this would-be drone pilot, evening the score if you’ve been on the bad end of a drone flyby.”