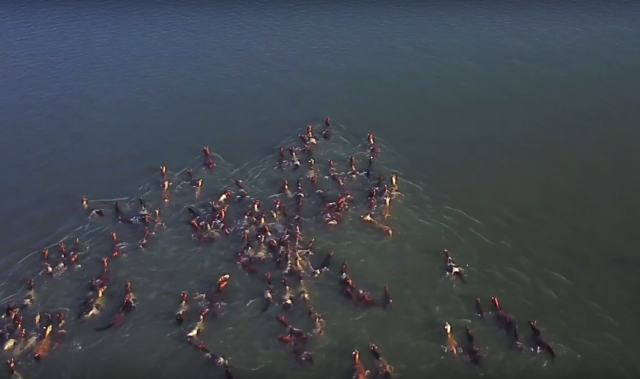 The world-famous Chincoteague pony swim took place on Wednesday, July 26. Not one of the lucky few to witness it in person? We’ve got the next best thing.

I’m confident in assuming that a majority of our readers were raised on a steady diet of Marguerite Henry — I was always more of a King of the Wind gal myself, but I did read (and re-read) Misty of Chincoteague and Stormy, Misty’s Foal enough times to know that the Beebe siblings had a pretty rocking set-up: galloping around the then-lightly-developed Chincoteague Island and the essentially untouched Assateague Island on ponies trained by their grandfather, watching the annual famous pony swim and generally living the dream.

It was these books that helped jettison the Chincoteague ponies into international superstardom — while Misty herself is long gone, the legacy her life and story left behind, even if a few creative liberties were taken, still lives on. The annual Chincoteague pony swim and auction to benefit the Chincoteague fire department is perhaps even more popular than ever.

This year, we’re treated to a drone cam view of the dramatic swim across the channel from Assateague to Chincoteague, aided by the “salt water cowboys” and a few guide boats:

If Misty could see us now.

Once on dry land, the ponies rest for about 45 minutes and are then paraded through town before hanging out in holding corrals, with selected foals auctioned to the public. A few foals are marked as “buybacks” every year and return to the island with the herd after raising funds for the fire department.