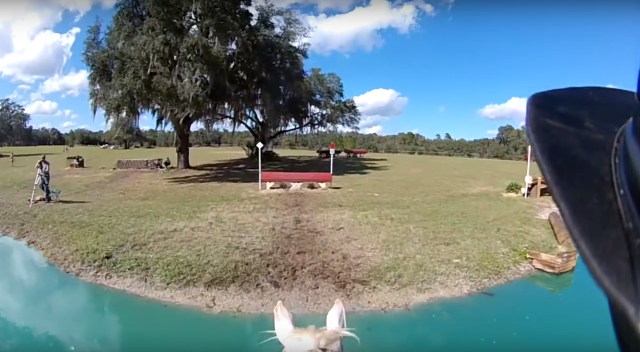 Hey, Elisa Wallace fans — there’s a new mustang moving up the ranks in her string! Come along for “Baby Mustang” aka Emit’s first cross-country trip of his career at Rocking Horse.

Emit, affectionately known around Wallace Eventing as “Baby Mustang,” was rounded up in Oregon as a two-year-old and selected by Elisa Wallace. His palomino coloring and build aren’t necessarily standard for what most people imagine when they think of the American Mustang, so he serves as a great ambassador for his breed and shows people just what a mustang can look like — and more importantly, what a mustang can do.

Emit tackled his first cross-country course in the Novice Horse division at Rocking Horse Winter II Horse Trials in Altoona, Florida. Watch his adorable golden ears prick forward for each new challenge and flick back to listen to Elisa’s encouragement all the way around:

Good job, Emit! Congratulations to the Wallace Eventing Team. We can’t wait to see where Emit will go next, both as a competitive eventer and as a mustang ambassador. As Elisa Wallace has showed us with her multi-talented string of mustangs, anything is possible.

Save a horse — ride a mustang!