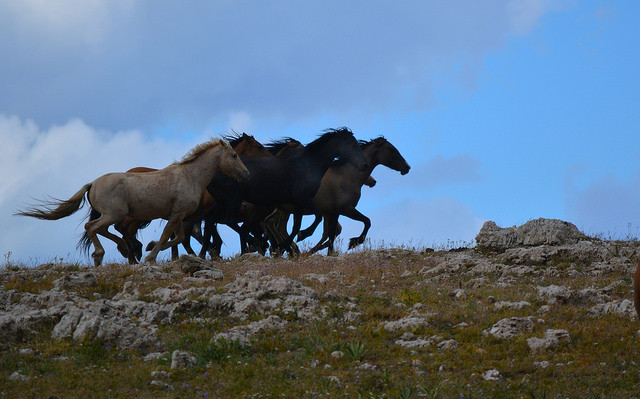 Horse Nation spoke with Advisory Board volunteer Ginger Kathrens, who voted in opposition to the controversial proposal calling for the euthanasia or sale of 45,000 mustangs currently in BLM holding facilities.

The National Wild Horse and Burro Advisory Board consists of representatives from both the public and multiple interest groups, serving to discuss key issues and help advise to Bureau of Land Management (BLM) regarding the management of wild horses on public lands. In its meeting at the end of last week, the Board visited Herd Management Areas, or HMAs, to observe wild horse ecosystems at work. The Board also deliberated over the pressing issues of mustang management across the American West, culminating in a proposal that reads as follows:

Follow the stipulations of the Wild Horse and Burro Act by euthanizing or offering for sale without stipulation all suitable animals in short and long term holding facilities.

This radical proposal has already been met with massive waves of public outcry as news rippled across social media on Friday, September 9. To help readers understand the issue, here are some key facts and figures, as stated by the BLM:

The proposal for sale or euthanasia was voted in favor by seven of the eight members of the board. The sole vote in opposition was cast by Ginger Kathrens of The Cloud Foundation: Kathrens has spent an estimated 12,000 hours observing and documenting wild horses all over the west, most famously the Pryor Mountain herd on the Wyoming/Montana border. Her work in chronicling the mustang stallion Cloud and his social band and family in a PBS documentary series has brought the mustang crisis to a personal level for Cloud’s fans and followers, and The Cloud Foundation has worked hard to educate the public and encourage the public to get involved in mustang advocacy.

Horse Nation spoke with Ginger Kathrens to learn more about her reasons for opposing the proposal and her thoughts on alternative solutions.

HN: The concept of euthanizing 45,000 horses is horrific — that aside, what was your reasoning for opposing this proposal?

Because I believe that healthy horses shouldn’t pay the price for government mismanagement that’s gone on for decades. There have been alternatives to manage horses on the range for years, and they were not being utilized. Some herds right now are already able to do this: the tools available are used to manage their numbers on the range and only require small or even no roundups at all. The Pryor Mountain herd is one example.

Unlike other hooved mammals, horses have a unique social structure — the males don’t just come in and breed and then leave; the stallions stay with family bands in social units. The helicopter roundups shatter these social bands: families are broken up, the remaining horses restructure socially and then there’s a spike in reproduction accordingly.

HN: Can you could pinpoint one turning point where you feel the BLM went wrong in managing wild horses?

They were never managing the range. In 1971, the Wild Horse and Burro Act was passed and the BLM was charged with managing the herds and the range. In 1972, 1973, they did their censusing of wild horse populations, and in 1974 they completed their reports on where they would set up management areas. In 1978, they reported 54,000 horses living in 339 herds on management areas. A recent count reports 179 herds.

The BLM set the Appropriate Management Level [AML] at 26,715 and no one really seems to know how that number was determined. It appears to be a low number based on what was already out there at the time.

Now, we have herds that are too small to maintain genetic viability — Dr. Gus Cothran of Texas A&M did research that found that you need around 150 members for genetic viability, and most of the herds are not even at that bare minimum. Now, there are a few herds that are far larger; there’s a herd in Nevada of over 1,000 animals living on a million acres.

The cheatgrass crisis has hit everywhere. Cheatgrass is an opportunistic invasive, and the only way to get rid of it is by tilling up the earth and replanting. The BLM has described that the crested wheatgrass is the only plant that will out-compete cheatgrass. Of course, you can only till and replant in certain areas — that won’t work in rocky, rugged areas.

HN: What would you offer as an alternative solution to the current crisis?

There are certainly much more humane alternatives for sure — we need to use PZP! Using the PZP vaccine involves a lot of hard work but it’s been proven to be effective. The Pryor Mountain herd currently has zero population growth through the use of PZP. Rounding horses up with helicopters is easy and PZP is going to involve much more work.

At that point, PZP needs to be used aggressively on the existing wild populations to really cut back on births so we can achieve zero population growth. PZP-22 has a multi-year factor.

Yes, it will take a lot of hard work — it will take a lot of volunteers to be out there in the field. It’s easy to push a pen and paper around at a desk all day and it’s hard to go out there and document where the horses are, who they are, how many, where the food and water sources are. But we have over 100 volunteer trained darters — myself included — who are not in places they need to be because the BLM has not used the resource.

HN: One of the big criticisms of PZP for population control is that there are horses in inaccessible places where they cannot be routinely darted.

Yes, there are — I spoke with some of the people involved in a herd removal in a rugged section of Nevada and they know there are still horses out there. That would be a good place to repatriate a gelding-only group from short-term holding.

There are many places where it’s going to be difficult, but it’s always possible — the key is knowing where the horses are. For example, in the Pryor herd, at certain times of the year we know exactly where the horses will be because they won’t be on top of the mountains in the snow. It’s going to require a really solid knowledge base — we will need to build a database on the horses themselves, documenting what they look like, their markings and identification, as well as the geography of an HMA, where the water and feed is — we can use technology like drones, trail cameras. In areas that we can’t easily access the horses, we can use bait and water traps and use small dart guns.

It’s not going to be easy, but it’s possible.

HN: If you’re recommending repatriation of horses from short-term holding, do you believe that overgrazing is an issue on the range?

Overgrazing comes from livestock. The horses have become the scapegoat.

We visited an HMA that hadn’t had any livestock on it for eight years — part of it looked good, part of it not so good. The cheatgrass came into the area because it had been overgrazed by sheep. I’m glad we got to look at that particular area, because it let me see the extreme and compare it to the normal.

But this “the sky is falling and the horses are taking over the range” mentality is not correct.

HN: Let’s talk about the Advisory Board proposal — do you believe that there’s a possibility this recommendation could come to pass?

Absolutely I do. A few years ago there were secret meetings taking place in the BLM about how many horses they could kill annually. These only came to light thanks to the Freedom of Information Act and it somehow never got the press coverage I felt it deserved. Some of those people are still in high-level positions at the BLM.

This recommendation could come to pass because it’s easy. It’s not easy to go out there and actually euthanize those horses, no — but it’s an easy solution when compared to the hard work it would take to resolve the crisis through other means. Now, there are wonderful people in the BLM, don’t get me wrong — but there are plenty of others who would be willing to carry that out.

It’s still a difficult thing to do — no one wants to go out and tell their employees to go euthanize thousands of horses.

HN: How do you think it came to this point — that this recommendation is even a feasible option? Is this a power-play move to try to leverage more funding?

I still don’t understand it. Congress would have been willing to give the BLM more money — or so I hear from my Congressional representative on the Appropriations committee.

No one discussed this recommendation with me prior to introducing it. The subcommittee discussed it prior for some time, but when it was introduced at the board meeting I was fairly rattled.

It still doesn’t have to come to this: it’s possible to do on-the-range management. It will take real censusing, mapping, going out there. I’ve been working so hard to get volunteers out there on the ground. All of these tools have been available for a long time but never utilized.

HN: Do you think this recommendation might work as a scare tactic to encourage more public involvement with mustang management?

I certainly hope so! There was a massive public pushback on the proposed mare sterilization project and that project was canceled just recently. There’s going to be even more public outcry about this proposal.

I always encourage people to do something positive: it doesn’t do any good to just scream and yell on social media. Get out and volunteer, if you can. If you can’t, write a politely-worded letter to your government representatives. Do something positive and we can affect change.

Horse Nation also spoke with Ben Masters, who voted in support of the Advisory Board recommendation. Click here to read the Q&A.

Weigh in, Horse Nation: how would you propose to resolve the mustang crisis? Let us know in the comments section.