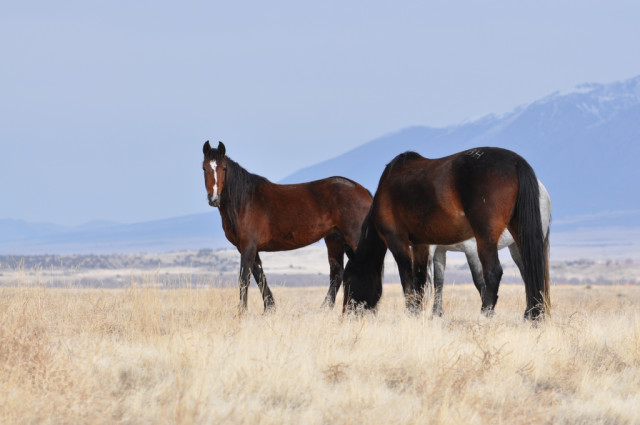 The PZP vaccine is already changing the ways mustangs are managed in the west — but only on a select few herds. We spoke with Dr. Jay Kirkpatrick to learn more.

Members of the Onaqui herd, which will begin receiving the PZP vaccine. Bureau of Land Management – Utah/Flickr/CC

Dr. Jay Kirkpatrick, founder and senior scientist the Science and Conversation Center (SCC) of Billings, Montana, kindly answered our questions about PZP and fertility control in wild horses across the country. The 501(c)3 non-profit organization produces the vaccine for ongoing conservation efforts all around the world. The SCC’s mission is to develop and apply fertility control to wildlife populations as an alternative to lethal control and removal.

How does PZP work?

PZP stands for porcine zona pellucida. The zona pellucida is the non-cellular membrane around all mammalian eggs and includes “molecular keyholes” which allows sperm of the same species to attach and fertilize the egg. The PZP vaccine injects proteins from pig eggs into a mare; the mare produces antibodies to destroy the vaccine. Because the pig proteins are similar in structure to the mare’s own sperm receptors, her “molecular keyholes” are also blocked by her antibodies and her eggs cannot be fertilized. The vaccine is a reversible contraceptive; it does not render the mare permanently infertile.

The proteins are extracted from pig ovaries, a natural by-product of the pork industry. Many well-funded labs have attempted to synthesize the proteins but have been unsuccessful.

At what scale is PZP currently being used on mustang herds?

We have 35 ongoing horse projects in North American and Europe — it’s not just the BLM. There are an estimated 100,000 unwanted wild horses on Navajo lands right now, for example.

This might be a difficult question to answer, but what’s the estimated cost of the current BLM plan of rounding up mustangs and keeping them in holding facilities, versus administering PZP?

That is a hard question to answer. The USGS estimates that if PZP were to be used wherever it could be — because it can’t be used everywhere, some of the herds are just too big — it could save about $7 million. There are a few factors that affect that cost — volunteers are cheaper, of course, than a salaried BLM employee. The reservations and horse sanctuaries that need the vaccine the most don’t have that kind of budget.

PZP costs $24 per dose, which is about 60% of the cost of production — the SCC loses money on every dose that goes out the door. Last year we gave away $20,000 worth of the vaccine.

So why isn’t PZP more widely used? It seems like a more logical solution than the current model by the BLM.

There’s a cultural hangover in the west — I’ve been told, “no, we don’t do things that way, we use ropes and horses.” It’s also an economic issue: there are a few families in the west that are contracted to make millions on the wild horse roundups. Concerns have been raised over taking away those families’ revenue. And of course, the politicians follow the economy.

There’s also a polarization effect: wild horse advocacy groups originally opposed the use of PZP. Eventually, they came to realize that they had three choices: they could watch the horses starve to death on the range, they could continue to see them rounded up and removed, or they could start to use fertility control. They saw that they really only had one choice. And because the advocacy groups now support the use of the vaccine, the BLM opposes it — they don’t want to agree with what they perceive to be radicals.

Horses are herded by helicopter in an emergency gather due to drought conditions. Bureau of Land Management Oregon and Washington/Flickr/CC

If public land were no longer open to the grazing of livestock, would we be able to solve part of the problem?

Public grazing isn’t the problem: only 1-3% of America’s beef cattle, for example, are grazed on public land. The problem is that we no longer have any free-roaming wild horses in this country: they are blocked by fencelines and man-made barriers. The horses cannot migrate to avoid natural challenges, like blizzards or drought. Trapped in these smaller spaces, the horses will wreck the range by overgrazing and starve to death. I watched a herd die 38 years ago, trapped in a blizzard, 400 yards from natural safety, blocked by a fenceline. That’s just the reality of the situation: the fencelines aren’t going to go anywhere.

Critics of PZP state that the vaccine causes higher incidents of out-of-season births.

Those statistics are counted only in treated herds. You’ll find exactly the same results in untreated herds, but nobody is counting those.

What no one mentions is that foals born out-of-season to treated mares have a greater chance of survival than foals born out-of-season to mares who haven’t received the vaccine. That’s because treated mares are more robust, in better health, and much better able to take care of a foal through the challenges of winter. Producing a foal every year taxes a mare’s body; when she is producing one foal only every few years the mare is much healthier.

Assateague Island is a great example. Prior to the use of PZP on the pony herds, no mare ever lived to the age of 20. The mean age of death in the wild was seven years. We’ve been using contraception on the island for 30 years: now the mean age of death is 26 and there are mares in their 30s. The body condition of those mares has greatly improved, and herd levels remain at a manageable number for what the land can support.

With the mustangs, we need to recognize the true problem, not the symptoms: reproduction is the problem. What’s happening on the ranges is compensatory reproduction: when animals are removed from the herd (in any animal species, whether it’s elephants or deer or whatever) reproduction ramps up in the animals left behind to fill that void. The current policy of roundup and removal is actually making the problem worse. Fertility control is our only solution.

A severely emaciated mare gathered off the range in Nevada. BLM Nevada/Flickr/CC