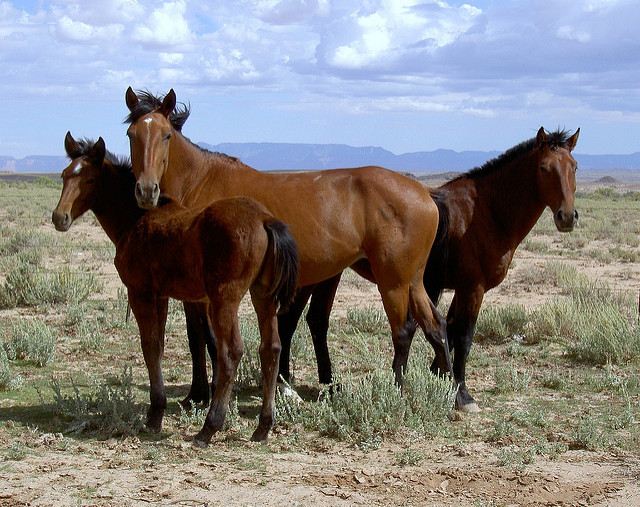 Front Range Equine Rescue filed suit against the Bureau of Land Management earlier this week in response to the federal agency’s plans to test three sterilization techniques on over 200 mustang mares in holding.

In late June, the Bureau of Land Management (BLM) released a Decision Record detailing the agency’s plans to test three permanent sterilization techniques on mustang mares currently living in at the Hines holding facility in Oregon. This plan is the latest step by the Bureau of Land Management to find a solution to feral horse overpopulation on stressed rangeland throughout the American west; tens of thousands of mustangs are living out their days in holding facilities as a result of the current unsustainable model of roundup and removal from the range.

Despite ongoing objections from mustang lovers, activists and organized protection and support groups, the BLM appears to be going ahead with its experimental techniques. In response, Front Range Equine Rescue, devoted both to horse rescue and mustang advocacy, filed a lawsuit in federal court against the BLM on Monday, July 25 to attempt to put a stop to the planned experimentation.

To determine if permanent sterilization is a viable solution to controlling wild horse populations, the BLM seeks to experiment first on a test population of mustangs currently held in Hines, Oregon. The BLM is partnering with Oregon State University to perform this study. The Decision Record describes the three methods to be utilized in the experiment:

The ovariectomy is a standing procedure: mares are sedated, but awake. The veterinarian makes an incision in the vaginal wall and then reaches through this incision to the abdomen to remove the ovaries. Both pregnant and open mares will be considered for this portion of the study.

Neither tubal ligation nor hysteroscopically-guided oviduct papilla laser ablation have ever been tested on horses before. The tubal ligation procedure calls for the mare’s abdomen to be insufflated and instruments to be inserted to cauterize and cut the oviducts; both pregnant and open mares will be considered. Hysteroscopically-guided oviduct papilla laser ablation can only be performed on open mares as there is a high risk of abortion in pregnant animals; a laser fiber is inserted to scar and seal the opening of the mare’s oviducts. Open mares in both of these groups will be exposed to stallions for three to five months to gauge the success of these methods.

The BLM has emphasized that the point of this research is to gather data as to whether these methods will be viable on a larger scale; the results of the experiment are not policy-setting.

While many mustang advocates are strong supporters of the PZP vaccine — a reversible contraceptive that is administered through darting — the BLM has stated that:

[…] longer lasting formulations have not proven effective at population growth suppression on a majority of HMAs. Using the two-injection liquid PZP inoculation, BLM would need to gather the horses and treat the mares during the appropriate time period (late winter to early spring) then release those mares back to the HMA. For PZP to remain effective mares would either need to be gathered or bait/water trapped every year to be retreated with PZP, or mares would need to be located, identified, and successfully darted every year with a booster vaccination of liquid PZP. Locating, identifying, and successfully darting all individual mares during late winter or early spring annually is logistically infeasible across most HMAs.

While the BLM recognizes ovariectomy as a proven technique, both experienced veterinarians and individuals who have witnessed the procedure firsthand state the procedure provides a significant risk to the mare. In an observed training workshop for ovariectomy, five burros and one horse (all tame, not wild) underwent the procedure; the horse and one burro died while another burro aborted. Two burros later developed secondary infections that required additional veterinary attention to treat.

Anyone who has ever nursed a horse through a surgical procedure is aware of the amount of careful aftercare necessary; these complications are compounded when dealing with a wild horse. The fact that this invasive procedure will be tested on pregnant mares at varying stages of development should also be worrying.

Neither tubal ligation nor hysteroscopically-guided oviduct papilla laser ablation have ever been practiced on equines; while the BLM argues that this study is intended to show whether these procedures are viable options, critics argue that testing these techniques on wild horses is irresponsible at best and potentially deadly at its worst.

Front Range Equine Rescue (FRER) has advocated for mustangs in multiple suits against the BLM in recent years on matters related to gathers, apparent selective breeding management and sales by the BLM in the Kiger herd and a planned elimination in West Douglas. FRER announced on Monday that it had filed a suit in federal court to stop the BLM’s planned experiments.

FRER’s complaint states that the BLM’s proposed experiments are in direct violation of the Wild and Free-roaming Horses and Burros Act (WFRHBA): sterilizations are not in the best interests of the horses. In the past, the BLM has been twice challenged when it proposed castration of wild horses; the plan was deemed too extreme and irreversible. These challenges resulted in the BLM abandoning castration as a viable solution.

The BLM maintains that sterilization is legal, referring to language in the WFRHBA that specifically states the following:

The Secretary shall maintain a current inventory of wild free-roaming horses and burros on given areas of the public lands. The purpose of such inventory shall be to: make determinations as to whether and where an overpopulation exists and whether action should be taken to remove excess animals; determine appropriate management levels of wild free-roaming horses and burros on these areas of the public lands; and determine whether appropriate management levels should be achieved by the removal or destruction of excess animals, or other options (such as sterilization, or natural controls on population levels).

We will continue to follow this lawsuit and further developments on the BLM’s plan for sterilization. For more information about Front Range Equine Rescue and its suit, please visit the organization’s website.

The Bureau of Land Management documents can be read here: