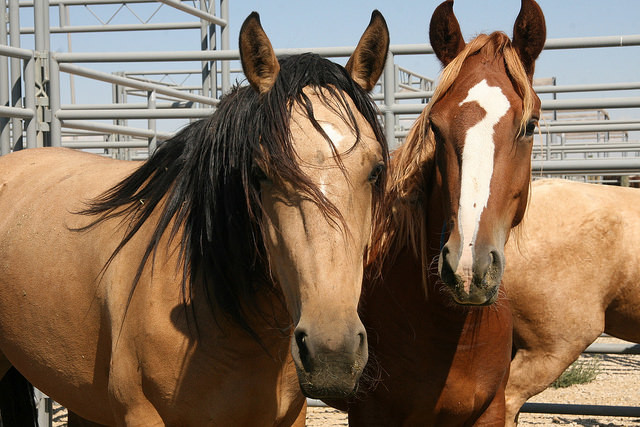 Horse Nation spoke with Advisory Board volunteer Ben Masters, who voted in favor of the controversial proposal which calls for the euthanasia or sale of the 45,000 mustangs in short- and long-term holding.

The National Wild Horse and Burro Advisory Board consists of representatives from both the public and multiple interest groups, serving to discuss key issues and help advise to Bureau of Land Management (BLM) regarding the management of wild horses on public lands. In its meeting at the end of last week, the Board visited Herd Management Areas, or HMAs, to observe wild horse ecosystems at work. The Board also deliberated over the pressing issues of mustang management across the American West, culminating in a proposal that reads as follows:

Follow the stipulations of the Wild Horse and Burro Act by euthanizing or offering for sale without stipulation all suitable animals in short and long term holding facilities.

This radical proposal has already been met with massive waves of public outcry as news rippled across social media on Friday, September 9. To help readers understand the issue, here are some key facts and figures, as stated by the BLM:

The proposal for sale or euthanasia was voted in favor by seven of the eight members of the board. One of those voting in favor was Ben Masters, who is perhaps best known for the documentary Unbranded: the film followed the story of Masters and three friends as they adopted 16 untrained mustangs and rode them 3,000 from Mexico to Canada to demonstrate the tenacity and versatility of the breed. Since completing the project, Masters has become a key voice for the plight of the nation’s wild horses, an outspoken advocate for the adoption of mustangs and was nominated to serve on the National Wild Horse and Burro Advisory Board — a volunteer position.

Horse Nation spoke with Ben Masters to learn more about the heavy decisions behind this proposal.

HN: This is obviously a controversial proposal that you voted in favor of. Do you believe this proposal has a chance of being adopted by the BLM and put into motion?

I really, truly hope it does not come to euthanizing horses. I do hope that the proposal creates such a stir that people realize that their good wishes are not enough. Hopefully this recommendation wakes people up. For two years since we released Unbranded I have worked so hard to get these horses adopted and out of holding pens, and I failed. I don’t want to admit defeat, but I’m also being real.

This is the reality: there are 45,000 horses in short- and long-term holding pens. There are another 40,000 excess horses on the range. Let’s say this proposal passes: it will take years to round those horses up, and each year another 10,000 to 12,000 foals are being born. The problem is astronomical. The BLM hasn’t been able to do its job because they’re constantly getting bogged down in lawsuits.

In the end, it comes down to what’s more humane: euthanasia of horses, or allowing wild horses to overgraze millions of acres of public land that they and wildlife depend on.

HN: One popular line of argument is that we would not have these overgrazing problems and destruction of ecosystem if wild horse habitat was not also grazed by cattle or used for other interest groups. How would you respond?

I would love to see cattle removed from HMAs just to take that variable out of the equation — so people can still go out and see that there are too many horses and they are overgrazing the range. I visited one HMA that has not had cattle on it for eight years and it was one of the worst range conditions I’ve ever seen — it was just an invasive monoculture of cheatgrass. The vast majority of the edible vegetation had been overgrazed and that range could take decades to come back.

The delicate desert ecosystems of the West are being destroyed, and in many places, we won’t be able to get it back.

HN: Another popular argument describes the horses as a living testament to our history, that we owe so much to the horse and that they don’t deserve to die.

I agree — we owe a ton to the horse. And I’m not advocating to ship these horses to Canada or Mexico and put them through three days of terrible conditions and a painful death — that’s inhumane. But I want people to step up to the plate to adopt more horses. I just got another mustang last week.

What is more important: keeping thousands of horses alive in a pen for the rest of their lives or protecting the health of millions of acres of rangeland? No one wants to to do this — no one truly wants to put these horses down. But at the same time, if the BLM can use all of that money tied up in the holding pens to actually protect the range, slow population growth and manage the herds, from that point forward we have a 100% sustainable solution.

If we are truly serious about protecting wild horses, we have to open the budget for herd management and we have to get horses off the range. We have to make the hard decisions.

HN: This decision, of course, is extremely unpopular, and you’ve opened yourself up to be essentially crucified on social media.

The reason I decided to do this is the 32 million acres of land: I have the ability to create positive change on the landscape. And that’s what I’ve been striving to do my entire life. We’ll be able to leave behind a legacy of conservation that I could never achieve on private land — this is more land than Ted Turner has. My recommendations, however unpopular, could help improve 32 million acres and I could leave the world a better place than I came into it. In the long run, keeping wild horse populations at a level that allows for thriving ecological processes to continue is best for the horses, the range and everything that depends on it.

I did not volunteer for this position on the Board — I was nominated, and then asked by several people. It’s all volunteer, I’m not paid; I give up weeks out of each year to do research. There’s no personal gain in this for me. This decision has screwed me over for a lot of opportunities in my future, and I did not make this decision lightly. I truly believe this is the most humane option for the current situation. I did not want to make this decision. It was torture. But the health of the rangeland has to take priority. Everything depends on it.

Horse Nation also interviewed the sole vote in opposition to this proposal, Ginger Kathrens of The Cloud Foundation. Click here to view the Q&A.

Weigh in, Horse Nation: how would you propose to resolve the mustang crisis? Let us know in the comments section.