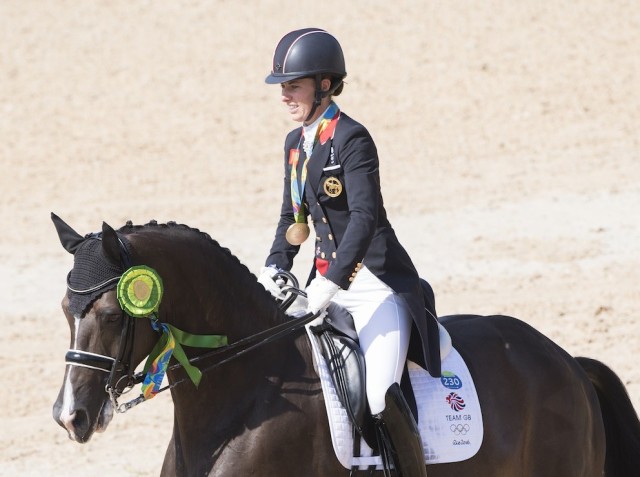 With a bottle of wine, a sparkly browband and 5 gallons of Starbucks, we’ve lured our resident rogue dressage queen Morgane Schmidt Gabriel into giving us her take on Olympics dressage, one day at a time. Here are her observations from the Grand Prix Freestyle!

So this morning I watched the Grand Prix Freestyles. Aside from The Husband in the background making comments about me watching all those ‘DreSedge Prix*’ all week it was quite a nice way to start my day (even if all I had was coffee and no wine). The results were pretty predictable — Valegro takes gold and Germany sweeps the rest with the US just outside the medals. For the complete, and official results, check out the Live FEI site (which even has cool details and individual movement scores listed).

Although she isn’t riding for the U.S., I feel like I should start by mentioning that today Isabell Werth became the most decorated rider in Olympic history earning her 10th Olympic medal (and surpassing all those now lesser-knowns like Anky van Grunsven — or as NBC has referred to her, “Andy van Grunsven” — and Reiner Klimke)! Mad props to her! She and Weihegold OLD put in a beautiful test with superbly chosen music earning an 89.071%. Some highlights include her stellar canter pirouettes that were active, expressive, and on the spot as well as her tempi changes that were through, up in the front, and straight. Werth rode beautifully and really demonstrated both her extreme riding skill and ring prowess.

On to the seemingly more popular news, Valegro and Charlotte Dujardin won the Kur — and gold– with an outstanding 93.857%. While I often think this pair are allowed some wiggle room for mistakes simply because they’ve earned the name recognition, I have to say that they did a beautiful job. I absolutely love Valegro and their ability as a team to convey a feeling of serene power in all their work. The music and choreography were perfect for Valegro’s gaits and persona, earning the pair a #1 for artistic rank and an artistic score ranging from 97-99. Certainly the latter is highly subjective and very susceptible to the favoritism I alluded to earlier, but in this case I do agree with the judges. It’s rumored that Valegro is due to be retired soon, and if that is indeed the case what a stellar way to end his career.

For Team USA, Steffen Peters, Allison Brock, and Laura Graves competed in the kur. Allison Brock and Rosevelt put in a good test, earning a 76.160%. Steffen and Legolas 92 had a fun test earning them a 79.393%. The ride was clean and quite a bit more harmonious than the pair’s last two rides at the games. Legolas’ piaffe and passage work was quite good and he had a lovely, seamless transition from his canter pirouette to piaffe and then to walk.

Our last rider, Laura Graves, and her Verdades put in a very strong test, earning an impressive 85.196%. For such a relatively new team in the international dressage scene, these two really delivered. Like Valegro, Verdades is another horse with quite a bit of strength and presence (as opposed to some of the “lighter,” perhaps more elegant horses like Showtime FRH) and Laura did an excellent job keeping it both powerful and harmonious. Her music and choreography were excellent, as was the degree of difficulty. Their lowest scores were in their walk work, where they received mostly 7-7.5 and a couple scores of 6.5. Although not much can be done to improve a horse’s walk, I would imagine that as they continue to gain experience they will be able to maintain more relaxation in the walk work and perhaps bring that up a bit. Regardless though, I would predict that these two will be the next up and coming dressage sweethearts.

Germany’s other two riders, Kristina Broring-Sprehe and Dorothee Schneider, also put in lovely rides. I don’t have anything particularly intelligent to say about them that won’t be super repetitive. I will note though, as I’m sure you all care, that I absolutely love Schneider’s mount, Showtime FRH. While I tend to be attracted to horses more similar in type to Verdades and Valegro — strong, substantial, powerful movers who seem somewhat more solid in their footfalls — I just love how elegant and elastic Showtime is. I do believe he has some Sandro Hit blood in him though which would mean he’s related to my own Beast which could cause me to be a little biased.

In any event, I guess that wraps up my dressage ramblings on Rio. Tune in in another four years to hear more mediocre commentary and insights.

*Clearly pronounced ‘pricks’ for his amusement.