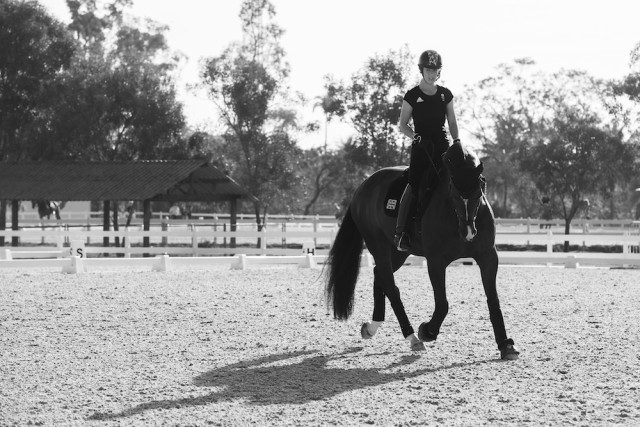 With a bottle of wine and a sparkly browband, we’ve lured our resident rogue dressage queen Morgane Schmidt Gabriel into giving us her take on Olympics dressage, one day at a time. Here are Morgane’s observations from Day 2!

Let’s just take a moment to be STOKED that the USA is currently sitting in position for bronze in The Dres-Sedge! How fabulous.

With that out of the way, let’s look at some of today’s other highlights. Yesterday I ran through some of the top placings but that can largely be deciphered by any number of our earlier posts or on the Official Rio 2016 results page, so this morning I’ll spare you that (also I find it somewhat repetitive and boring so there’s that…). Instead I’ll regale you with my oh-so-insightful thoughts on what I’ve watched so far (for the three of you still reading I promise it’ll be at least quasi-entertaining).

Shocking absolutely no one, Charlotte Dujardin and Valegro smashed the competition earning an 85.071%. I have to say it truly was a lovely test, quite harmonious, active, and technically correct. Their half pass zig-zag at the trot was fluid, powerful, and super accurate; the one tempis were up and through; Valegro’s outline was steady and correct, remaining on the vertical or just a hair in front. Essentially, they gave an outstanding performance. That being said, I can’t help but feel they were scored a bit high because of who they are.

Now before anyone shoots me or — even worse — sends me threatening Facebook messages, hear me out. I’m not trying to take anything away from this pair or imply they don’t deserve to be in first, mostly I’m noting that I think other riders gave similarly impressive rides (Hi, Germany, I’m looking at you too here) but scored substantially lower. Specifically speaking I thought Laura Graves’ ride on Verdades was of similar quality (minus her missed/late change on the canter zig-zag). Note that I am not saying she should have been ahead of Dujardin, as she had mistakes and thus could easily score lower than Valegro given my assumption that they’re of similar quality. But I am saying that I don’t think Valegro was nearly 7% better.

I actually thought Verdades had some better, more active, even piaffe work than Valegro who had some small hiccups in his first piaffe but still managed to get a 9 and a couple 8.5’s while Valegro’s only got one 8.5 and then 7 – 7.5’s. What were the judges doing when Valegro took a few odd, halting steps? Do those not matter because he’s Valegro? Or, similarly, where were they looking when he did his first canter pirouette that was slightly large (see commentary on NBC’s video where the announcer says, after seeing one judge give it a 10, “…[awkward pause]…first one to my mind was slightly large…”) but still got a 10 and 8.5 – 9? My top guess is that they were all applying bug spray and hoping not to be bitten by whatever “toxic bug” bit Parzival a few days earlier and made his tongue turn that weird blue color.

I digress though. My point (I do sort of have one) is that I think it’s easy for the judges to get wrapped up in the expectation of a fabulous ride from a big name rider and then not entirely focus on what’s in front of them. I’m not blaming them for this; it’s far easier for me to sit here and watch back to back videos from all the many fabulous angles provided and then nit pick them apart at my convenience than it is to judge a ride live and on the spot. Judges are human, I get that. I guess I just wish it didn’t all seem somewhat like an exercise in predestination.

But anyhow, now that I’ve stirred that pot I’ll move on to more entertaining things: Particularly what a fabulous sport Carl Hester is. If you missed his ride, he had an unfortunate spook early in his test. They went on to have a great ride but it did cost them top placings. Hester brushed it off though, humorously posting on Facebook and attributing it to Nip Tuck sighting a Pokemon in the foliage (seems valid). If only we all could keep that sense of humor, particularly when we’re under pressure representing our nation at the Olympics. No big deal.

I thought Steffen Peters and Legolas 92 put in a solidly nice test. Legolas’ passage was pretty outstanding. They came in just a hair under Graves and Verdades which seemed pretty spot on. Graves and Verdades looked more harmonious and polished at moments and Verdades seemed somewhat quieter in the contact than Legolas did.

Isabell Werth and Weihegold OLD put in a nice test and are currently sitting in third. I feel like Dorothee Schneider’s test from the day before was actually a bit more consistent and harmonious but the wine (and over 24 hours time) could be affecting my memory. Fellow team mate Kristina Bröring-Sprehe and Desperados FRH, currently in second, also put in a nice test. It seemed to be a bit less precise at times than some, but I think it’s mostly just a function of Desperados being such a lofty, loose mover. I’d totally take him off her hands though anyway.

Other interesting things I noted while watching endless “Dance Ponies” this evening (this is what The Husband now calls them) includes the fact that I’d love to own quite a few of them. That might result in me being single again quickly though. The Oldenburg mare, Orthilia, and the Hannoverian gelding, Showtime FRH come to mind this evening as ones I might take that risk for. Just lovely. If anyone wants to donate to that cause let me know and I’ll set up an incredibly tacky online funding page so you can support my addiction.

I’ve also noticed that The Husband is not so much a fan of watching me watch endless ‘Dance Ponies’ to the neglect of making dinner and actually talking to him. Equally shocking. With that realization I suppose I’ll end for this evening. Tune in tomorrow to see how everyone fares after the Grand Prix Special. Hopefully there will be fewer Pokemon and more spectators in attendance.