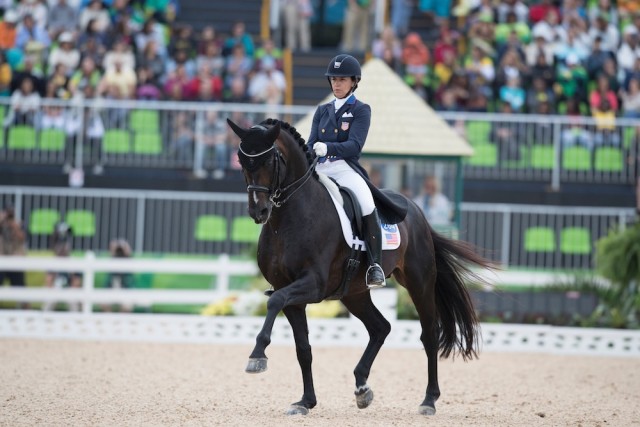 With a bottle of wine and a sparkly browband, we’ve lured our resident rogue dressage queen Morgane Schmidt Gabriel into giving us her take on Olympics dressage, one day at a time. Here are Morgane’s observations from Day 1!

Yesterday kicked off the first day of Grand Prix dressage in Rio. I’d love to tell you all that I got to stay home and stream it live like a Netflix binge but sadly the horses don’t feed, clean, and ride themselves. Bummer. Fortunately NBC still has the videos up so I was able to binge watch in the evening with a glass of wine so that I could bring you this fabulous recap. You’re welcome.

To start, let’s look at the top placings so far. In not-so-shocking news Germany is in the lead (note to self: if I ever hope to make an Olympic team I should not move to Germany…or Britain these days*). Dorothee Schneider and Showtime FRH are currently in first with a well deserved 80.986% and fellow teammate Sonke Rothenberger and Cosmo are sitting in second with a 77.329%. In third, with a 77.157%, is Great Britain’s Fiona Bigwood and her lovely mare, Orthilia. Edward Gal of the Netherlands and Voice are currently sitting in 4th with a 75.271% while the USA’s own Kasey Perry-Glass and Dublet sit incredibly close behind in 5th with a 75.229%.The USA’s other team rider, Allison Brock, put in a lovely test and is currently tied for 7th with a 72.686%.

While the current standings and scores are interesting, odds are this is old news to the true dressage junkies who watched this morning, so I’ll spare you the list and instead get on with marveling you with my totally-outstanding insights. (And for everyone else who might be interested in a complete list of the current standings check out the official Rio 2016 results page, and if you really want to get into the weeds, you can see the individual movement scores for everyone at the FEI’s page.)

As I watched last evening I took quite a few notes on my thoughts and impressions. They’re a bit scattered, but I’ll attempt to organize them starting with the top five riders and ending with my overall impressions. Please bear in mind that I do not profess to be an expert or to ride on the same level as these riders; I’m simply offering my opinions on what I saw, based on my current level of knowledge and understanding of the sport.

Dorothee Schneider‘s ride did stand out to me as being exceptionally polished and harmonious. Her hands were soft and following with a (generally) draped curb rein and her execution of the movements was fluid and precise. Showtime, a ten-year-old gelding by Sandro Hit, was equally poised, focusing entirely on his work and moving through and over his back. He had one of the quietest mouths of all the horses I watched and generally seemed relaxed and happy. Some of his strongest work was in the passage where, according to the announcer watching the individual movement scores, the pair received a handful of 9’s for the passage itself and even two 10’s for the transition into passage. Showtime also presented a huge walk with tons of overstep that earned him an average of 8 for the collected walk.

As outstanding as their ride was, it’s significant to note that it wasn’t perfect. The judges gave Showtime an average of 4.4 for the first canter pirouette due to an error; it appears she tried to ride it too small and Showtime broke for a moment. Even still, such a minor blimp in an otherwise fabulous ride doesn’t detract much from the overall impression.

By comparison, I thought Sonke Rothenberger‘s ride was nice, consistent, but not quite as polished; there were some obvious aids that were a bit too abrupt and Cosmo was a little less quiet in the mouth. Of course, I should perhaps cut him some slack since he’s got quite a bit less experience than Schnieder. Additionally, Cosmo is just a nine-year-old. The pair did have some very nice moments, including a lovely passage to walk transition. I can’t say that the test stood out particularly, but it was a solid test and partnership that I would largely expect to become more solidified with more time and experience.

Great Britain’s Fiona Bigwood and Orthilia put in a beautifully harmonious test. Everything looked super soft, easy, and light. These two really worked as a team. There were some moments where Orthilia wasn’t as quiet in the mouth as I would have liked, but Bigwood’s hands were very giving and her curb generally super loose so I’m inclined to believe that the moments Orthilia seemed busy in the mouth are more of a habit than a training issue.

I was particularly interested in watching Edward Gal‘s ride: Partially because he’s a legend of sorts and partially due to the fact that I was curious to see how he and Voice did, Voice not being Zonik. I know there are those who dislike Gal, but no matter what you have to say about his training techniques, you have to admit that that man sits on a horse like he was born there. His hands, at least in the show ring, are the perfect mental image of riding forward from the leg into the contact. His seat is so insanely elastic and supple that he looks basically like he’s doing nothing. His ride, Voice, is a beautiful stallion with a lovely presence, though maybe not quite as impressive as Zonik.

The pair put in a very, very precise, smooth test and Gal really had the stallion nicely packaged together but I felt like the test overall lacked some of the expression and spark that some of his other rides have had. I should also note that while Voice stayed in a very nice outline, he was quite busy with his tongue and mouth. There were also more than a few moments where it looked like the curb was a significantly tighter than the snaffle. Certainly I’m being nit-picky here, as I’d probably maim or kill to ride as well as Gal, but these things did stand out to me and were perhaps part of the reason he scored a bit lower this go around.

Our own rider, Kasey Perry-Glass, had a super test with Dublet. Dublet showed some really nice, active passage– five out of the seven judges awarded the pair an 8 and another judge gave them a 9 on their first passage– and some super fluid, through collected canter and flying changes. The walk work was good, though the scores on the collected walk ranged from a 4 to a 7, which seems like a fairly large discrepancy though obviously not totally uncommon. The overall impression of the ride was that it was quite nice and with consistent harmony. I would expect that there is room for further development and improvement. Of course, that’s likely a given as this is their first Olympics and Dublet just made her Grand Prix debut this January.

In addition to the top five riders, I also took notes on another fifteen or so rides, but I’ll spare you all for now. Instead I’ll just note that overall I felt like there were quite a few nice, even fabulous, rides that showed harmony and correct training. I’m pretty excited to see what tomorrow’s rides bring to the table. In the meantime though I’ll leave you with some of my random, somewhat less serious, impressions from watching this evening. They are as follows:

* Where given the number of fabulously talented riders, I’d likely not even make the cut to sit on a horse.