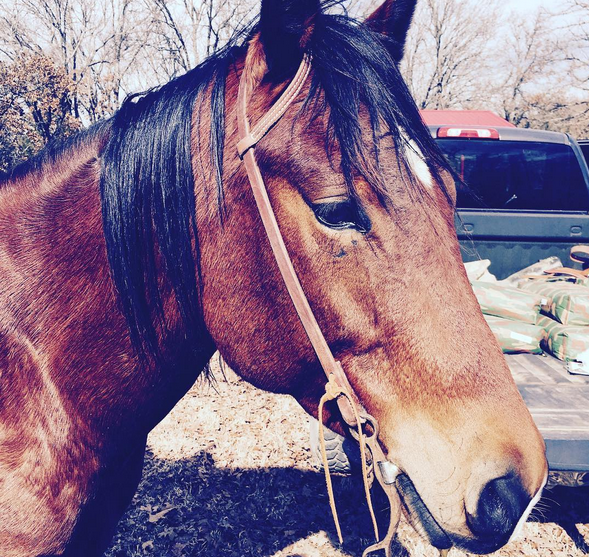 I think we can now officially call horse ownership a Hollywood craze. It’s like the Paleo Diet, but less depressing.

For better or worse, those little yappy dogs in purses are going to have to take a backseat to a Celebrity’s true BFF: ponies. Kaley Cuoco has certainly blazed the trail with her competitive show jumping career, but Zoey Deschanel also gave it a go (seemingly unsuccessfully), Iggy Azalea stepped into horse ownership and most recently Lady Gaga got in on the act. Now it appears Gwen Stefani is the next to be welcomed to the horse camp with open arms.

Stefani instagrammed her new sidekick yesterday, first with a closeup of a sweet bay face:

And then a full body shot of “Halo” sporting quite the getup:

Do you guys think we should tell her that you can get headstalls in fringe, too? Or rather, tell her to set the fringe down and back away slowly? (I’m torn. On the one hand, it’s terrible, but on the other hand, how could Gwen Stefani have a horse and not have it dressed like a Harajuku Girl in downtown Tokyo?)

According to the instagram capture, Halo was a gift, but Stefani did not specify who the giver was. That being said, I’m going to go out on a limb and speculate her new country star beau, Blake Shelton, may have had something to do with it. Time will tell, folks! In the meantime, welcome to the horse community, Gwen, and while I know the cowboys are going to tell you otherwise, consider getting yourself a pretty little brain bucket for those platinum locks: