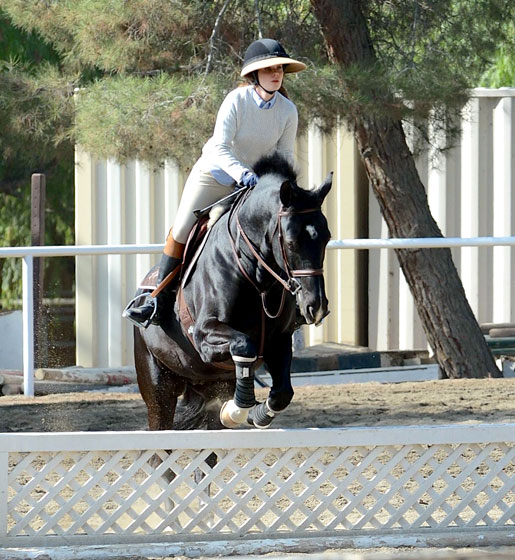 It’s a fact that adorkable actress Zooey Deschanel has a horse addiction, which we staged an imaginary intervention for earlier this year. But has Zooey taken her “addiction” a few steps (er, jumps) too far?

Here’s the deal: In a lawsuit brought by owner Patty Parker the actress is now being sued for “ruining” a horse she had leased for $13,000 for the year to compete. According to TMZ, Zooey signed a lease with Patty in 2013, with stipulations contained within the contract that she would not jump the horse more than three times per week.

Patty now claims that her Dutch Warmblood gelding, Literati, was returned to her injured, unusable and requiring medical attention.

OK, let’s back up for a minute and do some heavy Googling. According to USEF records, the only time Zooey competed Literati in a USEF-recognized competition was August 2013 at the Blenheim Summer Classic. They competed in the unrated Green Rider (2′) and Short/Long Stirrup Hunter (2’3″ to 2’6″) divisions.

Not too demanding, especially compared to what he was doing before Zooey leased him — i.e. multiple horse shows a year under several riders, competing in 3’6″ hunters, medal equitation classes and Level 4 jumpers.

Patty Parker’s lawsuit claims that Literati was returned to her in need of veterinary help, which she intends to make Zooey foot the bill for. According to TMZ: “When Deschanel returned the horse … it was a shell of its former self — ‘injured and unusable.'”

Of course, we don’t know the whole story. Maybe Zooey was, in fact, riding the horse into the ground. After all, our reputable source TMZ describes Zooey as a “hardcore equestrian… competing in events all the time.” (They also called Literati a stallion, which he is not.) Oh yeah, I’m sure she’s at the barn every waking minute between starring in her own television show, acting in movies (she has two coming out in 2015), putting out record albums, representing Rimmel cosmetics, doing photo shoots, dating producer Jacob Pechenik and participating in other assorted celebrity activities. Loads of free time to spend pounding laps around the ring on her poor crippled horse.

Or maybe Literati did what horses do best — injure themselves, oftentimes through no fault of our own — and the easiest person for the owner to point to was the one with the most money. Maybe the show ring schoolmaster Zooey thought she’d lucked out into leasing was on his last leg by the time she got hold of him, and now she’s the one having to pay the price for years of wear and tear under other riders competing him at much higher levels.

Who knows, but the takeaway from the situation, folks, is this: If you’re going to lease your horse, or if you’re the lessee, be sure to sort out all of this stuff in a contract first. Equine law of nature #1: Horses break. If vet bills arise, know beforehand who is going to be responsible for paying them. Get insurance. Get loss-of-use insurance. Do whatever you have to do to ensure that if things go awry, it’s not going to result in a lawsuit or, God forbid, a story on TMZ.

For more insight, we turn to the infinite wisdom of Gawker commenters:

If further details from the lawsuit surface, we’ll be sure to post an update here on Horse Nation. Until then, go riding!