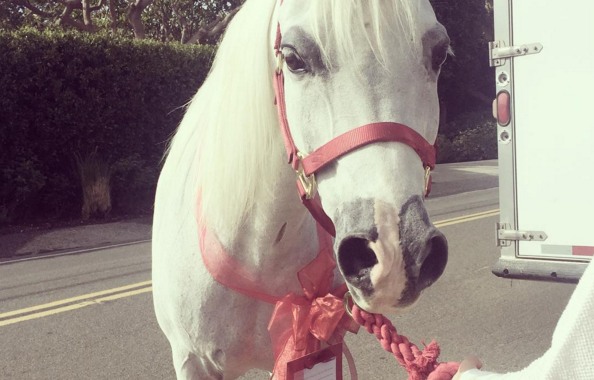 And yes, there was a bow on it. Biz Stamm gets the celebrity scoop.

Call all you want, but there’s no one home. You’re not gonna reach Lady Gaga’s telephone because she is off playing with her new horse that was given to her by Interscope records.

Not much information has been shared on this adorable grey mare that showed up on Lady Gaga’s doorstep, but she did post a few pictures to her Instagram showing the ribbon-adorned horse after she arrived…

Today on my doorstep was delivered a White Angel from heaven. It felt like the old days of the record business, she’s such a spiritual girl! A heartfelt thank you to John Janick and Steve Berman, the whole Interscope family. I will ride, and care for, and love her forever. I was so surprised!❤️

…munching on some hay in her stall…

…and taking Gaga for a very dreamy looking ride.

I feel like I’ve known her my whole life she wants to show me things. ?

Weirdly, this isn’t the first time the pop star has made Horse Nation headlines. In 2013 we reported on her oh-so-Gaga red carpet entrance at the American Music Awards yesterday, in which she was perched atop a white horse (a.k.a. two men in a horse suit) dressed in a lavender Versace gown.

Then, in 2014, we told you about her purchase of a six-acre $23 million Malibu oceanfront estate that included a stable for eight, paddocks, an arena, and access to bridle paths.

One more horsey Gaga fun fact: while auditing a George Morris clinic a couple years, Jenni Autry delighted at the discovery that George’s ringtone is none other than Lady Gaga’s “Paparazzi.”

In closing, let’s all take a moment to enjoy this amazing remix of Totilas peforming to Gaga’s “Born This Way”:

Biz is the author of Horse Nation’s “Back to Basics” series, which follow the journey of a “somewhat ordinary” horse and rider pair as they strive for greatness. Catch up on her past columns by clicking the #BACK TO BASICS at the top of the page.