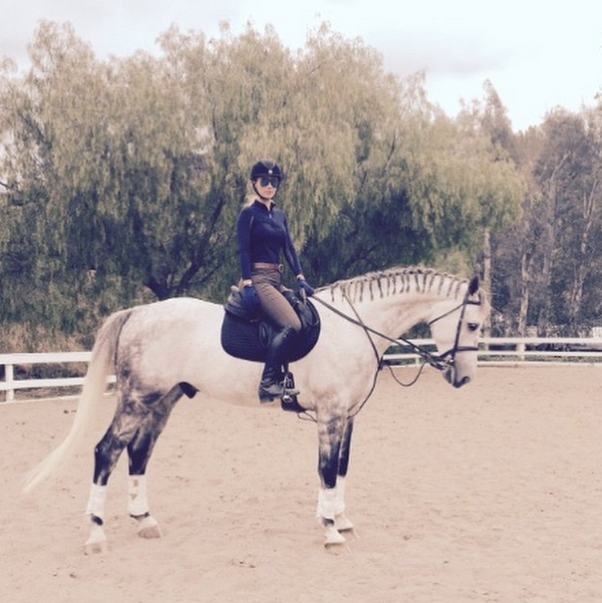 Welcome to the ranks, Iggy!

I’m going to open this with a declaration: celebrity gossip sites are ridiculous in general, but from an equestrian perspective, it’s really hard to tell what is “non-horse-people-speak” and what is actual legitimate news … or at least “news” in the tabloid sense, anyway. After a morning spent gleaning the gossip sites for news about our latest new celebrity equestrian, I was able to settle on one fact: Australian recording artist Iggy Azalea has joined the home team and climbed up into the saddle.

According to various sources, Iggy took up horseback riding upon the suggestion of a fan, who thought she might find it therapeutic (Ms. Azalea famously quit Twitter and her other social media in a long rant.) And apparently, it’s working — Iggy’s returned to her own Instagram account with photos of her new horses, a Swedish warmblood named Defender and a Dutch warmblood named Strictly Business (nicknamed “Muscle Man.”) Gossip sites call both horses “stallions” but we’re waiting for an equestrian source or Iggy herself to back up that claim.

One of my babies has arrived! Meet Defender!

Me & Defender, he’s a Swedish Warmblood…enjoying his first day in California A photo posted by Iggy Azalea (@thenewclassic) on Apr 29, 2015 at 11:01am PDT

Me and SB today. His new nickname is Muscle Man and I just found out he’s a Dutch Warmblood for all the horse loving azaleans that have been asking. A photo posted by Iggy Azalea (@thenewclassic) on May 6, 2015 at 7:14pm PDT

We’re glad that Iggy has discovered what we knew all along — horses are a girl’s best friend, and the best refuge in a world full of haters. Maybe someday she and our other favorite celebrity equestrian Kaley Cuoco will get together for a nice hack. Best of luck in your equestrian career, Iggy — we’re rooting for you!

Thanks to reader Lisa Landis for the tip!