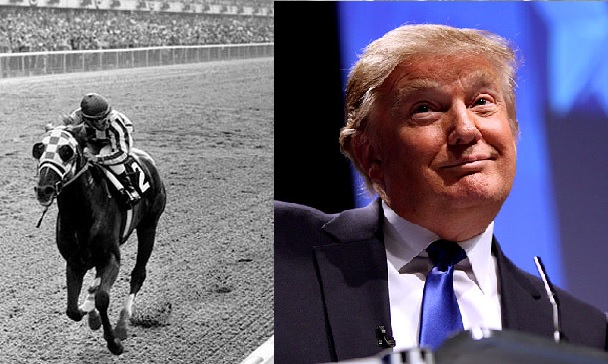 If Secretariat were on Celebrity Apprentice, he would fare far worse than Clay Aiken. And that’s weird.

We’re nonpartisan here at HorseNation, because we know and love that horsefolk come from all walks of life. Politics are hardly our bag unless Stephen Colbert is doing a story on Dressage or President Obama is getting photobombed by a guy in a horse mask. But we are a little partisan about Secretariat being one of the most baller horses of all time, so Mr. Trump, we’re going to need you to get your facts straight on this one. (The video is tiny, but the sound quality is just fine!)

In case you missed that:

“Do we believe in the gene thing? I mean I do, right? You know, I do. Like, they used to say, ‘Secretariat doesn’t produce slow horses-‘ actually, Secretariat wasn’t one of the best, if you want to know the truth, but in theory, that’s true.”

I’m going to go out on a limb and give Mr. Trump the benefit of the doubt that he sort of did his homework, in which case he is probably referring to the fact that Secretariat’s production of fast colts did not live up to the astronomical expectations set forth by the general public and the racing community, especially early on. His son Canadian Bound was the first TB yearling ever sold for more than $1 million, but he ended up being a bit of a dud on the track, and reporters had a hey-day talking about Secretariat’s failed legacy as a stud.

If you’re into touting other people’s/animal’s  failed legacies, that would be a great place to leave it, but you’d have to ignore the fact that Secretariat was actually an exceptional broodmare sire. As a grandsire, Secretariat contributed to icons like A.P. Indy, Gone West and Storm Cat. He also appears more recently in the lineage of this other little horse you may have heard of, named American Pharoah.

Secretariat’s success producing exceptional mares is almost certainly linked to his genetic “x-factor”, which we’ve discussed on Horse Nation in the past, and because of the gender ties of the gene, would cause exactly this phenomenon of average colts, awesome daughters, and even more awesome grandsons, but only when the genes and the breeding were matched just right.

So consider yourself Horse Nation fact-checked, Mr. Trump. And if you get in a fist-fight with a Friesian or decide to take up Western Pleasure, rest assured we’ll be glad to share it!