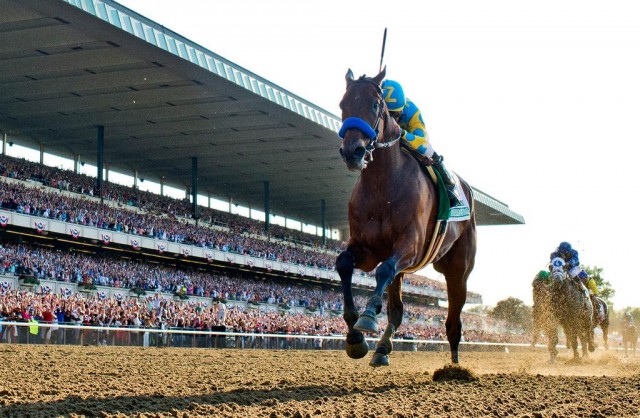 He is FINALLY the one. Congratulations to American Pharoah on becoming the 12th Triple Crown winner! pic.twitter.com/UtU4aY5W1j

The drought is over.

American Pharoah glided over the marathon mile-and-a-half at Belmont Park, loping home under the wire with his characteristic forward-pricked ears, the screams of the sold-out crowd cheering him home. Victor Espinoza raised his whip, pumping his fist to the sky, and for a moment, it was as though the world stood still. American Pharoah had done what we had been starting to believe was impossible. He had won the three jewels of the Triple Crown: the Kentucky Derby, the Preakness Stakes, and now the Belmont Stakes.

As the gates flashed open, American Pharoah looked for the barest of moments as though he were swimming, scrambling somehow for footing, his typically floating stride hurried — but hustled right to the lead regardless, Frosted lurking just off his hip with Materiality moving in from the outside.

As the field entered the first turn, American Pharoah settled into the lead, the main pack of the field fresh on his heels. Materiality and Mubtaahij breathing down his neck, American Pharoah continued an effortless-looking run through the backstretch, the pack shifting just behind him.

Through the turn they surged as Frosted began to uncoil, moving up the rail to pressure the leader. But simultaneously, American Pharoah too began to run, opening his stride and driving into the homestretch. Frosted soon fell far behind. They all fell far behind. As American Pharoah surged under the wire, ears forward, easy stride unfolding, the grandstands erupted. The drought was over.

His race time of 2:26.65 gives him the sixth fastest Belmont in history and the second fastest of any Triple Crown winner, second to the great Secretariat. American Pharoah becomes only the twelfth horse in history to capture the elusive Triple Crown, one of toughest challenges in sports; he is the first to do so since 1978. Out of the thirty-one horses he beat on the long road, none other ran in all three races: in each start, he faced fresher fields but conquered them all.

“This is for the horse. This is for the sport of #horseracing.” #TripleCrown #AmericanPharoah @ZayatStables pic.twitter.com/fGSzIZeNsO — Breeders’ Cup (@BreedersCup) June 6, 2015

In the post-race press conference, Team Zayat stated that barring any health issues, American Pharoah would race through the end of his three-year-old season before being retired to stud. We can look forward to seeing him in a few more stakes races this summer before he sets his sights on the Breeders Cup if all goes well. Bob Baffert also announced that he plans to donate $50,000 each to four charities with his share of the purse: Old Friends Farm, the Thoroughbred Aftercare Alliance, CARMA (for retired California-based racehorses) and the Permanently Disabled Jockeys Fund.

As I try to wrap my mind around the history that I witnessed being made, the only image I see repeating over and over again is the sight of a beautiful bay colt on a perfect June evening, galloping under the wire, ears pricked, running easy as though he could do it again and again.