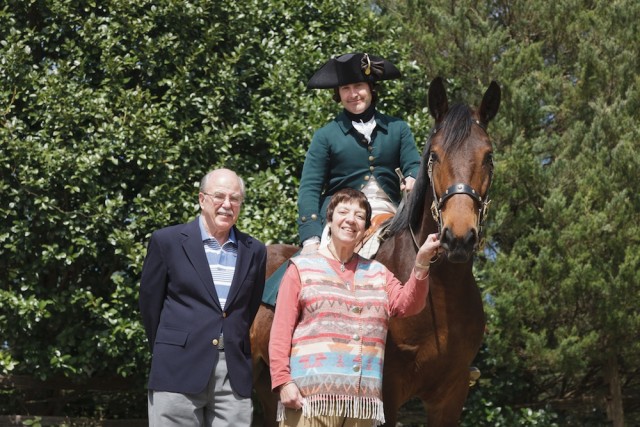 Steve and Claudette Tallon with “Lancer,” ridden by the Marquis de Lafayette as portrayed by Mark Schneider. Photo courtesy of Colonial Williamsburg via press release, used with permission.

Colonial Williamsburg, the living history park that hosts daily reenactments of colonial life, is well-known for its careful and conscientious preservation of rare domestic breeds that once thrived in eighteenth-century America. A “rare” breed is officially defined as having less than 1,000 individuals registered annually.

In keeping with this theme, Colonial Williamsburg recently announced that it had received generous donations of two Cleveland Bay horses. It’s estimated that less than 500 purebred specimens of this breed exist around the world; the breed originated in England and was once renowned as a coaching horse, especially in the eighteenth century. Fans of the breed in modern day praise the Cleveland Bay and Cleveland crosses for personality, athleticism, intelligence and movement.

Colonial Williamsburg’s new Cleveland Bays are named Lancer and Isabella. Lancer was purchased thanks to funds donated by Claudette and Steve Tallon of Williamsburg; Isabella was donated by her prior owner Cindy Kiser of Verona. Both Lancer and Isabella will found in Colonial Williamsburg as educational living history but also as performance horses, to be ridden by the Marquis de Lafayette as portrayed by Mark Schneider and Martha Washington as portrayed by Katharine Pittman.

Colonial Williamsburg’s Coach and Livestock Team is working with Lancer and Isabella around the town to desensitize them to the unique setting and many visitors they will meet in their new role. According to Paul Bennett of Colonial Williamsburg, the process is underway to acquire a Cleveland Bay breeding stallion and an additional mare to help actively preserve the breed.

For more information on Colonial Williamsburg’s Rare Breeds program, check out the details at history.org! 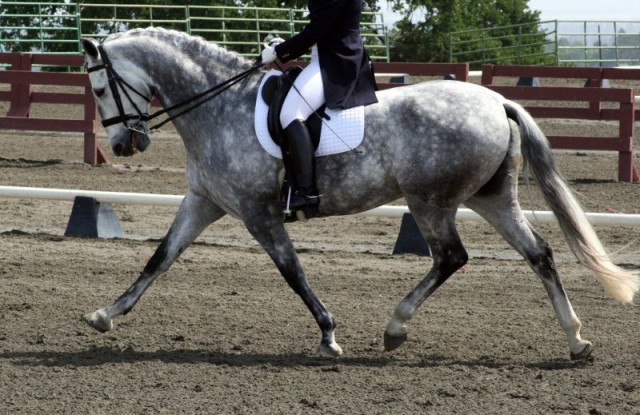 Because no one is allowed to make fun of our horses except ourselves, we gathered your submissions prompted by last week’s ‘Tongue-in-Cheek Pros and Cons Guide to Breeds.’

END_OF_DOCUMENT_TOKEN_TO_BE_REPLACED

So You Think You Know Morgans?

Samantha Richards, a Morgan Horse enthusiast and owner, tells the story of a versatile breed that refuses to be pigeonholed. END_OF_DOCUMENT_TOKEN_TO_BE_REPLACED