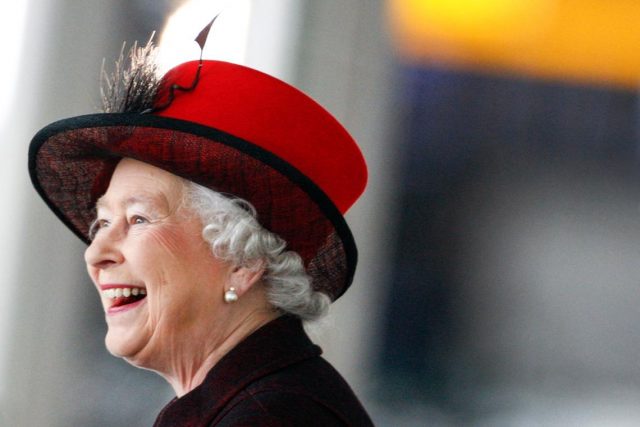 Her Majesty worked to protect horses and spread the principles of Monty Roberts around the world.

The news of Her Majesty Queen Elizabeth II’s passing on Thursday, September 8th traveled the globe faster than the death of any other monarch in world history in our modern technical age.

The last time a British monarch passed, few people in the world had television sets, and those who did witnessed ceremonies in black and white. So much has changed on earth since that fateful February day in 1952 when King George VI died in his sleep and then-Princess Elizabeth ascended to the throne.

Perhaps the sorrow and loss Queen Elizabeth felt that day is what so many of us around the globe are feeling now. I’ve burst into tears a dozen times since her passing. Like the Cullinan diamond that graces the top of the Sovereign’s Scepter, Queen Elizabeth II was to so many people around the globe our rock and the brightest shining star on our planet. She was the conscience of our civilization that well withstood the test of time. 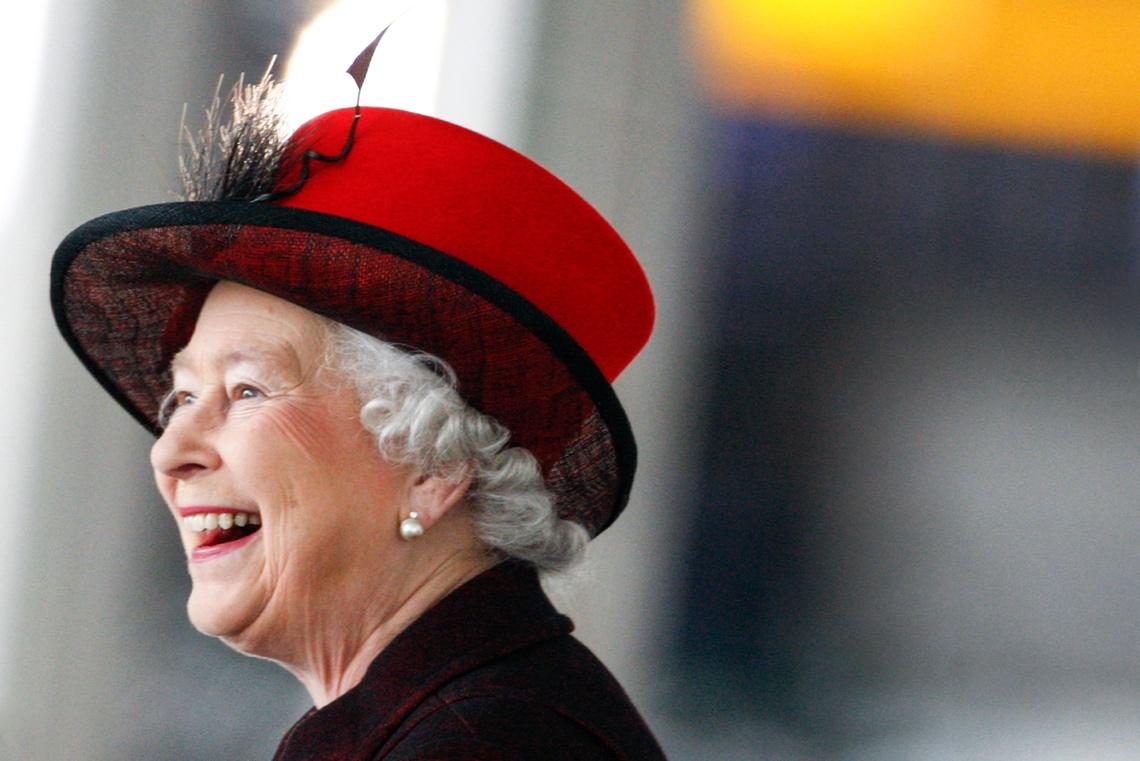 Her 70-year reign, the longest in the history of the British Crown, saw seven Archbishops of Canterbury, 14 U.S. Presidents, 15 Prime Ministers in Great Britain, and 12 in Canada. Roughly 90 percent of us living on the planet have known no Queen but Elizabeth. She was unique.  No one can compare to her. No one ever will. There are no words that can express the sorrow so many of us have felt in her loss. 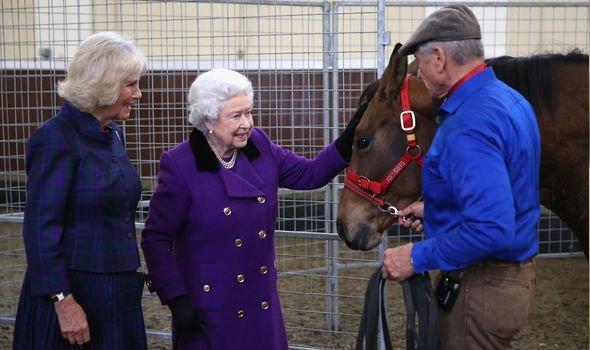 It’s been quite strange to have such deep feelings of grief as an American who’s never set foot in the United Kingdom. But I’ve always felt especially drawn to Queen Elizabeth. Perhaps this connection is due to my paternal family heritage, confirmation in the Episcopal Church, or time spent living in the British Commonwealth islands of the Bahamas in my late twenties. I grew up watching her on television, long admiring her leadership skills and finding a kinship in our mutual love of dogs and horses. Early in life, I knew who Queen Elizabeth II was well before I knew we had a United States President named Ronald Reagan.

So, you can imagine how I felt on a rainy August evening in 2020 when a package arrived on my doorstep in Washington, D.C., marked “Royal Mail” from “Windsor Castle.” Some months before, my dear friend Monty Roberts, one of Her Majesty’s closest confidants, asked me to prepare a document about my life’s work protecting horses. I was grateful for the opportunity and wrote a seven-page story entitled, “A Paradigm Shift.” Monty presented it to the Queen and she read every word. The fact that she took the time to read it brought tremendous strength to my soul and validation to my work.

But what that package contained has motivated me in a way I cannot describe. It was an Award, Recognition from the Queen, recognizing my “extraordinary efforts to reduce violence in the training of horses.” On it, her signature, “Elizabeth R.” 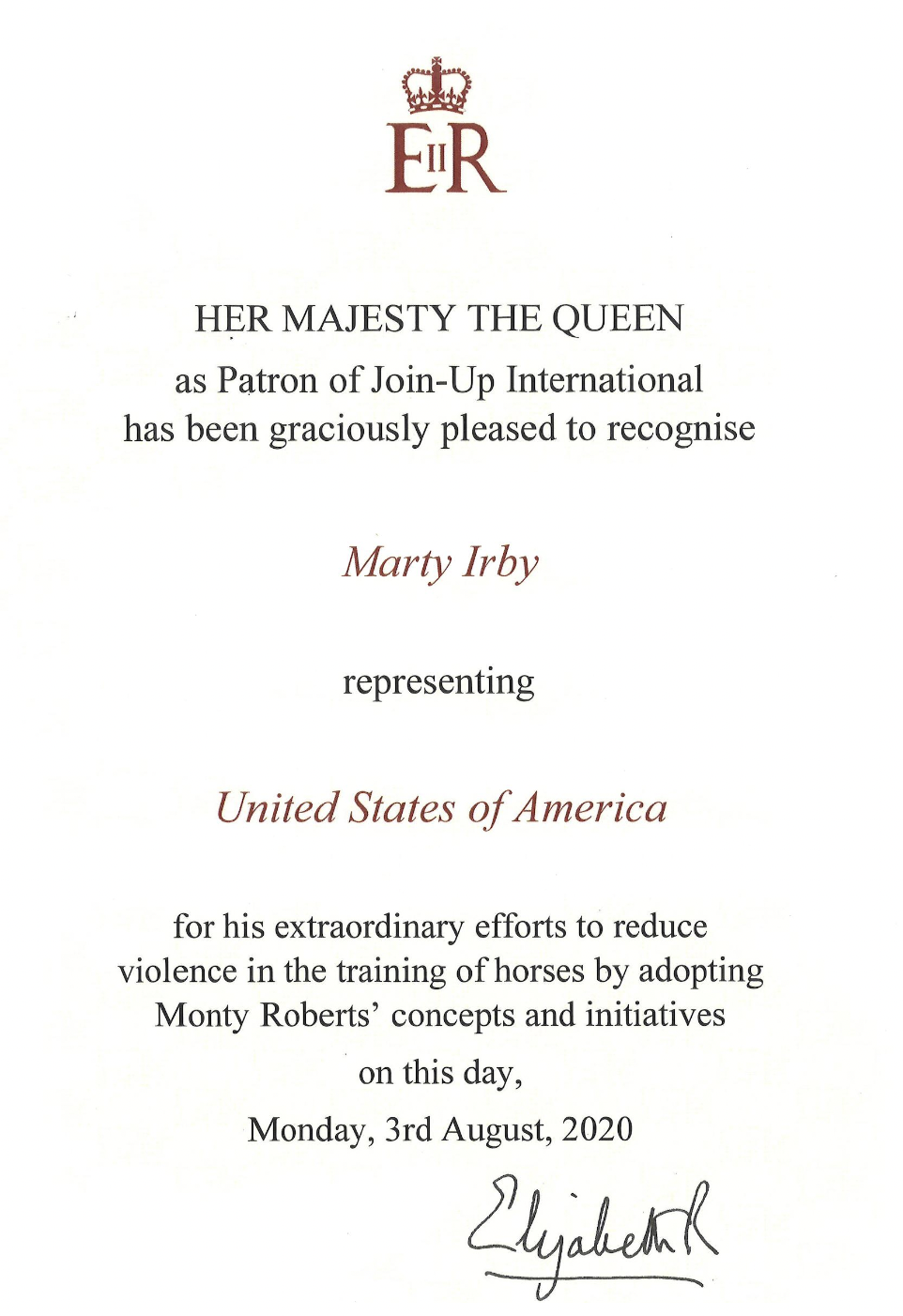 You see, the Queen and I had one very special love in common, a tremendous love for horses — the voiceless icons upon whose backs most of our civilization was built.

One of the most famous statements ever made by the Queen came at the age of six when she was asked what she’d like to be when she grew up. Her reply: “I should like to be a horse.”

Perhaps the Queen’s love of horses was something she was born with. Regardless, it was surely a Shetland pony her father gifted her at the age of four that brought that love to light. She frequently rode with trainer Terry Pendry, right up until a few months ago, at the age of 96. And in a moment that reminds us how very human she was — one of her happiest moments was clearly the day her very own horse Estimate won the Royal Ascot in 2013. 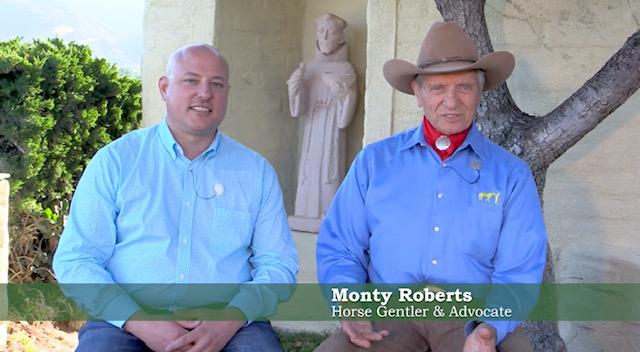 Marty Irby and Monty Roberts in June of 2021 at Flag is Up Farms in Solvang, California | Photo courtesy of Animal Wellness Action.

But it was when she met Monty Roberts in 1989 and learned of his training principles and methods he deems Join-Upâ that the real paradigm shift began to occur. The principles are built on the language of horses, which he refers to as Equus, that are non-violent and utilize true communication directly with the animals to win their trust. It’s something Monty often says makes them want to do what the human asks instead of being forced.

Her Majesty knew exactly what she must do to help horses all around the globe as Patron of Join-Upâ International. She commissioned Monty as a Member for the Royal Victorian Order, established by Queen Victoria to install knights and other notable members of service, to spread those principles around the world.

To date, Monty has taught these principles in over 41 countries and has arguably helped more equines than any other trainer in history. Polo ponies, once the most violently trained of all, are now some of the gentlest, most well cared-for horses because of that work. Racing Thoroughbreds all over the planet have a much better quality of life as well.

Her Majesty was elated to learn of the passage of the Horseracing Integrity and Safety Act, horse protection language we worked for six years to enact and which was signed into law in December 2020. The measure banned race-day medication and created a uniform national set of rules and standards for horse racing in the U.S. – the first federal horse protection law enacted in the U.S. since 1971.

She was also aware of the painful practice of soring Tennessee Walking Horses and our work to end it.  Soring is a despicable practice utilized to produce an artificial high step known as the “Big Lick” by inducing pain with chemicals such as mustard oil, croton oil, or diesel fuel, or by inserting sharp objects into horse’s hooves. The battle to end soring has been one the toughest political battles I’ve ever fought. The abhorrent practice has persisted in the Southeastern U.S. for nearly as long as the Queen reigned.

We will not give up. We will honor the Queen by working harder than ever to stamp out this and other abusive practices, execute her charge, and see horses set free from this all violence.

It is truly the end of an era, and as sad as we are today, I take comfort in knowing that Her Majesty Queen Elizabeth II will be helping us from the above. I am eternally grateful for the great honor she bestowed upon me and pay tribute to the Queen for her tremendous work and commitment to protect the voiceless we love so deeply.

Marty Irby is the executive director at Animal Wellness Action in Washington, D.C., and an 8-time world champion equestrian who was honored in 2020 by Her Majesty Queen Elizabeth II for his work to protect horses. Follow him on Twitter and Instagram @MartyIrby