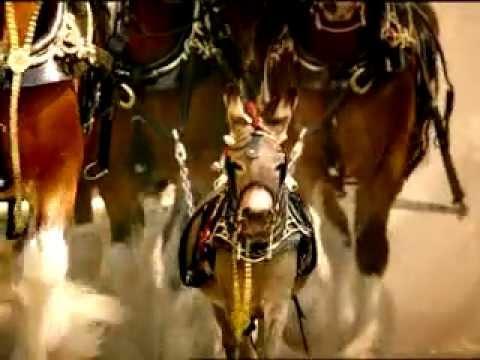 … Or at least every one we could find and feasibly share. Even though we have a new Clydesdale commercial to enjoy (and criticize) this year, we still can’t get enough of these classics.

Horse lovers everywhere were thrilled to find out that the Budweiser Clydesdales — or at least one them — were back for Super Bowl LVI. However, the commercial was met with lackluster enthusiasm and some criticism once the knowledgable horse people of the world actually viewed it.

So, here is nearly every Budweiser Clydesdale commercials since 1996. Sit back, grab a box of tissues, and enjoy.

Even though the Budweiser Clydesdales have been a part of the big game since the 1986 Super Bowl, when the Clydesdales tromped through the snow while a chorus chirped “when you say Bud you’ve said it all,” one could argue that this is the commercial that started it all.

This one is an outlier — it was from the 1998 Winter Olympics and not the Super Bowl, but we’re sliding it in anyway. It’s too good not to.

And this one is much more focused on Dalmations than Clydsdales, but there are Clydesdales in it, so it counts…

This was a controversial commercial at the time. It aired only once during the Super Bowl and was meant as a tribute to the victims of the 9/11 attacks.

This one is a bit more light-hearted. Reviews were a big deal that season, and the cowboys certainly let us know how they felt about it.

Being born a donkey doesn’t necessarily mean you can’t be a Budweiser Clydesdale.

Ahh, the classic snowball fight. We know who wins.

This one definitely gives me the warm-fuzzies. “I won’t tell if you don’t.”

In 2007, Budweiser brought this spin to the original 1996 commercial (and we whole-heartedly approve).

Like the 1999 ad, this one is much more dog-focused than horse-focused, but there are Clydesdales… and we love dogs!

Awe. Poor Hank. But at least he trains hard (to some key music from Rocky) and gets the part in the end.

2009 was a big year for the Clydesdales. There was this ad, where a Clydesdale learns to fetch (and finds a “branch” his own size).

True love knows no bounds. In this one the Clydesdale falls in love with Daisy, a dancing circus horse and chases her across the country. (Apparently the Budweiser Clydesdales break out of their stalls and barns a lot.)

This Clydesdale narrator tells how he is following in the hoofsteps of his great-grandfather.

In this ad the Budweiser Clydesdales help announce the end of Prohibition.

The bond between the trainer and Clydesdale (combined with some Stevie Nicks) is enough to choke anyone up.

The bond between the puppy and the horses hit so many people in 2015, that Budweiser brought it back for 2016 (we’re not complaining).

In 2016, Budweiser abandoned the heart-warming ads featuring dogs and horses and went with a slightly more… bold (?) campaign. We won’t like. We liked the dogs and horses.

This brings back a bit of the nostalgia, but less of the horses (hey, there are some in the background of one of the scenes…)

There was no Clydesdale commercial in 2018, and we debated indicating that and moving on, but the 2018 commercial should be shared. Instead of featuring the iconic horses, the company highlighted its efforts to provide water to areas struck by natural disasters. And it’s still a tear-jerker. Good on ya, Budweiser.

After a few years of not so many horses and dogs, Budweiser brought them back… to highlight their wind-powered plants. Okay, not as satisfying and heart-warming as the lost puppies, but better than the 2016 campaign for sure.

Both 2020 and 2021 featured ads emphasizing American pride and determination. They were well done, played on our emotions, and fitting for the time… no dogs or horses though.

And then there’s the 2022 ad. We said enough about it in this article, but you can enjoy — or criticize it — again now.