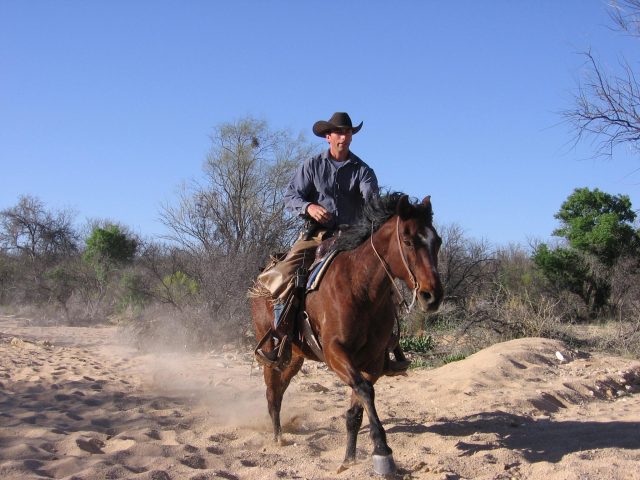 “They’re gonna run. We don’t want ‘em to but they will. Especially with that gray leading the pack. They’ve been living the good life and they’re probably not gonna want to come in. We’re just gonna stay with ‘em so we don’t lose ‘em. If we lose ‘em we might not find ‘em again today and then this day’s work is all fer not.” 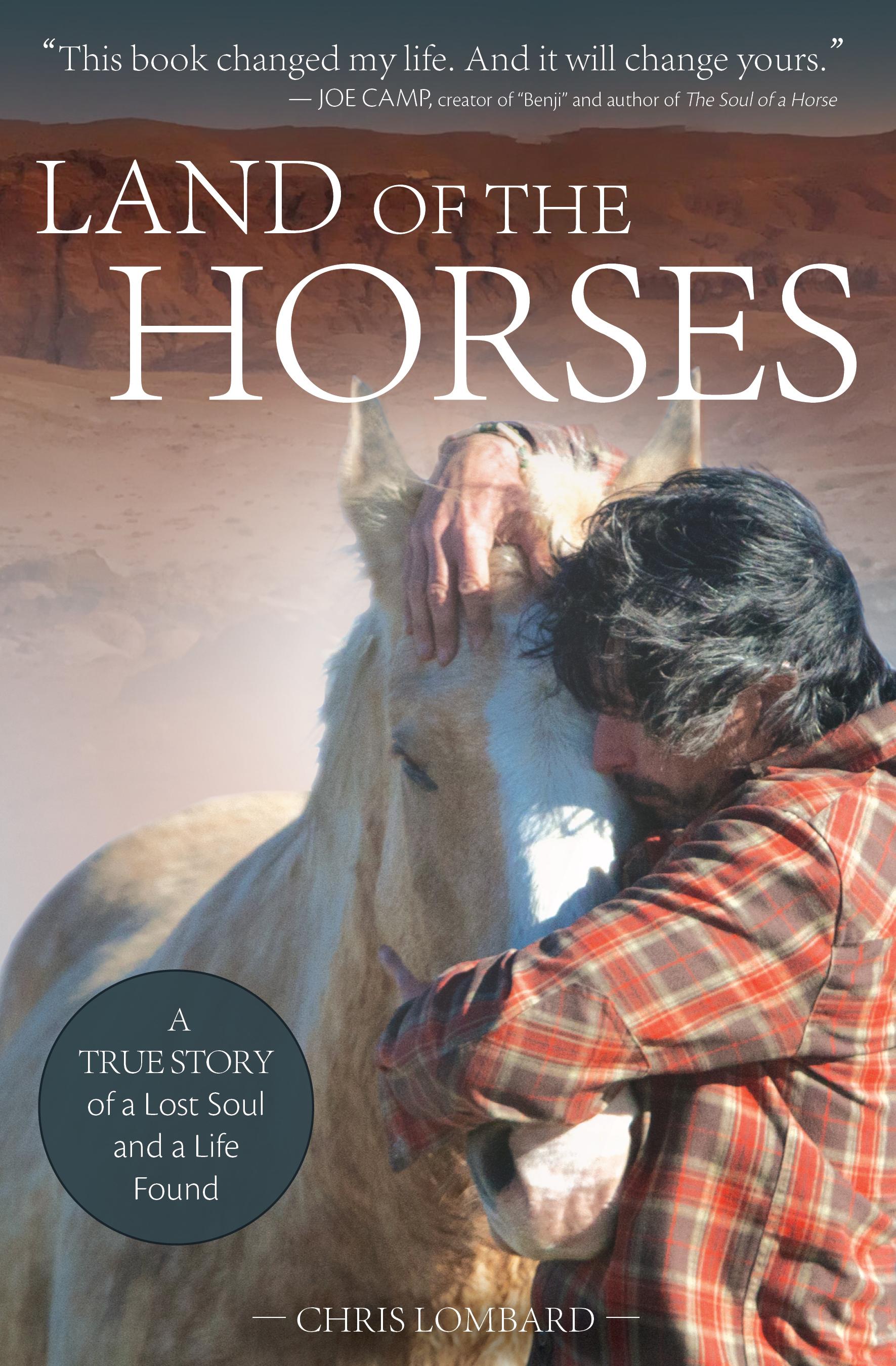 We followed a line of tracks leading away from the watering hole that Cody thought looked fresh. I couldn’t tell the difference. We came to a thick forest of mesquite we had to pick our way through. Then it opened up into rolling fields of grass with scattered patches of trees.

Cody stopped Jake and looked up ahead. “Hey, what’s that out there? You seein’ that?”

I looked hard and saw nothing but hills and trees.

Without any noticeable cue Cody took Jake up into a lope. I followed with Alto. We moved fast for a ways until Cody came to a quick halt and pulled out his binoculars.

“Down in that little dip, you see ‘em?” He pointed but I saw nothing. He passed me the binoculars. “Just past that second ridge off to the left of that grove-a trees.”

I scanned the ridge with the binoculars, and I saw what looked like a tail swishing under a tree but I couldn’t be sure. It appeared to be a good half mile away.

We rode out wide to the east of the horses. I soon forgot in what direction they were but Cody seemed like he knew where he was going. We arrived on a small hilltop. Below us were twelve horses spread out grazing and enjoying the morning sun.

“You ever brought in horses before?” Cody asked without taking his eyes off them. He was serious now.

“Okay. They’re gonna run. We don’t want ‘em to but they will. Especially with that gray leading the pack. They’ve been living the good life and they’re probably not gonna want to come in. We’re just gonna stay with ‘em so we don’t lose ‘em. If we lose ‘em we might not find ‘em again today and then this day’s work is all fer not.”

“Don’t feel like you have to help or keep up,” Cody said, holding Jake back. “It’s gonna git Western and I don’t wantcha hurtin’ yerself. Just get yer deep seat, keep yer mind in the middle of the saddle, and ride the ride.”

We slowly walked in behind the horses, and one by one their heads raised. We got within fifty yards when one of the horses, a tall gray mare, turned to look at us. I could see the wildness in her eye, unblinking as it followed our intentions.

She turned and started moving. The others followed. Cody slowly followed on Jake. I followed off to their side.

The gray walked calmly with her herd behind. Cody softly rode up one side and guided them in the direction he wanted. He whistled sharply to get their attention. All of the horses had one eye on us. As Cody worked one side, I went to the other, and together we kept them moving the way we wanted. It was going easy, so far.

Up ahead I saw a small dip to the land, and without ever bringing horses in before, I could sense what was going to happen.

The gray led them down into the dip, and they all broke into a trot as they ran up the other side. They then stayed in the trot. Heads started tossing. Tails swished. My nerves, like they were tied to the horses, started to build. I reached up and pulled my hat tight. Choked up on the reins and set my feet deeper into the stirrups. I looked down at the bone-bead bracelet on my wrist. 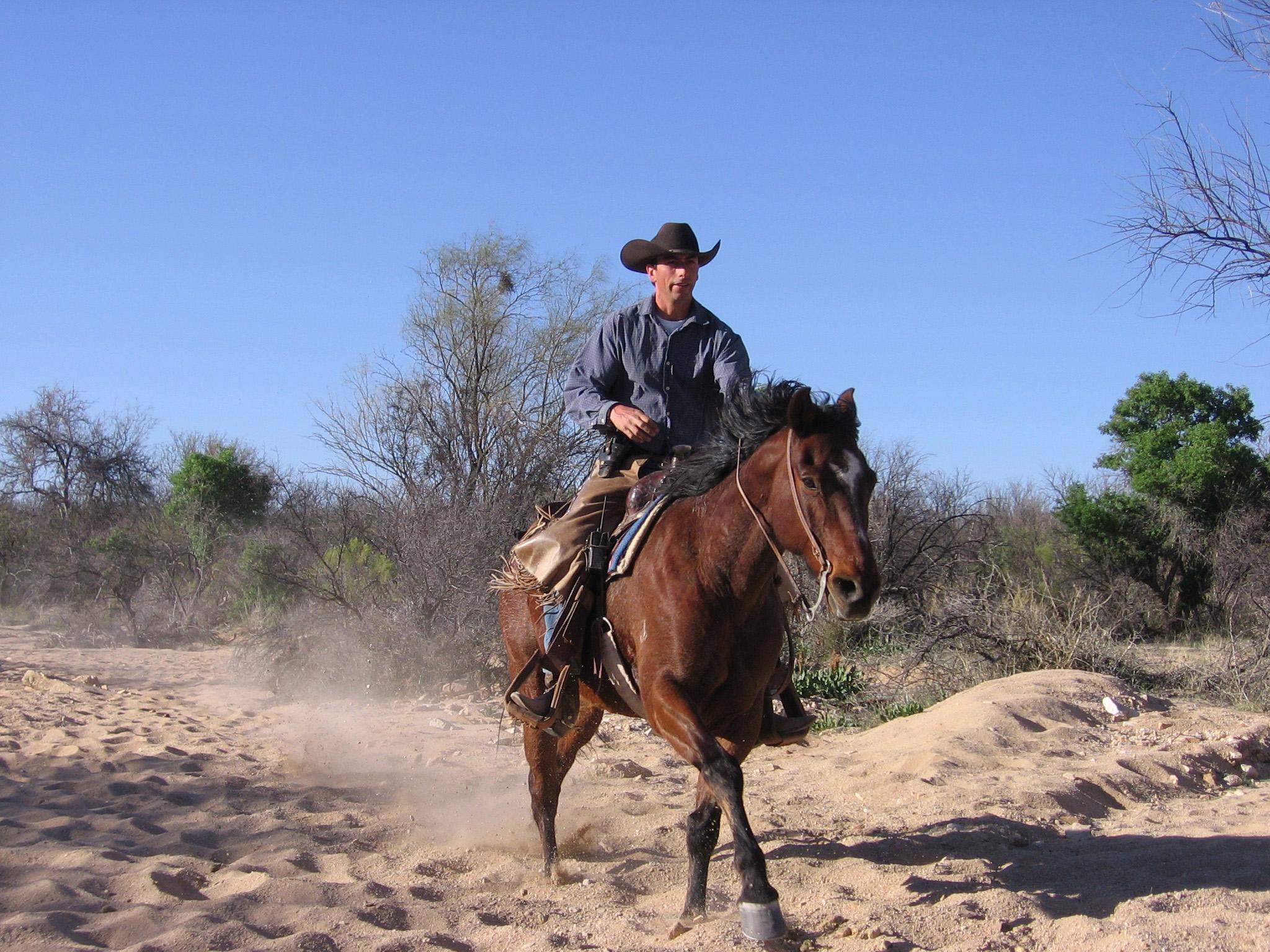 The energy was no longer containable. The gray took off.

Twelve horses sprinted across the yellow grasslands as fast as they could go with the gray mare in the lead. Hooves thundered across the ground. Dirt and dust flew back at us like rain and fog as we galloped after them.

Cody stayed right with them on the running Jake. The man rode beautifully. Alto and I were right there as well. I was already going twice as fast as I had ever gone on a horse. I was all over the saddle. The land was twisty and bumpy, and we were really moving. I stayed calm, kept a soft feel on the reins, and tried to sit Alto as deeply as I could.

We approached a mesquite forest, and in seconds the escaping horses fell into a line and disappeared underneath the branches at a full run. Without slowing or hesitating, Cody ducked the branches and he and Jake disappeared after the herd. All that was left in front of me was a cloud of dust. As Alto and I galloped up to the mesquite, I hesitated. I thought about easing back—and staying alive.

Alive…and the same. Nothing about me would change.

“Let’s go, Alto!” I leaned forward, loosened the reins, touched both legs to his sides, and we charged into the trees and dust.

There was no riding straight anymore, it was all cutting and turning around the trees, ducking branches and leaning from one side to the other. We weren’t cantering or loping or galloping—we were running, down one side of an arroyo and up the other, taking a straightaway as fast as we could before hitting the brakes for a turn. Some branches weren’t duckable and there was nothing to do but close my eyes and shield myself with an arm. Mesquite thorns sliced into my hands, neck, and face. I tasted blood.

I couldn’t see the horses or Cody, all I had was the trail of dust. Everything was silent except for the sound of Alto’s hooves moving assuredly over the uneven terrain and his breath steadily puffing as we went as fast as we could in and around the trees. The more I thought I was behind, the more I asked Alto for more, and the more he gave. We were digging with all we had.

Suddenly I saw hooves in the hot dust up ahead, kicking out, running hard. The band of horses started appearing one by one in front of me until we emerged from the mesquite and out onto the flats. Everything was open and clear…and I was right behind them.

It was Cody. He was just off to the side of the herd. He rode right up next to me. His eyes full of the excitement of the moment.

“Can you believe we get paid for this!” he shouted. Joy shining in his face.

This excerpt from Land of the Horses by Chris Lombard is reprinted with permission from Trafalgar Square Books. You can purchase the book here.