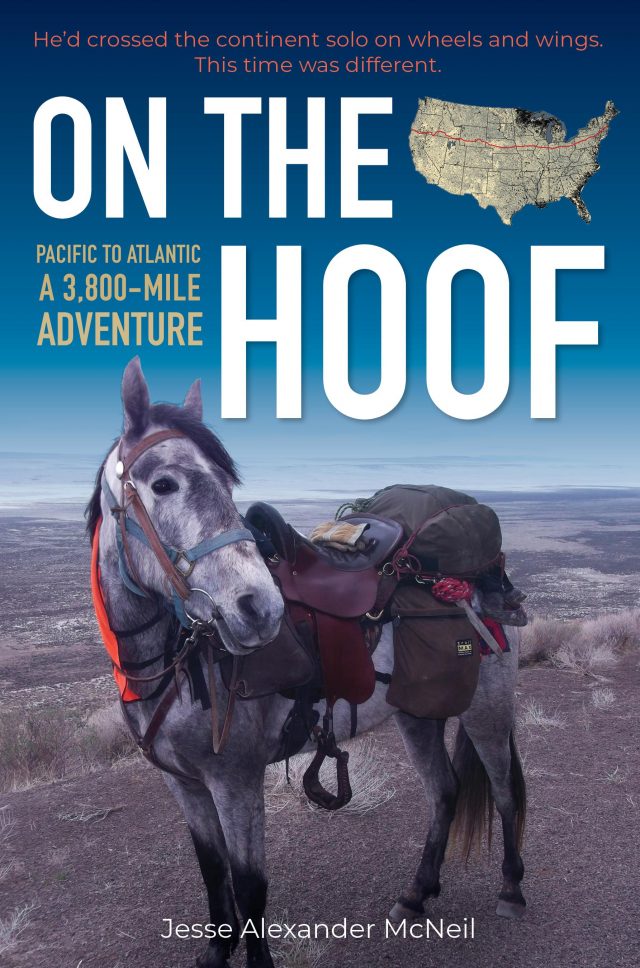 September 28, 2021DeAnn SloanContributorBook excerpt, Trafalgar SquareComments Off on The Fall

In this excerpt from his adventure memoir On the Hoof, author Jesse McNeil shares a heart-stopping moment early in his trek across the country with his Tennessee Walker Pepper. 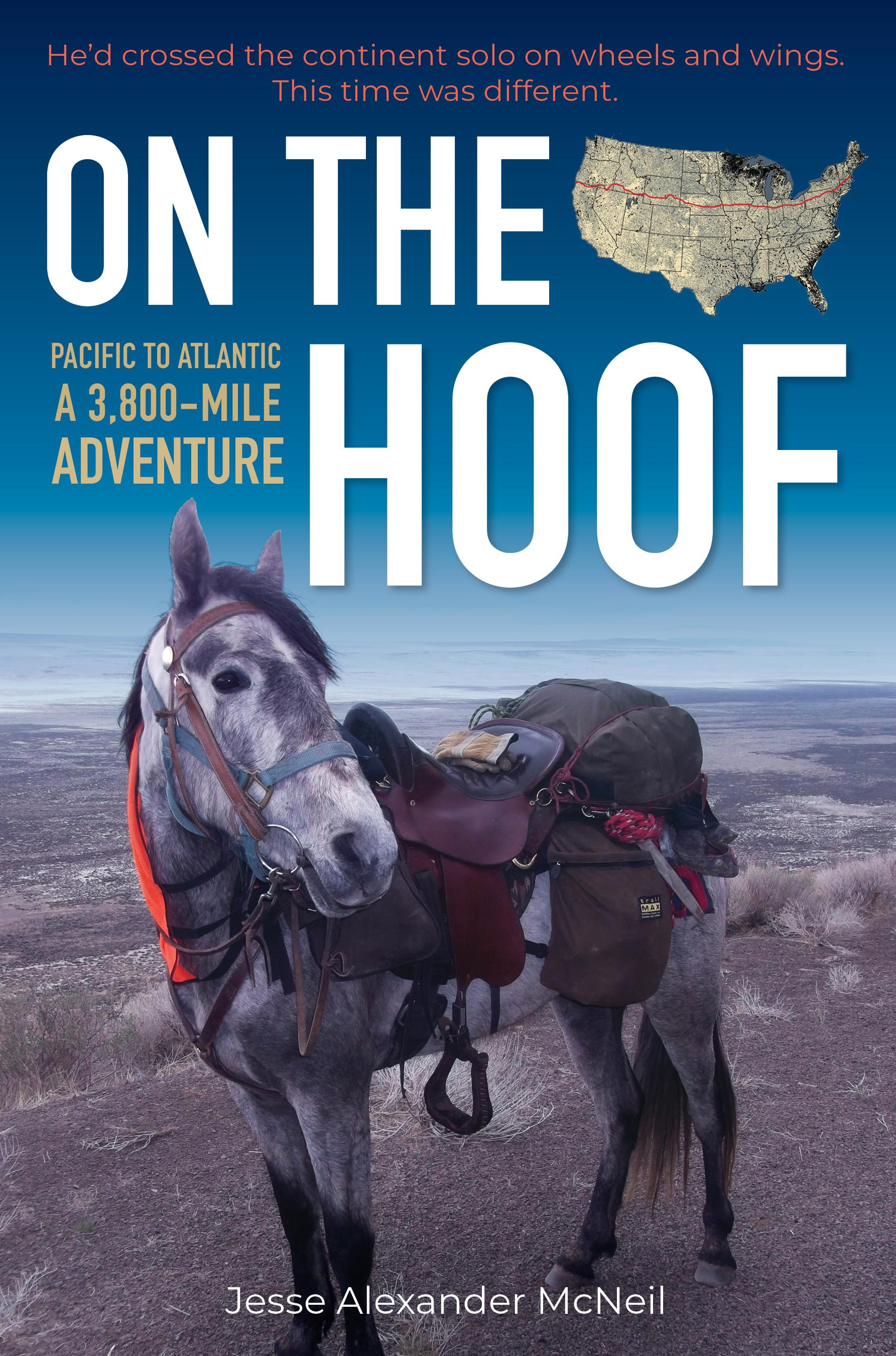 Horses have always been an enigma to me—domestic animals with wild hearts. Sometimes

I feel the same, probably more often than not.

It was two years ago that this journey was hatched while on a long bicycle trip across Canada. I was in the heart of Manitoba on the thirty-fifth day after departing the Pacific, alone, driving hard on the pedals, pushing my whole body into a wicked headwind. My eyes teared and lungs heaved. With the pavement achingly passing underneath and deadening prairie ahead, I shifted my gaze right. There, a beige horse stood quietly against a fence watching my progress, chest and leg muscles poised to run, mane blowing in the wind.

“Now that’s what I should be riding!” I yelled across the prairie.

For another two hundred feet we stared at each other while I ground the bicycle wheels forward. Eventually the horse turned away, and I did too. But I never forgot seeing that strength penned in—not for the rest of the way to the Bay of Fundy, not when I was pitching fish in Alaska to buy a horse of my own, nor through that long winter when I trained myself to ride Pepper. There was something scary but riveting in that wildness that wanted to be released—and I wanted to throw a saddle on that energy and cruise the countryside, like a Western portrait of pioneer life.

But venturing into this continental journey by horseback hadn’t come easy. Training was awkward, with both of us green, impressionable, and nervous of the other—even more so on the icy Montana roads and snowy fields, each fearing what the other might do.

Besides a November hunting weekend in the Crazy Mountains, I’d had only one other experience on horseback. Fifteen years ago, in Australia during a year off from college, I swung into a saddle thinking it would be easy. Minutes later I was gripped in a full gallop, frozen by the immense power beneath me as my horse chased another horse. Then an abrupt turn threw me off, and the lead horse’s back hoof smacked me in the gut as I headed for the ground. An outline of that hoof bruised my stomach for days. Still, that impression of good luck was good luck after all—for not having my head in the way.

Regardless of the constant Montana cold, Pepper and I kept at it. The days stretched to weeks then three months, until mid-March, when we loaded into a truck and trailer, bound for the Oregon Coast and an early start on the best traveling weather.

Tackling such adventures with little preparation—and often skill—appeals to me. Little compares with living a slice of life not yet lived, then learning as it happens. I imagine traveling by horse will feel just the same, while transcending the present.

In the morning we set off again, this time staying on the twisty Forest Service road. After an hour and a half we intersect with the trail we’d sought the day before—a mere two hundred yards from where we were stuck in the manzanita maze, high on a hill. A bullet-pocked trailhead sign directs us onto a worn path.

We cross the rest of Packsaddle Mountain with ease and descend to the rocky Smith River, one of many rivers threading through the steep ridges of the Siskiyou Mountains. I sink in my saddle to duck under the branches and see speckles of whitewater punch through the green undergrowth. I tie Pepper to a vine maple to scout the rest of the way alone. As I leave she paws the ground.

“It’s okay, Pep.” I walk back and pet her. Though it’s our third day, she’s still uncomfortable being alone in the forest. I back away, and she paws again.

Hesitantly, she stops. She needs to learn to stand quietly—and this might as well start now.

At the riverbank I see the current’s not as wild as it sounds, but far from easy to cross. Where the map shows a trail there are actually rapids, deep and wide, Class II leaning to III. I curse myself for not knowing better. Of course, the spring runoff in the mountains is gonna swell the rivers. 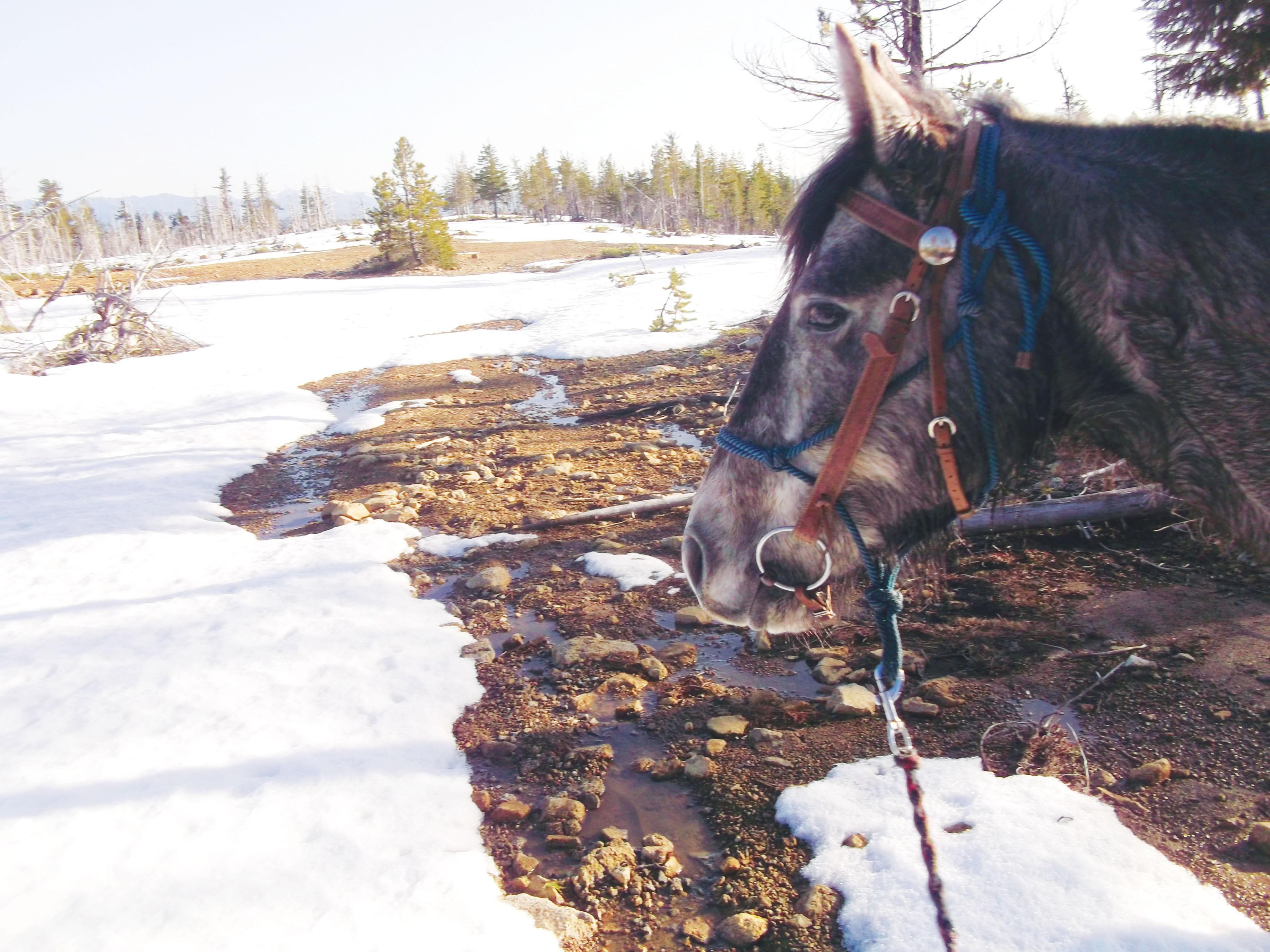 I return to Pepper, and together we walk north along the river’s edge to find a better way across. The foliage is still wet from a short rain last night, soaking my jeans where my waterproof chaps don’t cover. When I can catch glimpses of the river, it’s still wide and fast. Eventually, finding no new options, I turn us around. As we retrace, I see Pepper does as well as a machete for clearing underbrush.

We then explore south among towering redwood and Douglas fir on hilly ground. I lead Pepper up a soft, squishy incline to survey our surroundings.

Suddenly, the rope rips from my hand. I turn to see Pepper flipping backward down the slope. Snapping sticks and flapping saddlebags shatter the silence. Hide and hooves blur. She somersaults a full rotation and lands hard on flat ground. I leap down the hill, and race to her side as she dizzily raises her head. She looks at me, wide-eyed and confused, then thrusts her neck upward, readying to stand.

“It’s okay, Pepper. It’s okay, easy… easy… relax…” I force myself to remain calm, holding back the fear that she might’ve broken a bone.

She lays her head back down and closes her eyes. I’m stunned—it’s like she understood me.

I run my hands over her, searching for blood and gashes. But before I can finish, Pepper slides her hooves under her body, and in one swift move, lurches up and stands. I jump back to avoid being hit by her lumbering limbs. We then stand together, frozen by the incident. I stroke her sweaty neck, consoling her with whispers as she stares straight ahead. I’m hesitant to let her move, my hand on the lead rope, like a first responder holding a spinal case. But then she breaks from her trance and turns toward a tree ringed with grass, pulling the rope from my hand.

This excerpt from On the Hoof: Pacific to Atlantic—A 3,800-Mile Adventure by Jesse Alexander McNeil is reprinted with permission from Trafalgar Square Books. You can purchase the book here.