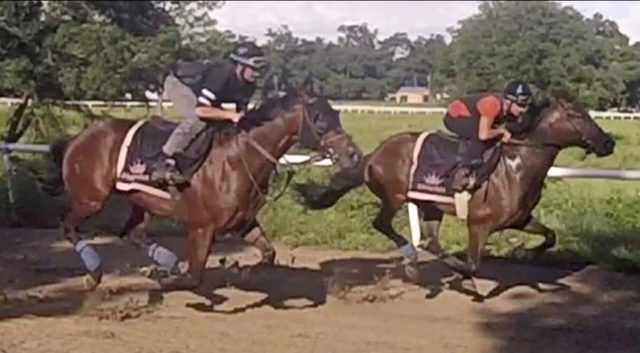 As Spider rehabilitates from the injury to his suspensory ligament, Libby takes a deep dive to find out more about his background.

Following the announcement that the Retired Racehorse Project‘s 2020 Thoroughbred Makeover and National Symposium, presented by Thoroughbred Charities of America, will be postponed to 2021, competitors have been working to decide what comes next for them and their mounts. Today, blogger Libby Henderson delves into her horse’s background.

It is July already. Actually we are half-way through July! The Makeover is looking very close and very, very real. My panic is rising. Spider (JC Gossamer) is still recovering, and while I wish I could say that we’ve stayed on a strict schedule and that we are making progress on the schedule his doctors gave us, I can’t. Between work and the constant afternoon thunderstorms that are the hallmark of summer life in Florida, there has been a lack of consistency in his rehab. I guess I can claim that it is an “active” pasture rest, but in reality, he’s just feral and running/walking around a lot on his own, with structured walks once in a while. 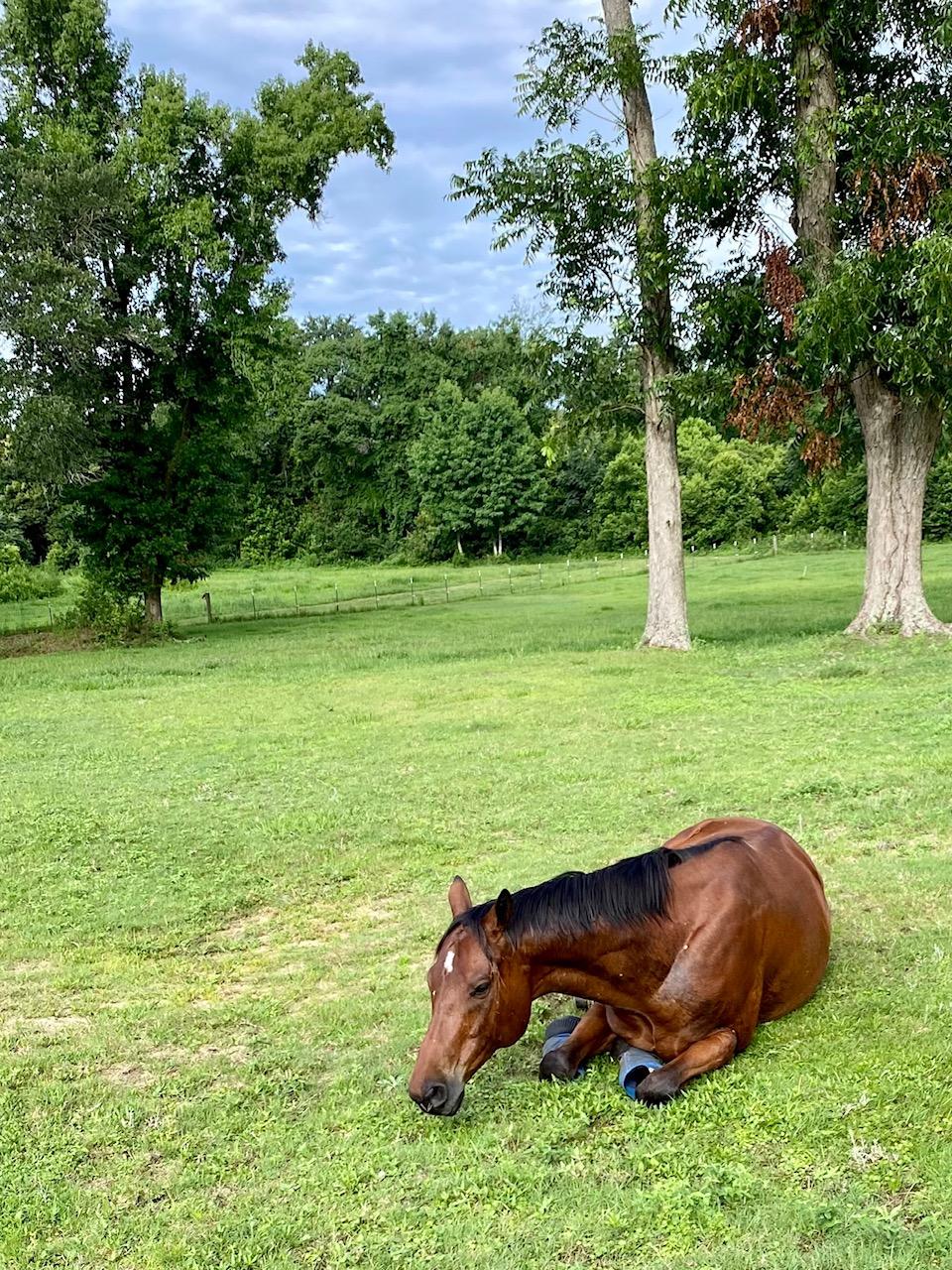 In the meantime, we’ve still been busy! My friend, Kristina, who has helped so much with Spider, brought home a new OTTB mare, and the process of learning about her and her history has allowed us to finally fill in a few gaps in Spider’s background. 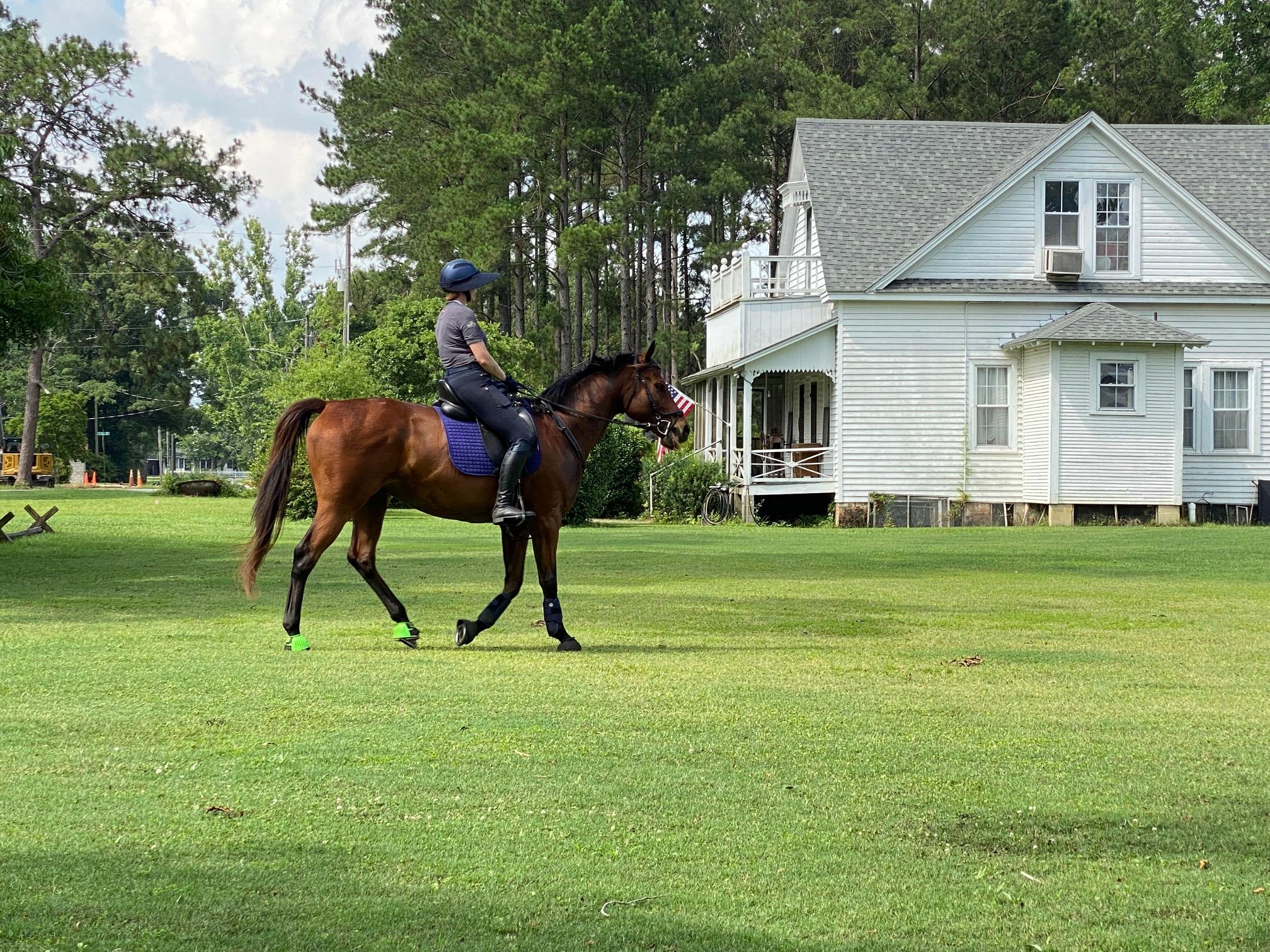 Kristina on Spider for an under saddle walk. Photo by Libby Henderson.

I’ve told the story of how Spider came to me, all the way back in my first post for HN A Special Kind of Stupid, where I shared that I wasn’t even horse shopping when I got Spider straight from the track. What I didn’t discuss previously was Spider’s history and background.

When you start research an OTTB’s bloodlines and history, sometimes you’ll hear things like:

“You can’t ride the papers. It just isn’t that important.”
“I don’t know why you do all that research. What matters is the horse that you have today.”

It is true that you don’t ride the papers and it is also true that you have to ride and work with the horse that you have before you. It is, however, important that you know as much about the new horse you have or have taken in training as you can. Like people, horses are an amalgamation of all the experiences and education they have been exposed to throughout their lives. Going forward without as much information as you can gather can be disastrous. 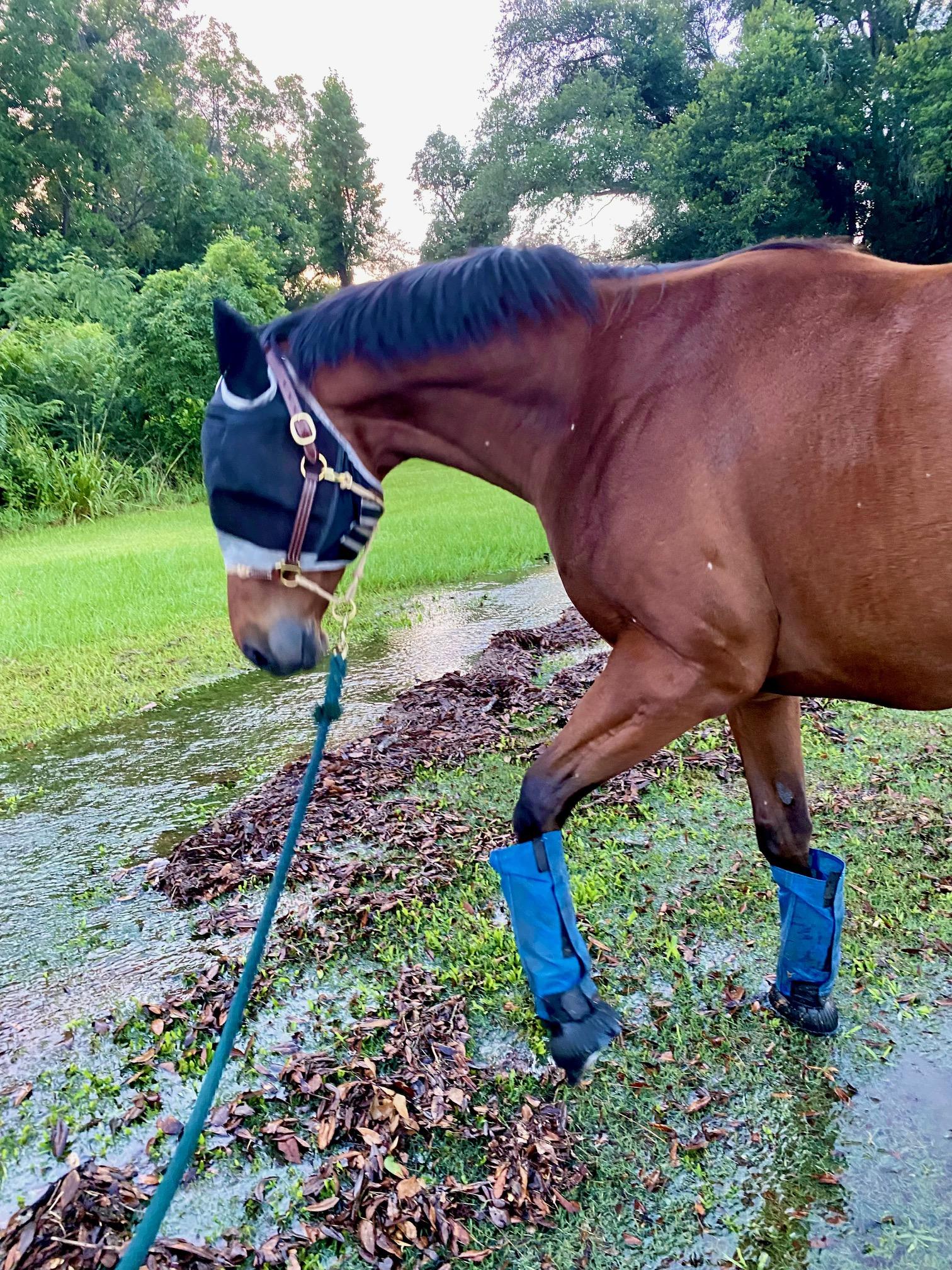 Spider going for a walk and playing in the water. Photo by Libby Henderson.

For instance, you can get an OTTB that has been started for the track, but never raced, and has spent years in a pasture. And since she knows something about being saddled and bridled, if you make the mistake of assuming she is more than super green, you can get into a bad situation really quickly. I believe this is how Thoroughbreds get some of the reputation as being “too hot” or “too difficult” – they get dropped into situations that are radically different from what they have been exposed to, and when an assumption is made about how well trained the horse is without research, either the horse or the rider can get seriously hurt. Finding out as much as you can about your new horse can be a matter of safety for you both — and is really interesting in any case! 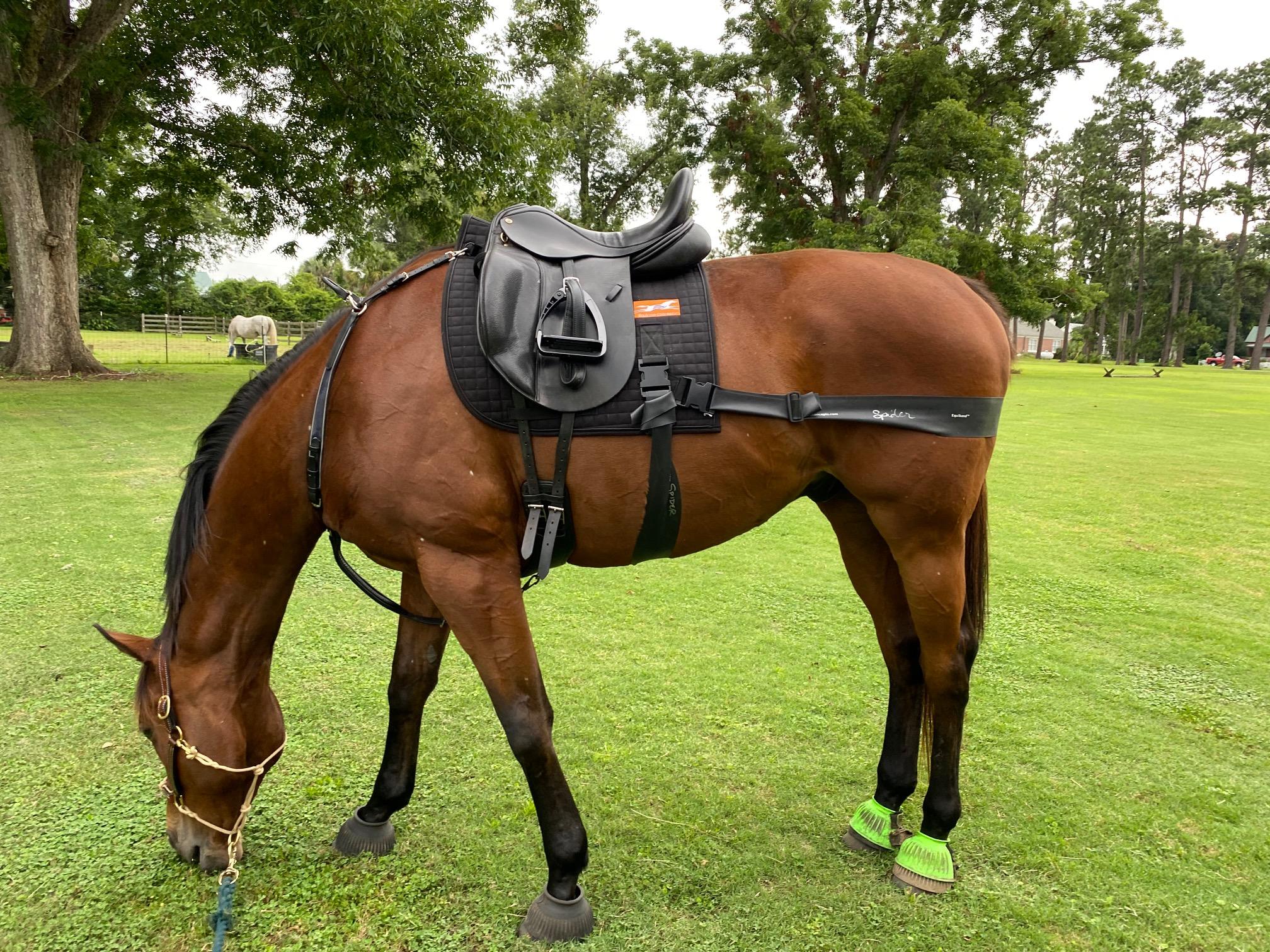 Spider walking in his equibands. Photo by Libby Henderson.

The Retired Racehorse Project has a great webinar on how to research your OTTB and locate the information you need to reach out and ask questions (you can watch it here).

The pedigree information is really interesting, and there are some great resources available to help you research your horse’s ancestors and which lines are considered good prospects for different sports. In fact, I’ve made several good friends who also have Ghostzapper babies, and we’ve formed the #ghostzapper clique. (You can even find our posts through that hashtag on Instagram!)

In order to know more about your OTTB’s story, you have to dig a bit. In some cases, you’ll look your horse up in Equibase and see that the breeder and owner are the same person, and if you can find contact information for the breeder easily. In Spider’s case, Equibase shows his breeder’s name, but his breeder does not have his own farm and has been difficult to track down through the internet and through social media. However, his Equibase report shows that he was consigned through Lane’s End Farm, and was sold at the September Yearling Sale at Keeneland.

The buyer at Keeneland was also a bit of a dead end at first, because he never raced him, and though I could find information on him through Google searches, it was difficult to find contact information for him. There are no results from his two-year-old year at all. The next record for him is when he shows up with an official work at Peninsula Farm in June of his three-year-old year. What was confusing at this point is that his papers show a transfer in June of 2018, to an owner that doesn’t show up anywhere else.

His only race was in September of 2018 at Gulfstream Park. Equibase lists his owner and trainer for that race, but they are totally different that the name on the papers. And the additional names mentioned by the trainer I got him from don’t appear on his papers. So, I was frustrated at every turn.

That is, until last week, when I finally found the right connection! The lovely mare that Kristina brought home was, at one time, owned by the same buyer that had purchased Spider at the Keeneland sale in 2016. I reached out to the connection that had originally started her transformation from broodmare to sporthorse, just in case she could help me make contact with Spider’s former owner. She couldn’t do that, but it turns out the next name on Spider’s papers was her fiance’s cousin! And he put me in contact with the actual owner, who he had worked for, and was the owner of the stable name that was the next name on his papers.

This owner called me immediately, as he was so excited to hear an update on Spider! He told me that Spider had trained like an absolute beast in Ocala, starting in June of his three-year old year. He was able to tell me how he had acquired him, and confirmed that he sat in a field for his two-year old year. In Spider’s only race, on the video, it appears that he breaks from the starting gate just fine, but absolutely nopes right out of running and just stops. The race card (also available on Equibase) states “ease to wire, walk off.” And that is just what his former owner said he did. He says that it was the strangest thing – almost as if he decided that this career just wasn’t for him. He told me that he walked him for four days and then tried one more workout and Spider just said NO. So, he made arrangements for him to be placed with someone in Ocala that would find him a show home, he thought, and decided not to push him any farther. 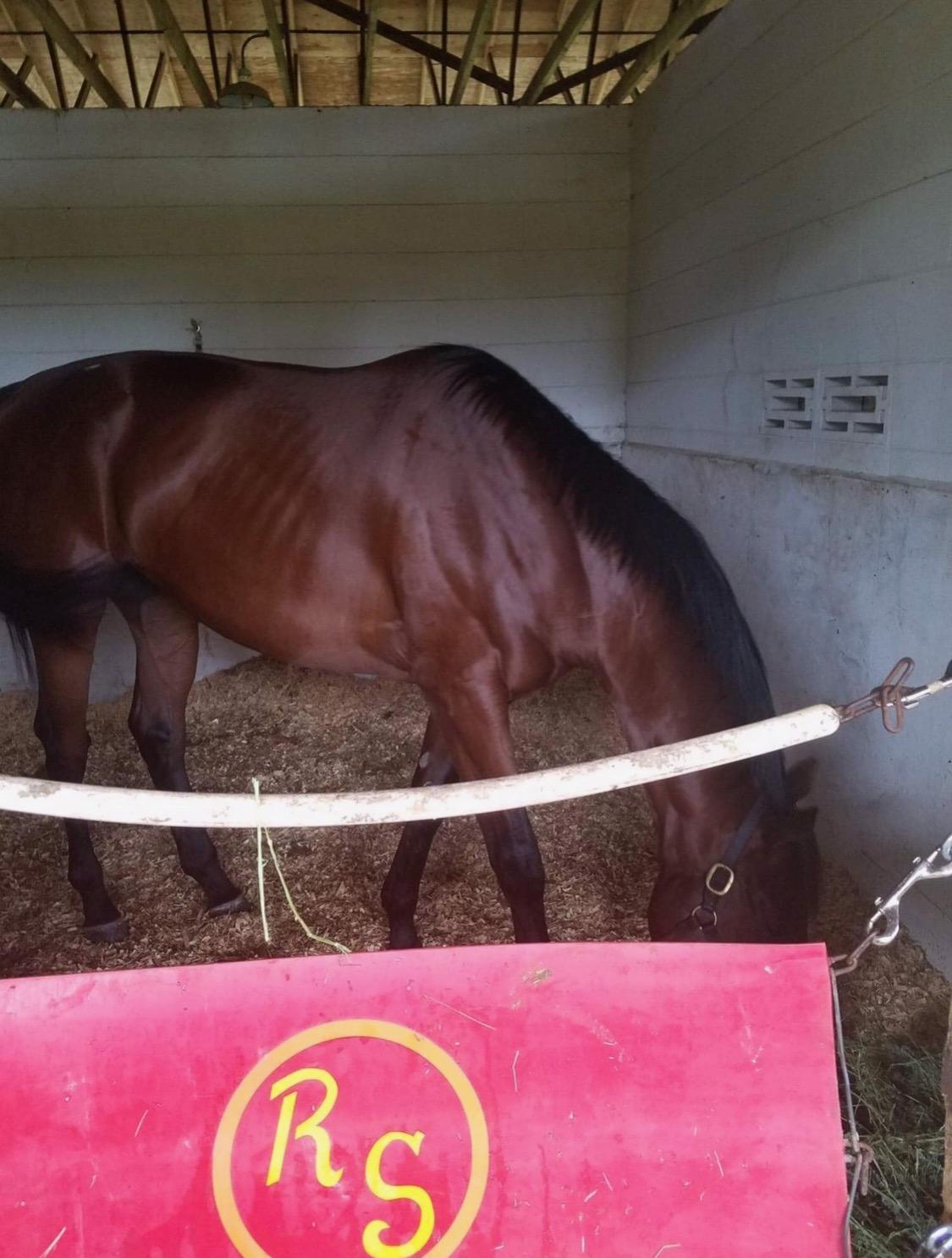 Spider in his stall at the training center. Photo by Rick Santos. 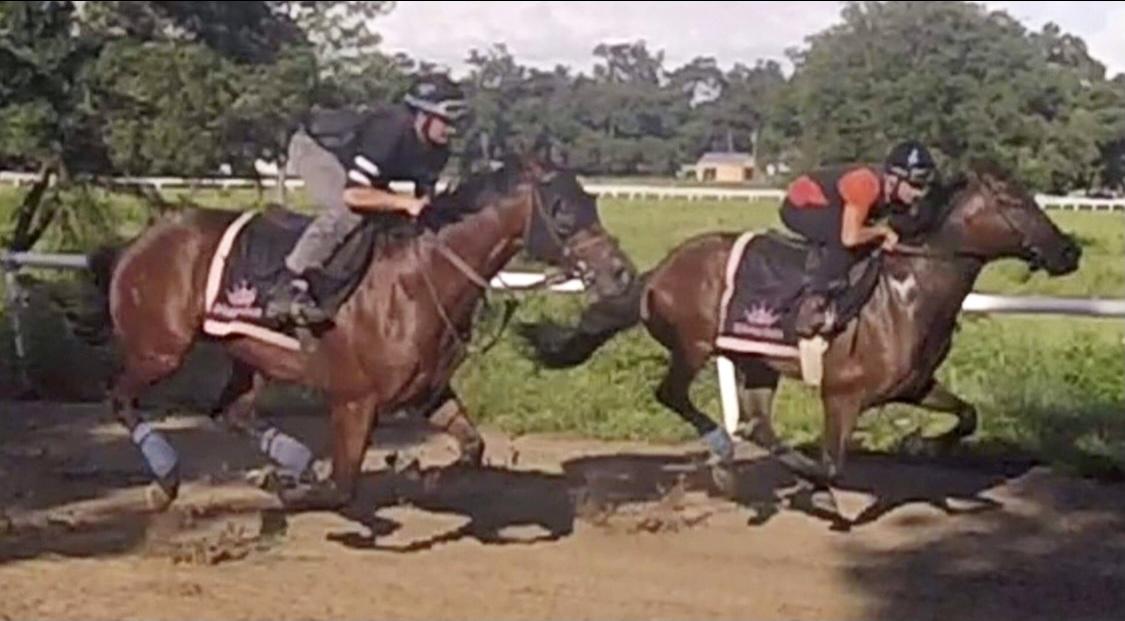 Spider working out at the training center in Ocala. Photo by Rick Santos.

Spider made one more attempt at racing with another trainer before actually heading to his next career, but never found his racing mojo again. Instead, he is living the lush feral life with me. It was wonderful to talk with an owner that had loved him and had really had high hopes for him. I would still love to know why a horse with his breeding and good radiographs sold so low as a yearling, but I may not be able to track down that information.

We are still Not Giving Up and have another appointment at the University of Florida at the end of the month. Hopefully we will be cleared to return to work – especially if we can manage more rehab work between now and then! 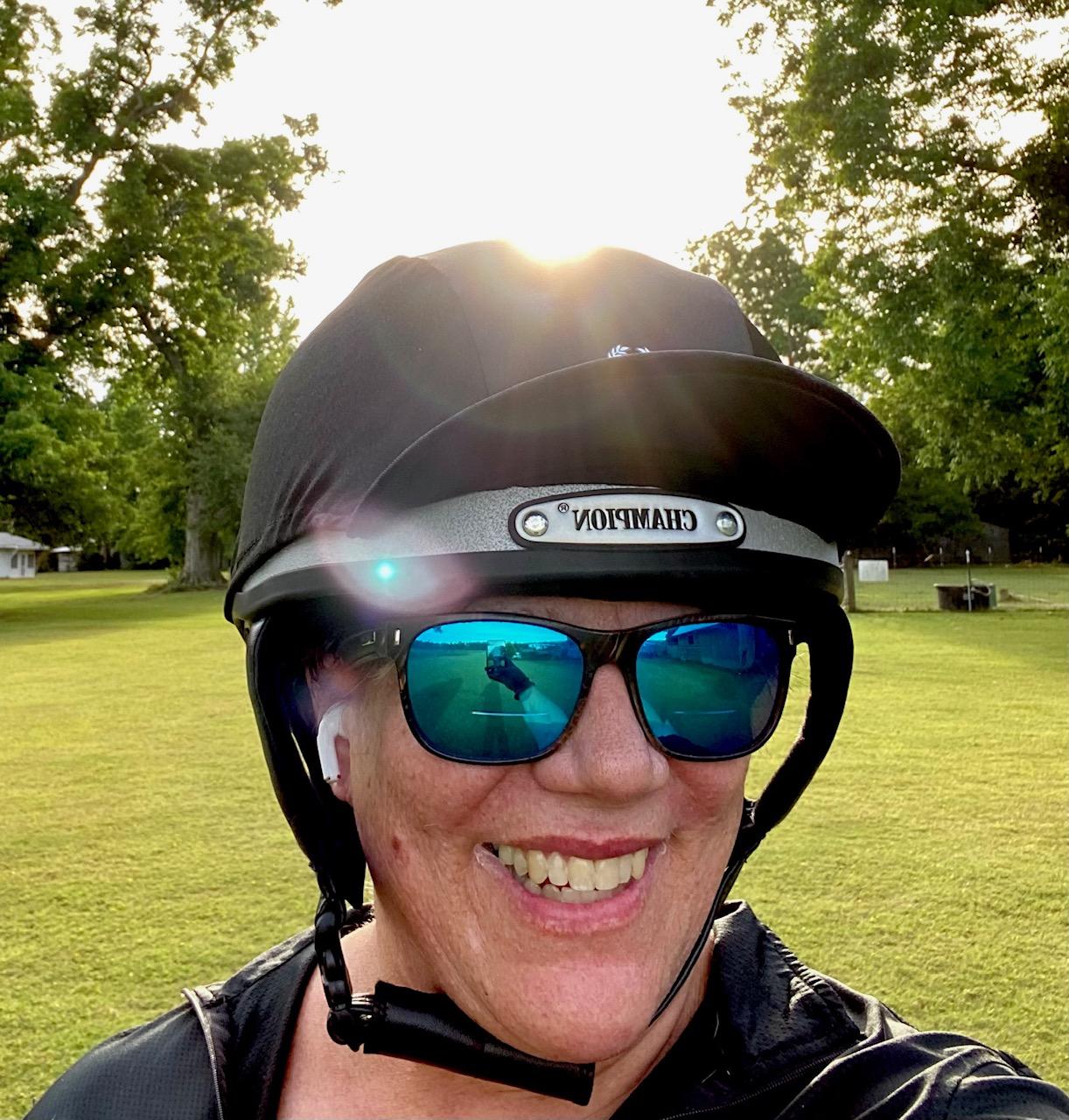 Me smiling and being positive that we will accomplish SOMETHING this year! Photo by Libby Henderson.