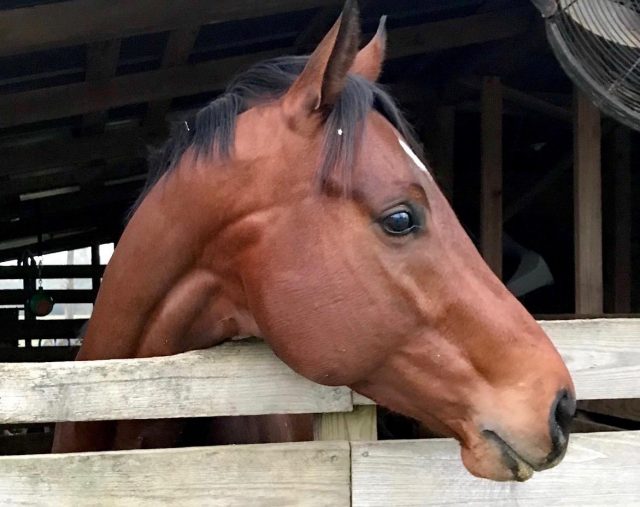 “But, I AM a special kind of stupid. And so the overweight, middle-aged, amateur said, ‘Put him on the shuttle on Saturday morning, and I’ll pick him up in Ocala.'” Thus began Libby and Spider’s 2020 Makeover journey.

For 616 accepted trainers, the journey to the Retired Racehorse Project‘s 2020 Thoroughbred Makeover and National Symposium, presented by Thoroughbred Charities of America, has begun! Over the next eight months, four of those trainers will blog their journeys, including their triumphs and their heartbreaks, successes and failures, for Horse Nation readers. Today, meet blogger Libby Henderson.

It all started innocently enough in January of 2019. “Hey, look at this horse on Facebook, and let me know what you think.” A light bay horse with a star — and a “tendon.” I wasn’t looking for myself, I really wasn’t. I’d been keeping my eye out for a stoutly built, bay, Thoroughbred mare, preferably under 16hh. But a 16.2+ four-year-old colt with a tendon injury? Wasn’t on my wish list. 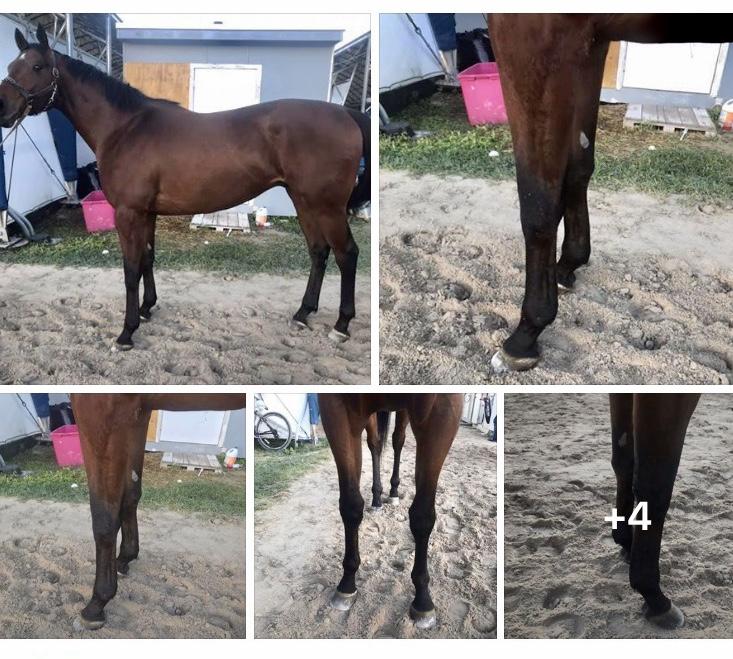 I talked to the folks who were trying to place him. I talked to the vets involved in his diagnosis. I consulted my bevy of veterinary experts. And I struggled with whether he needed to come to me.

Seriously, though, who was I kidding? All of my special horses have come to me when I wasn’t looking, and all have had “issues.” This guy may not have been on my wish list, but he was in my wheelhouse.

Except – we were still recovering from Hurricane Michael. I’d watched the roof lift off my barn in the middle of the storm. I’ve got only a couple of stalls when things are normal, and while I had a lot of past experience with stall rested horses, bowed tendons, wrapped legs and hand walking, I’d not done it in years and my non-horsey husband was not crazy about the idea (to put it mildly). It was only three months after the storm and we were still trying to dig out of the mess it made of our farm, and our whole town. 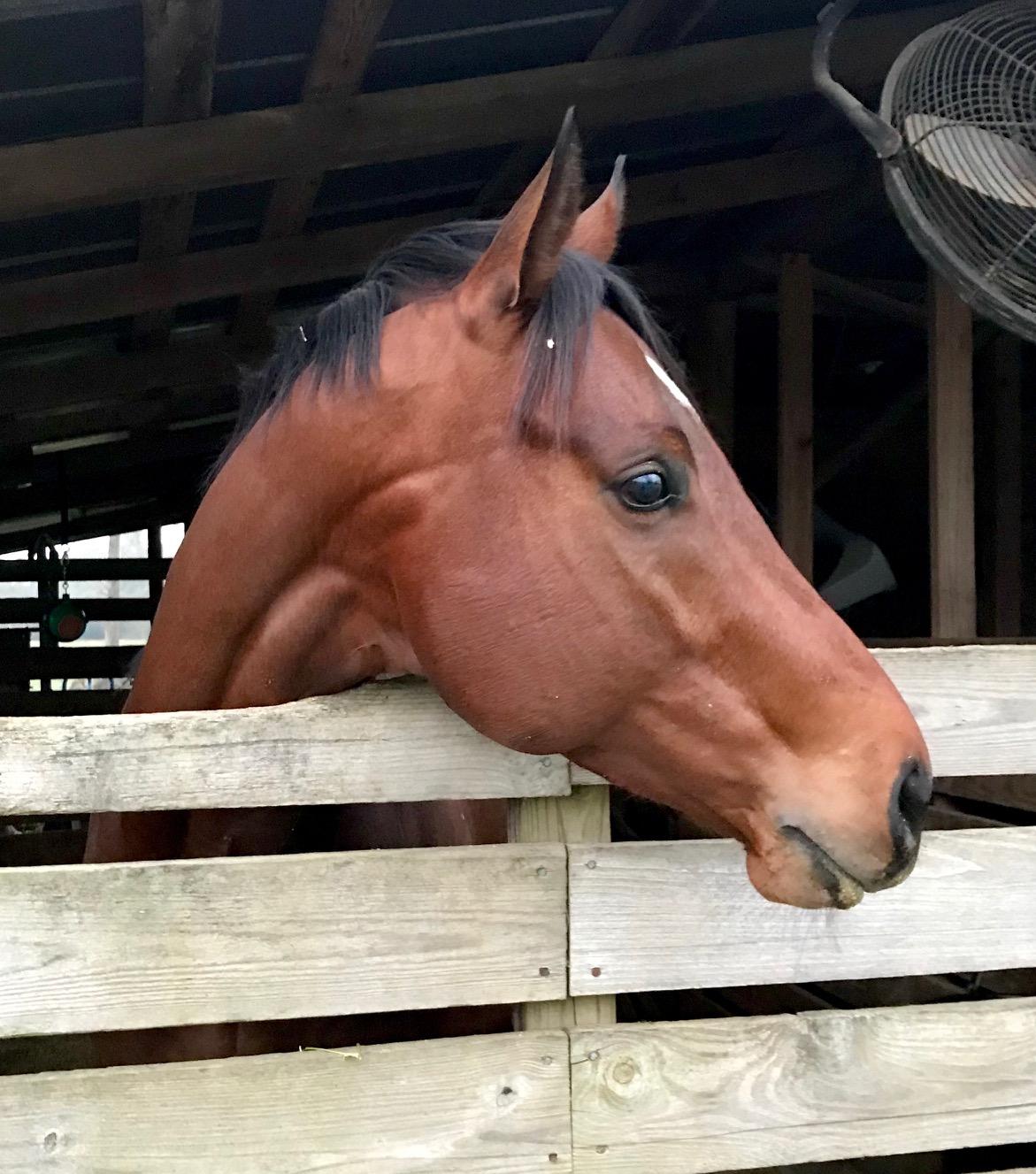 But, I AM a special kind of stupid. And so the overweight, middle-aged, amateur said, “Put him on the shuttle on Saturday morning, and I’ll pick him up in Ocala.” My mare was due to go to Ocala for a month of training on Saturday anyway, and instead of coming home with an empty trailer, I’d bring Spider (JC name Gossamer – Ghostzapper x Take D’Tour x Tour D’Or) back.

I did mention he was a stallion, right? And we are a small farm, with a hurricane damaged 100-year-old barn and no special stallion paddocks. And as his trainer said when he called to tell me he’d loaded onto the shuttle to Ocala, “Oh yeah, one more thing – he bites.” A special kind of stupid indeed. 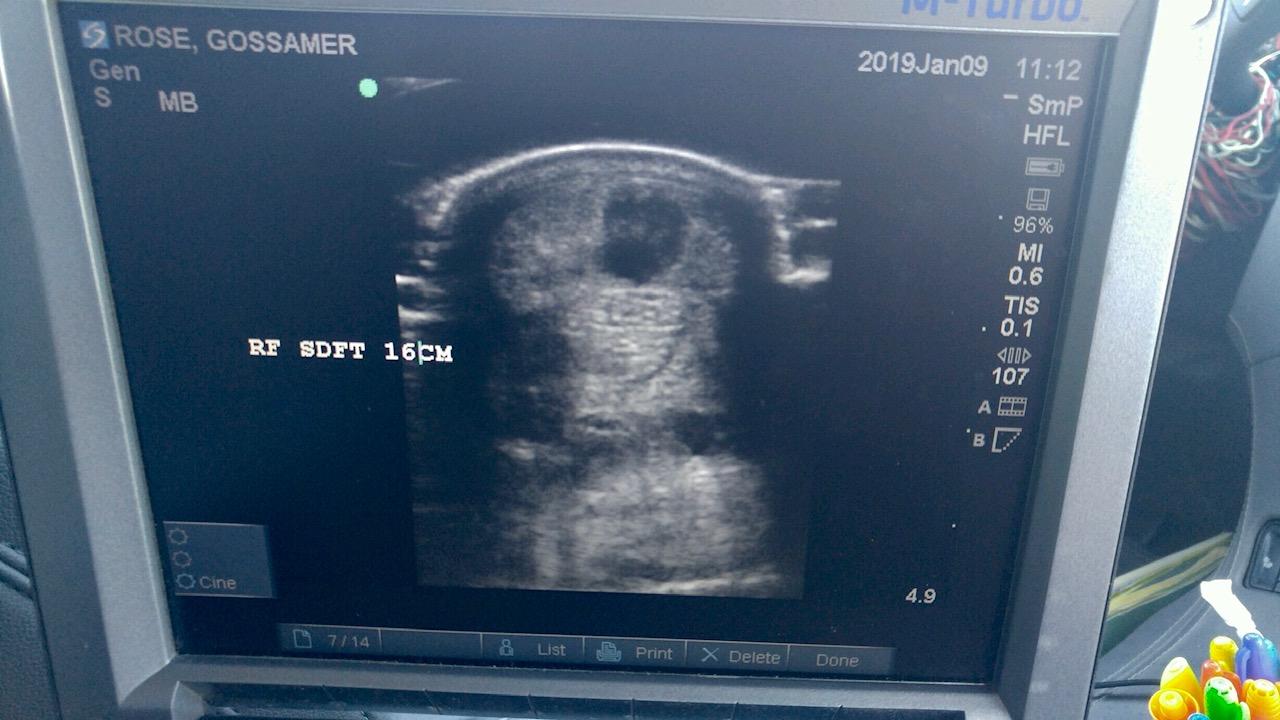 The vets at the track that did his ultrasound sent me photos of the scans so that I could share them with my council of vet buddies. My friend and vet guru at the University was kind enough to evaluate the scans and come up with a plan that would have him gelded, might involve surgery on the tendon and would have done the advanced therapies recommended for this type of injury. His superficial digital flexor tendon had a 75% core lesion – which is a honking big hole in layman’s terms. I also spoke with a very experienced racetrack veterinarian friend, and he said, “Well, you can do the surgery, you can do stem cell, you can do PRP, and in about a year, you’ll have a horse that is good as new. Or you can throw him in a field, not look at him, and in about a year, you’ll have a horse that is good as new.” So, I took a deep breath and decided to go in the middle. I’d stall rest him, get to know him a bit, and then, at 60 days, check the tendon and have him gelded if the tendon was strong enough to withstand surgery and then plan to toss him in a field. 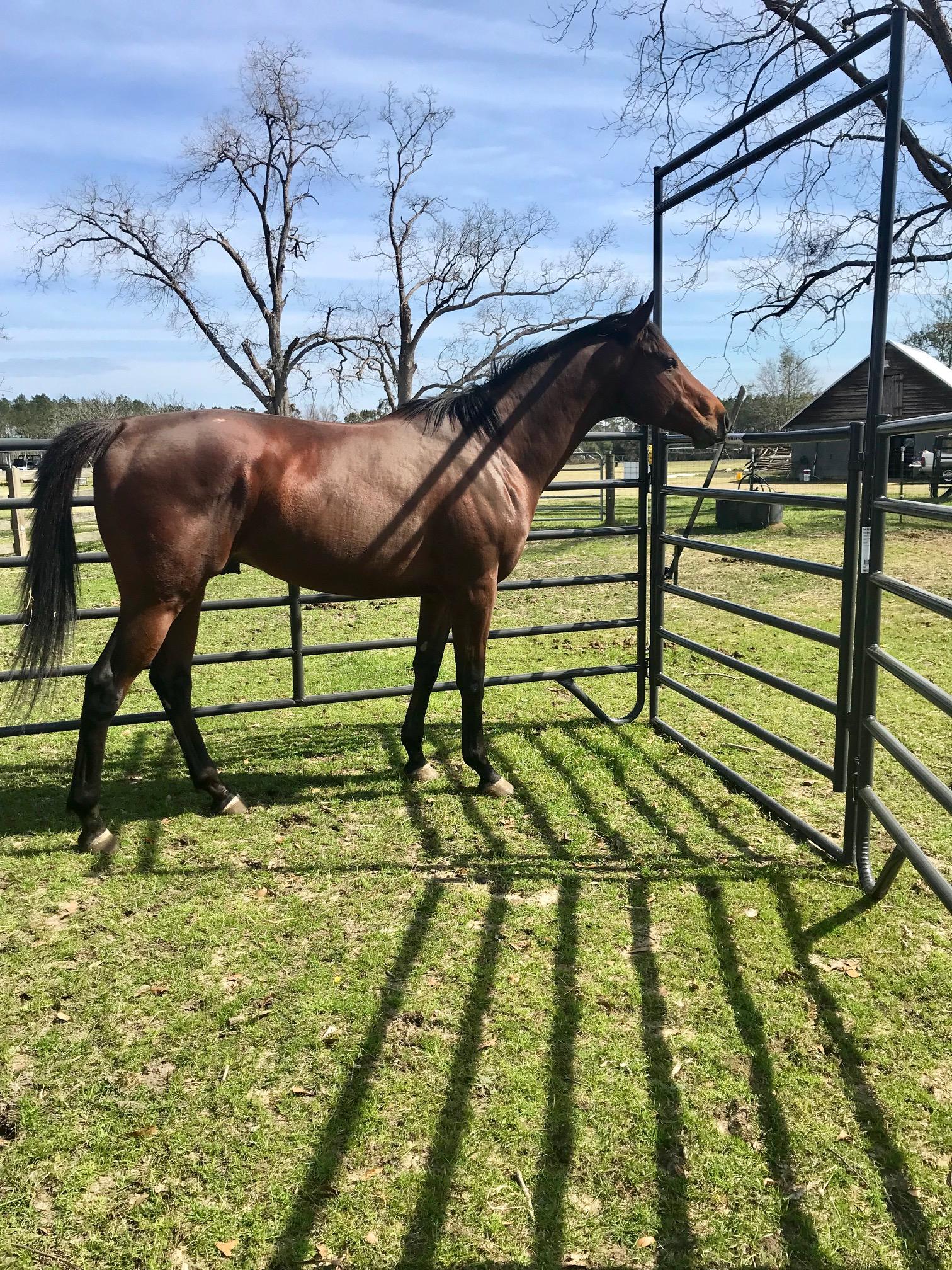 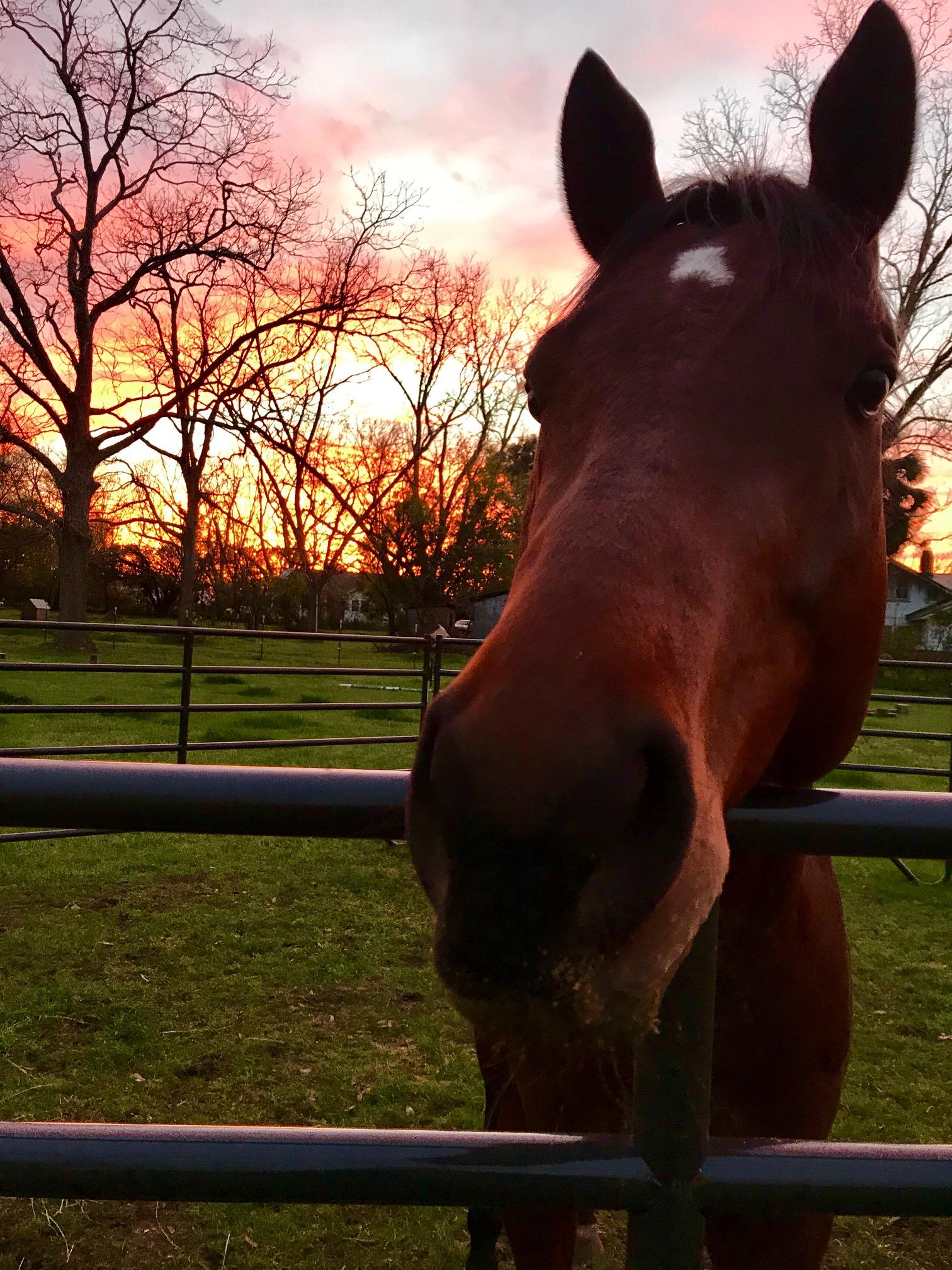 The first few months were rough – not gonna lie about that. I wondered more than once just how the heck I had gotten myself into this, and just who I thought I was. I’m not a professional, in any sense of the word. I’m a fat, 51-year-old lawyer with a savior complex, who hasn’t ridden competitively in years, and whose husband refers to their farm as the “Home for Aged Equines With Issues.” 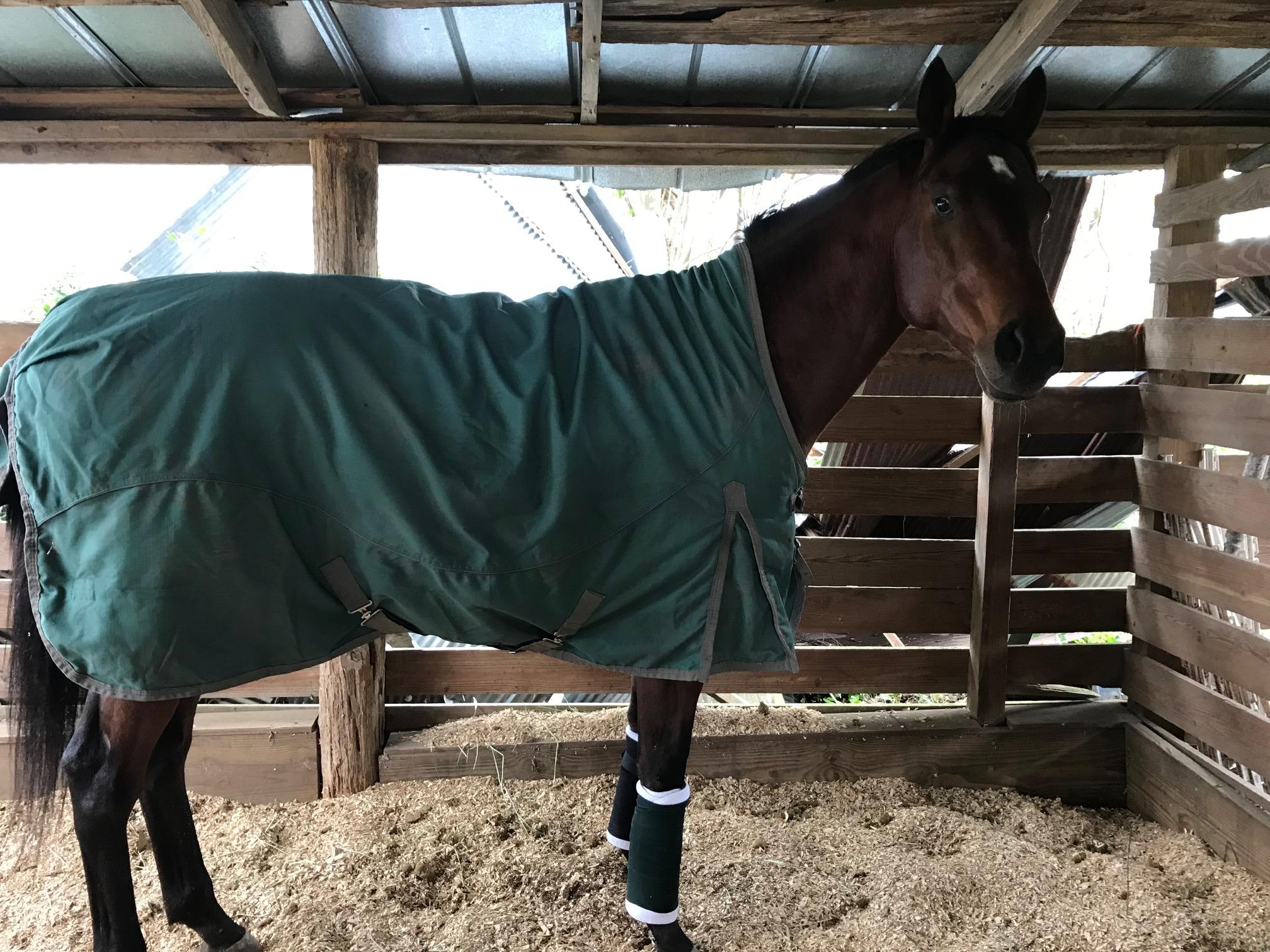 On the other hand, I’ve done this before. My first event horse was a blown-up barrel horse that no one else wanted. My first OTTB raced on the bush track in North Florida before showing up at the sales barn where I leased stalls, with the biggest old bow I’d ever seen, and a bevy of health problems. He eventually competed in eventing with a pro, did some endurance rides with me and taught me (and several vets!) lots of new things.

The only horse I’ve ever sold was an OTTB that came straight from Gulfstream Park and who competed through Prelim with her owner before retiring due to a frustrating medical issue. (Note, though, I take credit for NONE of that horse’s training – I basically put her in a field for a year and let her eat grass. She and her owner achieved all of that on their own.)

Spider’s race record was worse than unremarkable. He had one start, in September of 2018, and the race card described his 10th (of 10) place finish as “ease to wire; walk off.” That one race did, though, as well as his published works, qualify him for the 2020 Retired Racehorse Project’s Thoroughbred Makeover. I’ve followed the Makeover avidly since the beginning by the participants, and harbored a secret desire to be able to take a horse to the Makeover, but was pretty sure it wouldn’t ever happen. 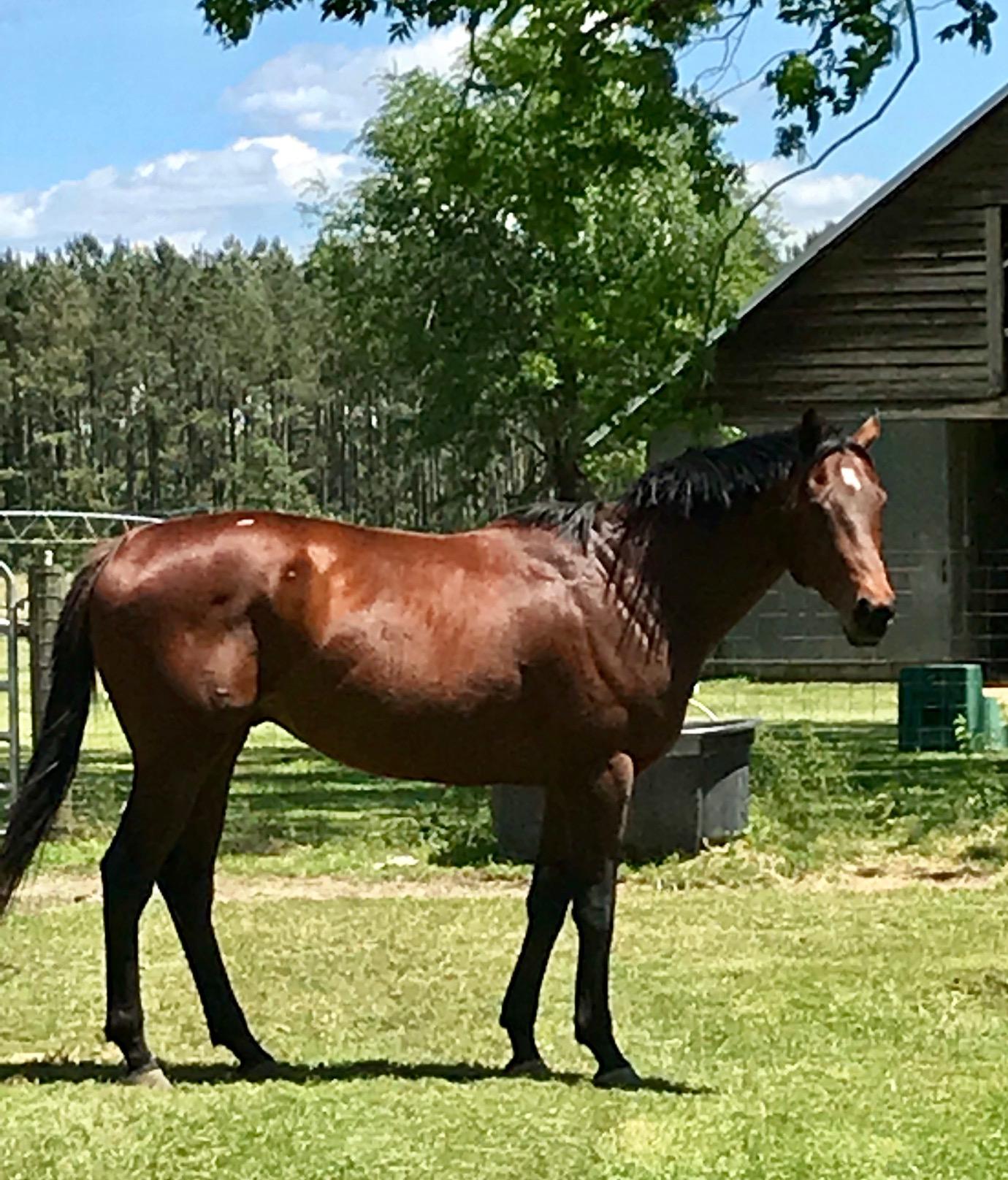 But, the follow up ultrasound of Spider’s tendon looked fantastic, and he was cleared to go to work with no restrictions. He went as a ride-along on our trip to Winter Camp with Tik and Sinead Maynard in Ocala after Christmas and did well with all the aspects of being a Grown Up Horse Who Goes Places (a real benefit of an OTTB, who has gone places and done stuff!). 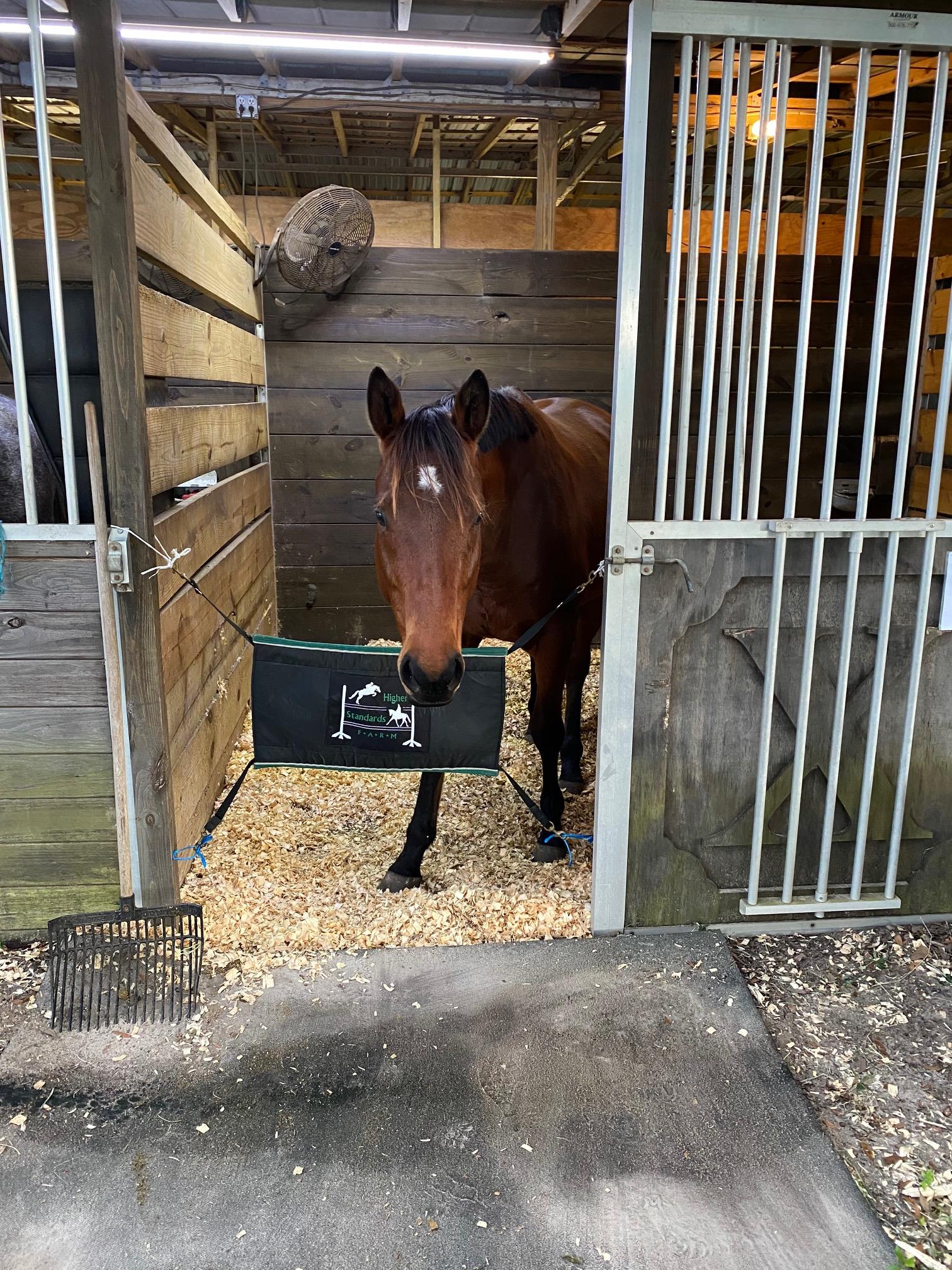 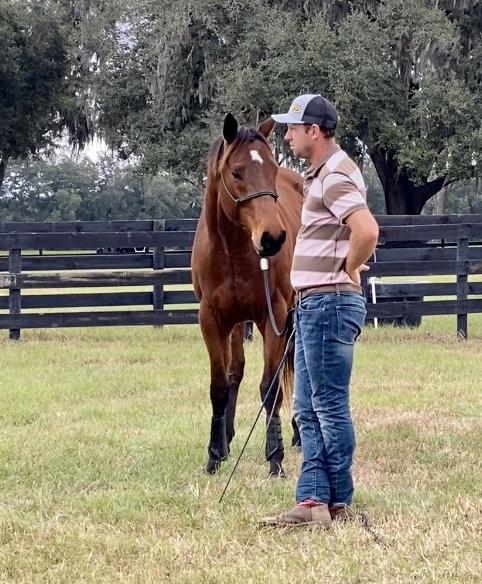 After his year of rest ended in January and I applied and was accepted into the Makeover, the world has gone crazy as we are in a grip of the COVID-19 pandemic. We’ve worked on the ground at home, but I haven’t ridden him yet, as we aren’t sure I need to be his first post-track ride. It is scary to go anywhere, and I haven’t found anyone who wants to come and ride him here. Plus, there are all the questions that weren’t present several months ago – how much danger is there in having people come to your property? How responsible is it to try some training with him – what if someone were to get hurt and take away medical resources needed elsewhere?

But, one thing I do know, is that I’m glad I said yes. Spider has turned out to be a sweetheart who follows me around the pasture, loves cookies, having his ears rubbed and he doesn’t (almost never!) bite now. And miracle of all miracles, he fits into two of my saddles that I’d hung on to just in case I got a horse to fit the saddles (that NEVER happens!). 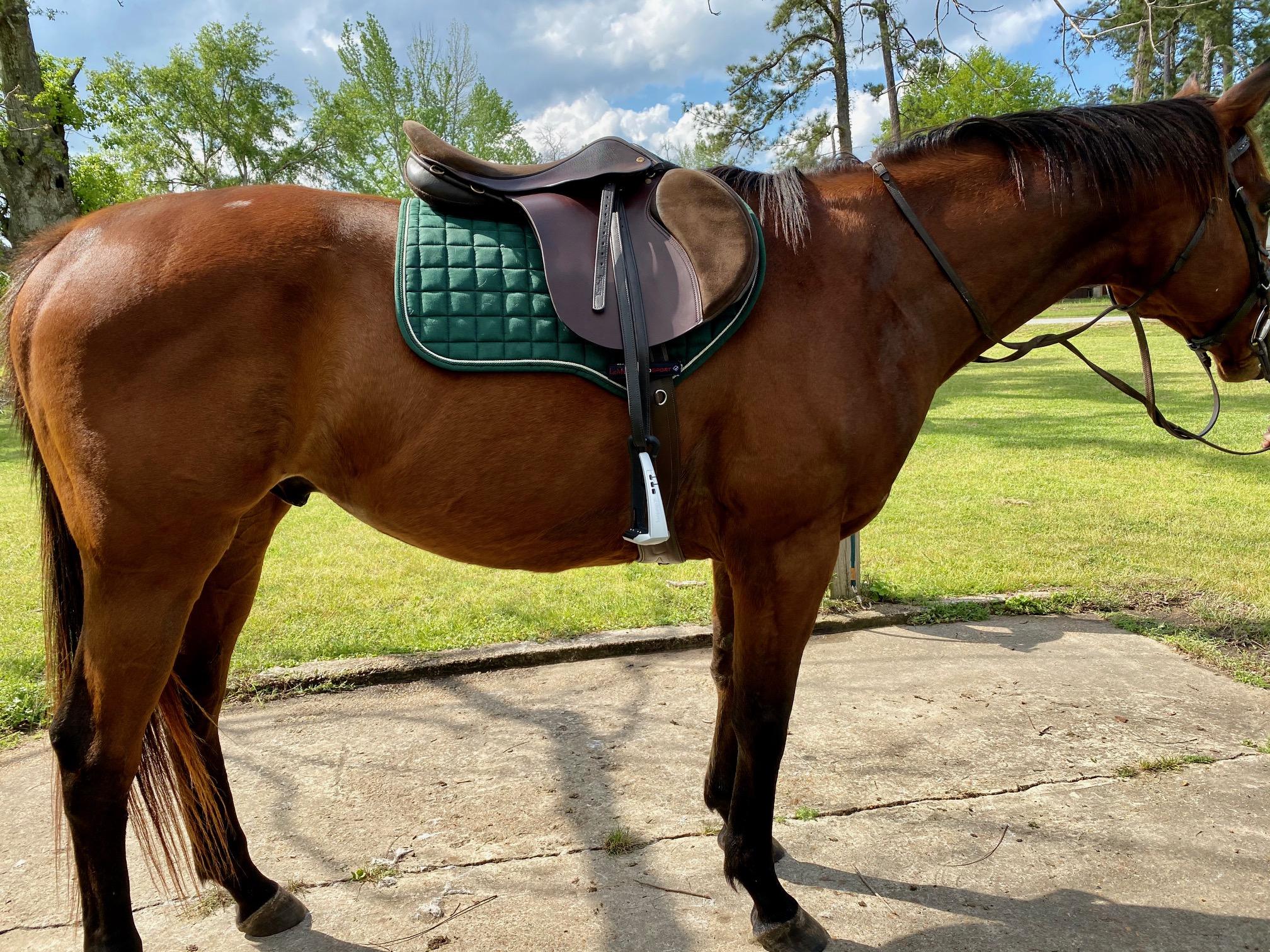 And while we don’t know what the rest of the year will bring, he got the saddles fitted to him today, and lunged a little, wearing a bridle and a saddle for the first time since he came home from the track. 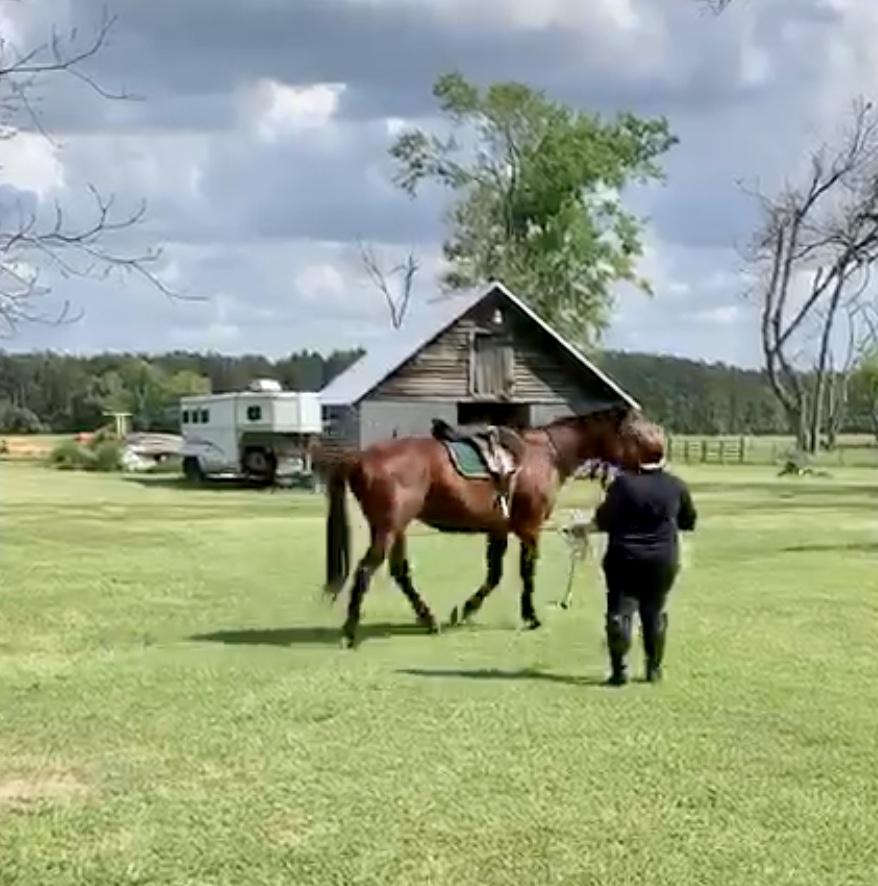 And that made my foolish heart glow. It may be that I needed him more than he needed me. A special kind of stupid, indeed.