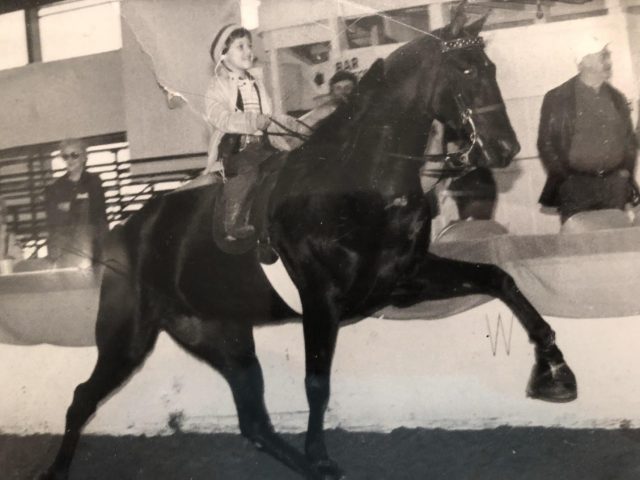 Animal Wellness Action and others advocate for compromise effort that can secure meaningful reforms in the American show horse world. 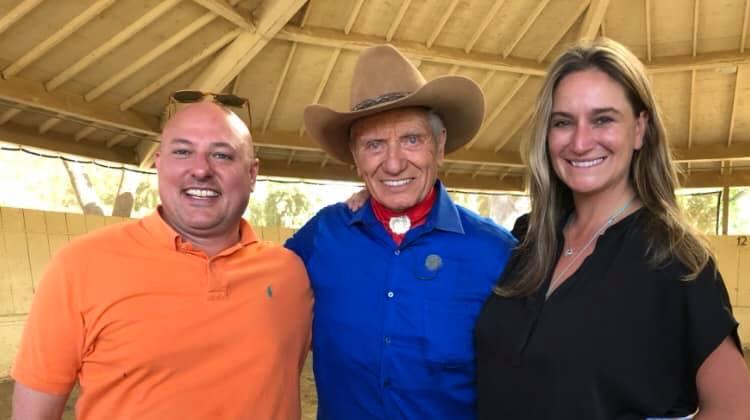 Left to Right: Marty Irby, Monty Roberts, and Ashley Avis at Flag Is Up Farms on June 17, 2021 at The Movement 2021. Photo courtesy of Animal Wellness Action.

I’ve just returned to our Nation’s Capital after a fantastic trip to the Central Coast of California to spend time with my friend Monty Roberts – “the Man Who Listens to Horses.” There, I witnessed some of the most amazing communication between humans and animals I’ve ever seen. Monty was kind enough to ask me, Ashley Avis (the director of Disney’s new Black Beauty film), and Jamie Jennings (a world class horse trainer who joined me last year in receiving an award of recognition from Her Majesty Queen Elizabeth, II for our work to protect horses) to lead the conversation as trailblazers at his signature event – The Movement 2021 – held on Monty’s Flag Is Up Farms, where he’s lived and worked since the 1960s. 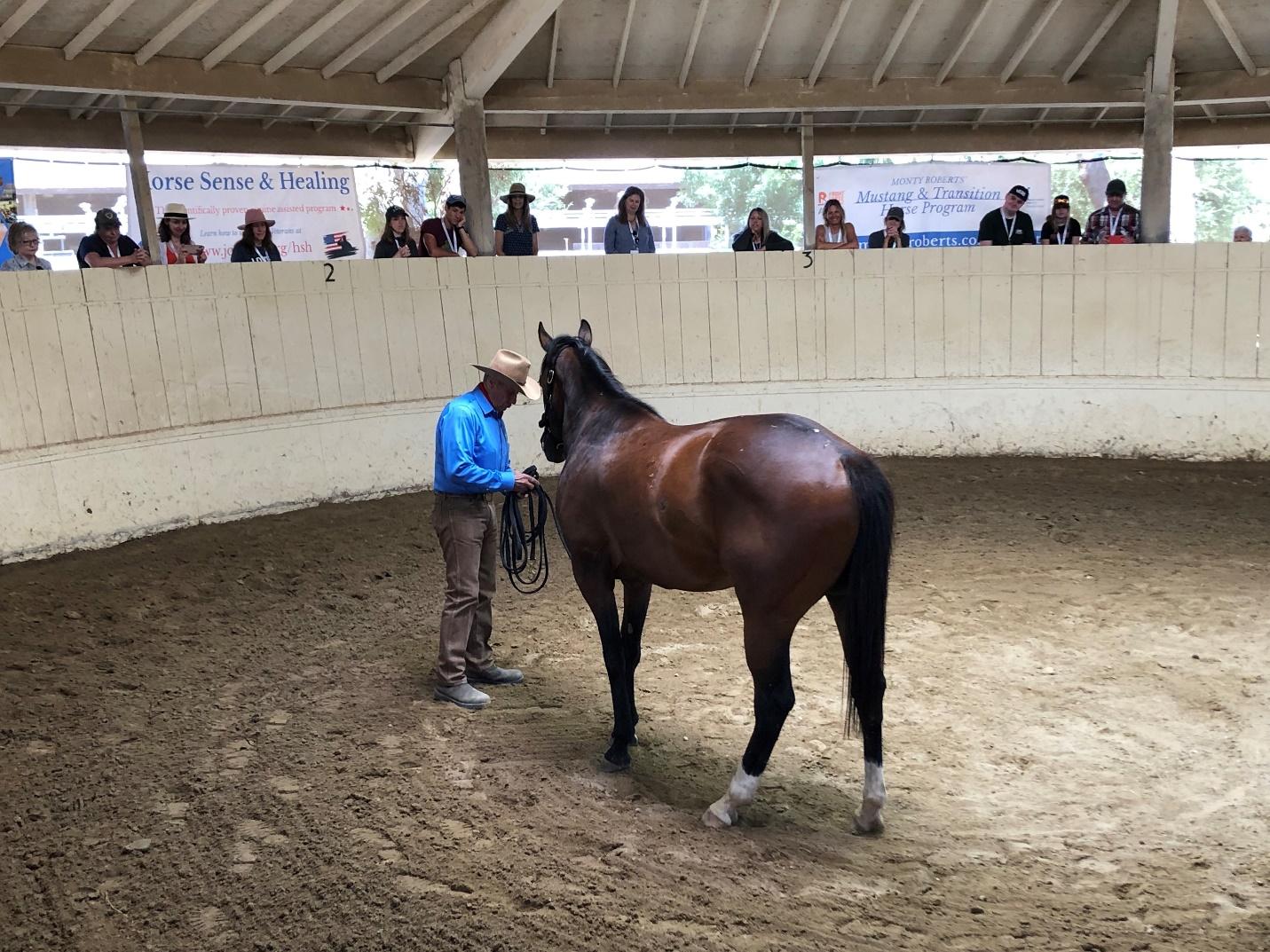 Many of you may have heard of Monty or recognize his work to Join-Up® with horses of all kinds – a communication between horses and humans, where the human utilizes the horses’ language of “Equus” to converse. It’s a dance of sorts that I first witnessed back when we became friends some 16 years ago in Shelbyville, Tennessee. Monty had come to visit us at Waterfall Farms in 2005, where my first job out of college was working for the founder of the Ritz-Carlton Hotel Company, LLC, and my mentor, William B. Johnson.

I was deeply embedded in the world of Tennessee Walking Horses, and the trainers in that breed have unfortunately been prone to use an abusive training method called soring, the intentional infliction of pain to horses’ front limbs by applying caustic chemicals such as mustard oil, diesel fuel, kerosene, croton oil, and other abrasive products to make the horse lift its leg higher and perform an artificial, pain-based gait known as the “Big Lick” that’s prized among some trainers, owners, and judges in Tennessee and Kentucky. 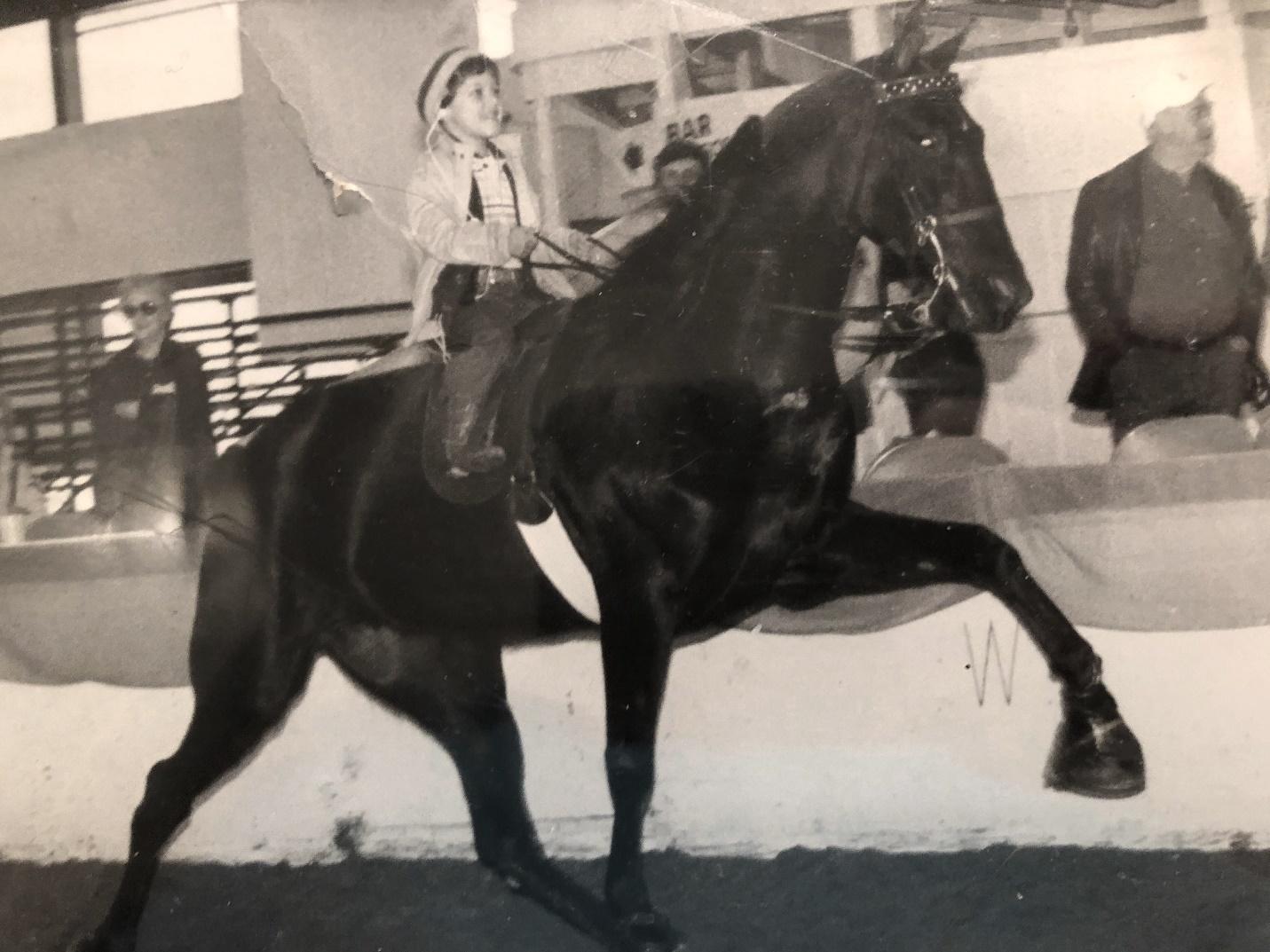 Marty Irby rides ‘Carbon Princess,’ a ‘big lick’ walking horse in an early morning workout at the Walking Horse Trainers’ Show in Atlanta Georgia in March of 1984. Photo from the Irby Family Archives.

Back then Monty and I met some serious resistance from the walking horse trainers who wondered what the magic was that Monty Roberts brought to share – the use of nonviolent training and natural horsemanship principles. And after years of trying to effectuate change in the breed, and promote Monty’s principles, I finally spoke out and publicly endorsed federal legislation to end soring in 2013 – an amendment to the Horse Protection Act (HPA) of 1970, the Prevent All Soring Tactics (PAST) Act. That bill was written to eliminate the use of large, stacked shoes and ankle chains that exacerbate the pain of sored horses, increase the penalties for those caught soring to felony level enforcement, and wipe out the industry’s failed self-policing program the USDA’s own Office of Inspector General in 2010 deemed corrupt and ineffective. 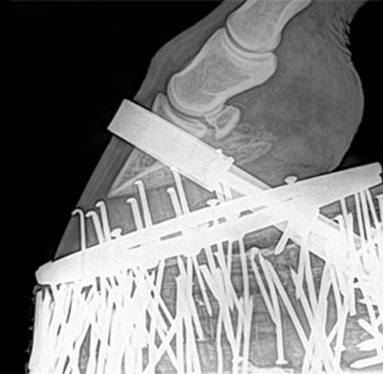 X-Ray of a “Big Lick” Stacked Shoe Currently Legal in the United States | Photo courtesy of the U.S. Dept. of Agriculture.

We spent the next six years working to get the bill passed in the U.S. House of Representatives, and only achieved that goal in 2019 as result of changing the bill’s name to the U.S. Senator Joseph D. Tydings Memorial PAST Act to honor another friend – the late Joe Tydings, a Democrat for Maryland who authored the HPA in 1970 and passed away in 2018. The measure cleared the U.S. House by a vote of 333 to 96, but with opposition from Senators who hailed from Tennessee and Kentucky, the bill was dead on arrival in the Upper Chamber, something we’d long expected. With that in mind, in 2020 we pulled together representatives still involved in the breed to form a compromise bill that the Senate would pass. In working with colleagues at AWA and with leaders of the Walking Horse industry, I was mindful that Monty often says, “the most important word in the English language is compromise.”

And after 18 grueling months and hundreds of hours on the phone with the industry insiders, we issued a draft of the compromise bill to the Senators and several equine and animal protection groups. The revised PAST Act still banned the chains, but allowed for a much smaller and removable shoe (about sixty percent less in size than those used today), and it still increased the penalties, eliminated the self-policing scheme, and even went further than the original PAST Act to ban the use of treacherous devices known as tail braces that hold the horses tail in a U-shaped position after the ligaments in the tail have been severed – all for a certain look.

We garnered support for revisions to the PAST Act from Monty; Mark Miller – the lead singer of the band Sawyer Brown who used to own walking horses; the Citizens’ Campaign Against Big Lick Animal Cruelty; the family of Joe Tydings;’ SPCA International; NYCLASS; and many other horse and animal related groups. We were building steam until we saw opposition from some animal groups which, despite no reasonable pathway for enactment of the legislation in the Senate, opposed the compromise and clung to the original bill.

That bill would have taken effect in November to ban ankle chains and tail braces and dramatically reduce the size the shoes but for the obstructionism of a few. While the sabotaging of a worthy compromise is regrettable, there may be another shot at it. Sens. Mike Crapo, R-Idaho, and Mark Warner, D-Virginia, have this week, reintroduced the original PAST Act, and it’s our hope that they recognize that there is a pathway to get something meaningful done by making some compromises to the measure. AWA supported the original PAST Act for years, but it faced insurmountable opposition from key lawmakers. 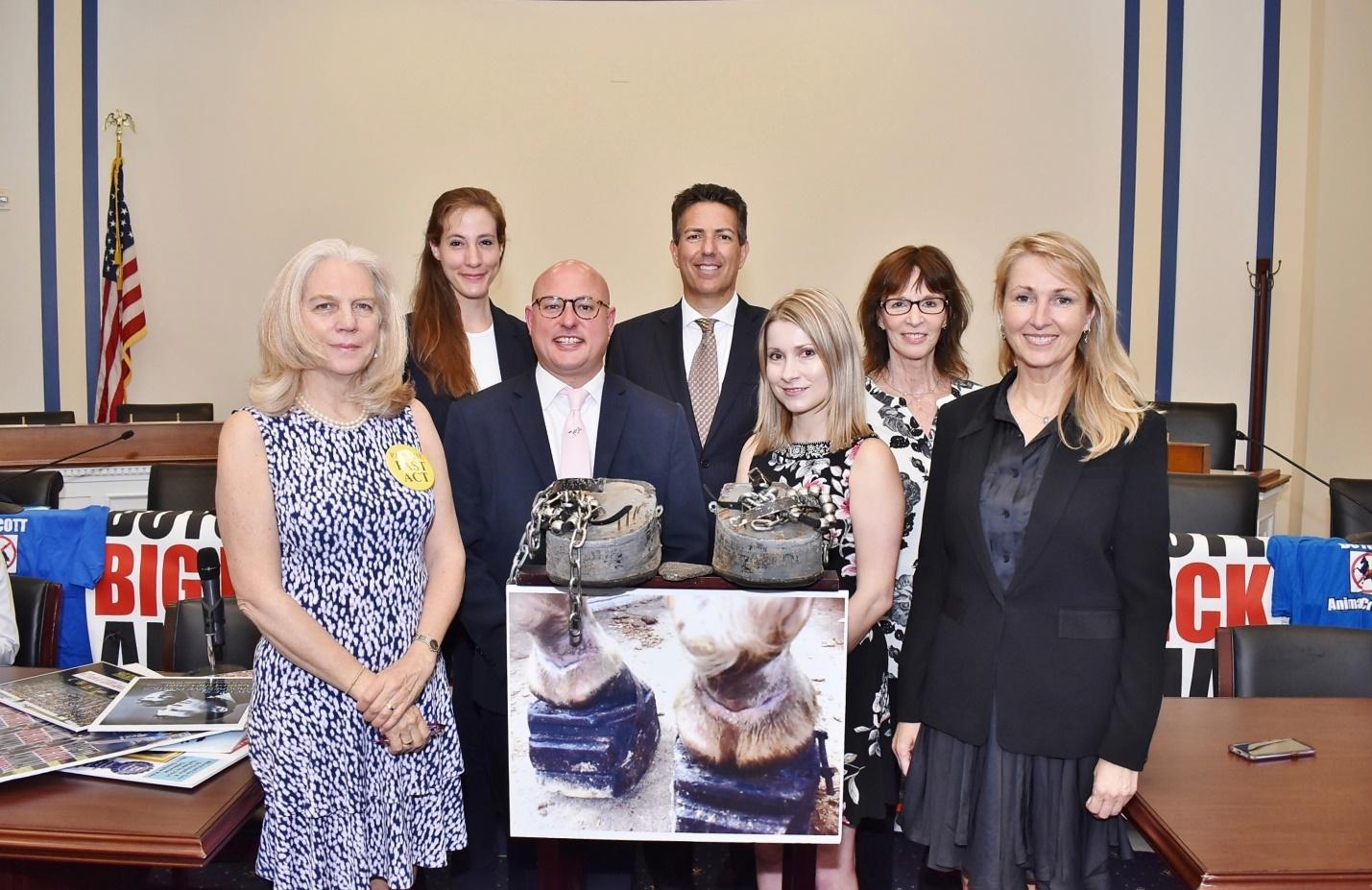 Left to right: Penny Eastman, Meredith Hou, Marty Irby, Wayne Pacelle, Holly Gann, Gina Garey, and Jennifer Skiff at a press conference on Capitol Hill on July 24, 2019 just prior to passage of the Tydings’ PAST Act in the U.S. House. Photo courtesy of Animal Wellness Action.

Just continuing to reintroduce the same measure in the Senate when it cannot move in that chamber does no service to the horses. Soring must stop, and there must be real penalties attached to the crimes, not the 1970 misdemeanor penalties that no U.S. Attorney will actively enforce. And on every bill in every subject area I’ve worked to get signed into law, I’ve yet to see legislation enacted in its original form. That’s the way the founders of the country designed the system to work.

Rather than bank on a failed USDA regulation the groups that opposed the compromise are pushing that faces a very long pathway, a certain legal challenge, and a potential reversal in a new Administration, Congress can and should act and deliver comprehensive reform.

Sign the petition by clicking here to urge action on practical reform for horses. Just banging your head against the wall does nothing to stop horse soring. We need meaningful, durable, enforceable reforms for the horses we all care so deeply about.