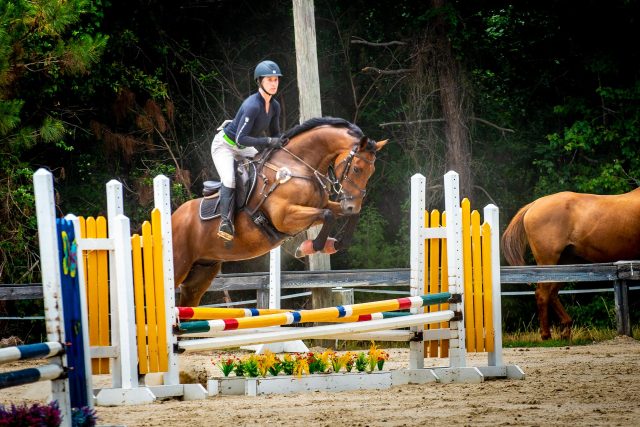 “All of it was an exhausting, collective lesson in learning to stop hammering square pegs into round holes — for horses, humans, life… everything. And all of that hard ‘good’ pushed me to be better horseman, maybe a better human too.”

Following the announcement that the Retired Racehorse Project‘s 2020 Thoroughbred Makeover and National Symposium, presented by Thoroughbred Charities of America, will be postponed to 2021, competitors have been working to decide what comes next for them and their mounts. Today, blogger Aubrey Graham talks about finding the good in the tough.

The last few months have been… a lot. Flat out hard. Enormously rewarding. In the end, a collective relief. I guess that’s one of the funny things about life (and horses) – there end up being quite a few ways to experience it. Often, apparently, everything comes all at once.

Remember all the red light, green light ridiculousness from a few months ago? Juice (JC Pulpituity, RRP Makeover Grad 2019) couldn’t stay sound, Boomer (JC Vanderboom Ridge, RRP 2020 MegaMakeover Hopeful),was in limbo, my relationship was falling apart and Forrest (JC Don’t Noc It, RRP Makeover Grad 2018) wasn’t holding up as my primary eventing partner. Well, somehow, in slogging through all the ‘not easy’ that came with all of that, I think that maybe, just maybe, I have finally managed to turn those situations into green lights (or at least that’s what I’m telling myself, dammit). 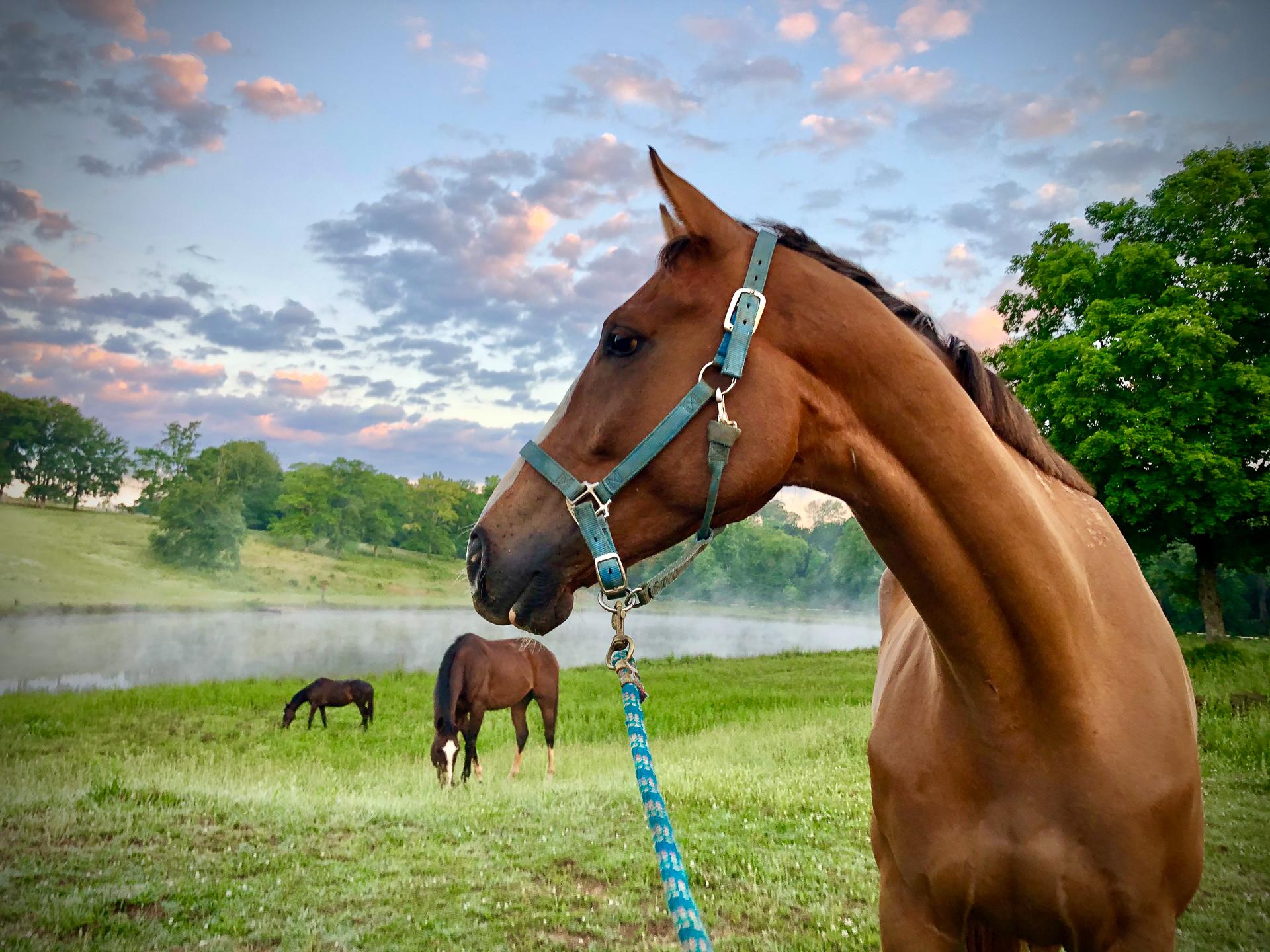 Juice surveys his field on one of his last mornings at my farm. Photo by Aubrey Graham.

Much to everyone’s surprise, Forrest is now one of my primary lesson horses and rocking it. This giant red dragon calmly packs green riders around, though definitely making a point of “if you can’t steer with your legs, good luck” as he veers towards the center. Juice successfully traveled home to his breeder to retire (there’s a whole emotionally involved three part thing about that here, here, and here. Check it out). And Greg and I have found a way to stay legitimately good friends (and he’ll probably read this before it goes to print). I’m OK with taking my time with Boomer, and his cousin, Rhodie (JC Western Ridge, RRP 2021 MegaMakeover Hopeful), is making waves as my new front burner horse. 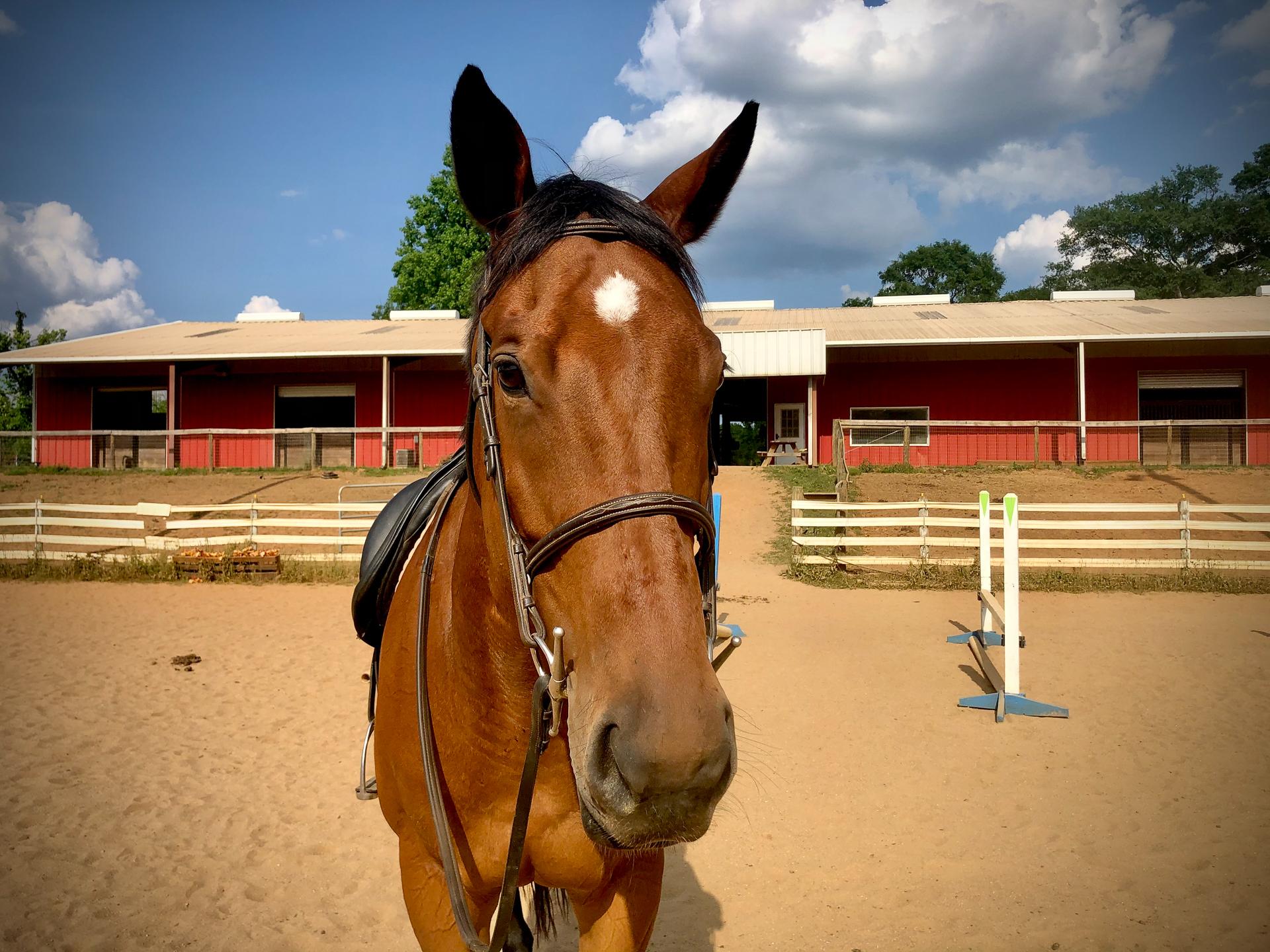 Boomer has been on a slow and steady path to getting quieter in the bridle and just generally being a good kid. Photo by Aubrey Graham

Writing all of that as a list sounds trite – all of it was (and is) important, and not an ounce of it was simple.

Hell, even the good stuff hasn’t come easy. Rhodie, who makes an amazing bascule over fences and has the most upper-level potential of any horse that I have owned, is also the horse who will ensure that I become a better rider every time I get on him… or else. 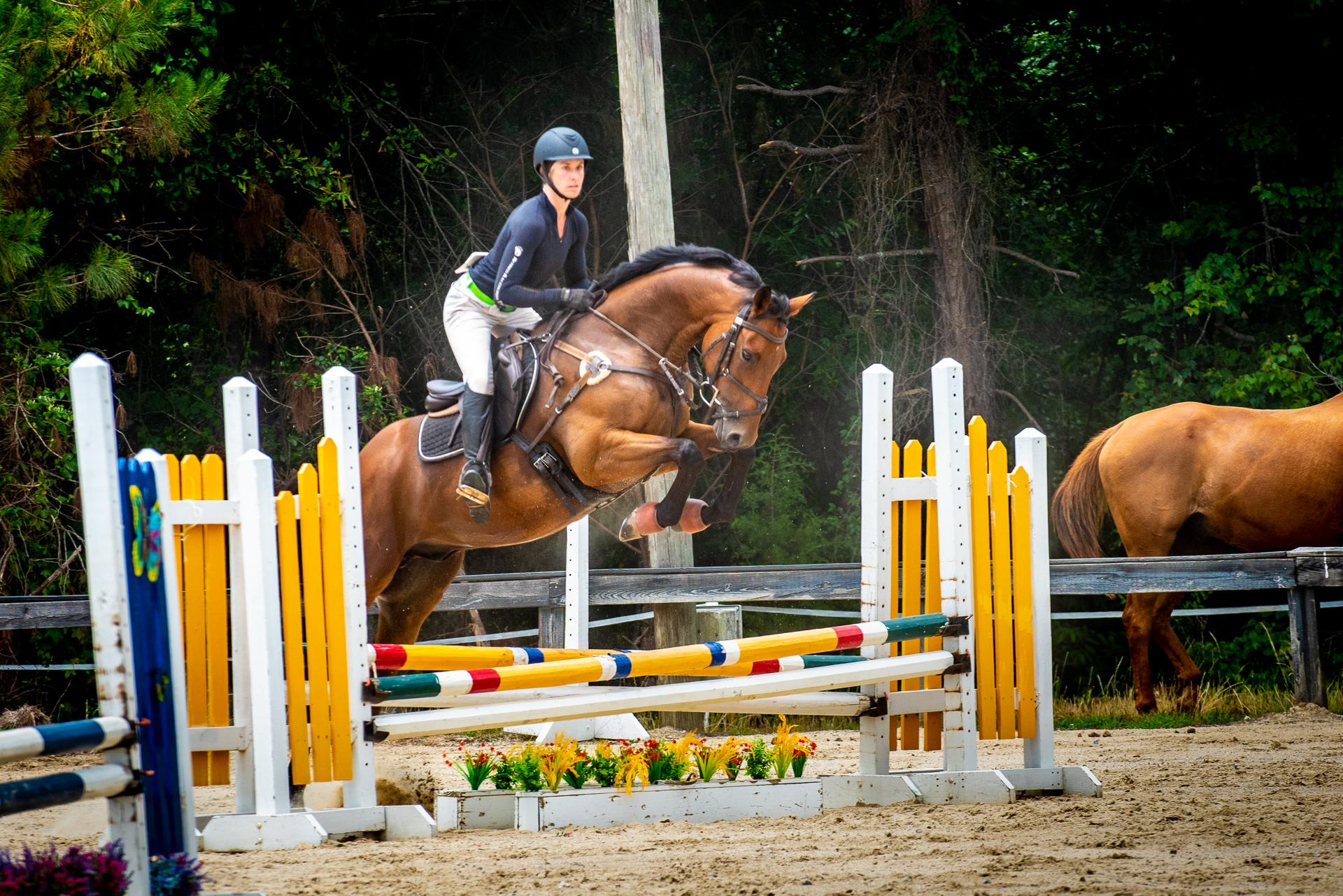 Rhodie showing off his bascule at a recent Big Cheese Eventing Jumper Show at Ashland Farms. Photo by Audrey Mecklenburg.

A month ago, he decided to make the “circle of death” (very low fences set on a 20-meter circle where you adjust to make even 4 strides, 5 strides and 6 strides each turn) pretty close to a literal experience. After very successful attempts to the left, he pitched a fit to the right, shut down, tried to buck me off, ran me into the arena rail (through jump standards) and tried to climb out of the arena. Once I dismounted, de-escalated the situation and got back on, he summarily ran me sideways through two full sets of jump standards, only to impale himself in his upper thigh and bang up his front left on the last one. Game over. The smart, self-destructive pony won.

Waiting for the vet while he bled (thankfully it was only a flesh wound and did not need stitches), I had to think through the situation. This was objectively bad – but there had to be something more to it. I’m not a person who subscribes to “everything happens for a reason,” but I’m definitely all in on mining the valuable nuggets out of the sh*t sandwich we’re sometimes served. There had to be something important here, the horse was, after all, communicating “no” very clearly. 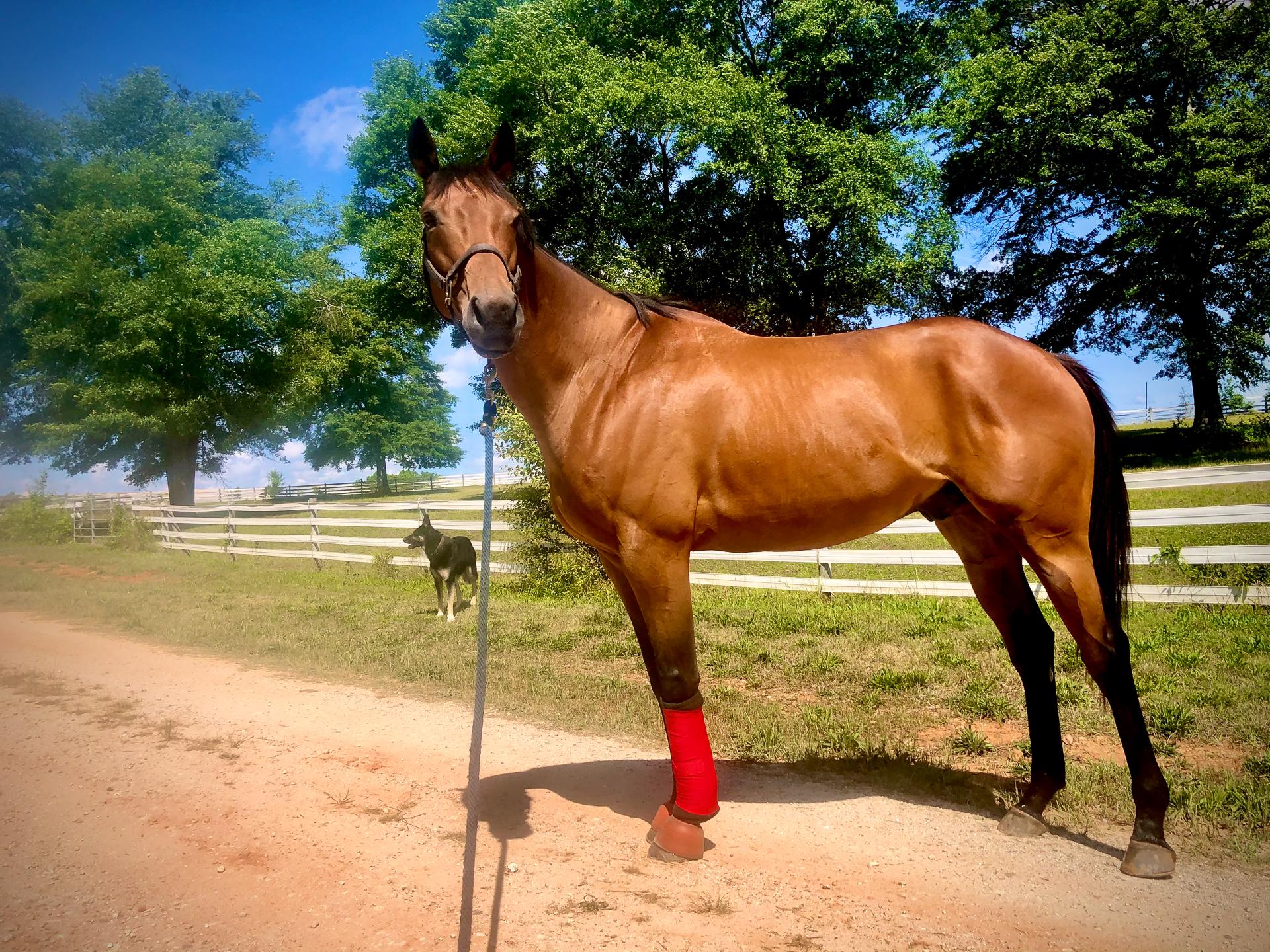 Rhodie showing off his wrap and “damned if I care” attitude. Photo by Aubrey Graham

Quite a while ago, I told Greg that at some point Jocko was going to show up in one of these blogs. Well, this is that blog. At the time I mentioned that we were spending a LOT of time analyzing the commonalities between his thing — Brazilian Jiujitsu (BJJ) — and my thing — horse training/coaching. As high-contact, high intensity sports where you have to think multiple moves ahead with a partner/adversary, there’s actually a surprising amount in common. The psychology behind the two is similar too. Enter Jocko.

Jocko Willink (BJJ black belt, Navy SEAL officer and podcast host) is all about leadership, discipline and the like. Frankly, he’s pretty freakin’ intense and not everyone’s cup of tea. No, Jocko, not everyone wants to be “up before the enemy” at 4:34 in the morning. But there are tidbits of awesome in what he espouses. Well, perhaps I just think they’re awesome because they’re things that I think/use already. Yay! Validation from a man that is likely madder than I.

Jocko has this concept of “Good” (check it out here). The idea is that no matter what challenge you encounter, he is going to say, “Good.” Then, whether speaking as a martial arts practitioner or military leader, he finds a way to make that hardship productive.

Well that was a workout. Good? Good. Photo by Aubrey Graham.

We in the horse world do this all the time (because hell, if we didn’t most of us would quit or wallow in impressive levels of depression). For instance, this week: Shavings delivery person dropped the entire dump truck load outside of the shavings shed before a storm? Good. I needed that cardio and core work out. Ring too sloppy to jump? Good. Go get a fitness day working hills in the field. Horse lost a shoe (again)? Good. Time off and time to address the weak hoof and turnout mismatch. Got kicked? Good. Now you’ll remember to take these enormous metal-shod animals more seriously. I could go on and on here – but the concept of finding opportunity in hardship is pretty simple.

With Rhodie and his mega-meltdown, the “Good.” is that I had to figure him out: ride smarter, not harder. On the phone with my coach that night we agreed that this was not a one-off (you definitely know it’s a crappy situation when your coach calls you at nearly 9PM to discuss the event). “You’re going to have to find ‘the key’ to unlock him,” Werner said, “and you’re going to have to be smarter than he is.” Rhodie is a wickedly bright kid, so that’s a bit of a steep order. But fine, PhD be damned, I have to figure out how to be smarter than a 1200lb herbivore or I’ll never get him to the Retired Racehorse Project’s Mega-Makeover in October, let alone the upper levels. 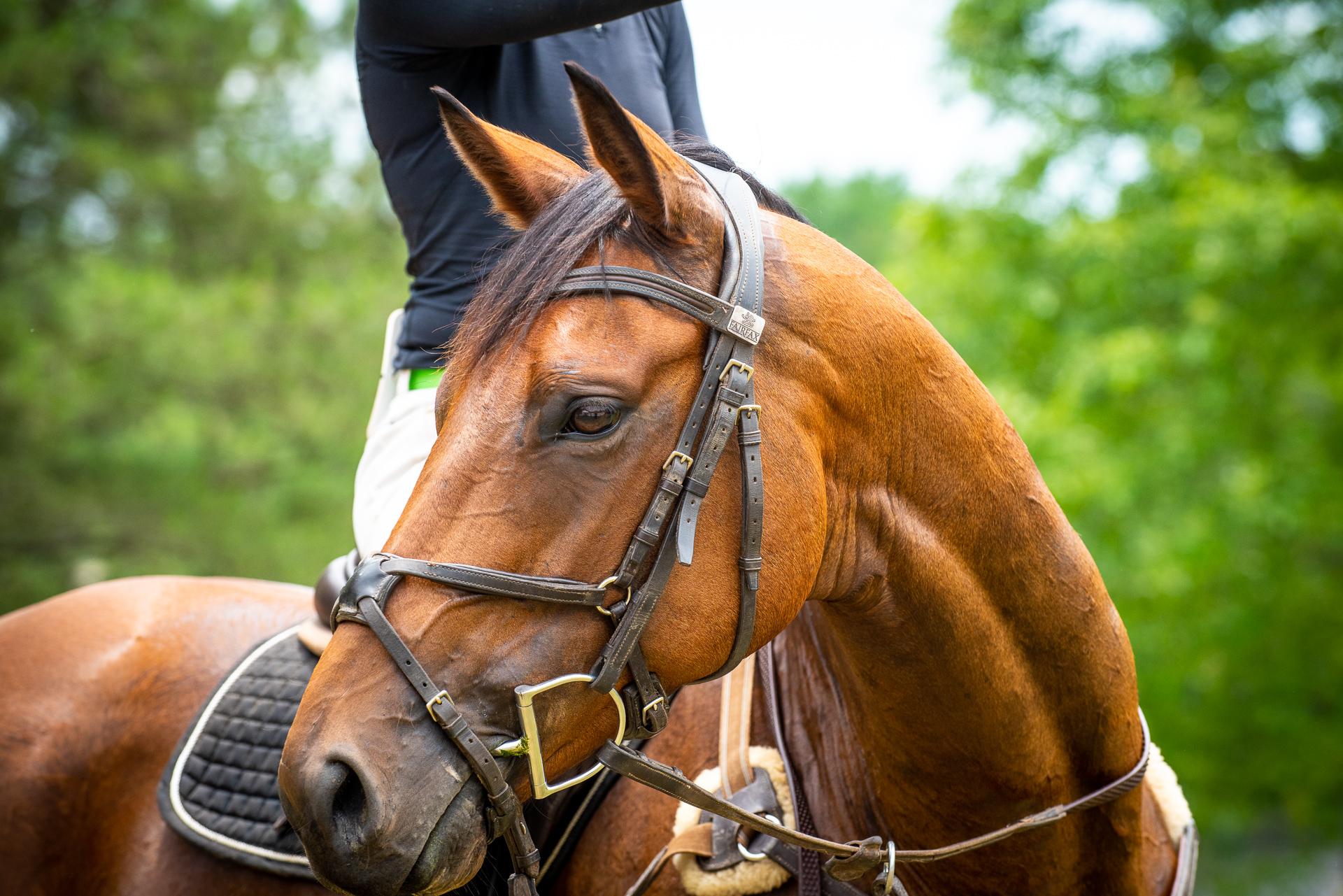 Gotta be smarter than this pony… crap. Photo by Audrey Mecklenburg

As he healed, I went to town with groundwork: flexing his neck, side passing, giving his forehand and hind-end, suppling, lowering his head. When I brought him back to work, I translated the exercises from the ground to the saddle. Was it seamless? Nope. But now he neck reins. I can shut down a breakdown with the sidepass “buttons,” and you know what? The horse is steadier in the bridle, more responsive, happier and showing even more promise. Hell yeah. Oh, and yep, while he is becoming a better horse, he is making me a better rider. 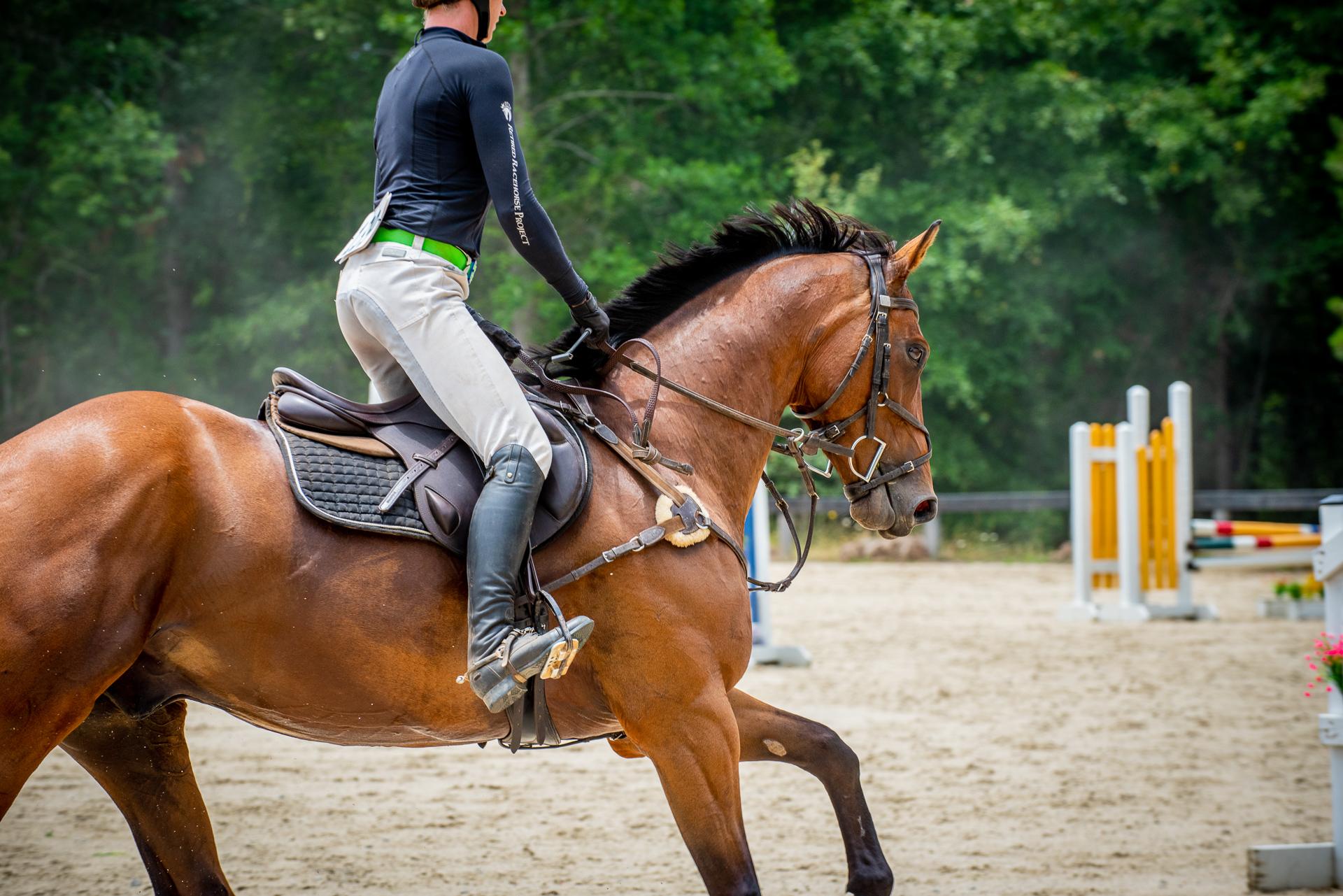 Rhodie staying steady and NOT melting down at the recent BCE show. Photo by Audrey Mecklenburg

As a fun aside, Rhodie and I get to test this control as we compete in the Real Rider Cup, cantering around a standardized 2’6” course in the virtual competition that benefits Thoroughbred second careers. The video will come out this week and all of the competitor’s info and media should be visible on their site at www.theRealRiderCup.com 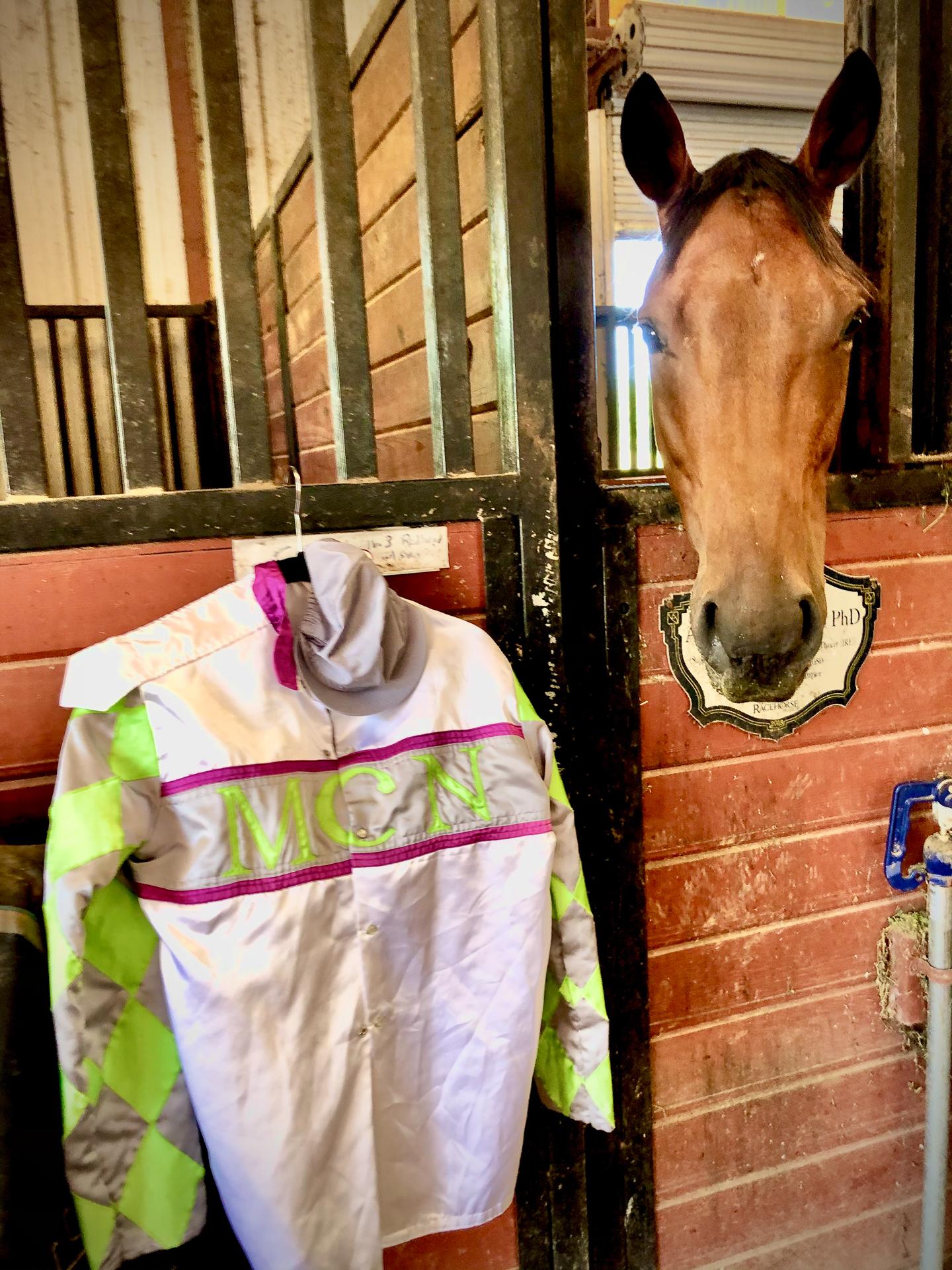 Rhodie and I will ride in MCN Stables silks for the Real Rider Cup this week. Photo by Aubrey Graham

Finding the productive way forward through Rhodie’s meltdown was challenging, sure. But because of that rough patch, a little listening and a little training smarter, things are indeed “good.” Hell, because of this, the kid has a square halt to die for. But addressing that “good” isn’t always as straightforward. With Juice, Forrest, Boomer and Greg, it has been a completely different psychological game.

I’d go so far as to say that I’m pretty talented at stuff that demands that I be flexible, work harder, do more, get smarter. Conversely, I’m absolutely flat out awful at giving up. The past months were tough because the “good” was all about learning to let go. Horse can’t do the upper levels? Good. This gives you a chance to find him a job that makes more sense and look for a more appropriately talented beast to fill his shoes. Horse can’t stay sound? Good. Time to learn how to let them retire appropriately instead of hanging on for love alone. Horse needs more time to settle and can’t progress on your schedule? Good. Learn to soften the timeline and maybe give up on show goals etc. 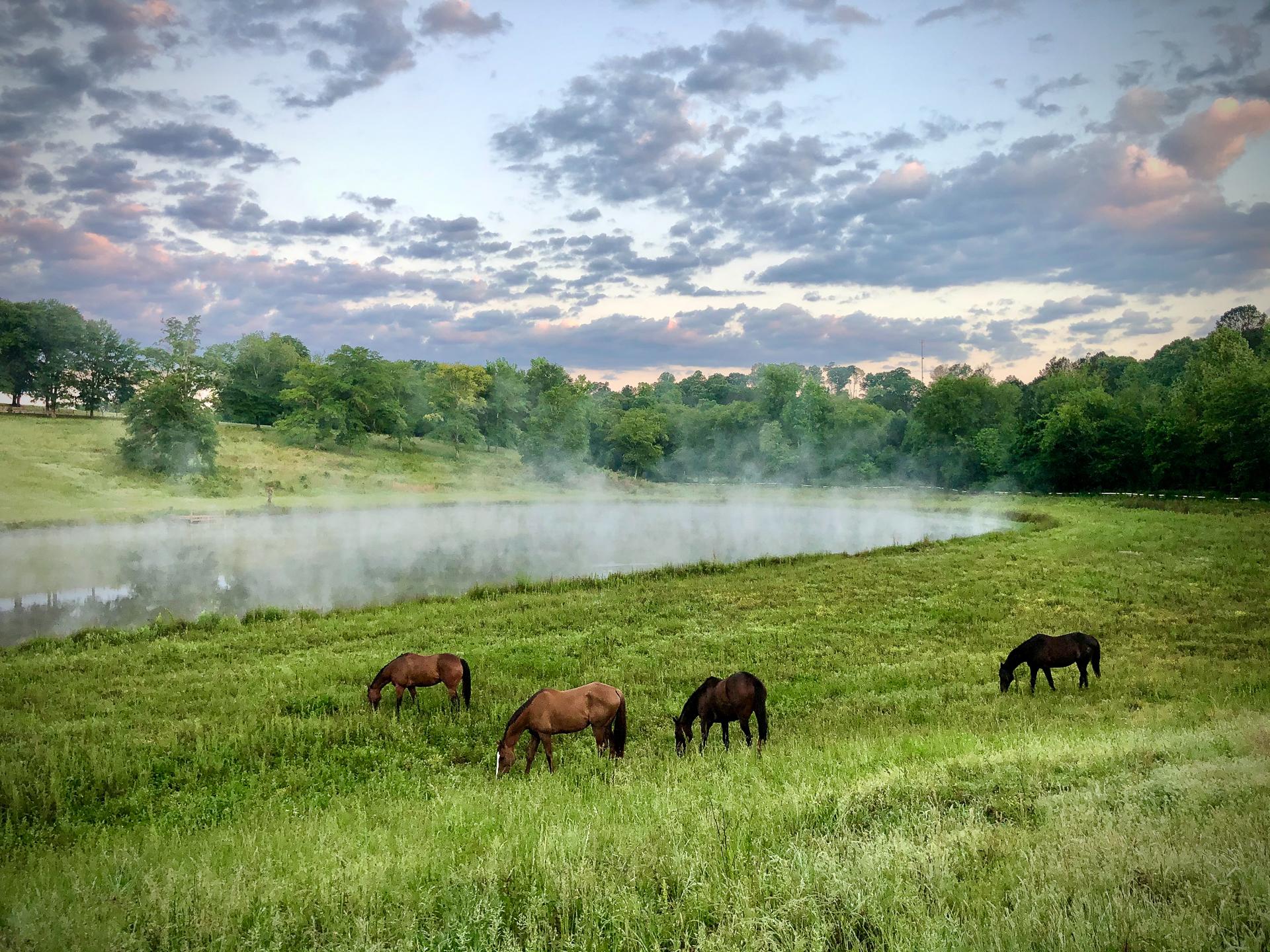 Sometimes, apparently, you have to learn to let go. Dammit. Photo by Aubrey Graham.

All of it was an exhausting, collective lesson in learning to stop hammering square pegs into round holes — for horses, humans, life… everything. And all of that hard “good” pushed me to be better horseman, maybe a better human too.

In May, I finally made the decisions that I had needed to for a while. Instead of changing tack, trying again differently, racking up more vet bills or kicking any balls I could find into motion (again), I set them down and walked away. The relief that followed the pain was engulfing. Reifying. Renewing.

And that too, is indeed “Good.” 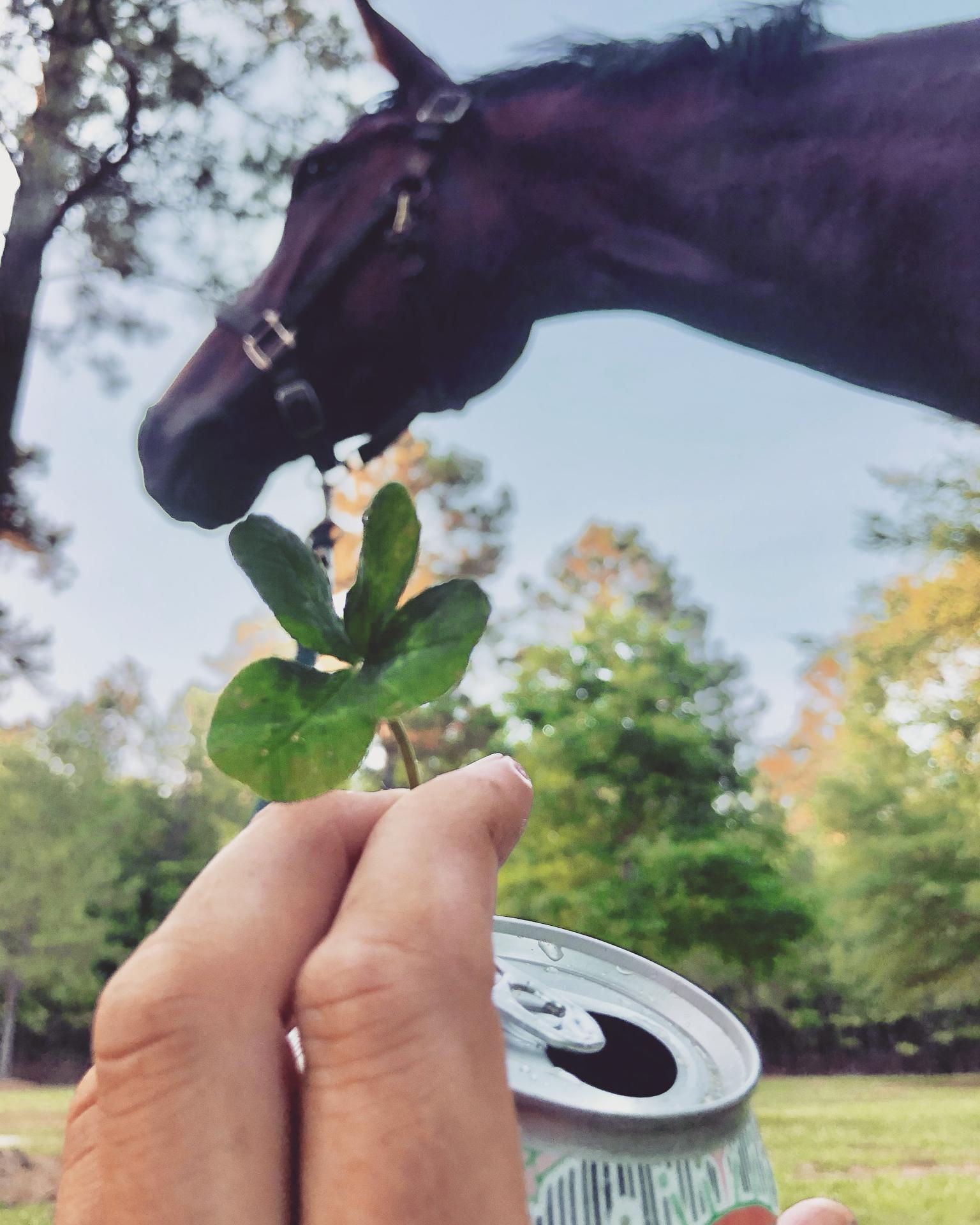 Kick on. Photo by Aubrey Graham