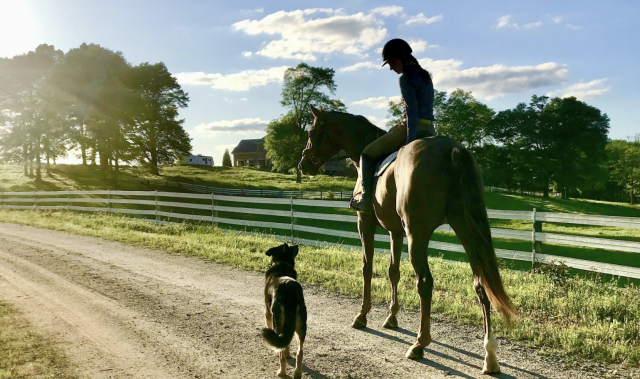 May 27, 2021DeAnn SloanAubrey Graham#ESSAY, #seriesComments Off on Of Love and the Pursuit of Soundness: A Story of (and for) Juice, Part III

“‘Maybe one thing you should take a look at, kid, is why you always insist on backing the losing horses.’… Maybe I’m just stubborn.” Aubrey Graham wraps up the final part of this series by letting us know what the future holds in store for Juice.

If you missed parts one and two of this series, you can catch up here and here. 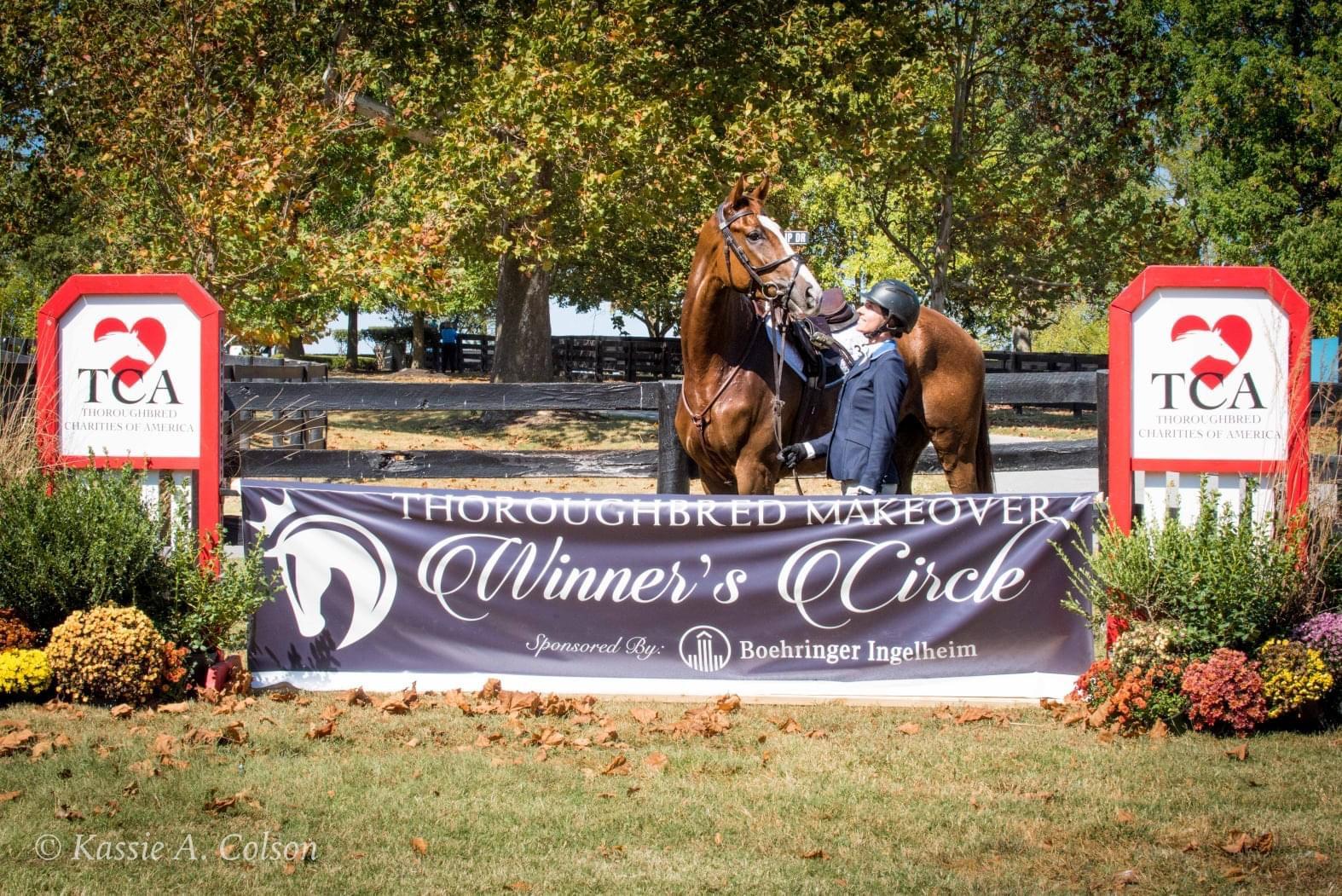 Before the stall door locked him in, and after his respectable top 20 finishes at the Retired Racehorse Makeover (in October 2019, in Eventing and Show Jumping), Juice’s lofty jump had lost its push. Sure, he could get over a 3’ fence without too much try – he was huge (nearly 17.2 by that point). But there was no spring. I caved to my gut and did what I should have done a year earlier during his PPE – I finally ultrasounded that ankle.

Sweaters infested with a year’s worth of closet moths looked better than his hind left medial suspensory branch. “That’s not good,” I said with very wide eyes. “No,” my vet added. “No, it’s not.” A poorly healed track injury brought scar tissue, brought a large arc of mineralization within the insertion and eventually brought an acute injury on top of it. 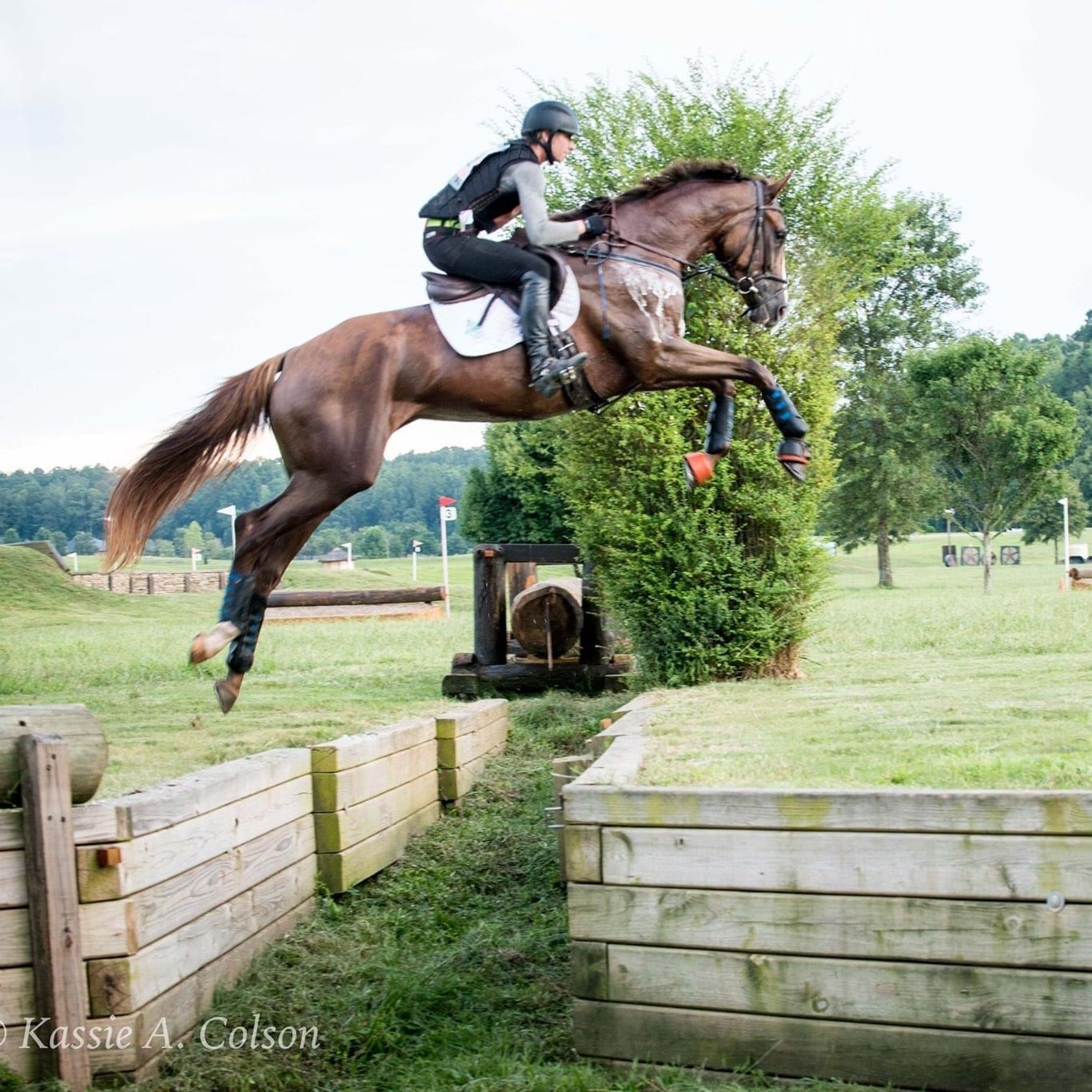 Juice was good at inspiring leaps of faith. He was also, at one point, quite good at them. Photo of the Novice ditch at Chatt Hills, Fairburn, GA August 2019. Photo by Kassie Colson.

But because I don’t like to give up, even when the writing is on the wall in stupid-colored neon lights, I threw everything at the injury. Everything. Stem cell treatments, shock wave, credit cards, my sanity, his sanity, long hand walks where the risk of human injury got higher each month he was in his stall until he couldn’t exit anymore without ace. There was always just enough hope to go one more day, one more week, one more month. Whatever he needed. Everything.

“Maybe one thing you should take a look at, kid, is why you always insist on backing the losing horses.” That’s my friend, Ian. He’s only sometimes referring to actual horses, but I have never had a good response for him either way. Maybe I’m just stubborn. Maybe giving up early and not knowing is always worse than exhausting every possibility to make it work… 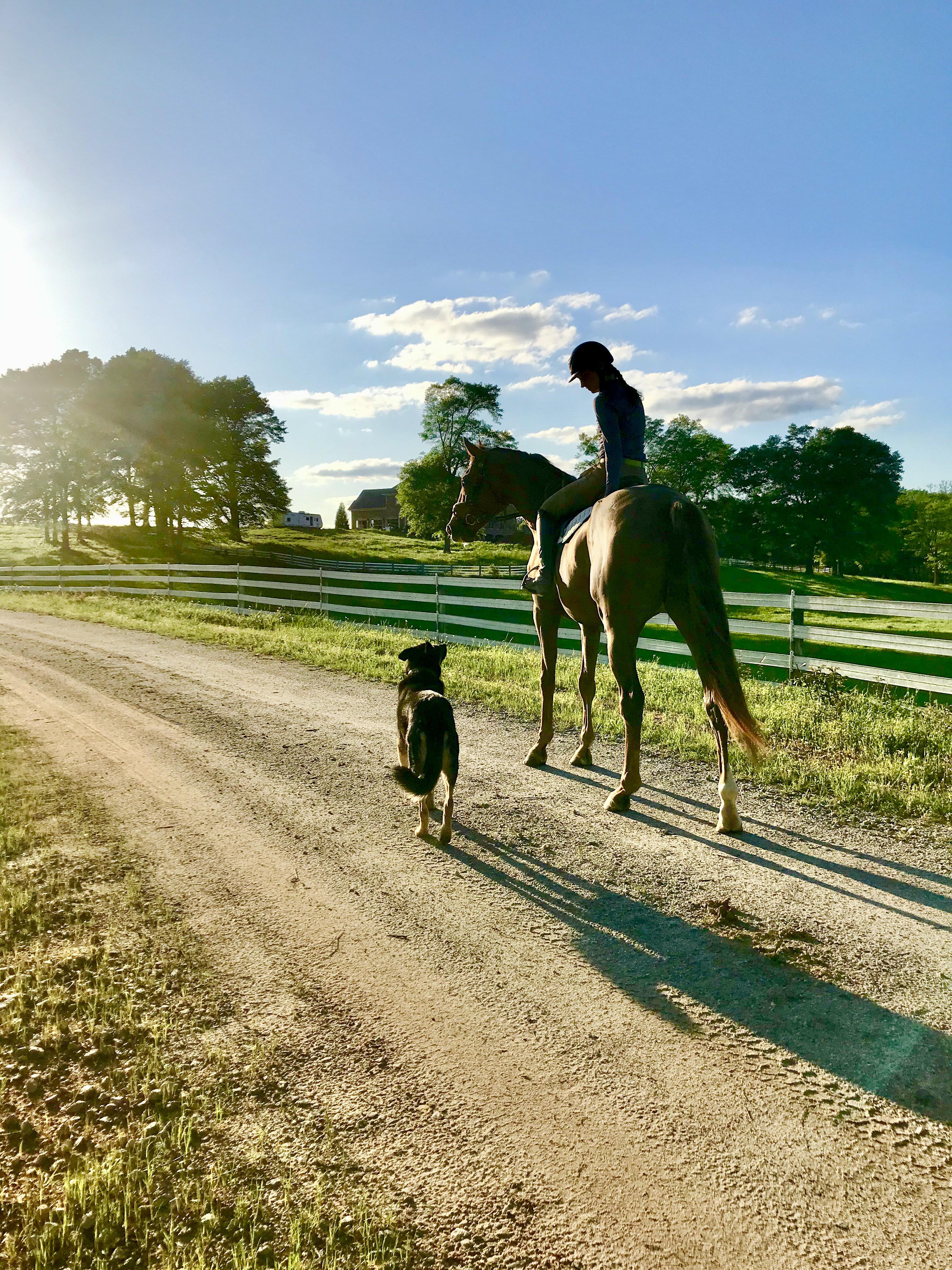 Juice’s first ride in an effort to slowly bring him out of stall rest in the Summer of 2020. He kept the areal feats to a minimum — for that ride, at least. Photo by Greg Lyon.

God, that was a long time ago. 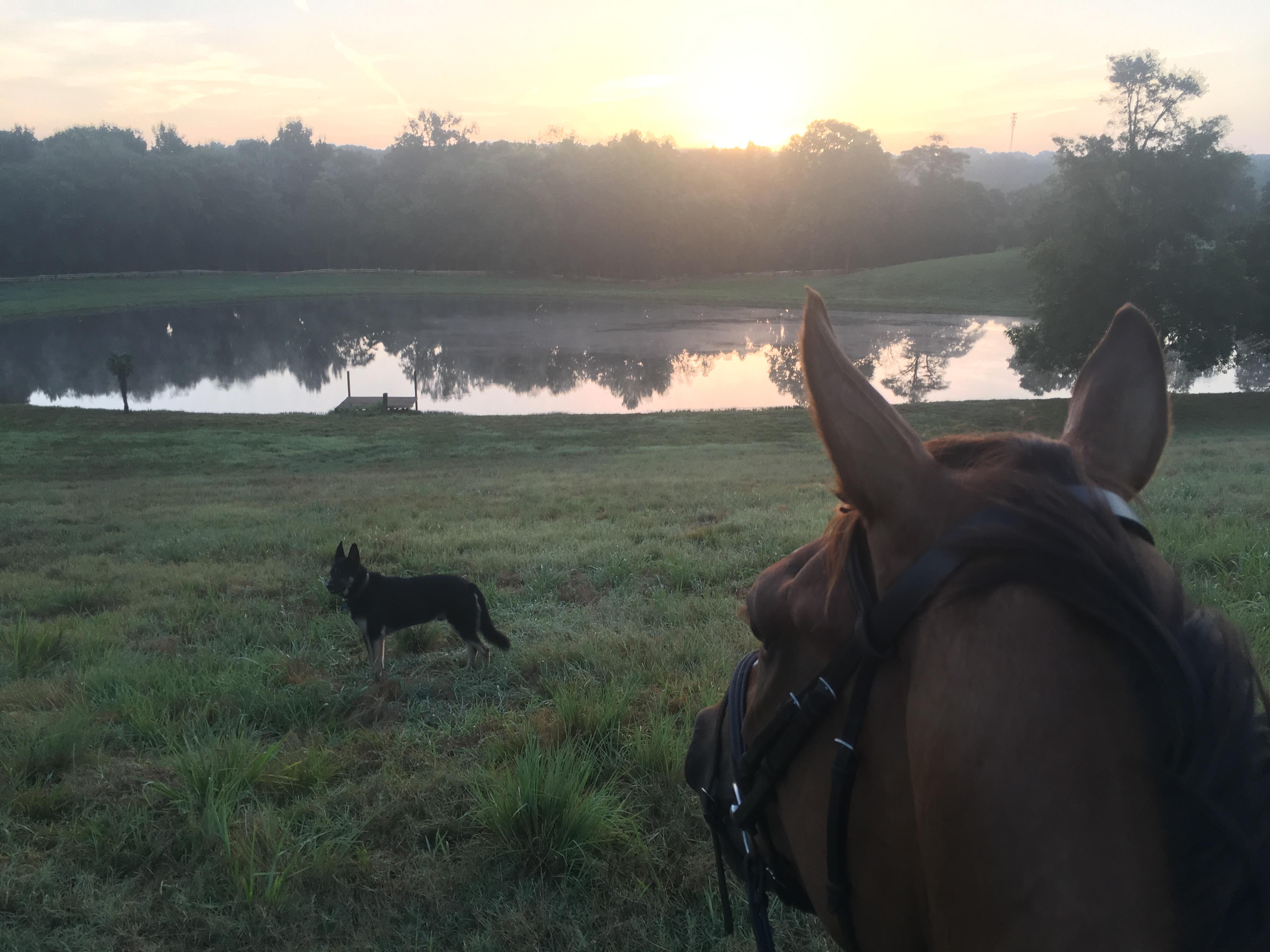 Juice hacking out at dawn at Kivu. Photo by Aubrey Graham.

Trying to put him back together failed. The ultrasounds got better, but Juice’s hind legs got straighter as his muscles compensated for the ligament’s pain and weakness. With no upper-level career possible and a mid-level one unlikely, we went back to the shallow-end and gave it another, different shot. I leased Juice to one of my students. I love(d) that red idiot who, during stall rest, had learned to take your hat from your head – his stumpy teeth coming right at your eyes, but only gently lifting your cap off your skull by the brim. I didn’t want to let him leave my barn… so I let Erin love Juice too. And she did. 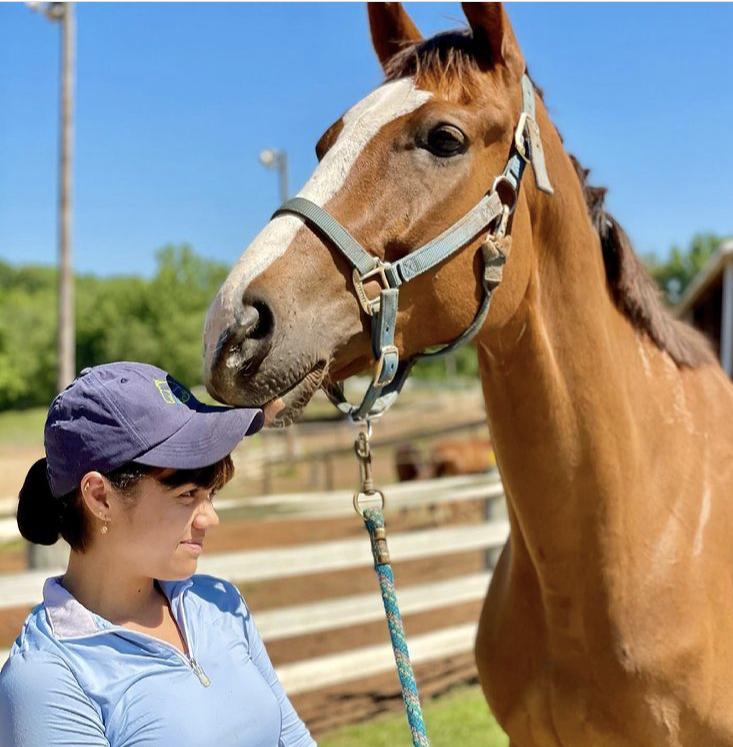 We knew that he would either get better or get worse. And for a while it was OK.

Erin took him cross country schooling and Juice shocked her by jumping the Amoeba fences at the same height he had left off at – Prelim. His enthusiasm was infectious – at least to me. I couldn’t help but laugh with his joy, while Erin probably ran through ways to both get out of the rest of the ride and potentially murder me. But she sat up, rode better and better, and by the end of the clinic, had earned the good jumps and quiet approaches. She did better than well. He loved his job that day, and I did not get murdered. 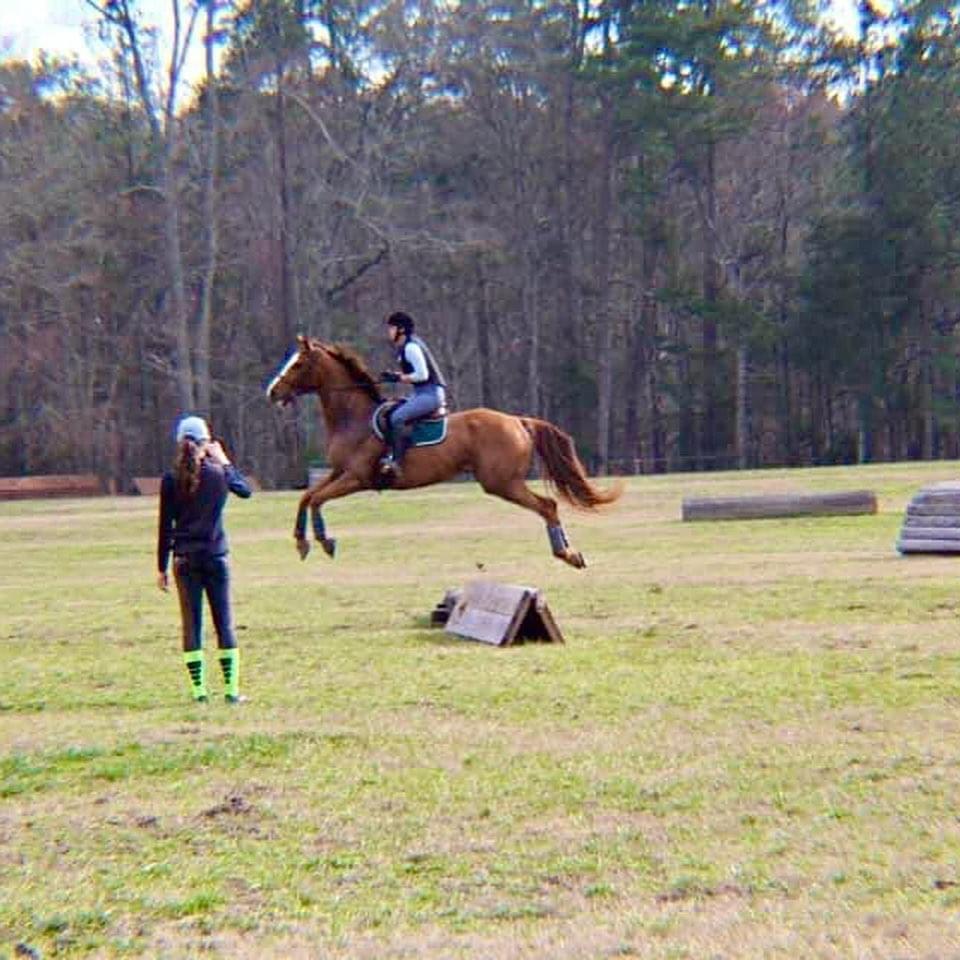 Juice decides to transform the Amoeba XC fence into a Prelim one with Erin Oquindo in the irons. Photo by Katie Stewart.

But two or three months into the lease, it was clear that “better” wasn’t staying the cards. Joint injections joined the parade of wasted vet bills. I apparently couldn’t walk away without exhausting everything. Everything. I suppose that’s a trend… 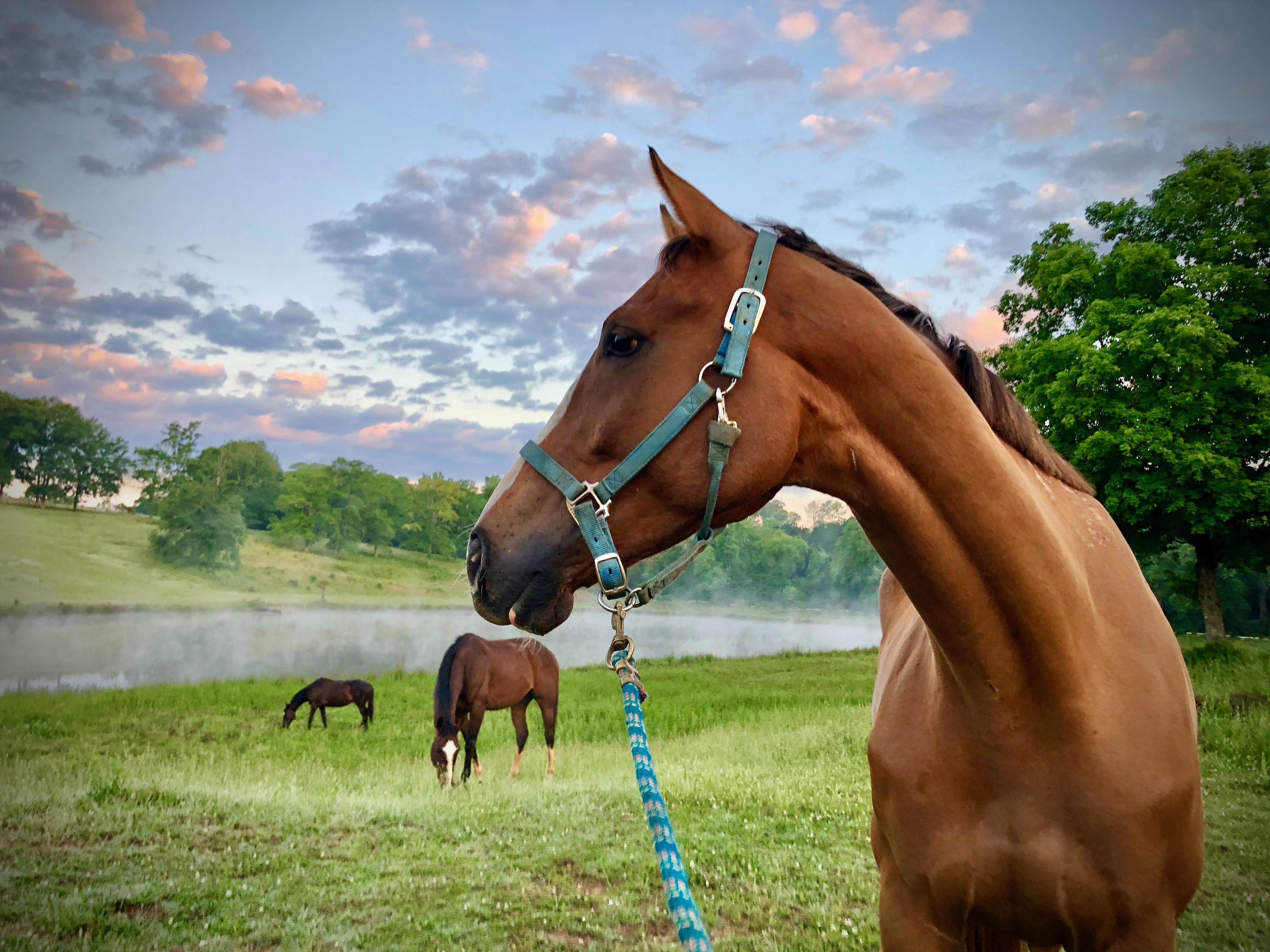 Juice out with his friends at Kivu on Saturday before he hauled home on Sunday. Photo by Aubrey Graham.

And so, this past month, I got to practice the meditative practice of giving up. Of allowing it all to shatter and not trying to glue it, duct tape it, lash it together with hay string or use another new experimental adhesive in order to give it just one more go again. It doesn’t work. He’s simply not sound. His role here in a performance horse barn with no real retirement options no longer makes sense. I could keep him just to keep on keeping. But sometimes, a radical shift in approach is what is needed. And I needed to give up, for him and for me. And I can tell you this:

I fucking hate that.

Sunday morning a week ago, I drove home to my farm, wheels rolling into a familiar sunrise made unfamiliar by the weight of leaving — of changing course with the man I had loved for nearly two years. Of giving up the fight to make Juice sound. It was a lot. Hell, it is a lot.

At 8:00 AM, I walked Juice into a box stall bound for Virginia. At 8:05, I stood in my driveway watching the rig’s taillights travel towards the road. As the trailer passed through my gate at 8:07, I finally had to let him go. I had to collect the pieces, knowing fair well that I’d never quite get them glued back together in the same order.

I have always wondered how much leaving the heart can take. And I’m always surprised that as a response it just keeps on beating. 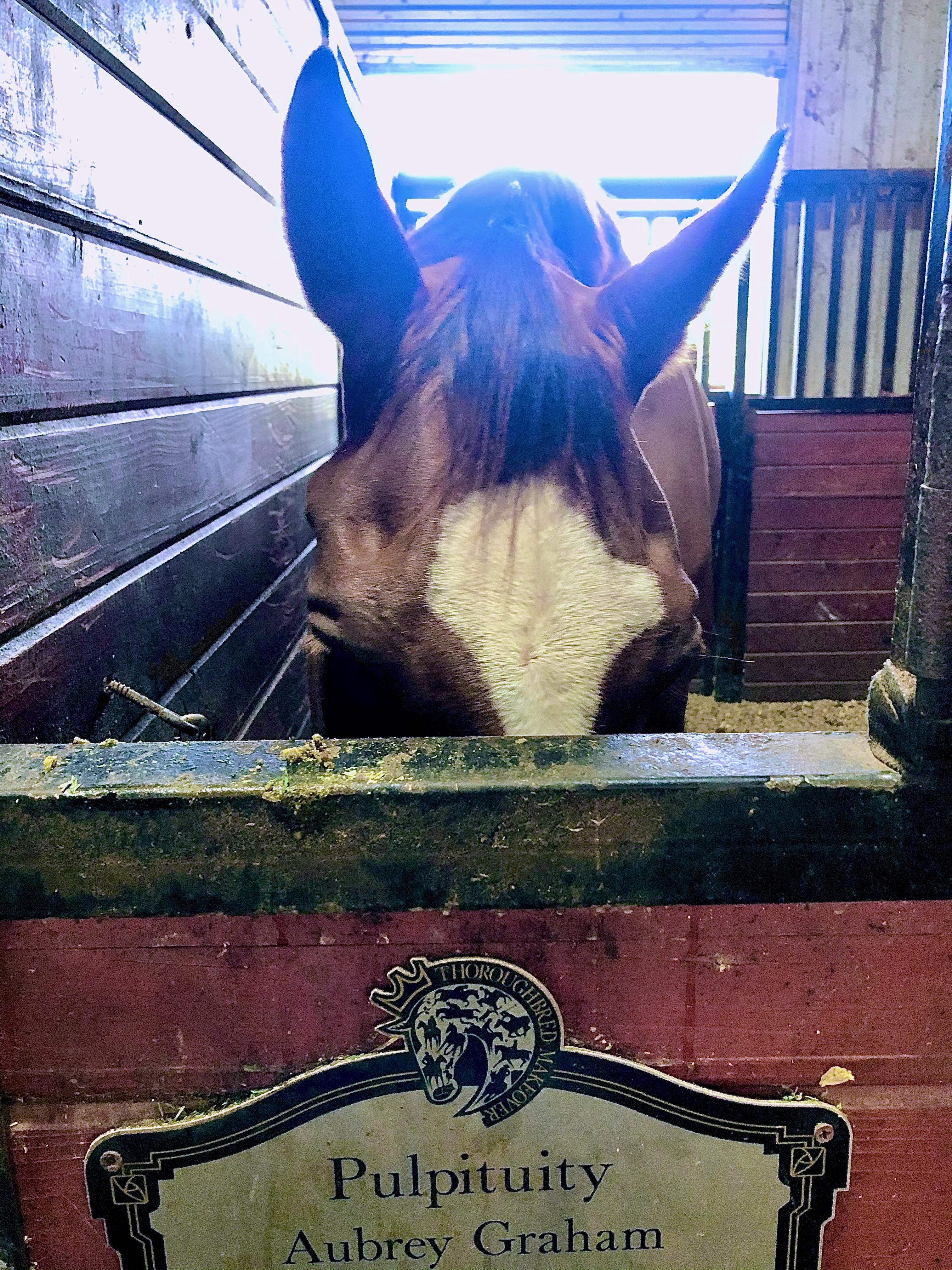 Juice got one last meal at home before loading up. I still have to get my heart together enough to take that plate down. Photo by Aubrey Graham.

But I’m lucky. There’s still a future here. It’s just a different one than I had envisioned. It’s not a dead end. And it’s not a backhoe or a “never see you again.” Giving him back is just a road I was too stubborn to ever willingly imagine that I’d choose to walk down.

“I’m sorry,” I texted Cathy Gulick Sanders, at the end of a slew of long messages detailing his quirky personality, what he eats and profuse words of thanks, “You must think I’m a total sop. I’m an equine professional for God’s sake” But she didn’t. Cathy bred Juice’s Dam, Roca del Norte to Corinthian, but sold the mare two weeks before she foaled. She understood. “I always wanted him back. I just wish it didn’t have to happen like this. I’m so sorry.” 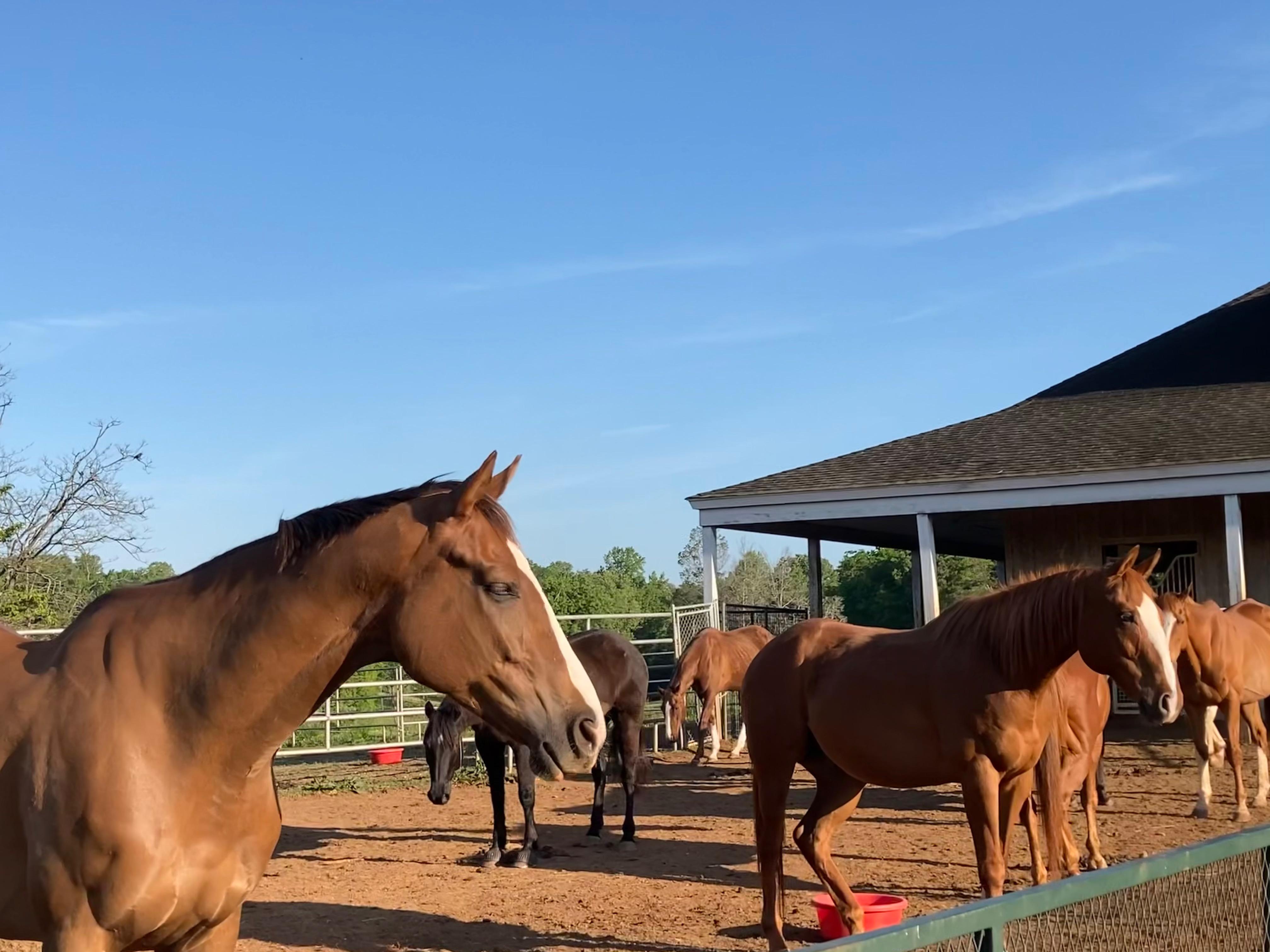 And with that, she met the trailer, opened her farm and her arms for her blaze-faced, leggy, red colt (now gelding) to come home and retire. And now, up on those verdant Virginia fields, Juice is going to get to live out his future chapters with the person who made his first chapters imaginable. And in that circle, there’s luck, beauty, and so, so much love. 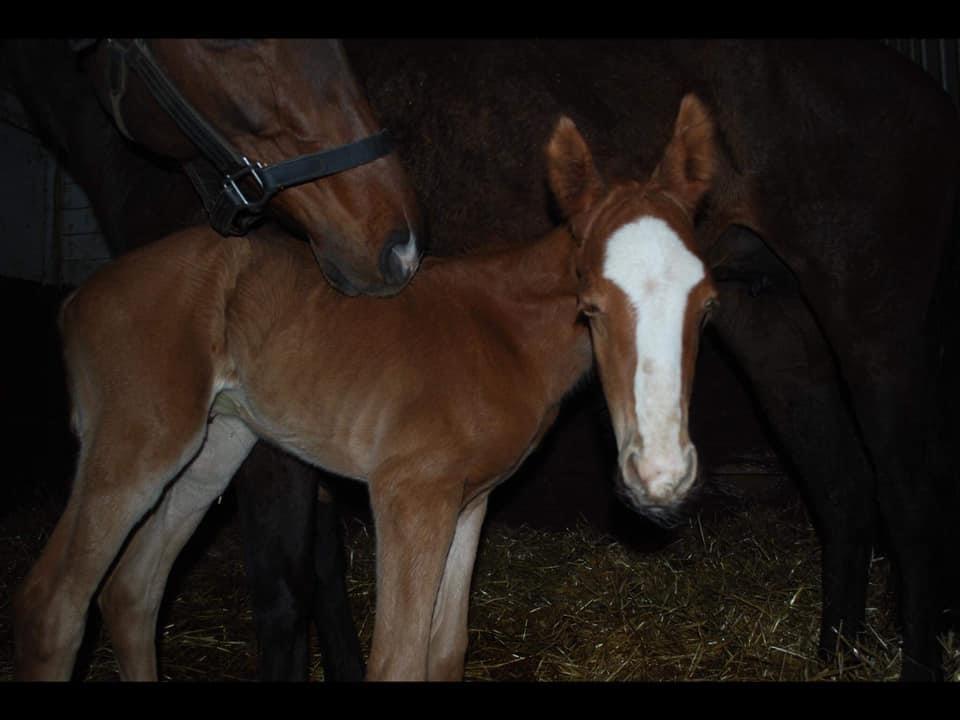 Juice as a newborn. Photo provided by Cathy Gulick Sanders.

And with that, in a way, I guess we all get to start again.