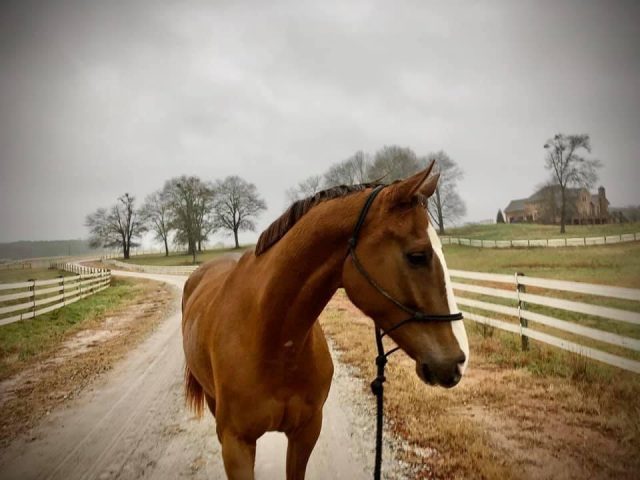 May 26, 2021DeAnn SloanAubrey Graham#ESSAYComments Off on Of Love and the Pursuit of Soundness: A Story of (and for) Juice, Part II

In the second part of her three-part series, Aubrey Graham discusses the quirks and difficulties of bringing along Juice… and how she grew to love him, even through ulcers, vertical rears and soft tissue injuries.

If you missed the first part of this series, you can catch up here.

Pulpituity arrived at Bentfork Farms, where I boarded (and lived), in early December 2018. He was just as tall and lanky as I had been told. Eventually I gave up trying to be clever about naming and the somewhat ridiculous name “Juice” stuck. This “Juice” was more handsome than expected, sported soft roaning through his hindquarters and engaged the world with a kind, curious eye. 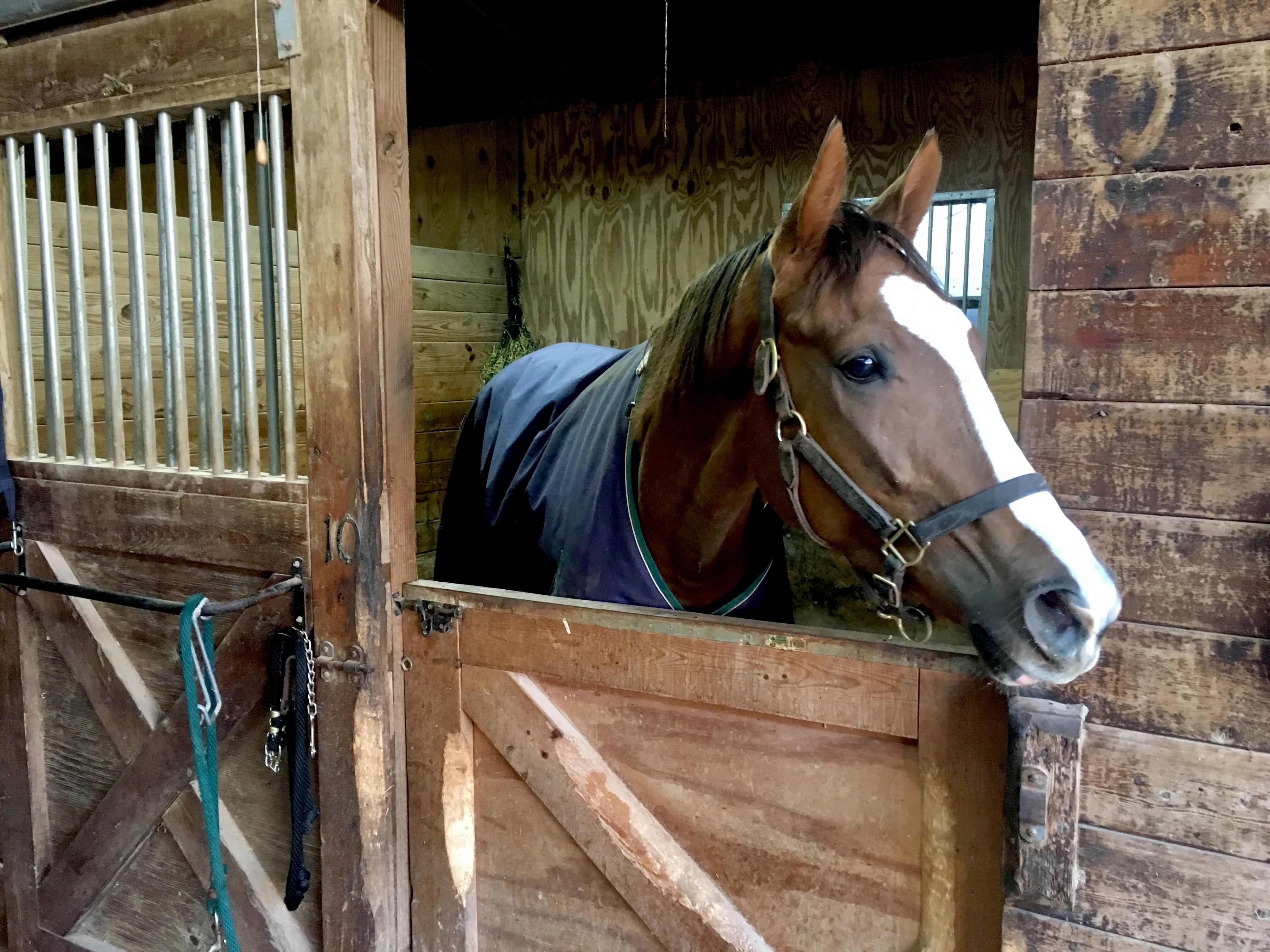 After I posted to social media that he arrived, his connections sent along his race pictures … they were stunning – in the literal definition of that word. In each, he was vertical — like VERY vertical. Well… at that point “Professional Restart Only” suddenly made a whole lot more sense. 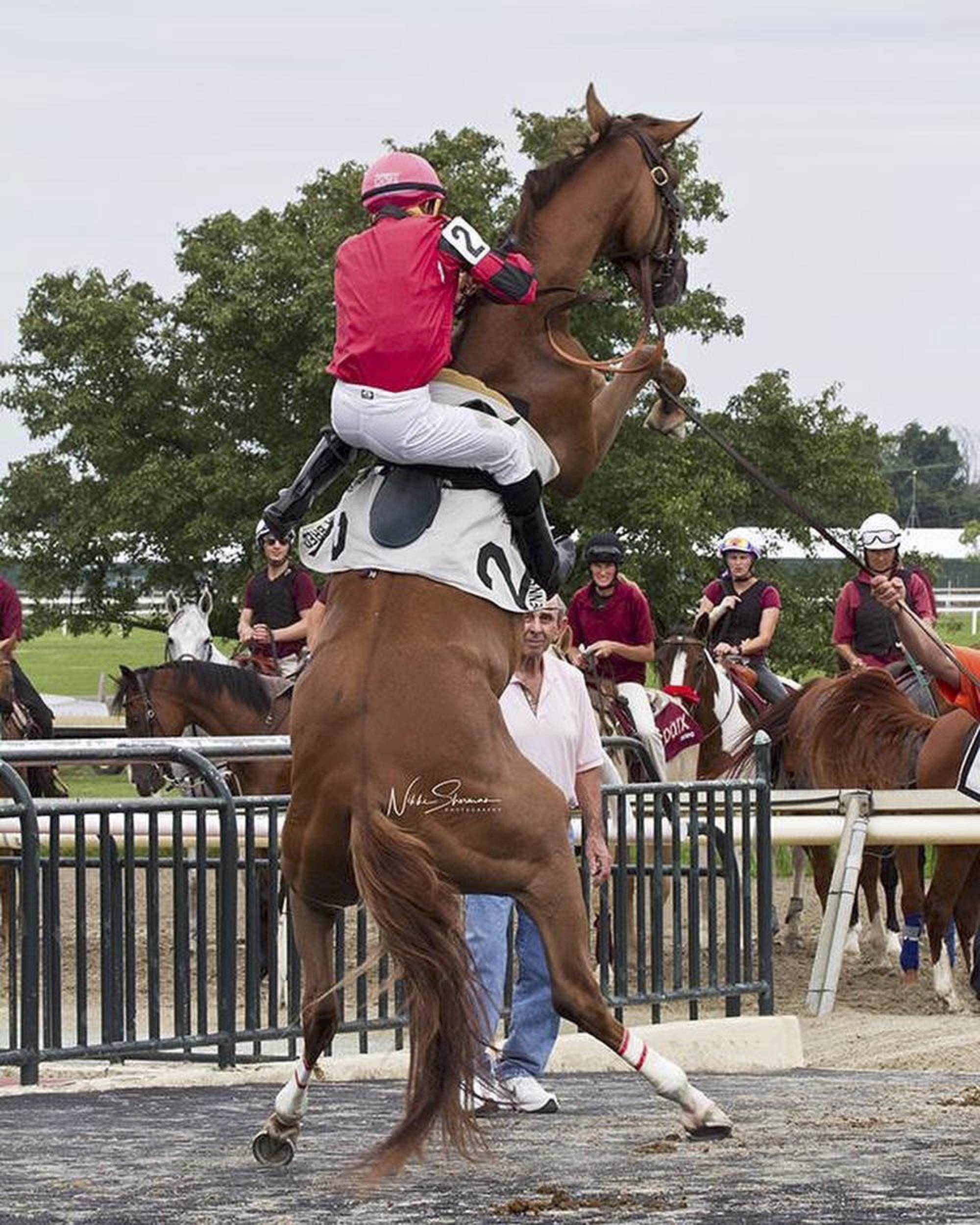 Parx Racing photographer, Nikki Sherman, captured quite the picture of Pulpituity during his one race. I can’t help but love the faces of his trainer and the onlookers. Photo by Nikki Sherman.

True to those images, he wasn’t particularly easy. 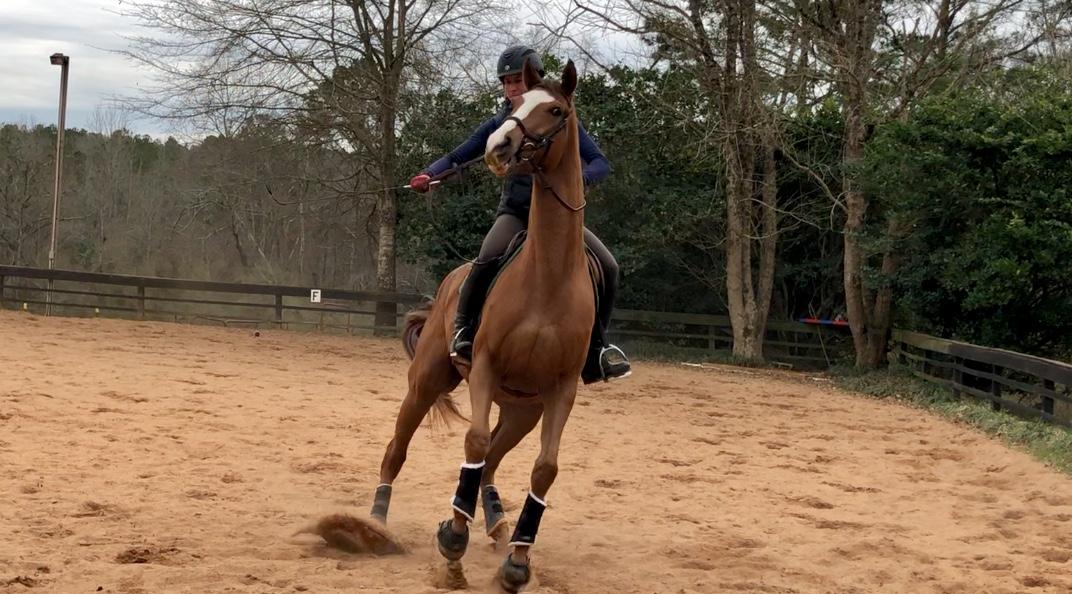 Juice had some opinions while getting restarted under saddle. Photo by Kassie Colson.

Each morning, until I gave in and kicked him outside 24/7, he tried to run through his stall door. He had ulcers and needed to put on a few hundred pounds… all while still growing. This was a horse who refused to wear the same shoes for more than a few days at a time and who, despite all the training possible, could not stand quietly on the crossties to save his life. The first time I gently hosed his face, he insisted that he was drowning. He plowed through my helpers who tried to keep him still at a mounting block and, of course, he would go vertical under stress. 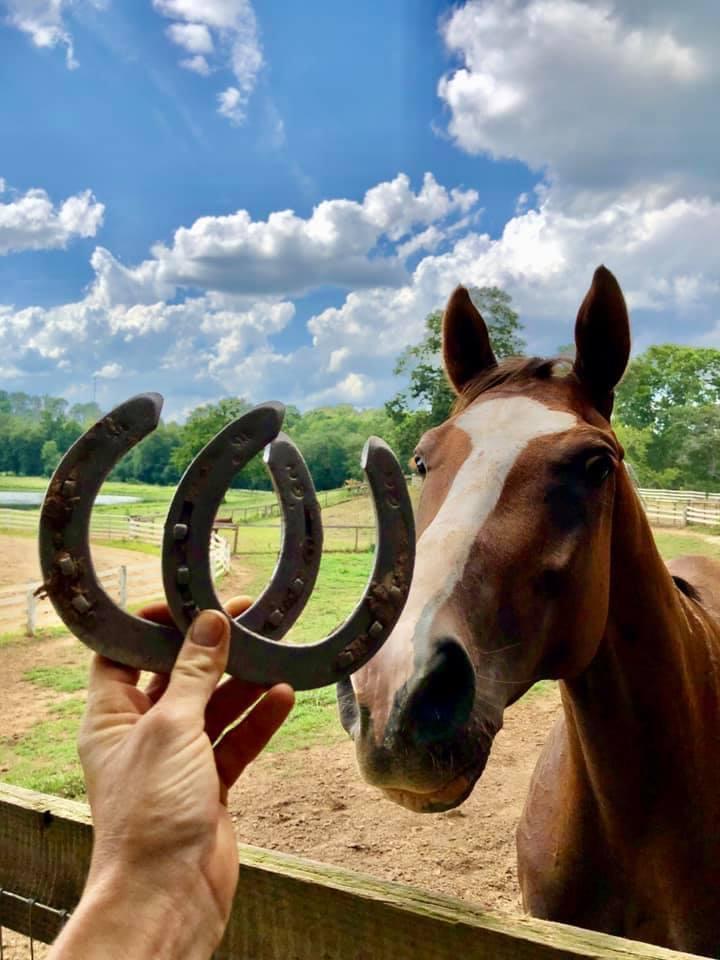 I have the best farrier, but Juice liked to make his life hella hard for a while. Photo by Aubrey Graham.

And I loved that horse. Every stupid cell of him.

If you gave him the time of day, he was worthy of every moment. Besides learning quickly under saddle with a jump that put his knees to his nose, he was personable. And he snored – more of a rhythmic wheezing than a real snore, but it was stupidly endearing. And when he finally took a breath, he would lean into you, tug at your zipper or jacket, nibble your boot and just be one very good, very big horse. 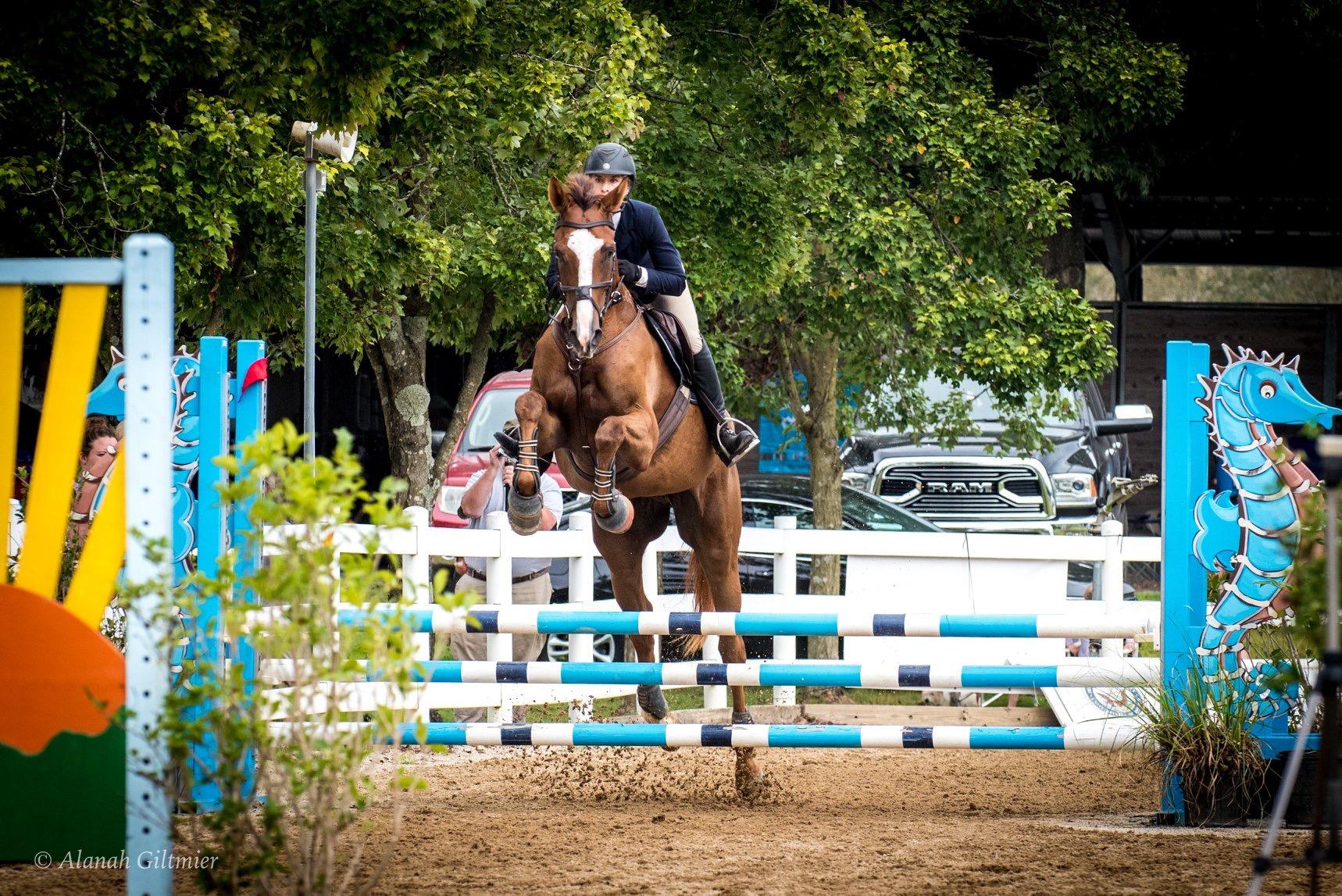 Juice competing later that year in an .80m class at HJ Fox at the Georgia International Horse Park in September of 2019. Photo by Kassie Colson.

By the time we ran through two months of GastroGuard paste and had moved to the injectable version, my four-year relationship was toast. The October wine-tasting on the coast wasn’t an engagement trip. We weren’t the people we wanted the other to be. He kept the truck, I kept the trailer, suddenly aware that I had nothing to put at the front end of the bumper pull. I had committed to a horse trainer’s life without academia and, then, had to recommit to it without a partner, without a safety net.

Juice moved during his third injection – lunging forward as I removed the inter-muscular syringe. Minutes later, yawning, pawing and covered in hives, I called the vet. The reaction grew… not to the golf-ball-size that the vet thought I was dealing with, but to 18 inches by 25 inches standing three inches off his neck. Forty-eight hours of “we’ll see if his system can fight it” were excruciating. I knew full well that if he couldn’t, I’d have to figure out the right number to call for a backhoe. 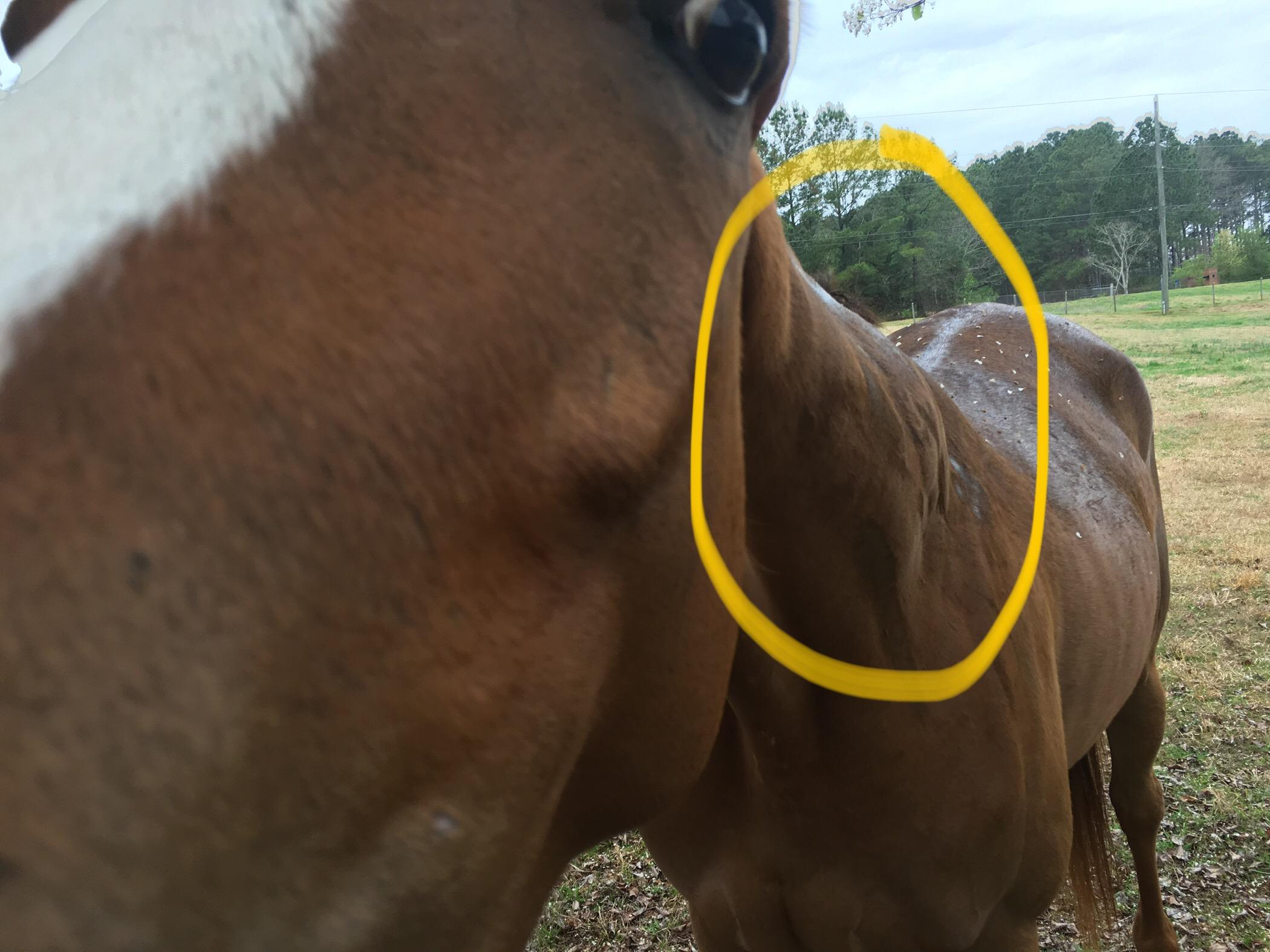 A not-so-flattering capture of Juice’s growing allergic reaction to the GastroGuard injection. Photo by Aubrey Graham.

Seeing as my ex didn’t show much interest in coming home to pack his own things, I began the quotidian heartbreak of placing his items into boxes. I spaced it out though, pairing the packing of cords, ugly white plates, shirts I used to sleep in and art I had hauled across the Atlantic for him with frequent trips out into the pasture to measure Juice’s ever-expanding allergic reaction and my panic. I wasn’t ready to lose two things I loved in one week. At least one had to fight.

Two years later, I witnessed the same, game horse over the same sized fences. Erin, one of my former Emory students who now worked at my barn and leased Juice, took him in the cross-rail and amoeba classes at a local jumper show. Cantering to the second fence of the course, I yelled from the side lines, “Let him go! Trust him!” She loosened her reins and he packed around the course like he had never missed a beat. That was him. Big, red, goofy, but damn, he was good. 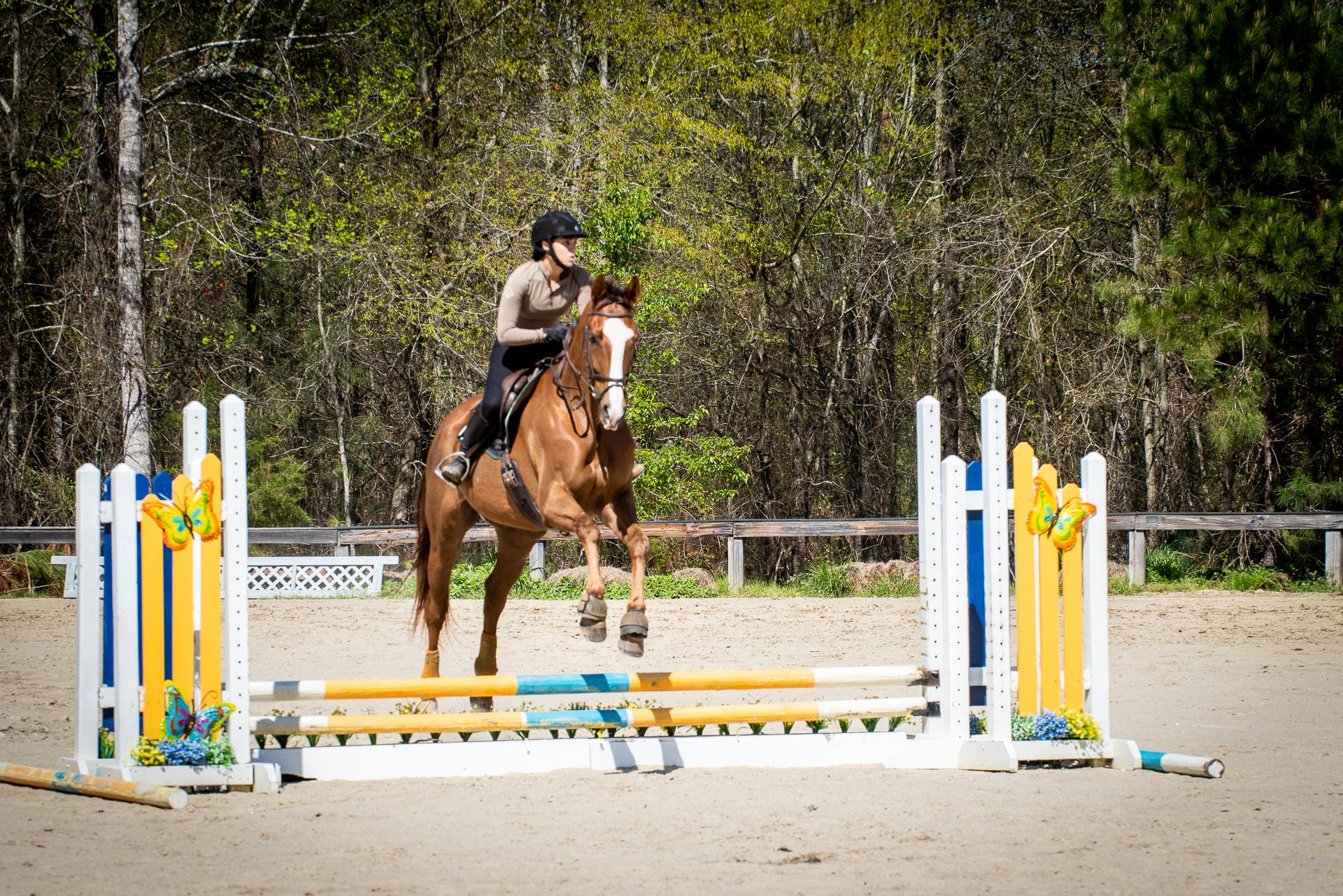 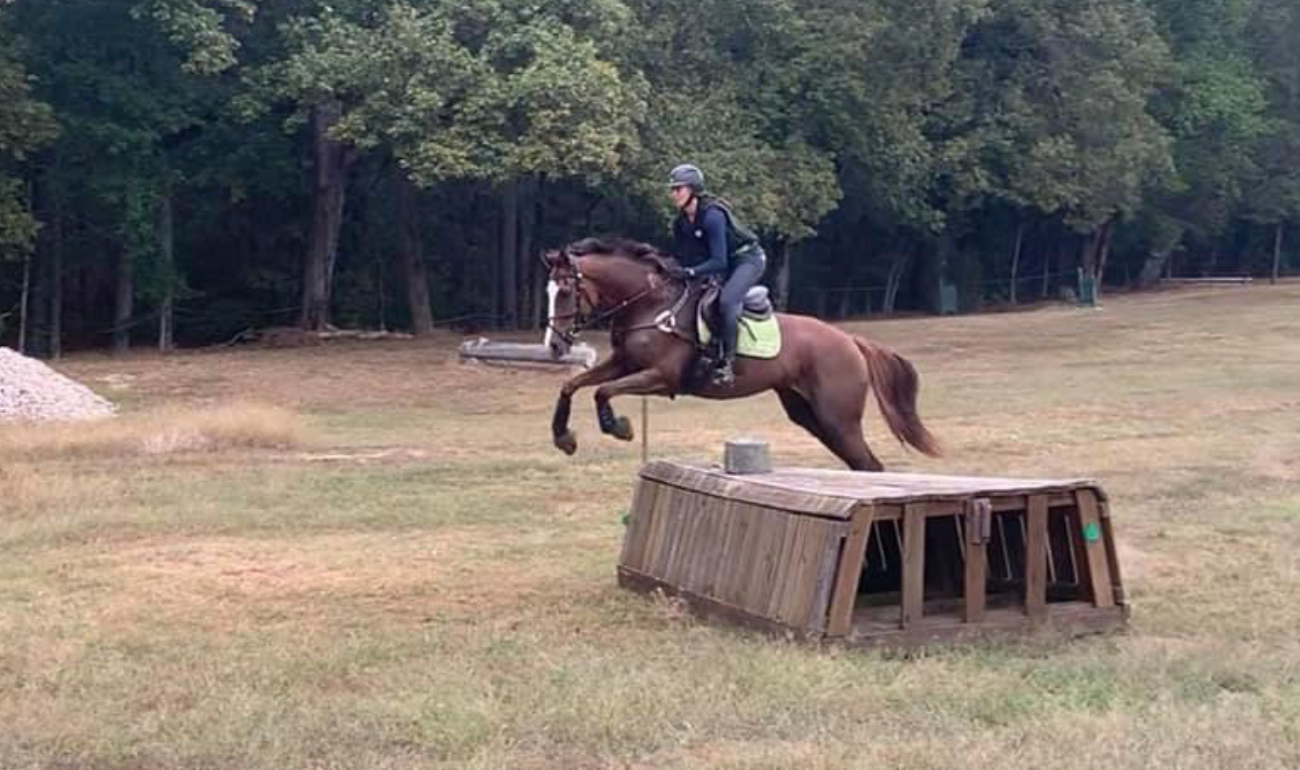 Juice at the Lucinda Green clinic at Ashland Farms in October 2019. Photo by Holly Breaux.

Less than six months after I moved Juice and Forrest to my newly minted Kivu Sporthorses and Training facility, his suspensory condemned him to study the landscape of his stall for 10 months. Well… even longer than that if we’re being precise, as he was too stall-rest-insane to simply “turn out” at the end of his sentence. Instead of an incremental turnout schedule to return to normal, I had to try to ride him back into health and soundness. Easy in a stall, he was not. Easy to bring back out, he most certainly was not. Remember his vertical skills? Let’s just say that he made sure they got a good workout. 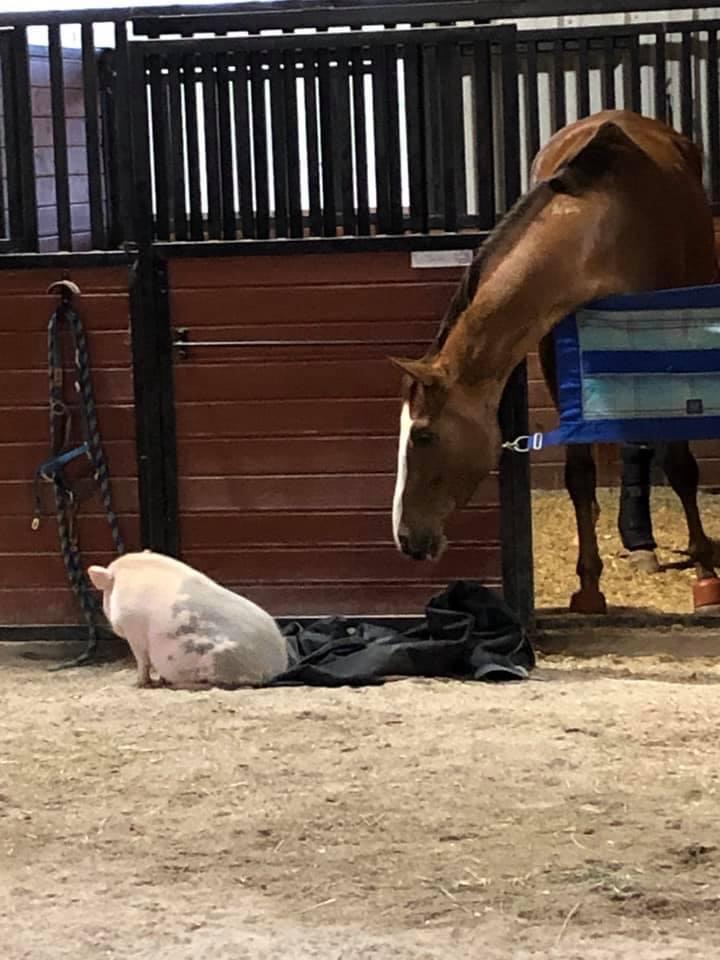 Juice was unsurprisingly not thrilled about stall rest, but at least he had some company. Photo by Aubrey Graham.

Other than an unusual situation during a colic, I was the only person who moved him outside of his stall due to those exceptional vertical and capriole abilities. Professional enough? He sure tested that.

“Aubrey, I think Juice is colicking.” Alanah, my awesome barn-help hurried her words. Alanah is excellent with horses, but Alanah hates phones. That she called was all I needed to know — I had to head home.

“Pawing, biting his flanks, trying to lay down”

I explained how to give Banamine (orally) and sent her out with him on a walk.

I wasn’t home because I was on a date. I was out with a man that I had fallen for despite the fact that he was unexpected. A cop, a mounted patrol lieutenant at that, a man that wouldn’t stay over at my farm, but would spend hours talking about the horses, loved shows, helping to feed, and who would occasionally hustle down to see me just to take me to get cheese dip because I sounded tired. A man who had another life. A man who I was, by that point, hell-bent to keep around regardless, even if keeping meant seriously shedding convention. Because what’s love if not doing everything to try to make it work?

The colic call came as we both got back to his apartment in the city – 45 min from my barn.

“I know,” he said, going to change into his relax-about-the-house shorts.

“Come with me.” It was more hope than an imperative.

His hesitation was long enough for me to start driving. Be damned.

By the time I got to the barn, Juice was alternating between grazing happily and causing Alanah to waterski on the M-10 footing through the barn. A lead rope has rarely been pressed into my palm so quickly. The man showed up 20 minutes later, bearing ice cream and beer. Both horse and human survived that night. 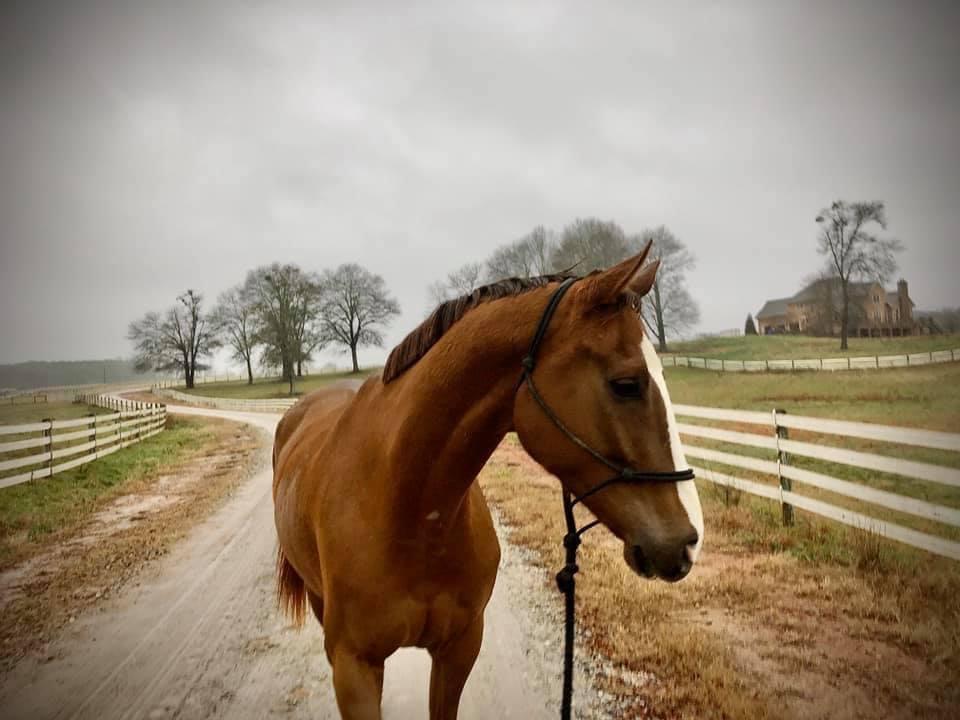 Juice’s walks got more and more difficult as he spent nearly 10 months inside his stall walls working to heal his suspensory. Photo by Aubrey Graham.

Part III will be published tomorrow.