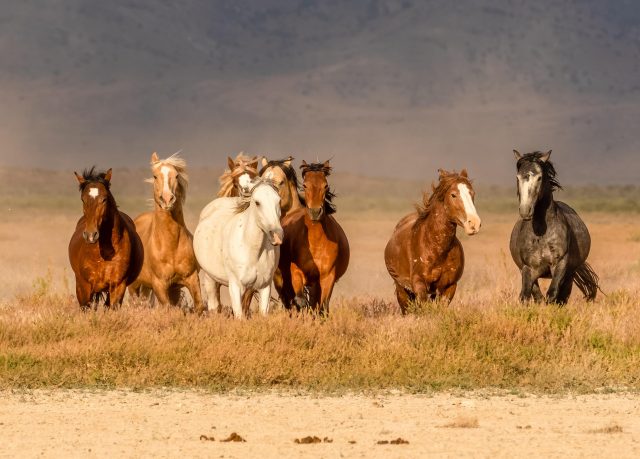 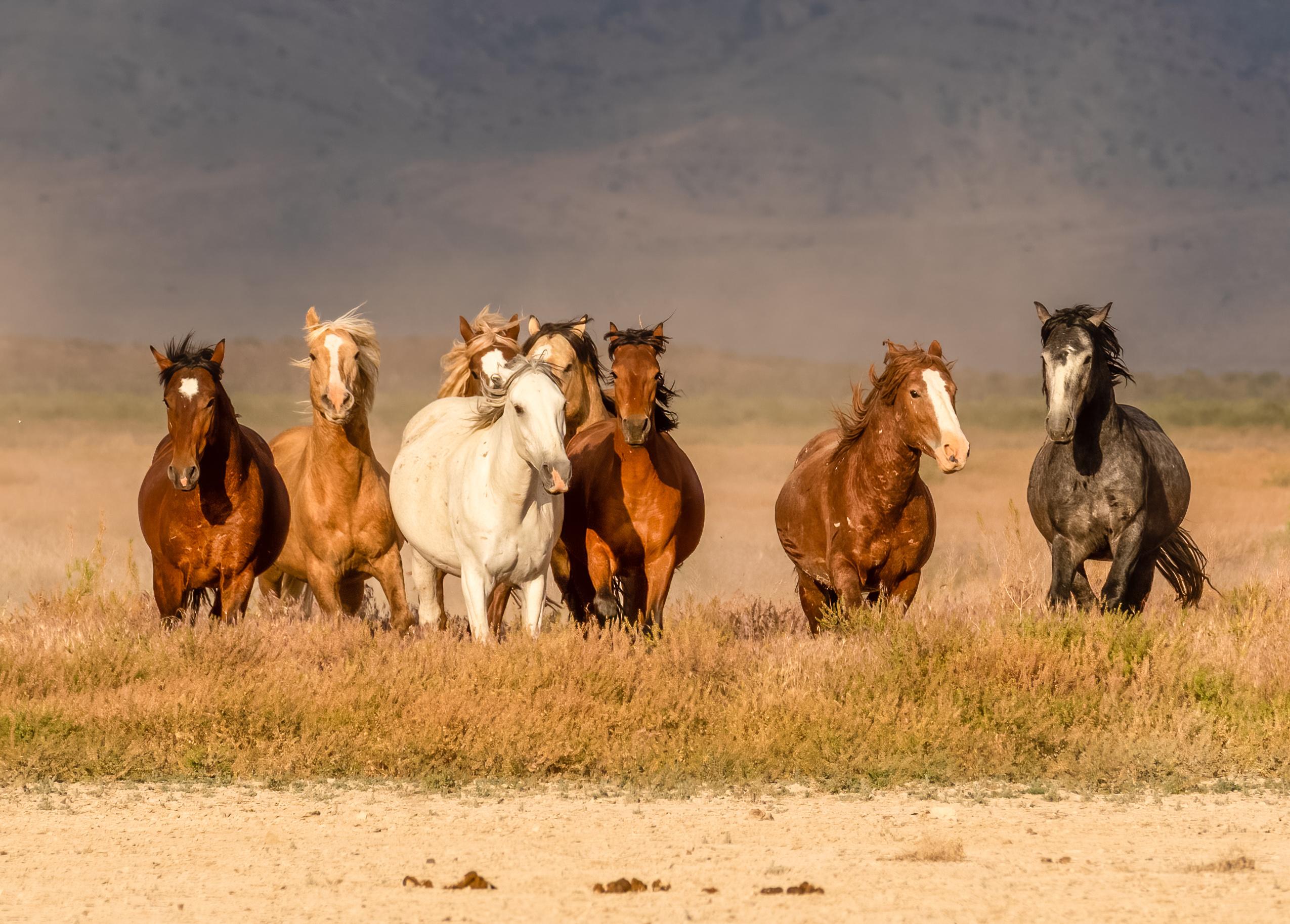 “I have my freedom, but I don’t have much time, faith has been broken, tears must be cried,” sang Mick Jagger in The Rolling Stones 1971 hit “Wild Horses.” In an intersection of art and politics, Congress later that same year passed the Wild and Free-Roaming Horses and Burros Act, inked into law by President Richard M. Nixon. Jagger’s lyrics could have been an anthem for wild horse protection – a cause that stirred people who love America and lamented the poisoning, shootings, and round-ups that left around 25,000 of the animals on the range.

As the enactment of the 1971 law calmed the public storm concerned about the horses’ plight, advocates like Velma Bronn, affectionately known as “Wild Horse Annie,” felt a new day dawned for horses. But enactment and implementation are two different matters, she’d learn in the years ahead. By 1973, the federal Bureau of Land Management was rounding up so-called “excess numbers,” and adopting out those captured horses and burros to private owners. Many of them ended up in the slaughter pipeline, and there’s been constant controversy over the population levels and Herd Management Areas (HMA) ever since.

Truthfully, there is no wild horse and burro population problem on federal lands; the issue is the greed of the National Cattlemen’s Beef Association (NCBA) and other livestock interests who want no competitors for the grass that grows on our public lands. There are now more than 4.3 million cattle and sheep on our western lands – 30 of these domesticated ruminants for every wild horse. These ranchers have long wanted to exterminate the wild equines, who eons ago occupied a central role in the North American ecosystem, or to reduce them to remnant populations that are the equivalent of functional extinction.

It’s an outrage that while these ranchers degrade our public lands and enrich themselves at taxpayer expense, they are actively seeking the permanent eradication of our beloved wild herds. Recently they’ve gotten a perplexing assist from the Humane Society of the U.S. (HSUS), Humane Society Legislative Fund (HSLF), Return to Freedom, the so-called American Mustang Foundation (AMF), and others who’ve joined their coalition to implement a maniacal scheme known as the “Path Forward,” which calls for the mass helicopter roundup of as many as 30,000 wild horses and burros a year – with a 10-year price tag of $5 billion, according to former acting BLM director William Perry Pendley. The helicopter roundups themselves are enormously expensive, and the federal government is shelling out around $1,500 per year per horse to keep them in holding facilities instead of implementing the use of PZP birth control, an immunocontraceptive that can be administered by dart to the horses for $35 per horse per year. If you’re keeping up with the math, you’re likely scratching your head wondering how and why any of this makes sense.

But it all adds up once you follow the trail of money. Those who seek to profit from government contracts to manage the warehousing of the horses kept in private holding facilities are intent on continuing the roundups and there are hundreds of millions of dollars at stake. CQ Roll Call, a well-known publication inside the beltway, and Earth.com have both published stories about the conflict of interest between a key federal employee and profiteers.

In recent years, the BLM has accumulated some 50,000 or so wild horses and burros in holding facilities, while roughly twice that number continue to live wild and free on the range. Since the Path Forward roundups began, it’s estimated that another 20,000 have been moved from the range to holding, and the number will continue to grow, with 3,500 wild horses living on five Wyoming HMA’s and the famed Onaqui horses of western Utah set as the next big target to be corralled in July. Other herds in Oregon, Arizona, and Nevada are also slated for large-scale roundups as well. While the public lands ranchers cheer the coming extinction of the wild herds, the silence from the big animal groups who support the roundups is deafening. Not only are they complicit in the suffering of the horses, but they are also doing nothing to pressure the BLM to abide by its own Comprehensive Animal Welfare Program (CAWP) to prevent horses from suffering injuries and death during the roundups. As horses are chased to the point of utter exhaustion, terrified foals are separated from their mothers and the BLM shoots horses with even the slightest injury or abnormality. The big animal groups sit idly by and watch it all happen while attempting to convince their donors and supporters that somehow the carnage and suffering is in the horses’ best interests.

But there is hope. With the confirmation of Deb Haaland as Secretary of the U.S. Dept. of Interior – a tireless champion for wild horse protection in the U.S. House of Representatives over the past two years that we’ve been battling this injustice – we may finally see some balance imposed on the government’s approach to wild horse management. Haaland cosponsored an Animal Wellness Action-conceived House Appropriations Amendment that passed by a voice vote last July and would have forced the BLM to use $11 million of their wild horse budget on PZP instead of roundups, and she signed numerous letters to key officials calling for wild horse and burro protection in her role as Chair of the House Subcommittee that oversaw federal lands, and Vice-Chair of the full Committee on Natural Resources.

And earlier this month Animal Wellness Action, the Animal Wellness Foundation, and Center for a Humane Economy, Western Watersheds, and The Cloud Foundation joined a coalition of more than 70 animal and equine protection groups, wild horse-related businesses, and environmental organizations in a letter to Secretary Haaland calling for a freeze on grazing permits and for the Secretary to direct the BLM to base its wild horse management decisions on science instead of political pressure from allies of the livestock industry. The letter references the National Academy of Sciences 2013 study “Using Science to Improve the BLM Wild Horse and Burro Program,” which voiced a scathing rebuke of the BLM’s failed practices long before the Path Forward scheme was ever written.

While we’re hopeful about the direction of the Dept. of Interior under Secretary Haaland, we must remember that there are thousands of issues her department oversees, and tens of millions of advocates pressing for a variety of changes in wildlife, environmental, and energy policies and we’re going to have to continue working hard to ensure that wild horses remain a priority. Join us today by calling the White House at 202-456-1111 and asking President Joe Biden to stop the roundups. You can and will make the difference. 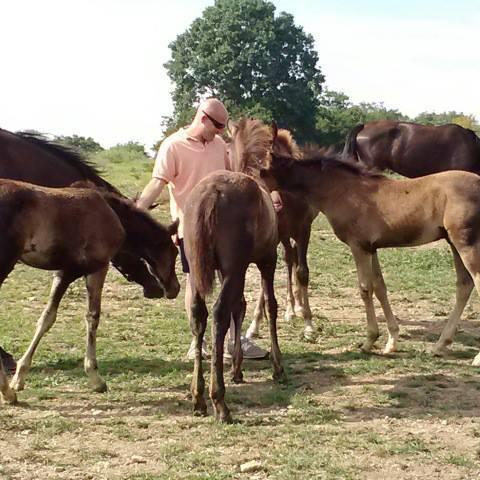 Author Marty Irby with weanling foals and mares in Tennessee. Photo from the Irby Family Archives.

Marty Irby is a former 8-time world champion equestrian who currently serves as executive director at Animal Wellness Action in Washington, D.C., and was recently honored by Her Majesty, Queen Elizabeth, II for his work to protect horses. Follow him on Twitter, Instagram, and Facebook @MartyIrby.