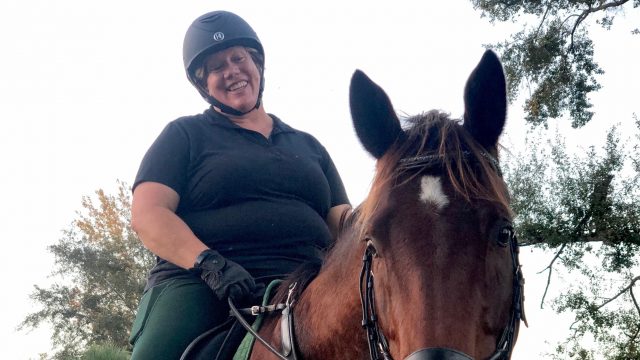 “Feeling ashamed or embarrassed can ruin so many good things, and the fear of feeling that way can trap me in a small box of a comfort zone. I can stay there feeling disgruntled and unhappy, or I can push out, push on, keep going and love whatever happens next.”

Following the announcement that the Retired Racehorse Project‘s 2020 Thoroughbred Makeover and National Symposium, presented by Thoroughbred Charities of America, will be postponed to 2021, competitors have been working to decide what comes next for them and their mounts. Today, blogger Libby Henderson discusses the changes in her life and how they are affecting her progress with Spider.

The only constant is change …

Phrases like this one become clichés because they resonate with many people. And this one has certainly resonated for me this year, and particularly over the last month. I always been resistant to change (well, except for in technology – I love new gadgets!) but as I age, I’ve become even more so.

Sometimes, though, you just have no choice in the matter. After seven months of working from home, with the view from my office window being my ponies in the pasture, we’ve returned to work in the office. Right before we were due back, our office system was hacked, and we went over three weeks without the ability to access any of our work-related systems. (Of course, in the new paperless world, this meant everything was inaccessible!) Add in the change to standard time (which is universally hated by all horse people that have office jobs) and the ridiculously time-consuming process of getting a new truck, and a month has gone by and I feel as if I’ve done nothing at all. (I’m deliberately ignoring last week’s Election, as we all need a break from that!)

Even good change disturbs routine and disrupts comfort zones. Last month, I talked about expanding comfort zones and I had no idea how much wider that comfort zone needed to get! Working from home the last seven months made getting ponies ridden much easier. My commute keeps me in the car now for a minimum of an hour and a half every day. I know that many have much longer and more aggravating commutes in higher traffic, but having the extra time at home to ride, clean tack and do barn maintenance was a luxury. Without that time, riding during the week is almost impossible — especially without a lighted arena.

Even when I’m not sure what, exactly, he’s doing. Photo by Kristina Littlejohn.

Even something as exciting as having a new truck for the first time in nearly 20 years is terrifying and stressful. The freedom to transport your horse yourself is so empowering, and my truck had taken care of me for 19 years and 326k miles. It was a member of the family. Seeing it drive out of the driveway this week with a young trainer friend, I expected to be hard. Assisting her with her first independent ride for her pony was a wonderful feeling, though a bit sad. I’ll adjust to a different truck, and I know I’ll appreciate all its bells and whistles, even if I feel as if I need a step ladder to get in and out of it! The first few weeks has been disconcerting — who knew there was so much paperwork to be done to properly buy and sell vehicles?!

All these changes unsettle me, make me tired and, therefore, less likely to get on and get rides done. We have had a few lessons and Spider (JC name Gossamer) got to school cross country for the first time! Well, if you consider stepping over several logs in a row to be cross-country, he and Kristina were amazing. His first out of town show is scheduled for December, and that is exciting, but scary too.

Even when things are perfect, riding at home alone is always hard. Finding the “motivation” to ride when laundry needs to be done, groceries need to be bought, and it is dark by the time the work day is over is the struggle familiar to most adult amateurs. It is even worse when your own brain turns judgy on you and questions your very suitability to be training this horse, or to be riding at all.

Camille Byrd assists me with finishing up lunging Spider. Photo by Kristina Littlejohn.

This past weekend, I got in a long hack on one horse and lunged and rode Spider. I was fortunate enough to have a friend get some video of me riding Spider. For years, I have avoided pictures and video of me riding. I even went out of my way to avoid riding in any ring with mirrors. In my mind, I could decide how I looked in the saddle (as graceful as Sinead!), but when faced with photographic or reflective evidence, I am forced to admit just how bad I really am.

I sat down last night and watched the video. And felt as if I should just give up altogether. My position is weak, I appear to be posting off Spider’s mouth, with hands and elbows that flop everywhere. It is awful. (Sidenote: After watching the video, I have concluded that this horse is actually a saint to put up with me. He has definitely earned gobs and gobs of cookies!)

Camille Byrd gives me some suggestions. Photo by Kristina Littlejohn.

What am I doing? I don’t have enough time, I don’t have unlimited funds. And in addition to all those things, I struggle with a lower-back issue that has me hobbling around about half the time. Why am I putting myself, and all the people helping me, through this?

Will I be a big-time rider someday? No. Will I be able to quit my office job and restart OTTBs for a living? No. How much do I really want to do this anyway? I could do my horse life as an owner and sit on the sidelines, watching and critiquing. That would surely be easier, if not cheaper. (And I do have a fantastic sense of snarkiness – I might be well suited as an arm-chair critic!) But, instead, after a small pity-party and self-castigation moment last night, I vowed to do more. I vowed to work harder. I vowed to work on my fitness and get stronger.

In my second blog post for Horse Nation, I wrote about being awarded the Elizabeth Gilbert Award at Eventing Camp last Winter. I was given that award because, despite how ridiculous it is that someone riding at my level would go to Eventing Camp, I showed up and did the work anyway. While we were at camp, Dr. Jenny Susser talked with us about deciding whether we “wanted to want” to do this, or did we actually WANT to do this. As I tacked up to hack out on cross country and watch everyone school at camp, I realized that I really WANTED to do this. It used to be my happy place, and it can be again. In order to get back there, though, I need to get out of my own head, turn that inner critic off and go back to just doing the work. 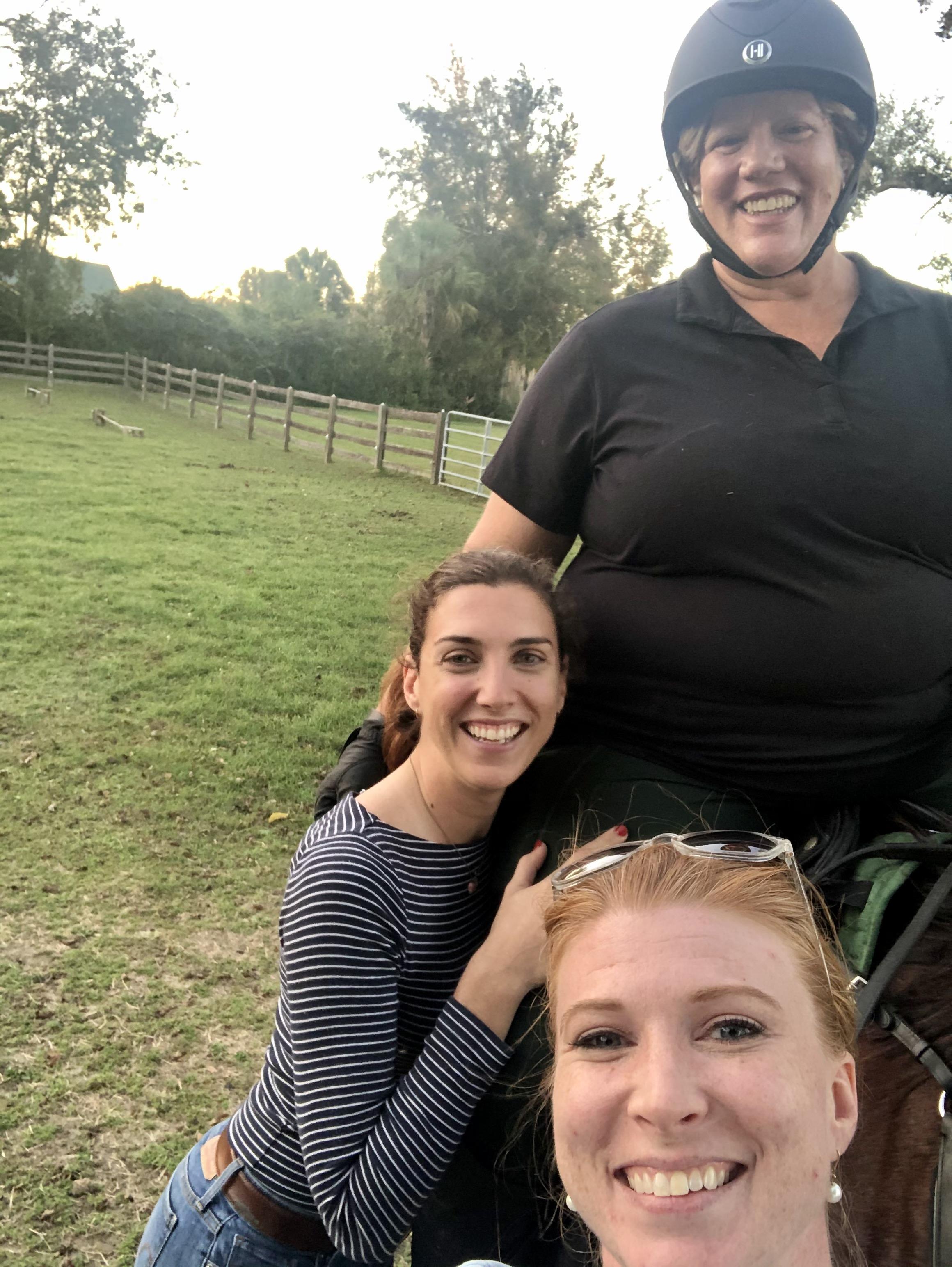 In the midst of my naval-gazing and inner pondering about how to get myself to do more, and to really do the work this year, I have learned that I will make the effort if someone else is counting on me, or I have a scheduled lesson or ride. Now, I need to figure out how to use that to get the rides at home done, where I am only accountable to myself.

Feeling ashamed or embarrassed can ruin so many good things, and the fear of feeling that way can trap me in a small box of a comfort zone. I can stay there feeling disgruntled and unhappy, or I can push out, push on, keep going and love whatever happens next.

Y’all tell me I look like Sinead when y’all see me at Poplar in December, now, ya’ hear?