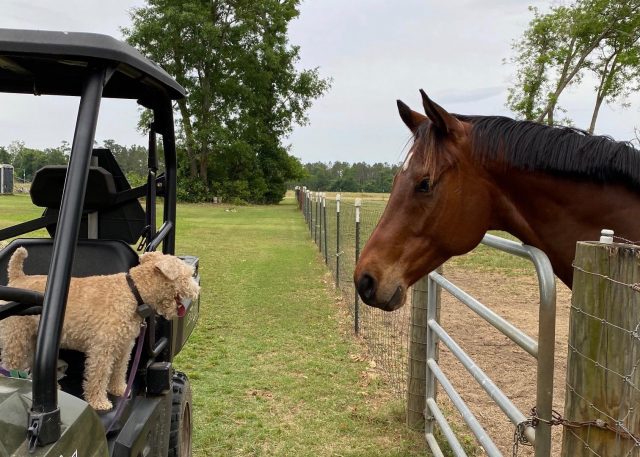 April 23, 2020DeAnn SloanContributor#RETIRED RACEHORSE PROJECTComments Off on Whatever Happens, Love That: Libby & Spider

“…as I mused on how badly I felt about not getting more done, I realized that I actually am showing up and doing the work, and loving whatever happens as we negotiate this situation.”

For 616 accepted trainers, the journey to the Retired Racehorse Project‘s 2020 Thoroughbred Makeover and National Symposium, presented by Thoroughbred Charities of America, has begun! Over the next eight months, four of those trainers will blog their journeys, including their triumphs and their heartbreaks, successes and failures, for Horse Nation readers. Today, blogger Libby Henderson examines what it means to put in the work and still be able to love the outcome, come what may.

Like so many others who aren’t on the front lines fighting this thing and keeping the world going (and thank you to all of those who are first responders, work in health care and other essential careers!), I’ve been in my own little bubble for almost four weeks now. I’ve been reading – a lot. I wish I could say I was reading books about self-improvement and horsemanship, but mostly I’ve been deep in the world of chick-lit, primarily books with happy endings. Now, I don’t mean to discount these types of reads — sometimes they even have horses! – but, you don’t typically adopt a life changing motto, or even find a philosophy that helps you cope within these pages. 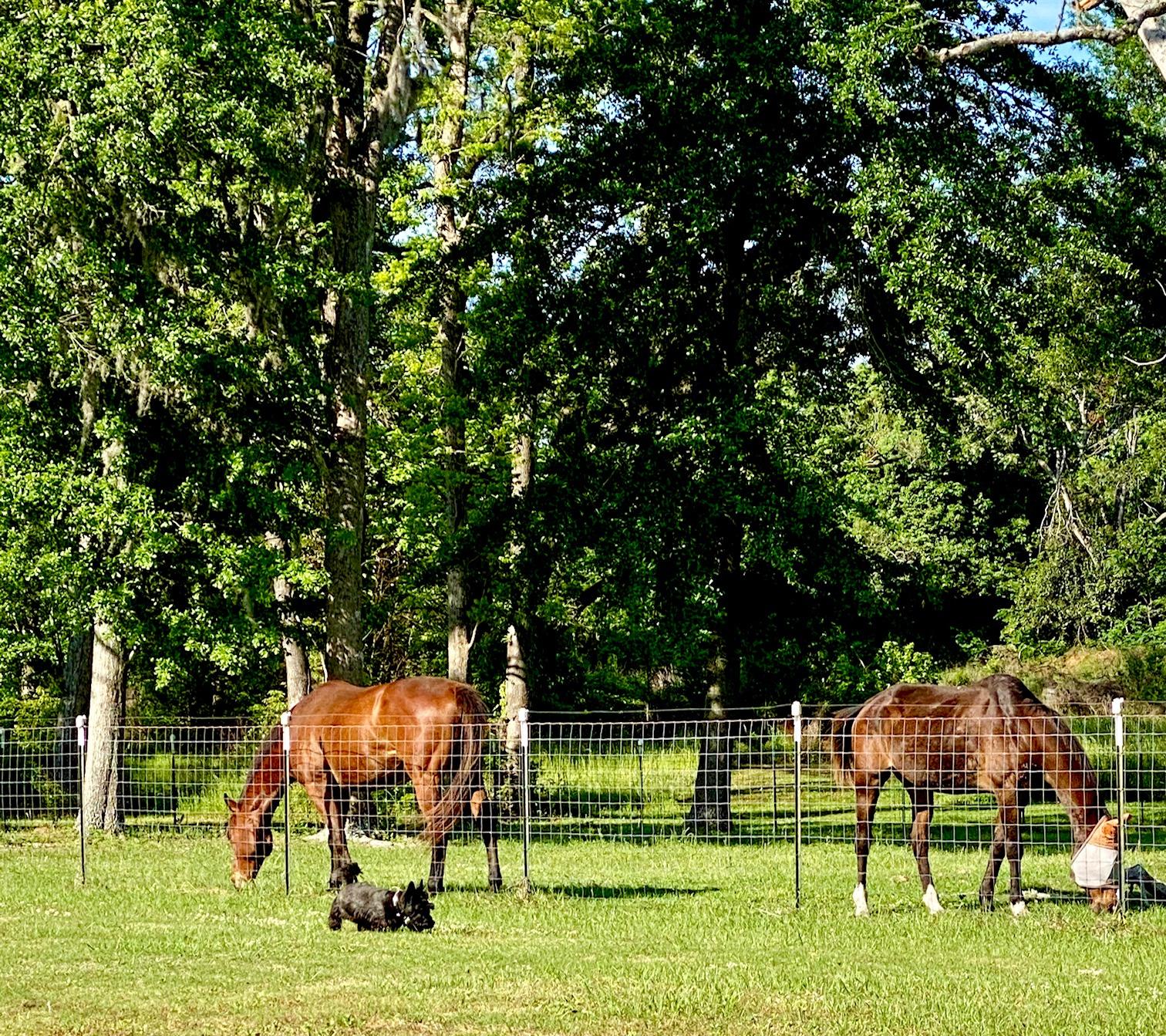 But this week? I did. Over the weekend, I finished Matchmaking for Beginners by Maddie Dawson. Sounds cute, right? And it is, but it had a deeper theme that really struck me where I am with Spider this week. One of the main characters is an elderly eccentric woman who offers the other main character her life philosophy: “Whatever happens, love that.”

When I first read it, I thought, “Yeah, that sounds passive. What about making your dreams come true. What about knowing what you want and going after it? What about putting your nose to the grindstone and doing the work?” I alternated all day Saturday between reading and fretting and feeling guilty about the fact that I’m reading and not getting Spider ready for the Makeover. All day I mused about whether learning to love whatever happens could apply to what I’m doing, or not doing, in preparation for the Makeover. 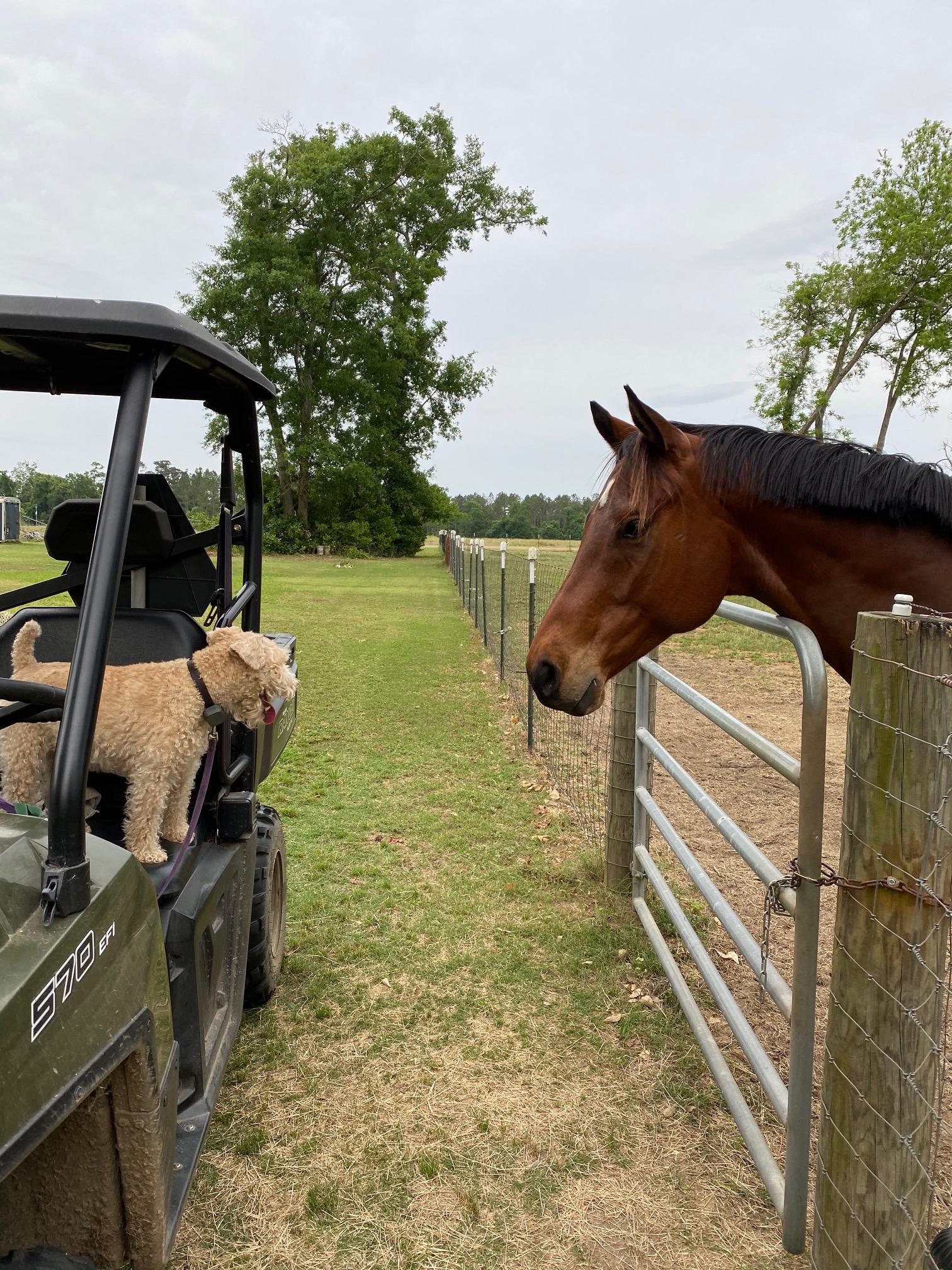 Spider and Opie the Terrier. Photo by Libby Henderson. 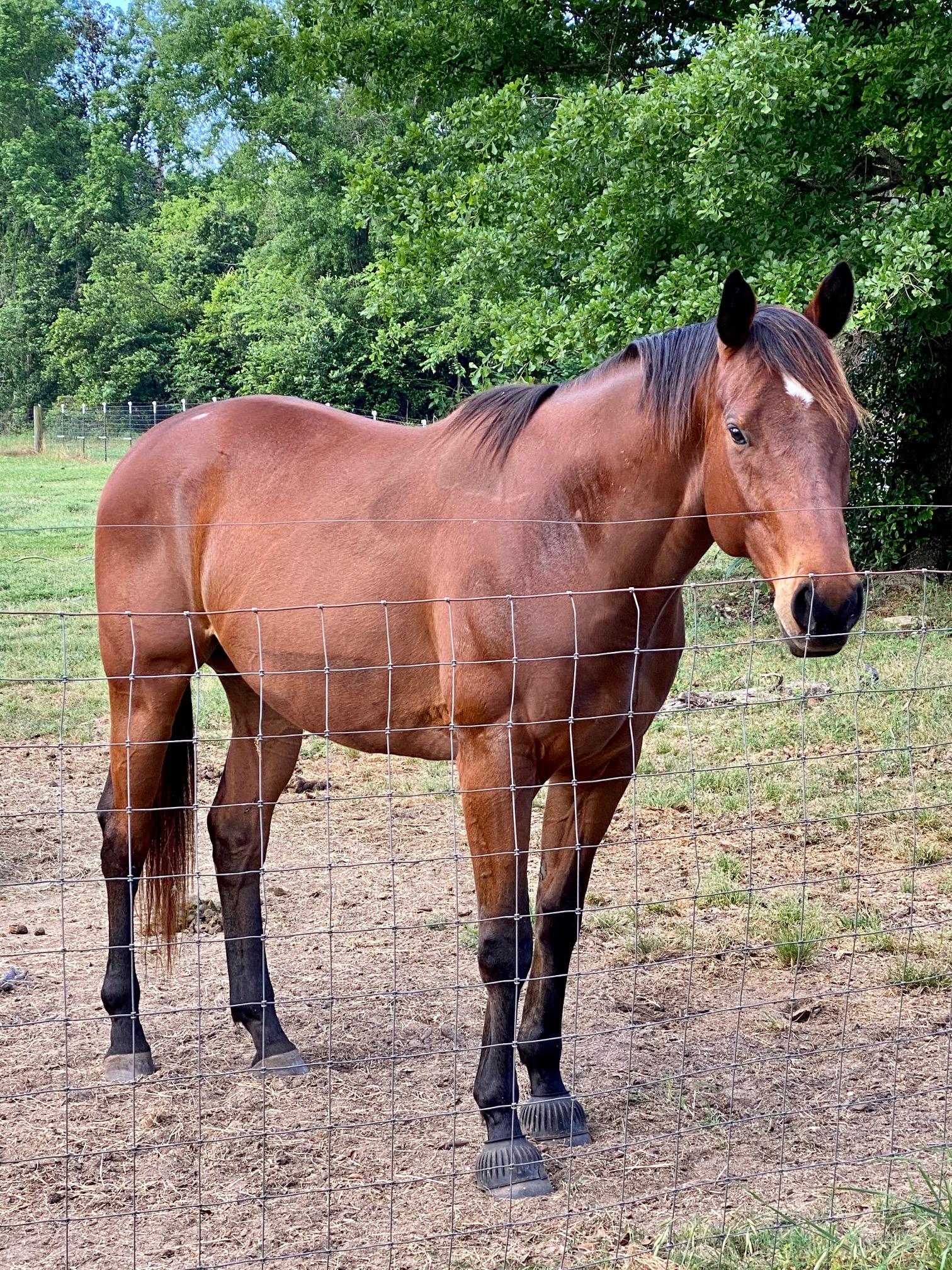 Spider standing bored in his paddock. Photo by Libby Henderson.

I mentioned in my last post that I took my mare to Tik and Sinead Maynard’s Eventing Camp at the end of last year and that Spider went along for the adventure. What I didn’t explain was that I’d gone to camp, despite the fact that I was completely unfit and unprepared. Earlier in the summer, I had a lower back injury that had made just walking to the restroom at work painful and left me miserable most of the time. In October, I was horrified to find that I was at my highest weight ever. I started working on my nutrition at that point, but I was too uncomfortable to do much of anything about the fitness part of it until December. A smart person would have given up on going to camp, right? But I checked with Tik and Sinead, and they told me to come, and I’d do what I could and learn from watching.

It was a fantastic experience. My main goal wasn’t to see what I could jump on cross country, or to really improve our dressage – it was to get safely to the end of camp and be able to drive myself home. The last clinic I’d attended had ended with my husband coming to my rescue and with me on crutches for two months. So, more than anything else, this time I wanted to avoid injury. With that in mind, I tried to make good choices about what I could safely do and still continue to learn things.

On the last night when Tik and Sinead gave out awards, I’m not embarrassed to admit that I cried when they announced that my award was the Elizabeth Gilbert award, which was based on the author, Elizabeth Gilbert’s 2009 Ted Talk, in which she explains that the genius isn’t inborn in people, but instead comes to the people that “show up every day and do the work.”

During camp, I’d felt a little like a wimp, I’d felt like a poser and I’d felt unprepared. Not only did they welcome me into a great camp experience, they recognized that although I’d had a tough year, I was still showing up to do the work. As I packed up to go home, Tik told me that he thought I’d be fine in taking Spider to the Makeover, but that I would have to do the work, or it would creep up on me before I was ready. He emphasized that the Makeover is a Big Show with a Big Atmosphere and that I needed to make sure we were both prepared. 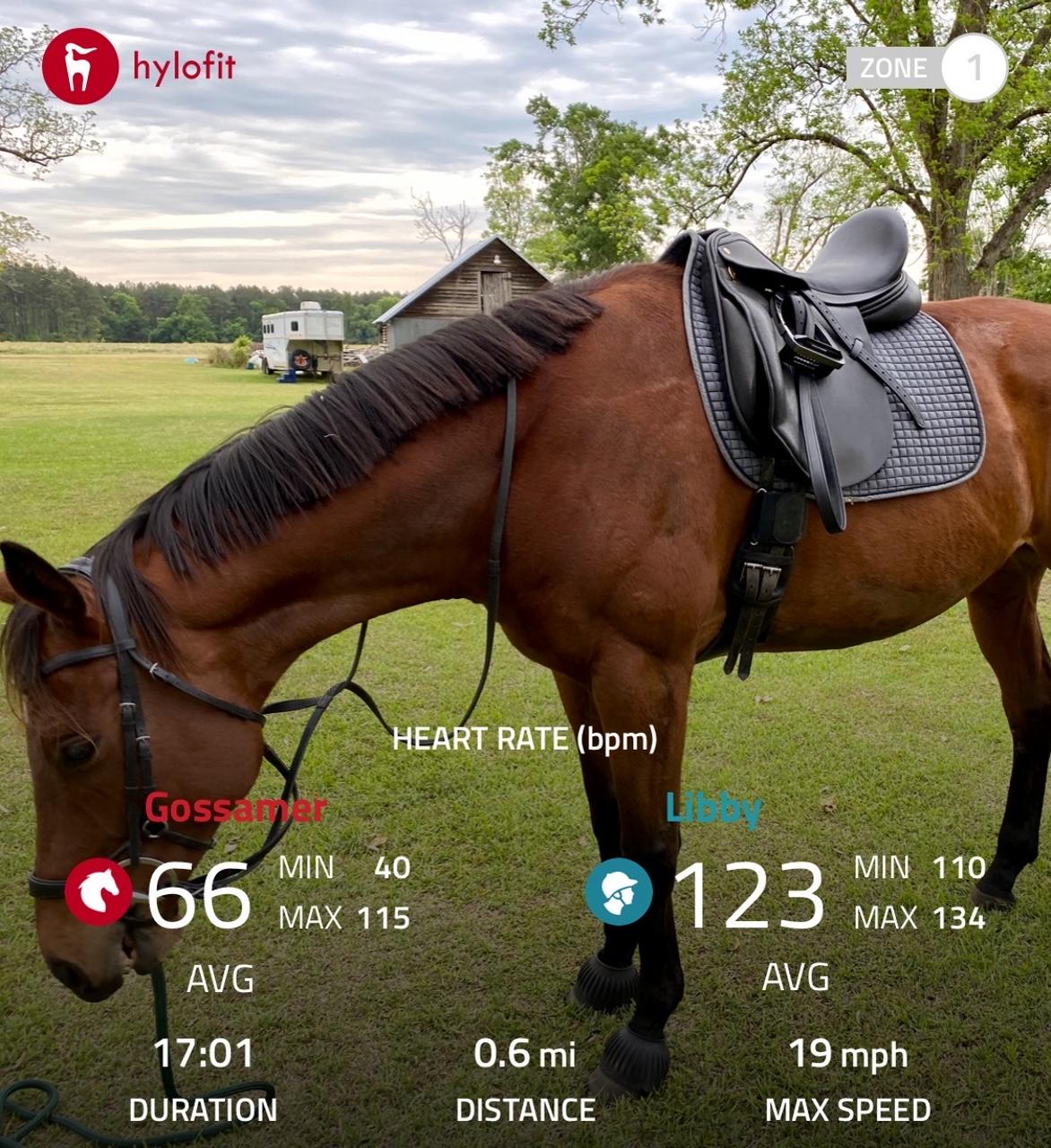 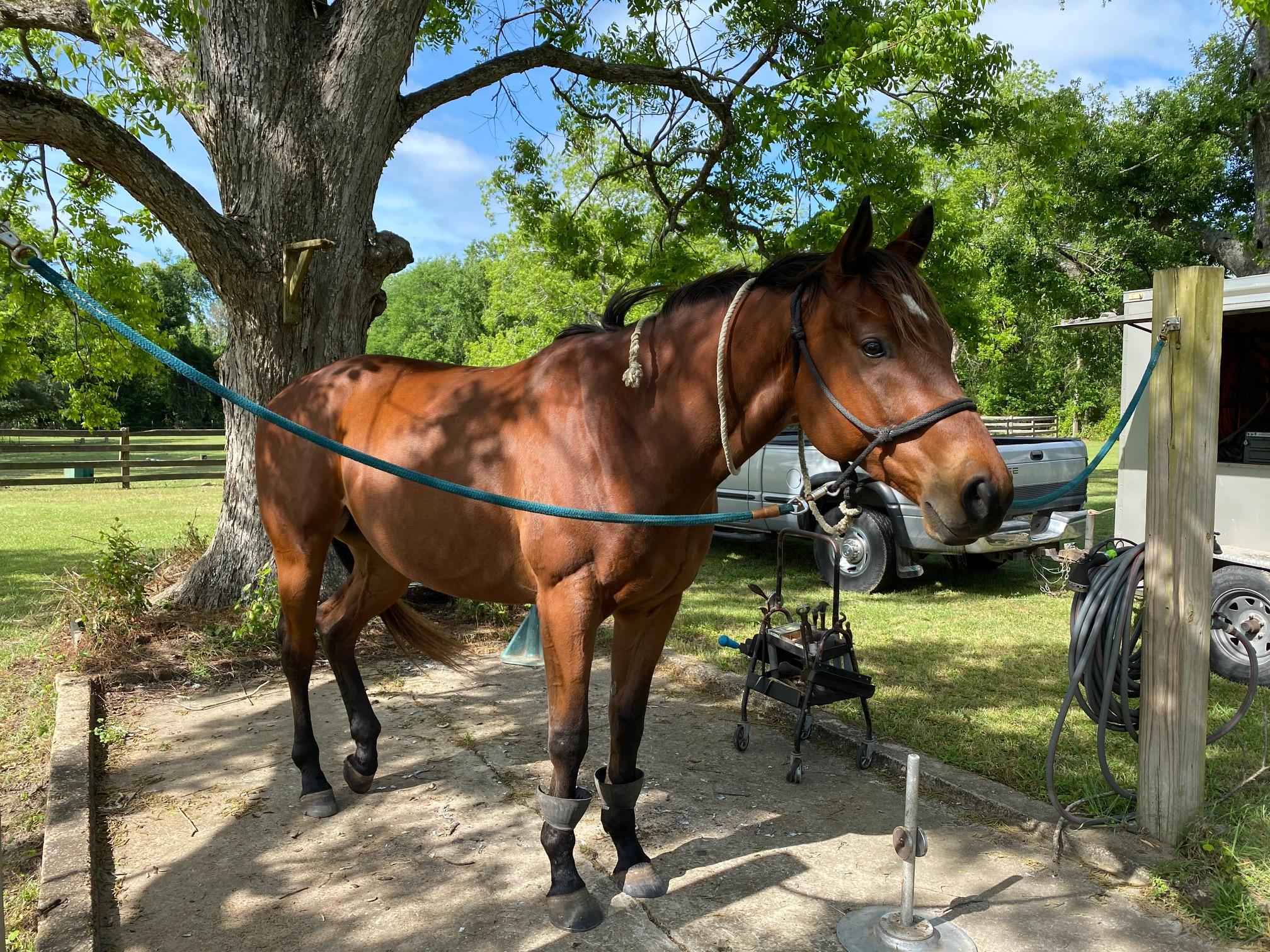 And, so, here we are. In the middle of a pandemic and under a stay at home order. I’m really fortunate that I live on the farm with my horses, and that I can work at home as easily as I can at my office. In fact, when they told us to begin telecommuting, I was totally thrilled. This was going to cut two hours of travel time out of my day, and I’d have so much time to get him going and to get my older mare fit and it would be wonderful.

Um, well, I do love being home and having more time in my day. But, Spider still hasn’t had his first post-track ride. I don’t need to be the first person to ride him post-track, as I’m not the fittest or the best balanced rider. I don’t know what he knows, because I’ve still been unable to trace down much of his history. He does seem to know how to lunge, so maybe he spent some time being ridden and trained on the farm? But, I haven’t done much in the way of formal training, even on the ground. I feel so lost and don’t know what I need to be doing. 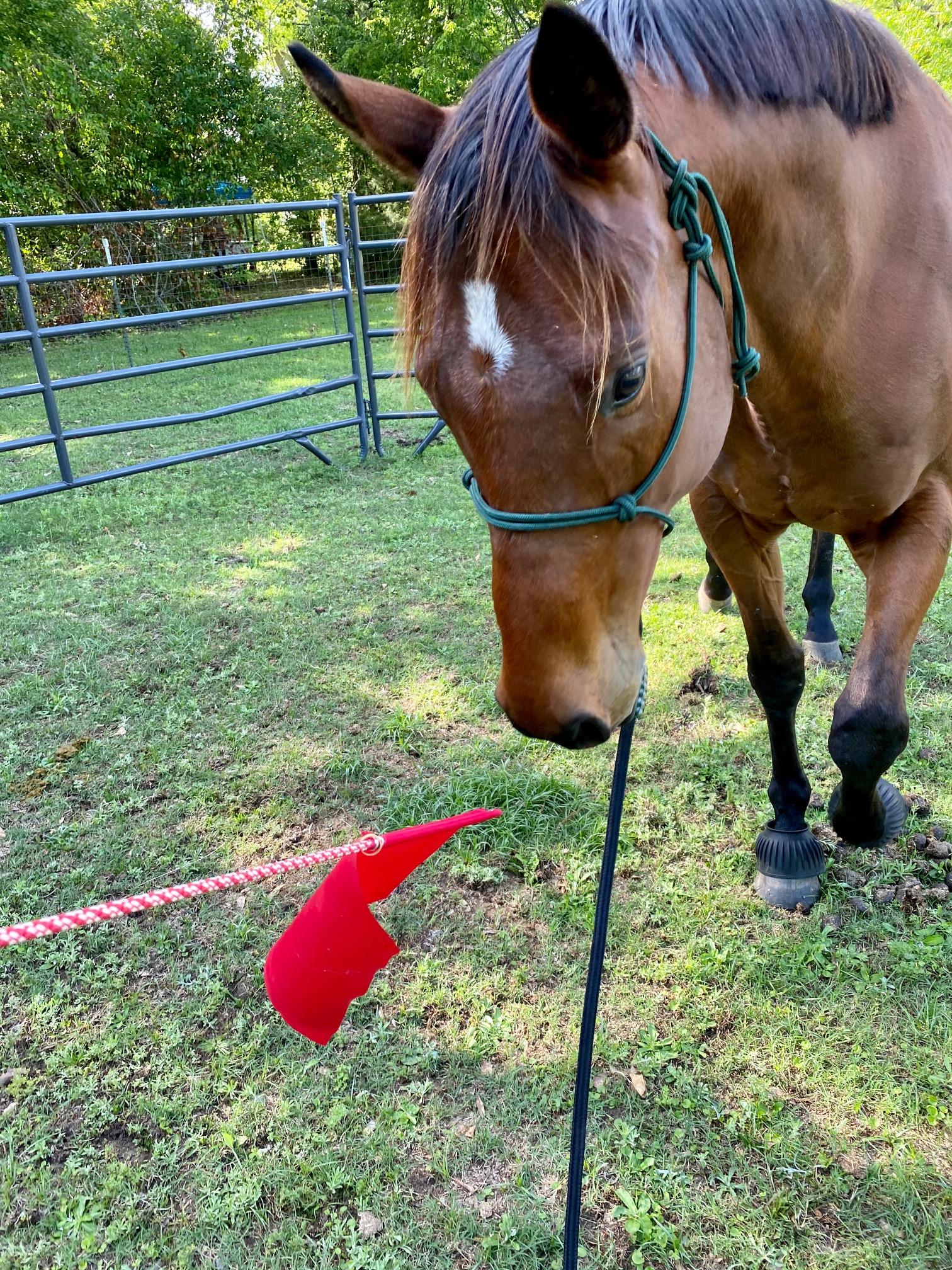 Spider with the flag. Photo by Libby Henderson. 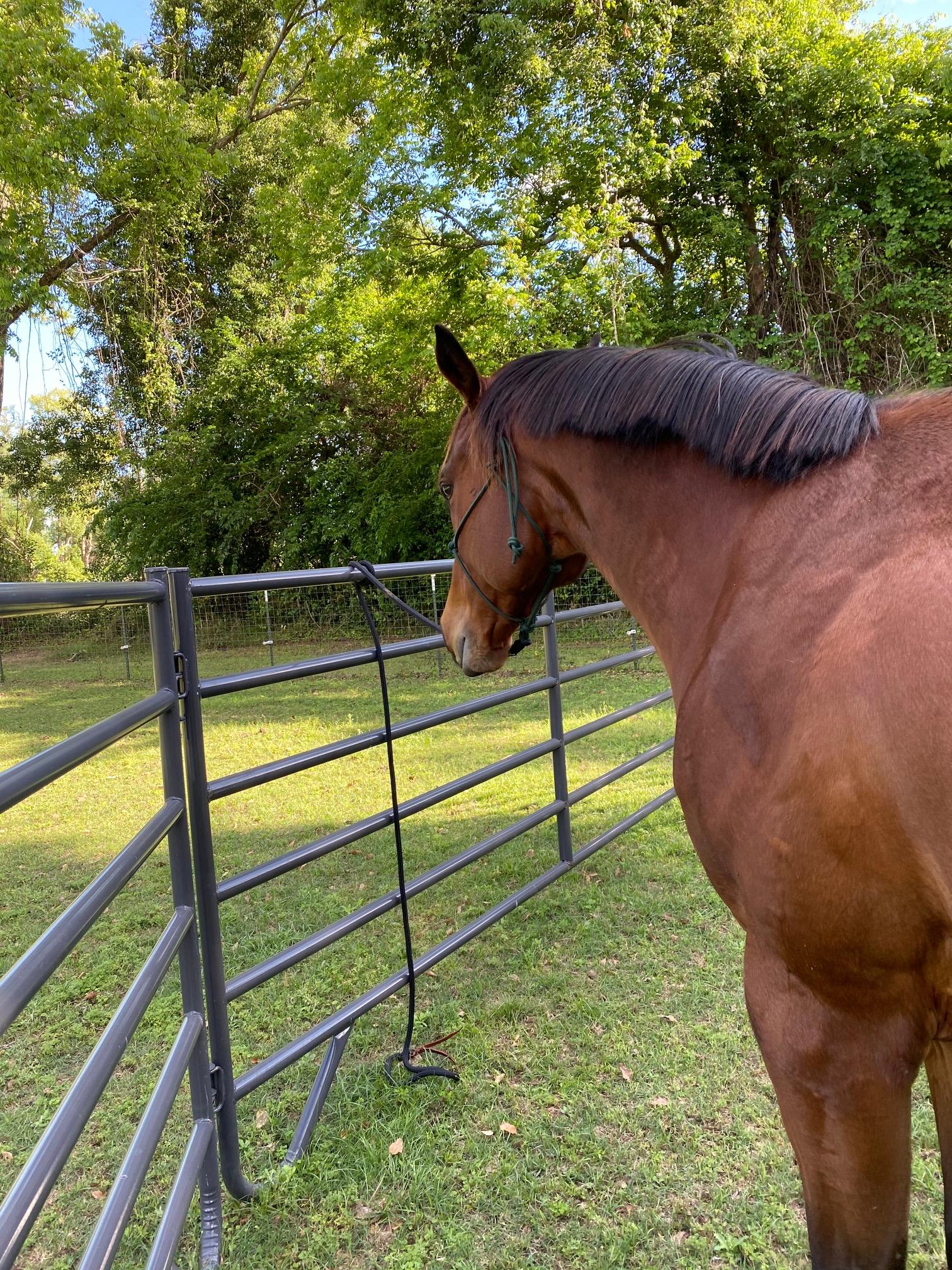 Spider practicing standing quietly in the round pen. Photo by Libby Henderson.

I know you are probably asking when am I ever going to tie all this back to my introduction about loving what happens? At first, I thought that the philosophy of figuring out how to love what happens and that of showing up and doing the work were diametrically opposed. But, as I mused on how badly I felt about not getting more done, I realized that I actually am showing up and doing the work, and loving whatever happens as we negotiate this situation. I’ve been able to start a fitness program and I’m getting stronger. I’ve spent a lot of time with Spider, in his pasture, and we’ve taken some in hand walks. In fact, rather than trying to work on him “joining up” with me, I’ve got to figure out how to get him out of my pocket. He comes when I call him, and he’s desperate for attention and a little bored. 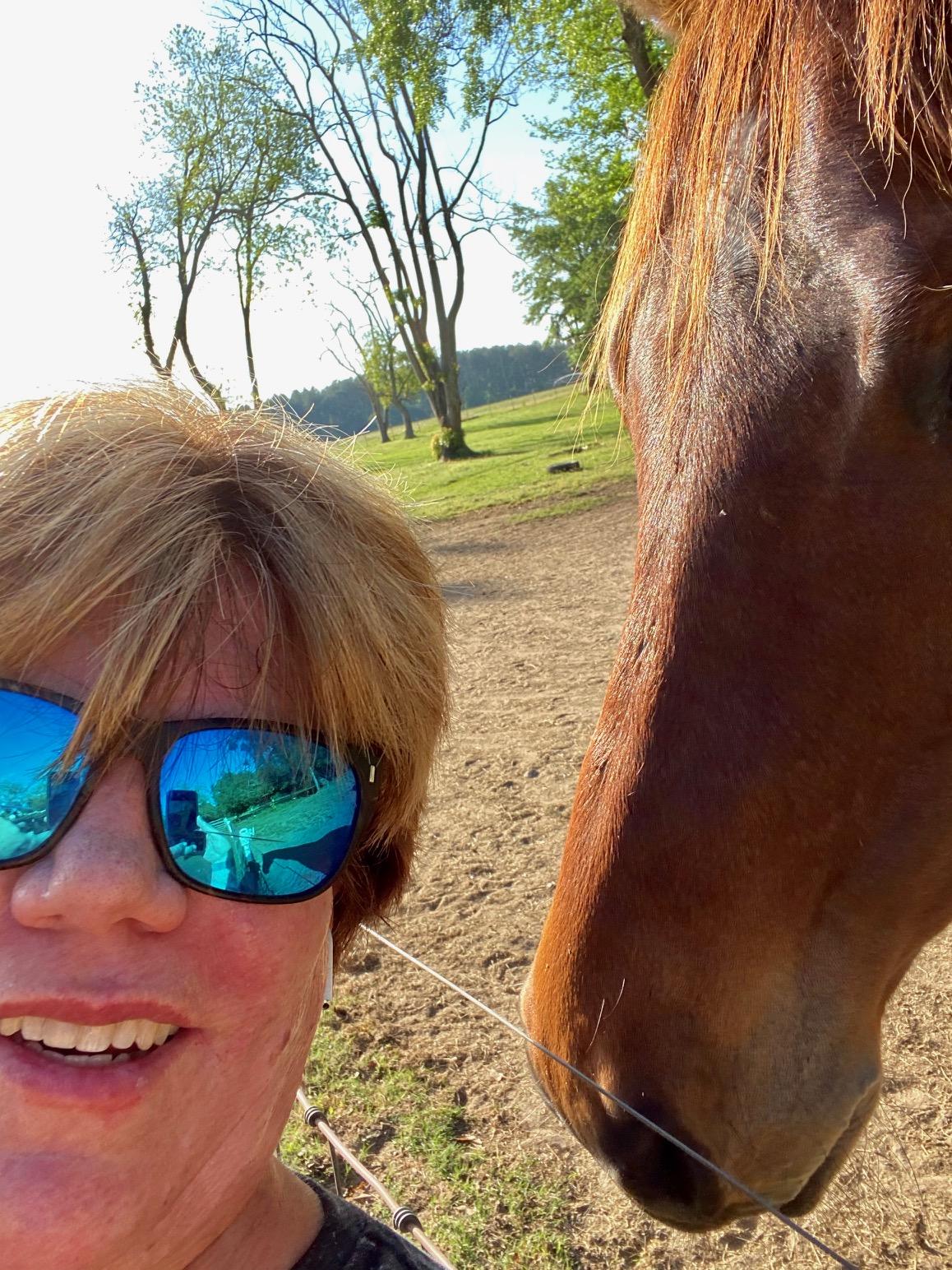 Selfie with Spider after my workout, where he watched and was judgy the entire time. Photo by Libby Henderson. 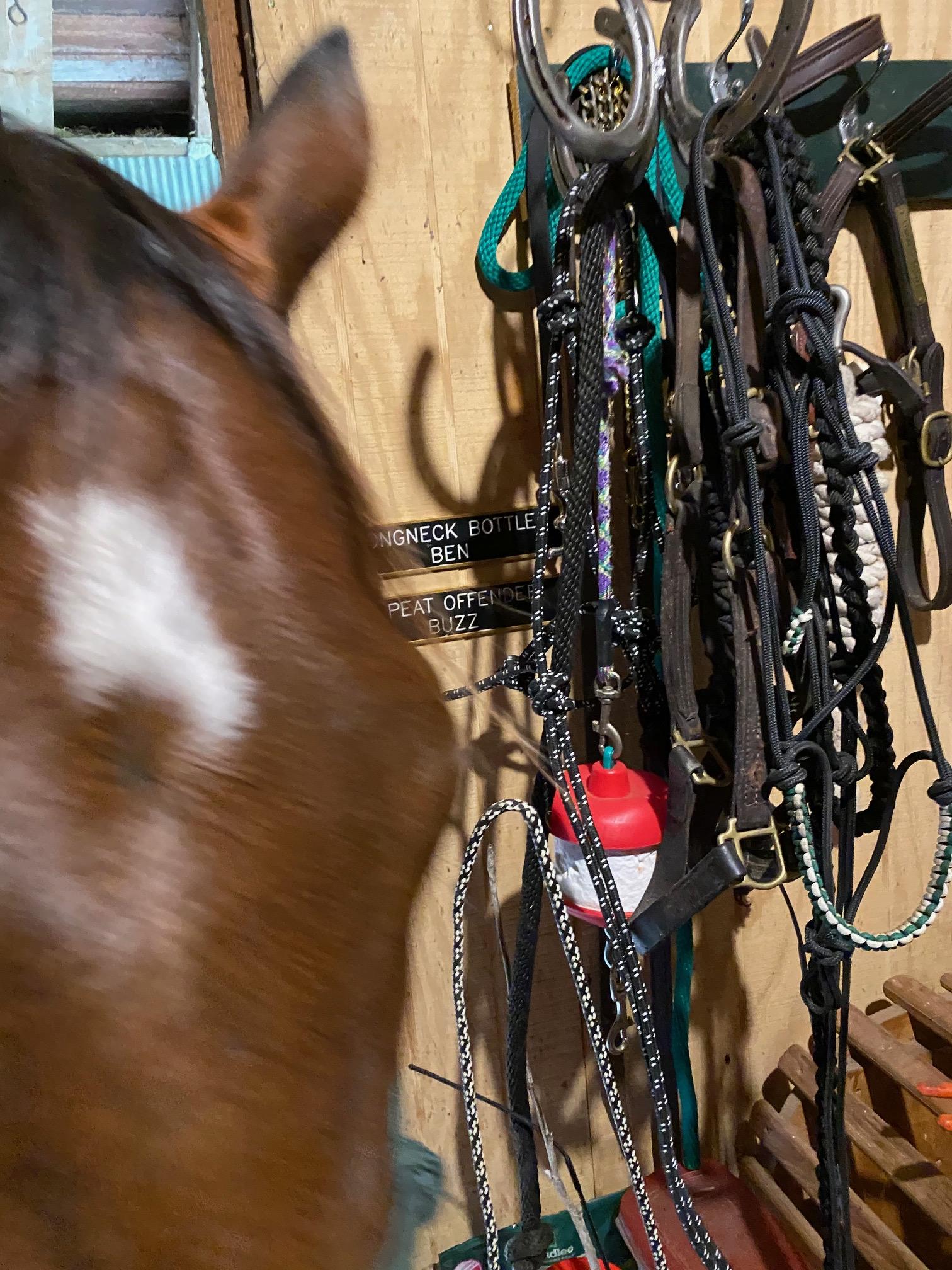 I’m hoping to set up some online groundwork lessons and have a friend that has offered to come out this week and start him under saddle, and that could change everything.

The RRP is considering alternative options if social distancing is still in place in October, but the Makeover is still on for now. Once we get to work, if he isn’t safe, or I can’t safely ride him, I’ll have no problem deciding that I shouldn’t go. But I really, really want to do this. I need to keep showing up and doing the work, and we will see what happens. And whatever happens, I think I can find a way to love it. Even if it isn’t what I originally planned.