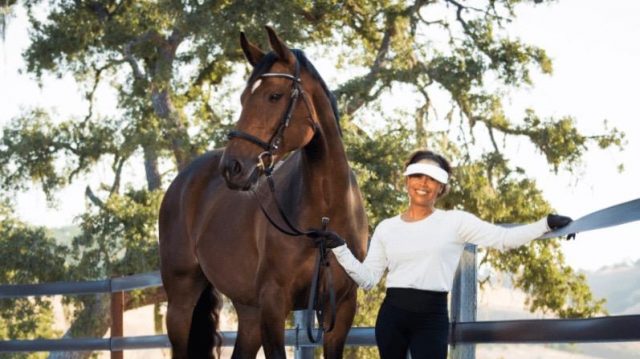 The 2020 Tom Bass Seminar on Diversity in Equestrian Sports will be held virtually on November 14 at 3:30pm EST.

The 2020 Tom Bass Seminar on Diversity in Equestrian Sports will be presented via video conference on Saturday afternoon, November 14 from 3:30 p.m. Eastern Time (20:30:00 UTC). The virtual meeting will examine issues relating to diversity in a) domestic and b) international arenas. To register for the seminar, click here.

Launched in 2019 as part of the 2nd Annual Day of the African Equestrian (DOTAE), the 2020 seminar takes place against a backdrop of social and political turmoil in the United States – in a year where the equestrian community has been forced to reckon with many of its own contradictions and activist riders of color including Brianna Noble and The Compton Cowboys have achieved international notice – in part through the use of horses in public protests inspired by the global Black Lives Matter (BLM) movement. A legendary American Saddlebred trainer, Tom Bass (1859 – 1934) was born enslaved in Columbia, Missouri. He played a prominent role both in the establishment of the American Royal Horse Show in Kansas City and in the promotion of the city of Mexico, Missouri as the ‘Saddle Horse Capital of the World.’ Highlights of his extraordinary career include championships at two World’s Fairs and more than 2,000 blue ribbons. For many years he was the only African-American permitted to compete at the American Royal. The Tom Bass bit, developed to give the rider control without causing pain to the horse, is still in use today. Topics to be explored during the 2020 Tom Bass Seminar on Diversity in Equestrian Sport include:

The seminar is presented by The AFRICAN CONNECTIONS Research and Education Fund, Inc. in association with SportsQuest International, LLC.

Public Relations assistance and technical support will be provided by the Tryon International Equestrian Center (TIEC). Additional support is provided by Eventing Nation and its sister publications, Jumper Nation and Horse Nation. A world-class destination for everything equine, the Tryon International Equestrian Center played host to the FEI World Equestrian Games (the official world championships of equestrian sport) in September 2018. Linkage to the video conference will be available from the following websites:

Organizers of the Tom Bass Seminar point out that horses are big business in the United States and in many regions of the world.

According to the American Horse Council, the horse industry contributes approximately $50 billion in direct economic impact to the U.S. economy, supporting almost one million jobs on a full-time basis1. According to statistics presented at the 2013 FEI Sports Forum — held at the International Institute for Management Development (IMD) in Lausanne, Switzerland — the horse industry has a €100 billion ($128.151 billion) annual economic impact within the European Union. The economic impact in the United Kingdom is estimated at being over £7 billion ($10.643 billion)2.

A major challenge for an Olympic sport that promotes itself as being truly global, “clean” and fully inclusive, is a conspicuous lack of people of color. People of color are underrepresented in the ranks of riders, owners, trainers, breeders, veterinarians, farriers, nutritionists, sponsors, spectators and members of the equestrian media. Conversely, there is an overrepresentation as grooms, nannies, hot walkers and stall muckers.

To remedy this situation, equestrian sports promoters and organizations representing all facets of the industry are being urged to understand that it is good business to spend advertising dollars in minority communities. “Developing a more diverse fan base involves supporting equestrian sport training programs in those communities and working in concert with ethnic media outlets in educating members of the public about horse sport. Cultivating cooperative alliances with minority owned businesses will yield tangible benefits,” wrote seminar moderator Melvin Cox in a 2017 editorial published by HorseNation.com.

Mr. Cox, a Lecturer at the University of California, Santa Cruz is the Founder and Managing Director of SportsQuest International, LLC – a media production and consulting business focused on the equestrian industry. Mr. Cox foresees an explosion of interest in equestrian sports throughout the United States and in other countries — reaching across all socioeconomic strata. But, he warns, “the outreach to new market segments will have to be done correctly — from a position of true humility and respect, and not from one of blatant arrogance.”

“Much as motorsport has successfully built a loyal following among fans with little if any opportunity (or desire) to own a Formula One racing car,” wrote Cox, “the horse sports can be proactively marketed to all demographics. Just as Major League Baseball attracts millions who will never hit a curveball, the equestrian disciplines can find deeply loyal and very knowledgeable aficionados among persons representing all manner of humanity.”

The solution proposed by seminar organizers targets a more equitable distribution of the scholarships, internships, jobs, contracts, investment opportunities and profits associated with the global horse business. A key component of this effort is to increase awareness among young people in cities, suburbs and rural communities regarding the opportunities for successful and fulfilling careers available in the horse business. Cox believes that America’s Historically Black Colleges and Universities (HBCUs) and her Hispanic Serving Institutions (HSIs) represent an untapped “gold mine” of talent and opportunity.

About the AFRICAN CONNECTIONS Research and Education Fund, Inc:
A nonprofit 501(c) organization, ACREF was created in direct response to the numerous distortions, halftruths and omissions seen almost daily in the popular media regarding Africa, her people and the African Diaspora.

The principal mission of the organization is to illuminate, educate and to provide a balanced viewpoint that celebrates genuine achievement and service to humanity.