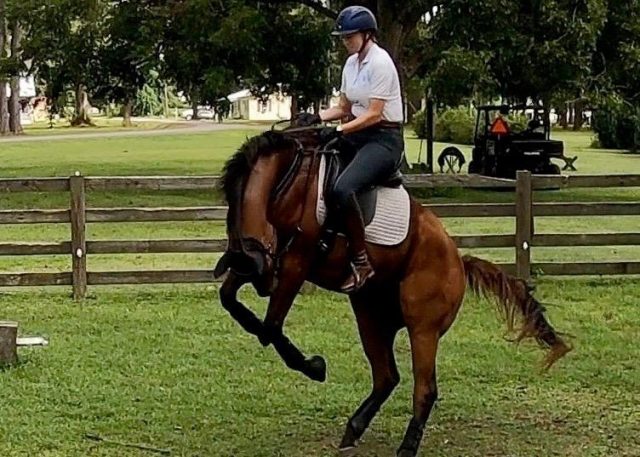 Riding and training horses is full of ups and downs: we can be pleasantly surprised and then we also can be reminded that horses have temper tantrums, too.

Following the announcement that the Retired Racehorse Project‘s 2020 Thoroughbred Makeover and National Symposium, presented by Thoroughbred Charities of America, will be postponed to 2021, competitors have been working to decide what comes next for them and their mounts. Today, blogger Libby Henderson discusses tantrums and triumphs — or how they got ready for their first show the week of Hurricane Sally and find that the baby OTTB can throw a huge temper tantrum.

Over the last few weeks, I’ve been working on riding Spider (JC name Gossamer) myself (with still having lots of help from his Auntie Kristina!), and taking him on field trips. On the first ride away from home where I was able to mount at the mounting block and ride away without assistance, I was absolutely delighted. I felt a little silly being so excited about such a small thing, but posted a video of the moment anyway. A trusted friend, who is a respected professional, commented on my FB post about it and said: “It’s never easy to just ‘get on.’ The day that it is, is the day that we stop respecting the miracle that occurs every time that they let us ride them. To do it without fear is an amazing feeling, but we must respect it daily. A fine balance.” [1] And, she’s right. 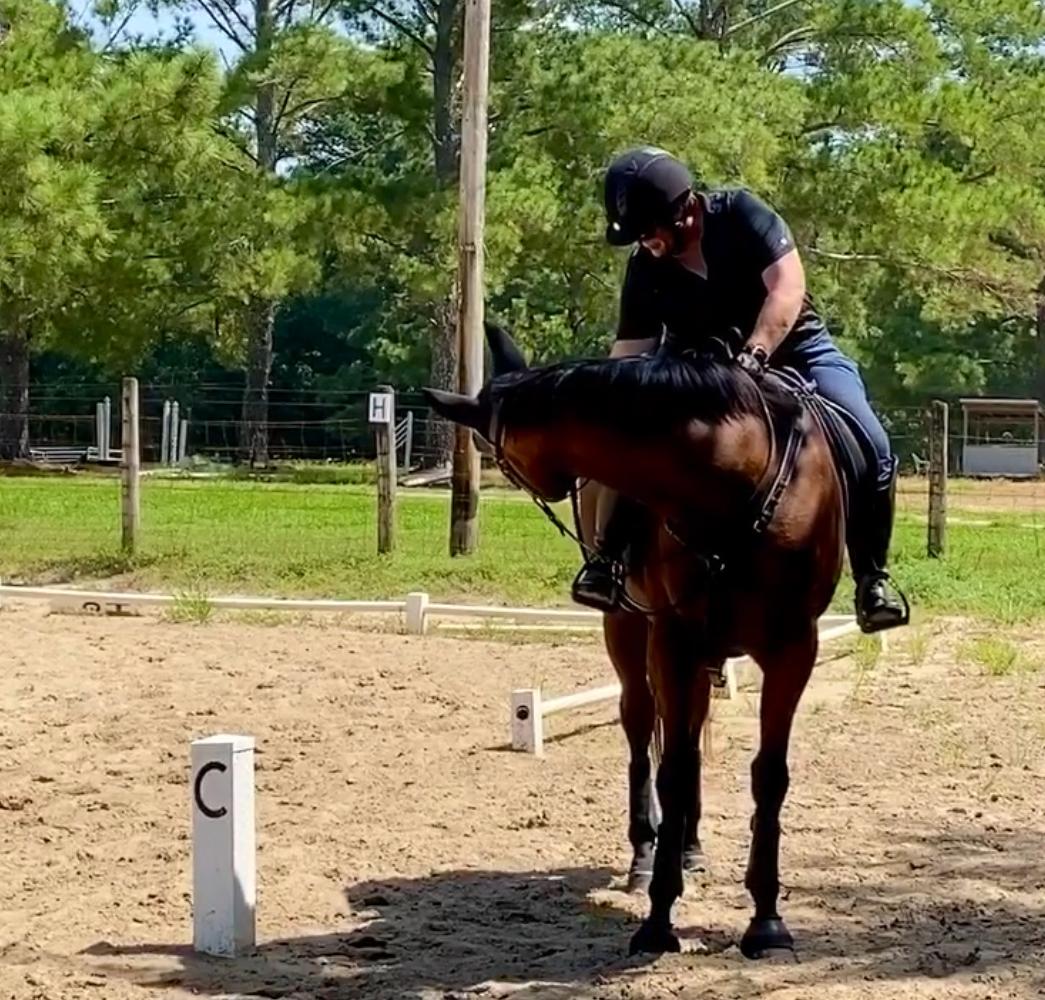 Giving Spider a cookie for standing quietly at the mounting block. Photo courtesy of Libby Henderson.

I wrote last month about being suggestible and influenced by what I see, hear, watch and read on social media. And how, while my pocketbook would probably prefer that I take fewer suggestions about shopping to heart, there is so much content available to provide inspiration and motivation, as well as entertainment. I was pondering the post above and I came across a post on Instagram by Natalie at @insidetrackeventing. If you aren’t following her, you should be. She discussed the amazing trust that our horses put in us every time they come to us in the field, step inside a horse trailer, go to an unusual location and dance in a box, or jump a bunch of obstacles.

We have the benefit of knowing what’s coming. After all, we make the plans, and the horses are just along for the ride. Their job is to figure out what we want, and to give us the right answer. The fact that they do this at all really is a miracle.

Our most recent outing was this past weekend. Spider hopped in the trailer, wearing his shipping boots for only the second time ever, and I loaded up (by myself!!) and off we went. When we arrived, I was running late (anyone who knows me knows this is my standard operating procedure – I work really hard to be on time, but I’ve reached my fifth decade now, and still don’t have it figured out). So, I hopped on without lungeing him first and rode off. We rode in a ring where he’d never been before, and rode around jumps and obstacles. We conquered (with assistance!) the terrifying puddle of mud, and eventually trotted through and played in it happily. (He got mud ALL OVER himself. In places I didn’t think it was possible to get dirt!) We trotted poles, and worked on good balance and having nice transitions. I was so proud of him and thought “Well, we are really making progress now!” 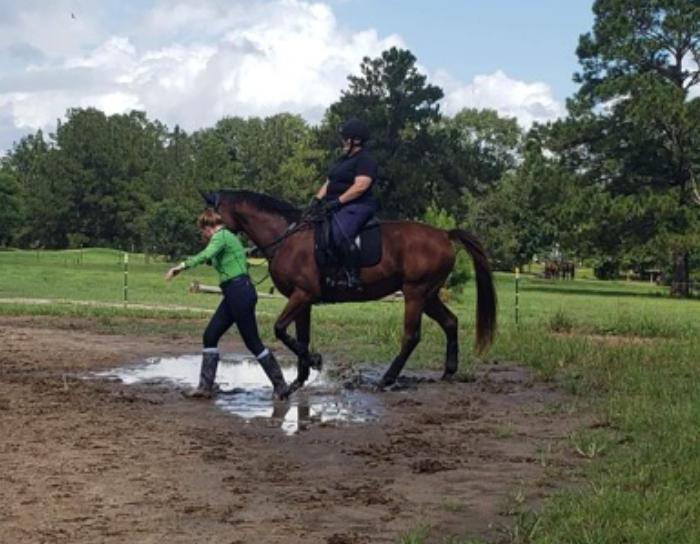 Kristina Littlejohn helping us through the scary puddle. Photo by Sarah Mills.

You can see what’s coming, right? Apparently, he doesn’t read my journal, my social media posts, or even this blog.

The day after our big boy excursion, Kristina came out to the farm so we could take the horses on a nice, long hack. He’d been so good the day before, we didn’t even lunge him, and I had happy (secret) thoughts of seeing if we could switch horses, and I could try hacking him out. Ha! That was NOT in his plan.

He was standoffish when I went to bring him in, which was a little odd, and fussy and naughty as I groomed and tacked him up. I handed him off to Kristina and went to finish tacking up my mare, and when we came out to the arena, it appeared she was sitting on a keg of dynamite. She worked him and he began to quiet down – a little. She decided a hack was maybe not a good idea, and headed over to drop the crop she was carrying. Now, WHOA is usually his favorite word, and stop is his favorite gait. The crop is usually necessary, even if we never use it, just to keep him moving forward.

Until it wasn’t. And then, he wouldn’t let her get up close to the mounting block to drop it. He refused to go where she asked him to, and she insisted. The “discussion” became rather heated, with him “expressing himself” quite strongly. Kristina rode it out with fabulous stickability and a great seat, and insisted he go forward. Once she got him “unstuck” and they went back to work, his attitude changed completely. 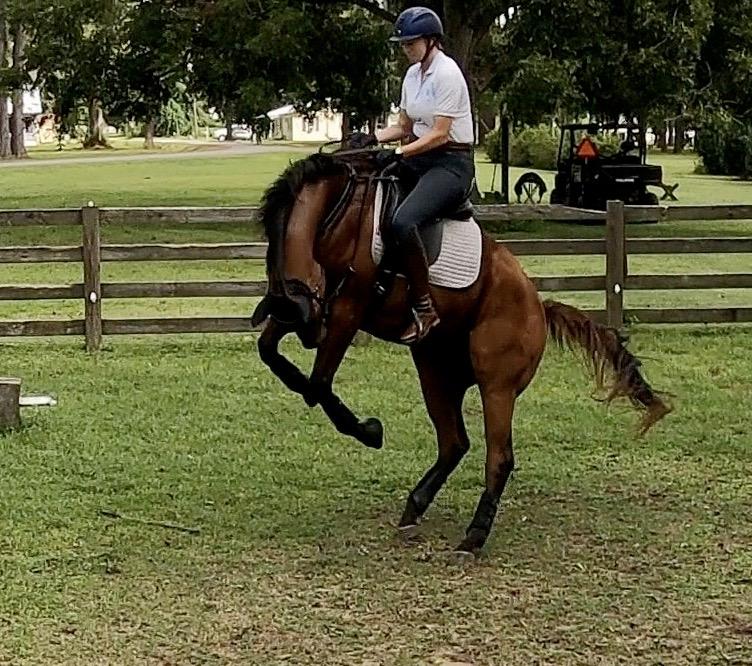 Spider tries out for rodeo pony. Kristina does a great job of staying on! Photo by Libby Henderson. 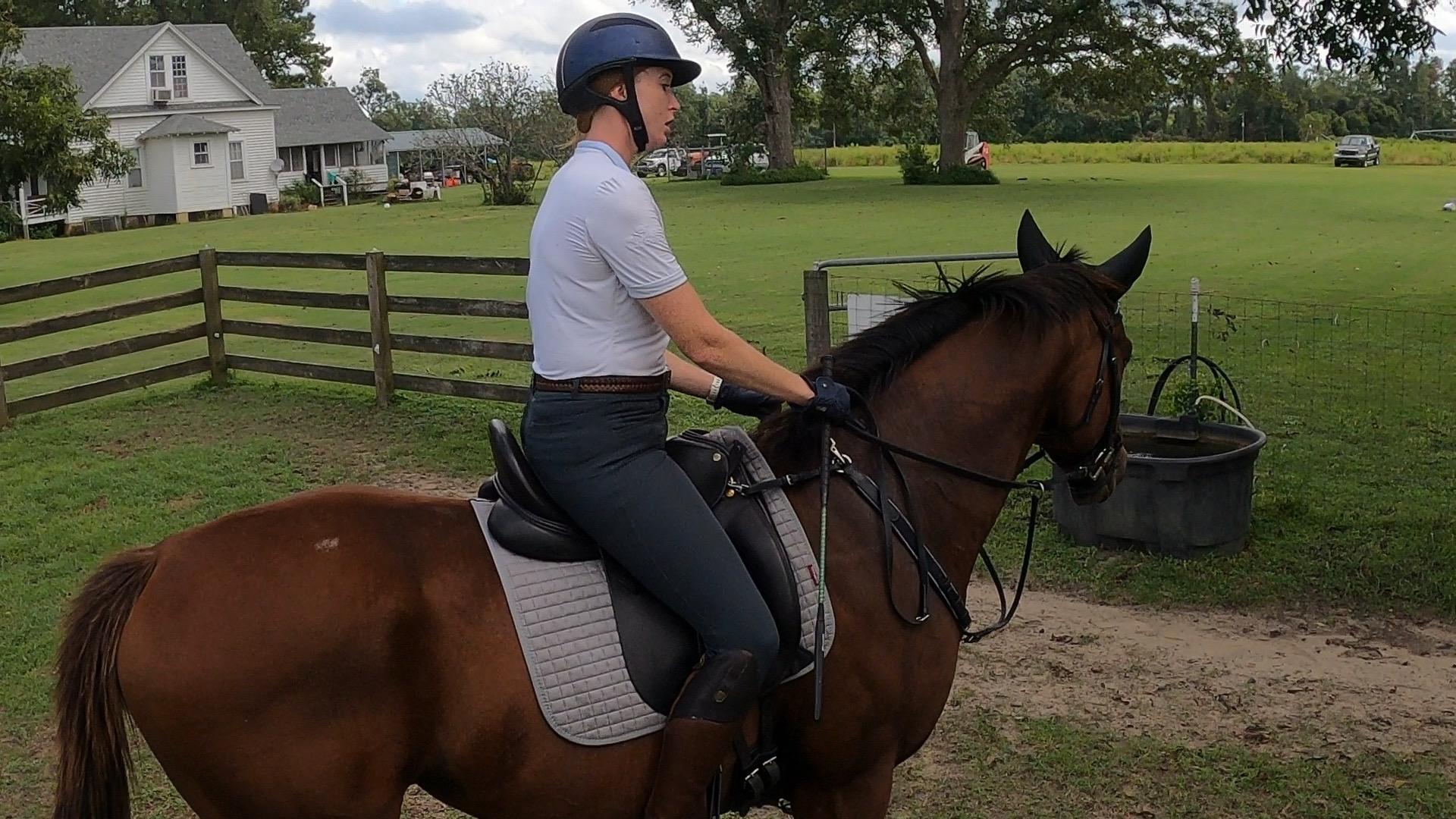 Spider and Aunt Kristina have a Serious Discussion. Photo by Libby Henderson.

We decided to hack out after all, and he was a Very Good Boy. We were able to trot side by side, and they were both fine. When we got to an open, groomed area, she was able to canter him in both directions in the big field, and he even rewarded her patience with a flying change or two. The video is filled with joyous praise for how good he was. 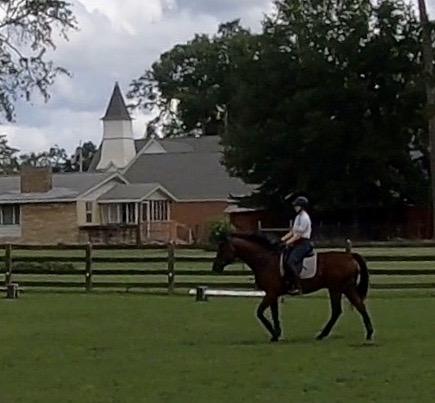 Spider decides that trotting nicely in the field is a Good Idea. Photo by Libby Henderson, 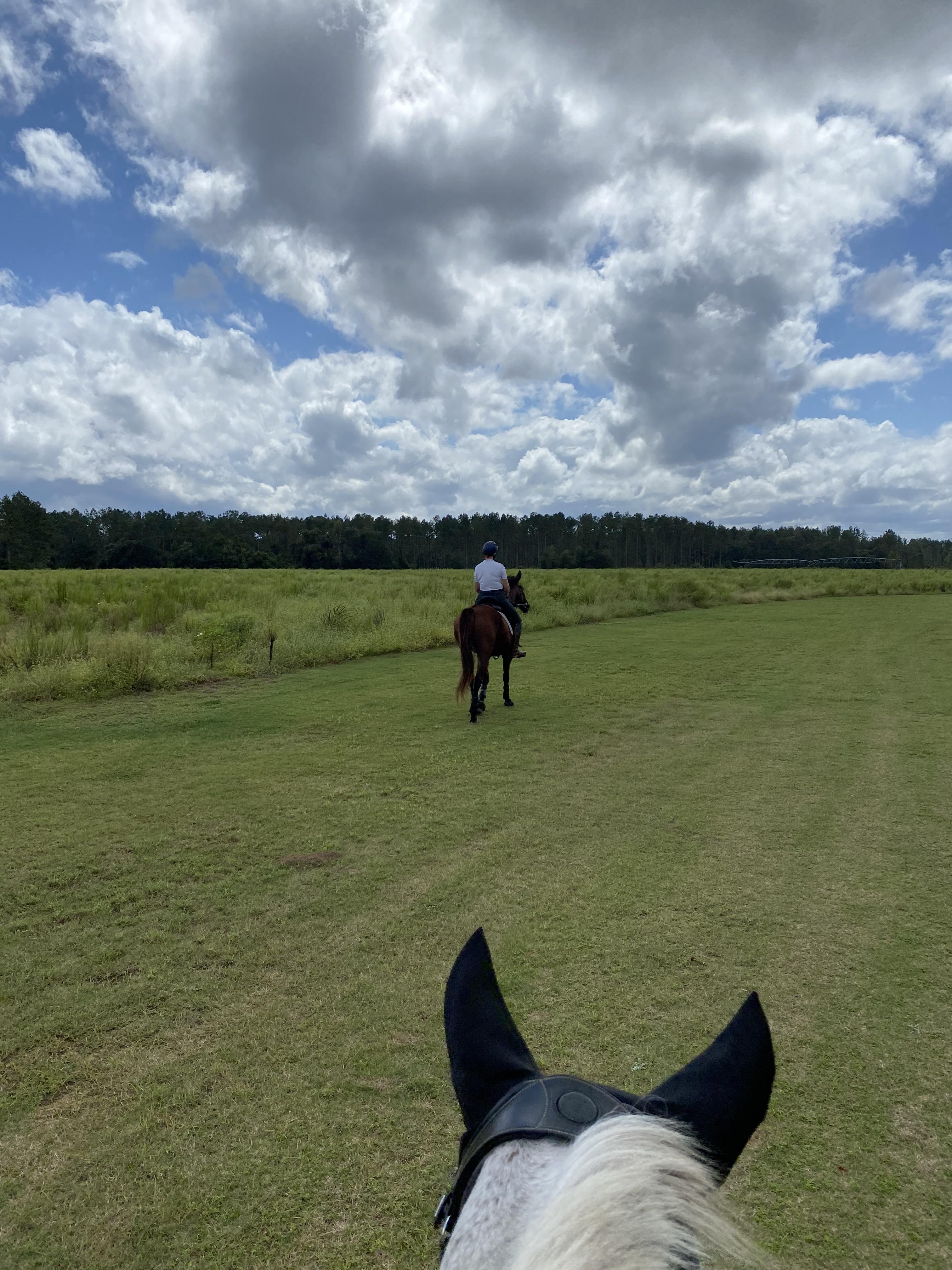 Setting out on a hack, seen through Razzy’s ears. Photo by Libby Henderson.

The comparison between Saturday and Sunday was pretty stark, and I’ve spent a lot of time wondering what caused him to show out so badly on Sunday, and was there anything I could have done to have prevented it? It turned out so well, that maybe it was just time for him to show some will and be pushed through it? Did I miss something? After hours of musing, I realized that while we absolutely should spend a lot more time appreciating the trust they have in us, perhaps that isn’t enough. 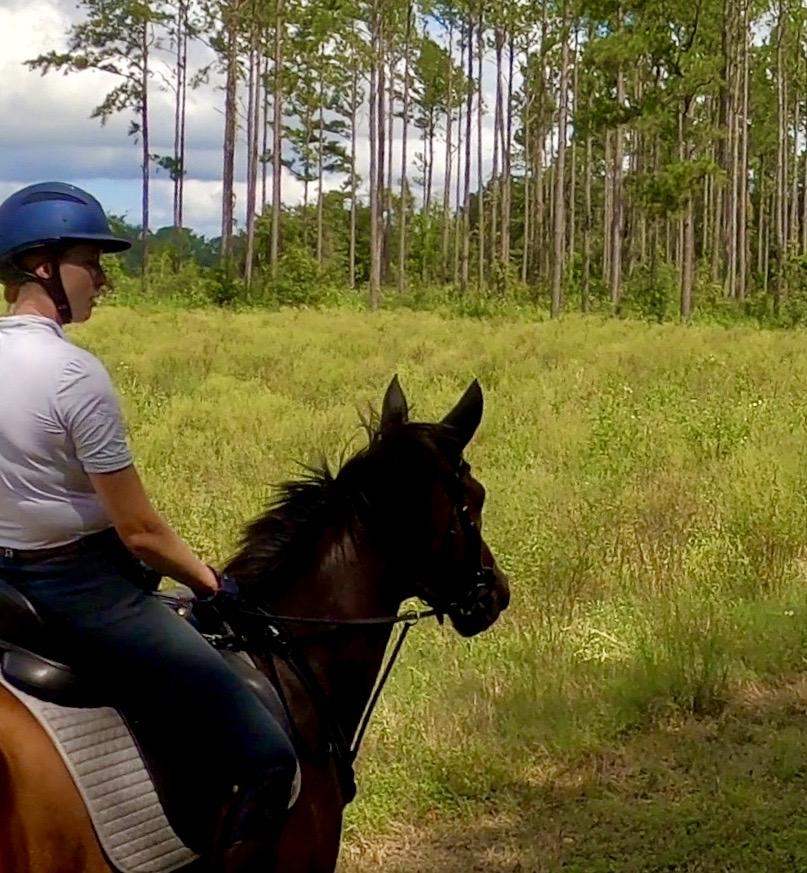 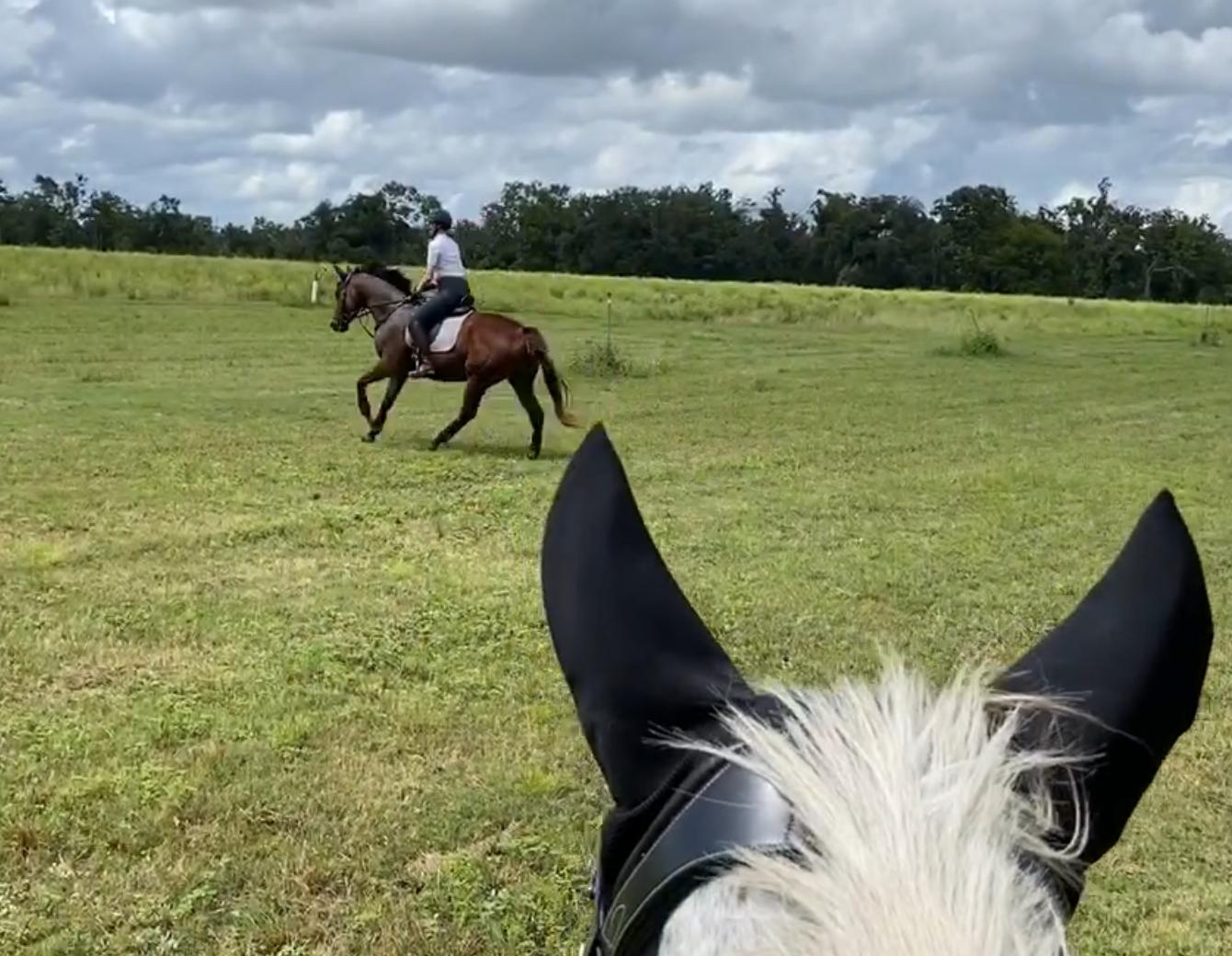 Great canter out in the field. Photo by Libby Henderson.

I don’t spend enough time listening to them. It is easy to attribute human thoughts and plans to horses. We absolutely shouldn’t do that. The pre-frontal cortex in humans, where all the forward thinking and planning happens (or doesn’t, if you have ADHD, like me, and have a pre-frontal cortex that has to be jolted awake!) is quite developed and important.

The frontal lobe in horses is small. They don’t lie, scheme or plan to ruin your day. Horses are more clever than they are sometimes given credit for, and I love to watch them learn something new. They can puzzle out things, and I’ve seen some horses that appear to have processed a lesson in down time and are improved at it the next time you ask. Essentially, though, they have good days and bad days, just like people, but do not typically plan to be obstinate.

So, our job is to listen to them. To pay attention to their body language, to check to see what might hurt, or whether they are tired, or if they are feeling insecure, to give them a well defined task and boundaries, so they can easily make the right choice. I need to work on this. I realized that before I could ride Spider, and he was on pasture rest, I spent a lot more time just hanging out with him and watching and interacting with him. Now, when I go in his field, it is to feed him (he always approves of that!) or to get him out for work. I think I will go back to spending some non-demanding time with him, and just listening. That’s good for our souls too.

[1] Thanks to Jennifer Holling, whose wisdom has helped me more than she ever could know.