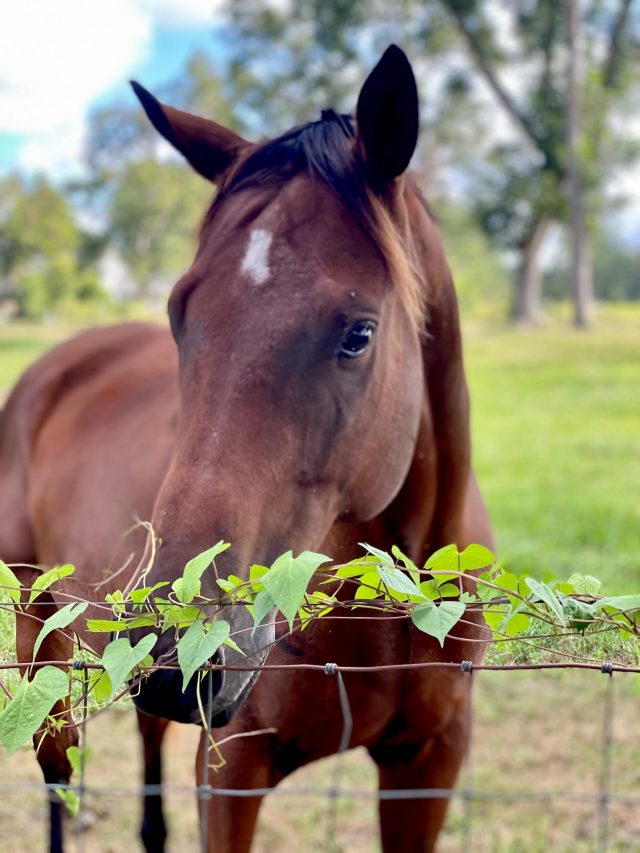 August 20, 2020DeAnn SloanContributor#RETIRED RACEHORSE PROJECTComments Off on Shopping for the Rider I Want to Be: Libby & Spider

Dress for the job you want… Or maybe shop for the rider you want to be.

Following the announcement that the Retired Racehorse Project‘s 2020 Thoroughbred Makeover and National Symposium, presented by Thoroughbred Charities of America, will be postponed to 2021, competitors have been working to decide what comes next for them and their mounts. Today, blogger Libby Henderson discusses her approach to becoming the type of rider she wants to be.

I’m super suggestible. I know this about myself. This quality governed my return to horses 25 years ago. I read and loved Rita Mae Brown’s Riding Shotgun, and suddenly, I knew what was missing from my life – horses. I’d been a horse addled girl growing up, reading all the Margurite Henry I could get my hands on, and riding my pony around the small town my grandparents lived in. When boys became cooler than ponies, I got distracted and left the horse world behind, I thought. Prior to starting law school, though, my big treat was to go to Ocala and tour Thoroughbred farms. Apparently, I still had a daydream about running off to work with horses if the law school thing didn’t pan out.

Three years after graduation, when practicing law turned out to be not as much fun as I’d hoped, I picked up RMB’s book about riding a powerful Thoroughbred hunter back in time. I was entranced, and wanted to learn everything about foxhunting. Instead, I got a cow pony. Which was then followed by a leggy bay who hated going anywhere in a group, and despised dogs. Clearly, life as a member at a hunt wasn’t going to pan out. Instead, I discovered Eventing. And I’ve been trying to be a “real” Event Rider ever since.

I haven’t schooled cross country since 2008, but I still have not given up, or accepted that maybe I’m “just” a dressage rider. During our stay at home lockdown this year, I’ve been watching a lot of YouTube equestrian vlogs, primarily Eventers in the UK.** Many equestrian vloggers are sponsored by tack and equestrian lifestyle companies. I’m the perfect example of why companies sponsor riders with large social media platforms. It doesn’t take much to make me want ALL THE THINGS,

I have an entire wish list of things to buy now to make me a “real eventer.” From skull caps, to more saddle pads, to cross country boots, to those super cool cross country shirts that UK eventers wear. . . so many things that will transform me. (Never mind that I have a full to overflowing tack room already.) 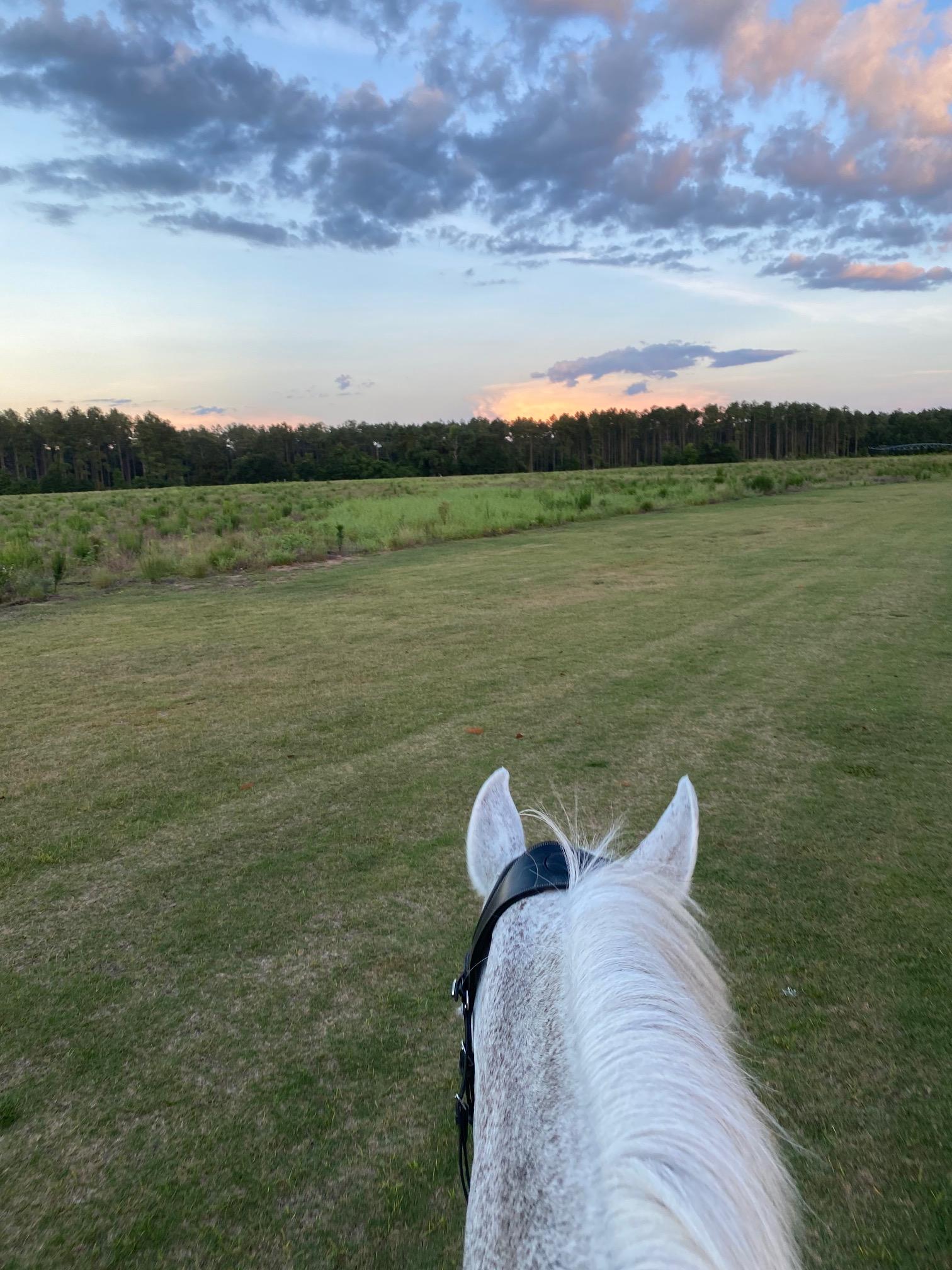 My Mare Razzy on a sunset ride so we can fit it into the day. Photo by Libby Henderson. 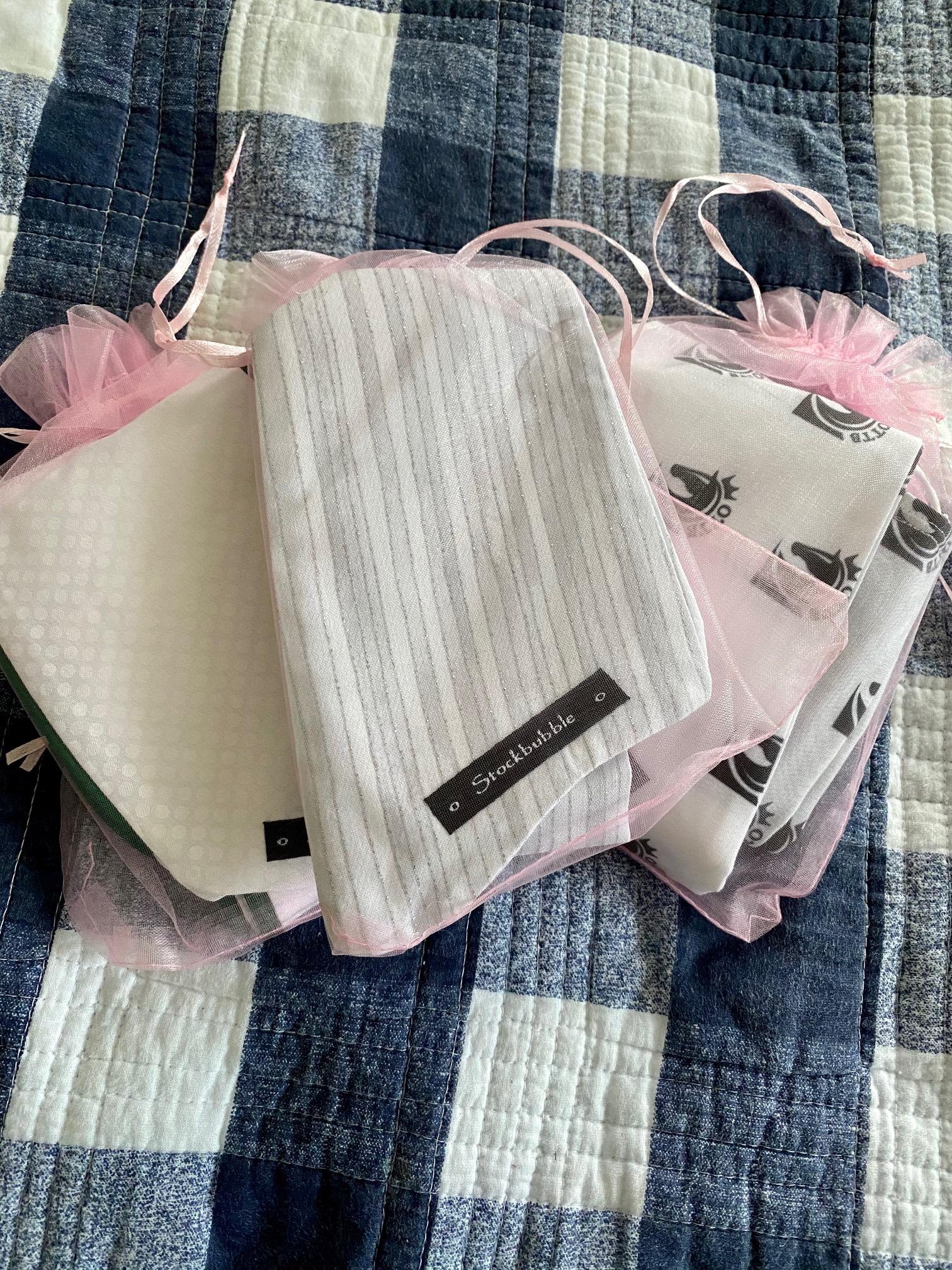 New stock ties ordered from Stockbubble on Etsy – the kind you have to tie! Photo by Libby Henderson.

Except, will it? I’ve set some goals – I can’t have an awesome skull cap helmet until I’m riding regularly enough to justify the expense, so that should provide motivation. Except I find myself swimming in self-doubt as much as I am motivated. Do I deserve to have the all the cool garb of a “real eventer?” Won’t people laugh at a sub BN rider having all the gear? Do I have any business dressing or tacking up as a “real eventer?” 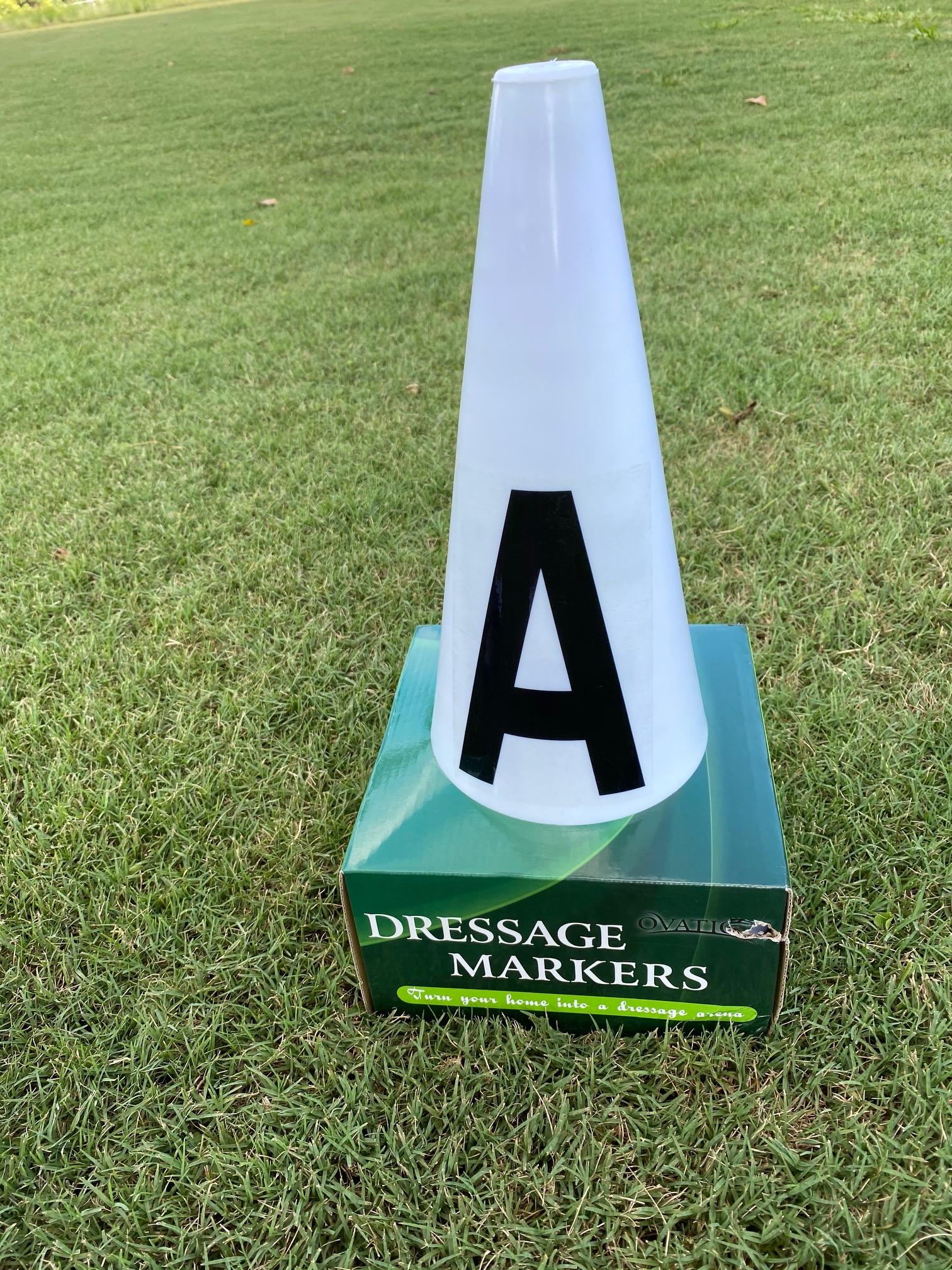 Essentially, I’m shaming myself for my own goals. I don’t even need the help of the peanut gallery to feel badly about this middle-aged fat lady trying to ride this baby horse and return to eventing. 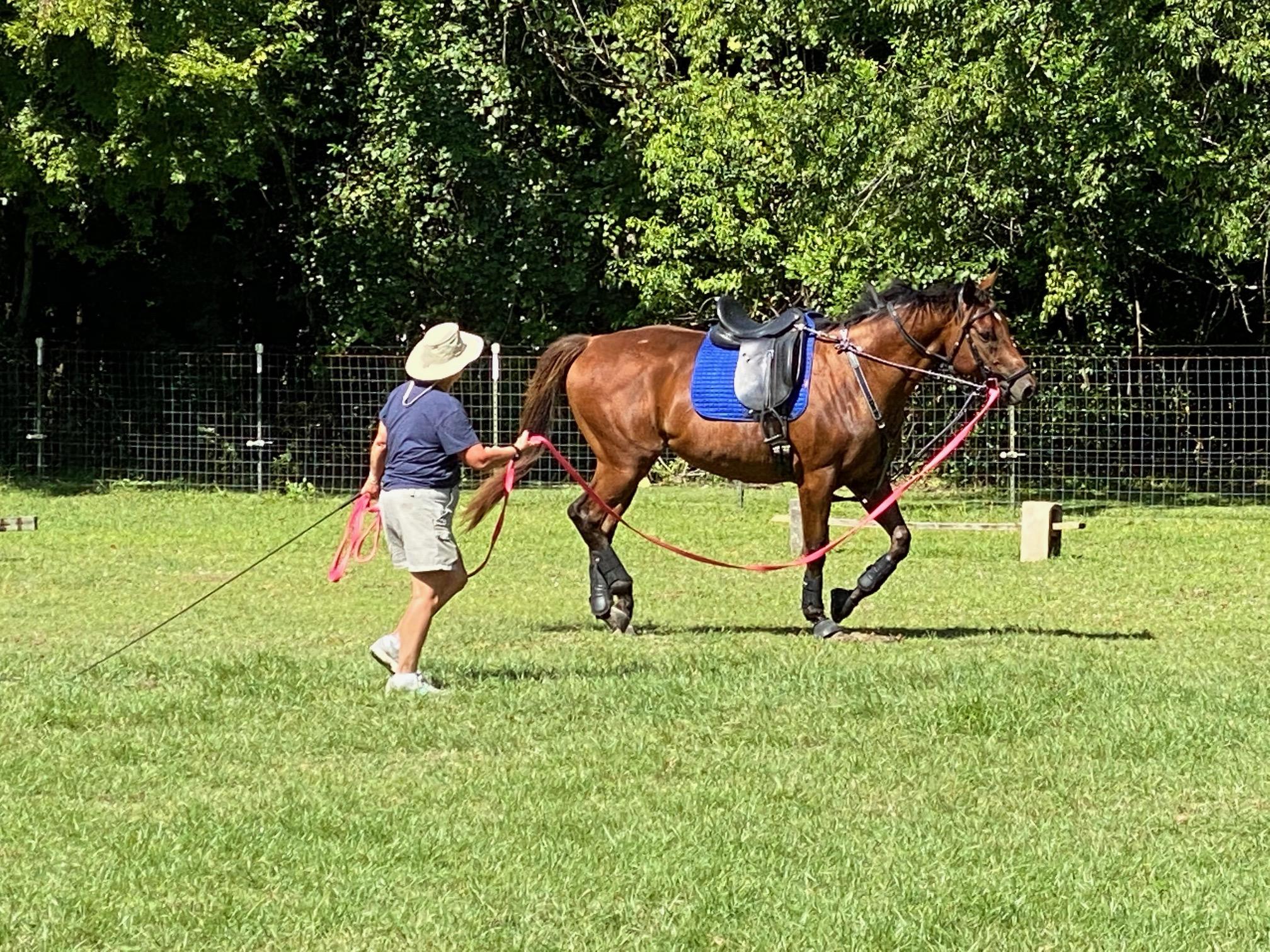 Spider with my trainer, Kelley Norred, learning to behave on the lunge line. Photo by Libby Henderson. 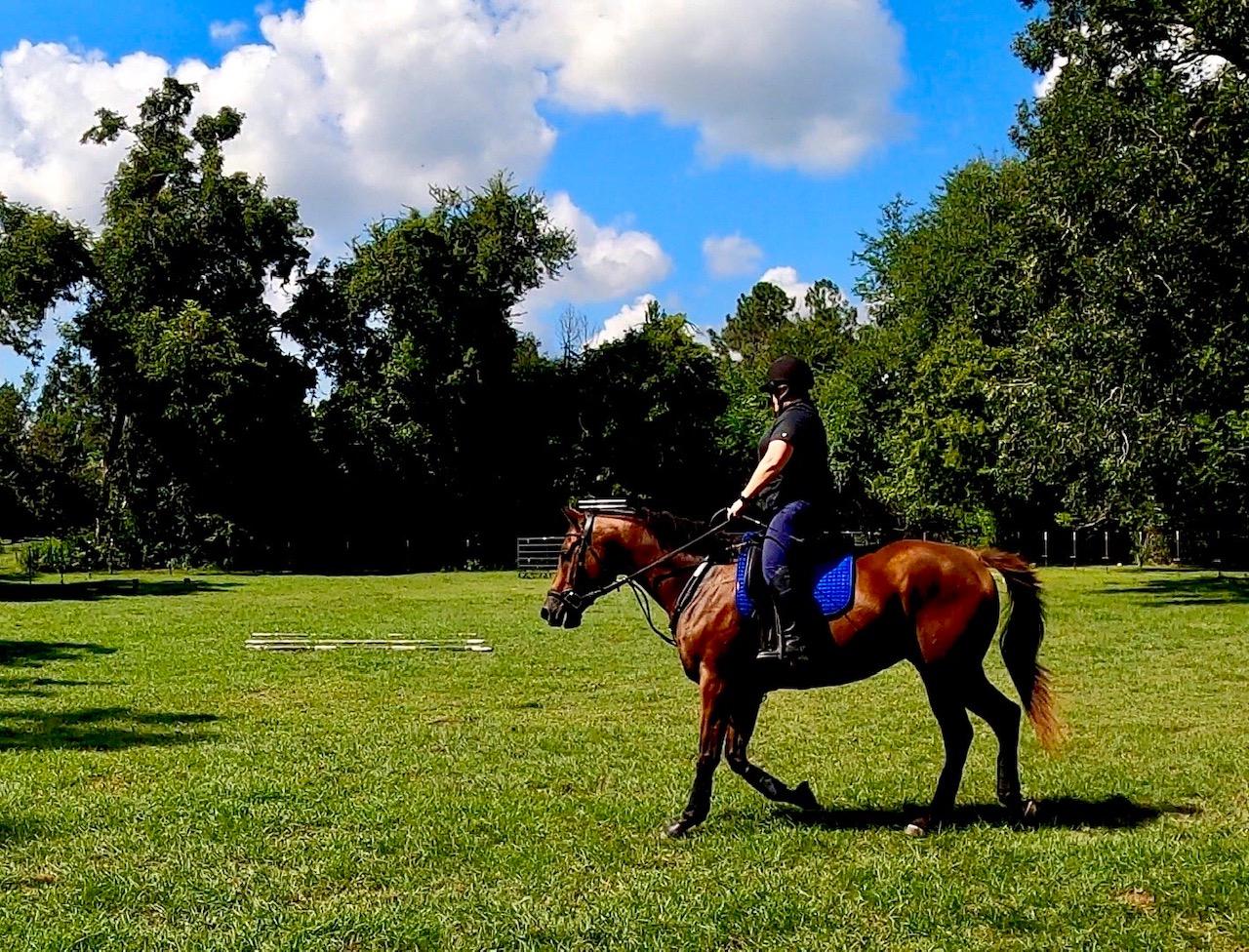 Me on Spider. Photo by Libby Henderson.

I spend a lot of time analyzing my thoughts and motivation. The Retired Racehorse Project group of trainers reminds us all the time to stay in our own lane, and not to measure our progress against that of other trainers. My brain tells me that he should be schooling cross country by now, or jumping grids and small courses, or, well, even cantering under saddle. So my mind begins to wonder just what am I doing, pretending that I know how to train a horse, and wishing so hard that I could magically return to eventing and jump right around a cross country course?

By the time I get done giving myself a hard time, I am just about ready to quit. I mean, who would be so foolish as to think they could buy all the gear, and become a real event rider? (Me, if my credit card balance has anything to say about it!)

Thankfully, I am a podcast junkie. And some of my favorites are ones that deal with sports psychology and motivation. (Good thing too, as it is clear that I need all the help I can get in that department!) An episode by Dr. Jenni Douglas landed in my feed over the weekend. Her podcast, Equestrian Performance and Fitness, has several early episodes on goals and motivation. She discussed how one of the things that keeps people from achieving their goals is feeling shame. Whether external, when others shame you for believing you can achieve things, or internal, when we are embarrassed about having dreams and goals. She stated that sometimes the reason we don’t set goals is that we are afraid of feeling foolish for failing to achieve them, or for having them at all. 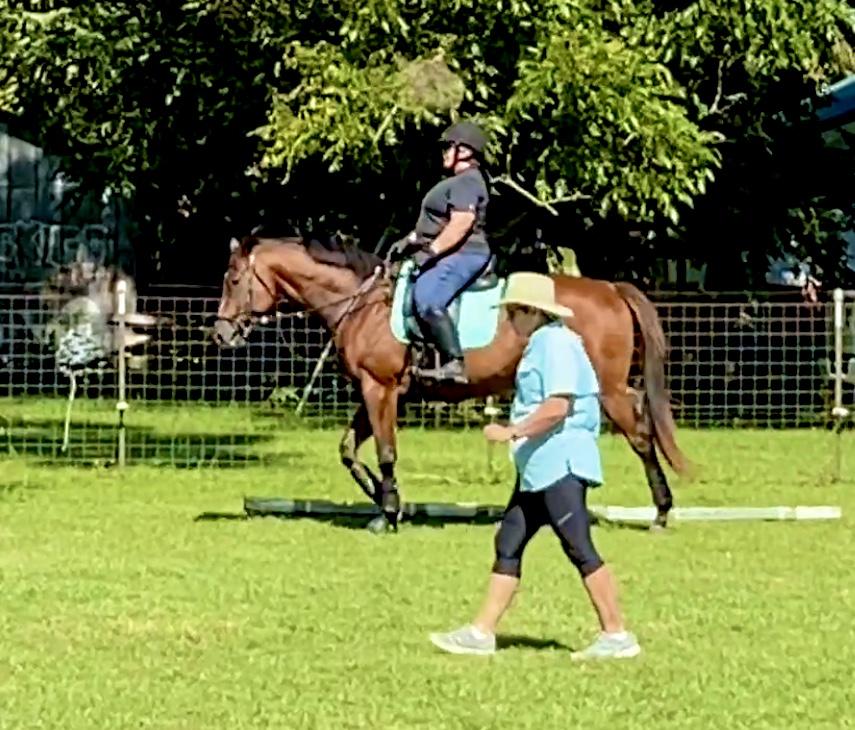 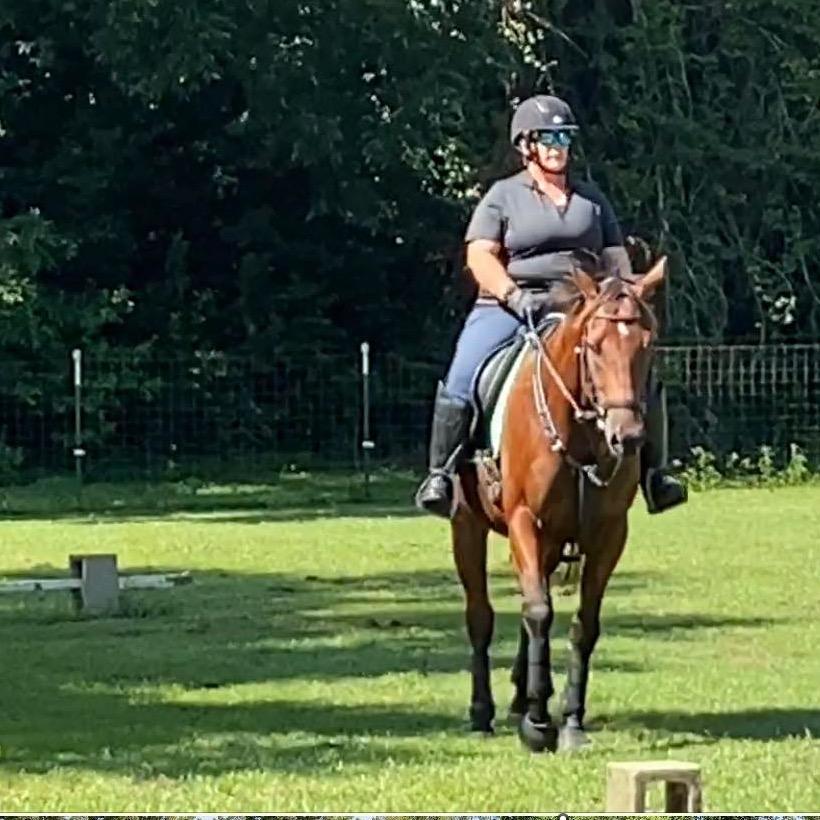 Me on Spider in a lesson. Photo by Libby Henderson.

There is a lot more in her podcasts – and I highly recommend them, but this got me really wondering about how much the fear of feeling foolish has held me back in the types of things I want to achieve? Not completely, of course, or I wouldn’t have ever applied for the RRP, or gone to Event Camp last December when I had barely ridden, and wasn’t comfortable cantering my mare.

But, it does restrict me to a certain degree. I’ve decided that I don’t want to have it hold me back any longer. Instead, I want to allow the eventer I hope to be to motivate me instead. When facing the choice between getting up for an early ride, or sleeping in a few more minutes, Dr. Jenni suggested the technique of asking yourself what the rider you dream of doing would do? Well, the serious rider I dream of being would always get up early, and get ponies ridden or worked early in the day. That rider would take their exercise program seriously, and eat well for proper fuel to get through a busy day. That rider would take excellent care of their tack, and keep the barn neat and tidy. That rider would develop good time management skills and always be on time for a lesson, and be organized and ready to show. (Ok, perhaps perfect time management is going a little too far!)

That rider would also be worthy of the gear that is necessary to be safe and well turned out to event. That rider would not, however, foolishly buy a ton of gear they don’t need. 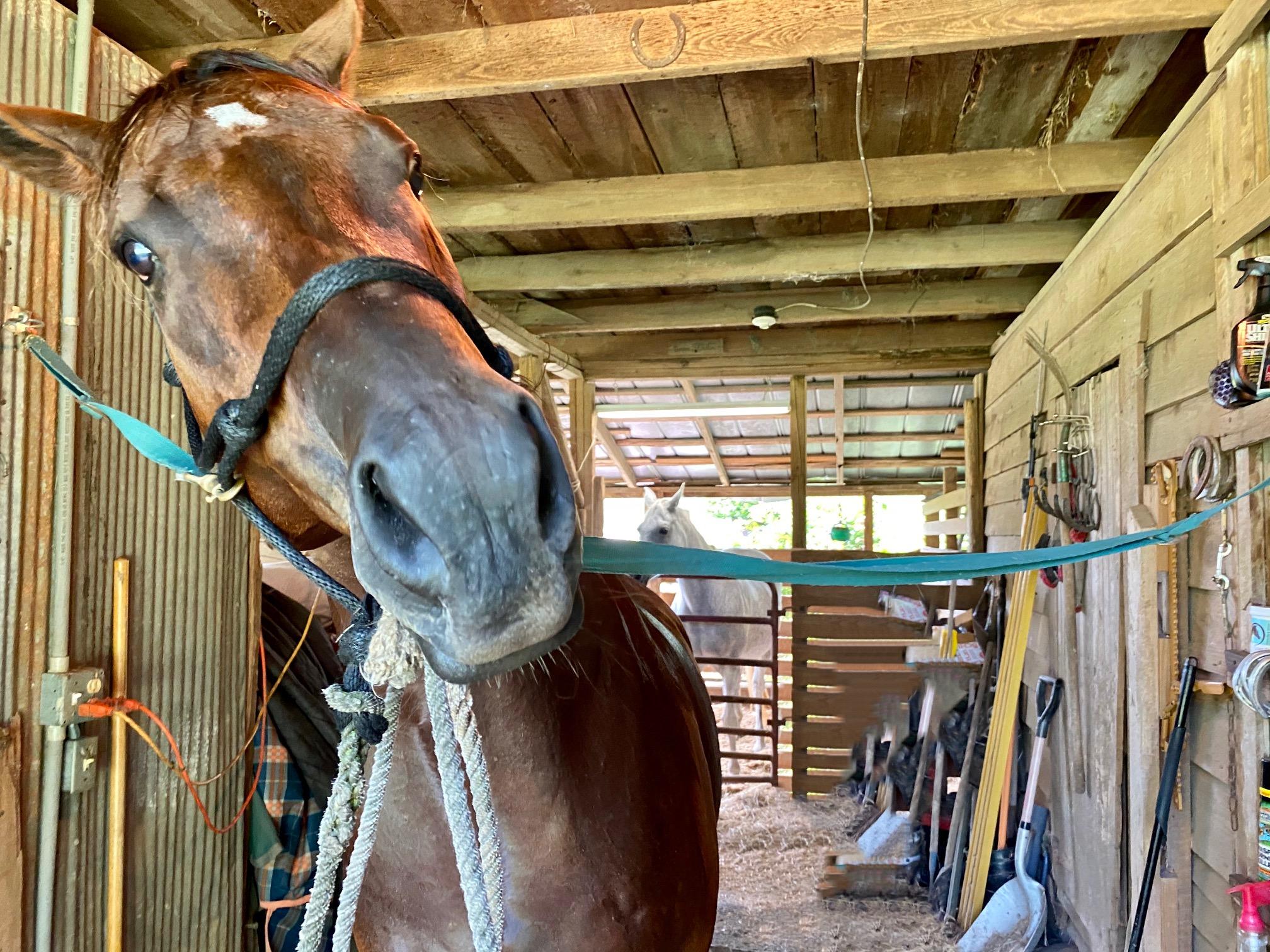 Spider in the barn with his sister, Razzy in the background, being goofy after a ride. Photo by Libby Henderson. 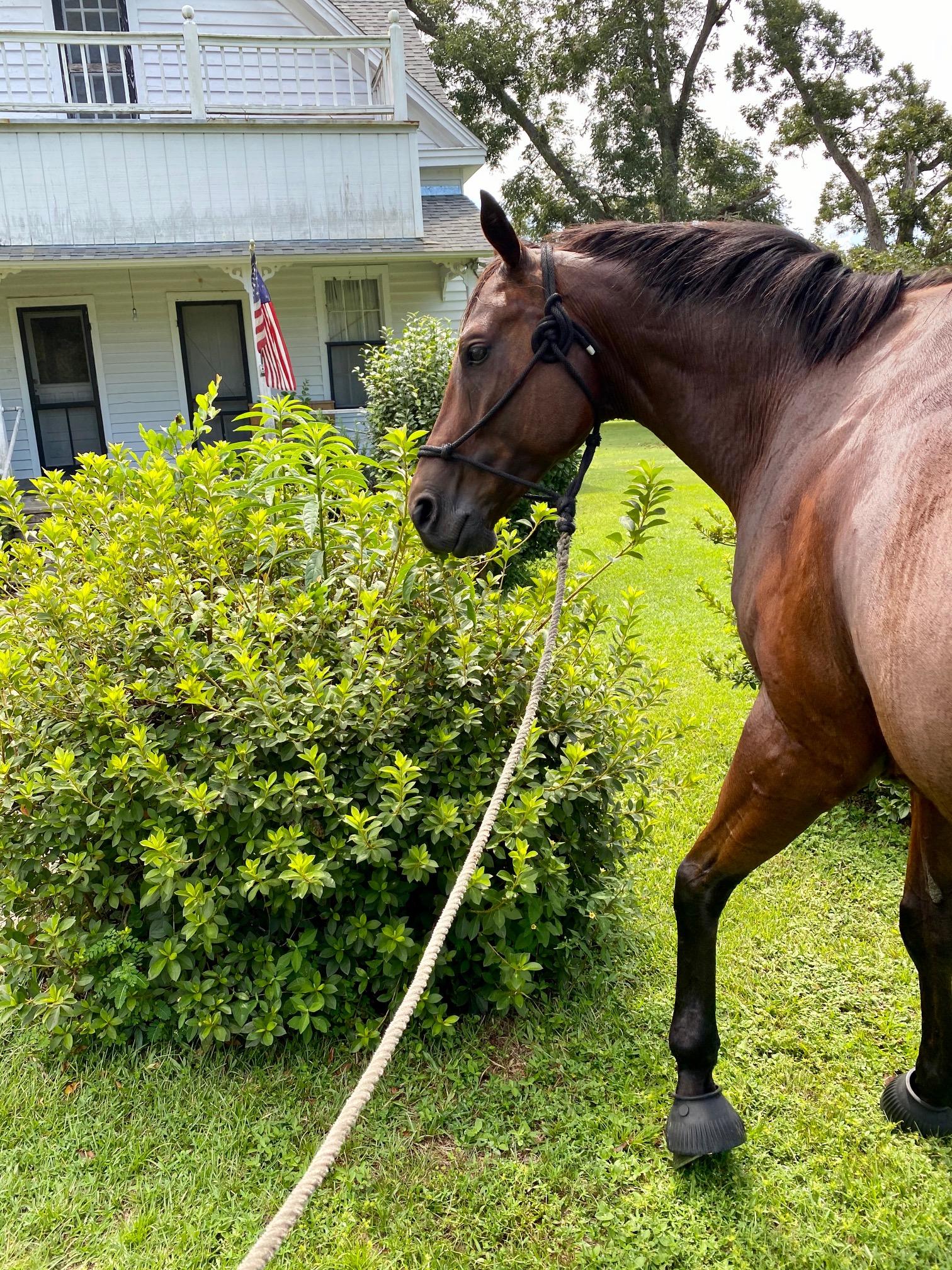 Spider insisting that he, too, can go in the house. Photo by Libby Henderson. 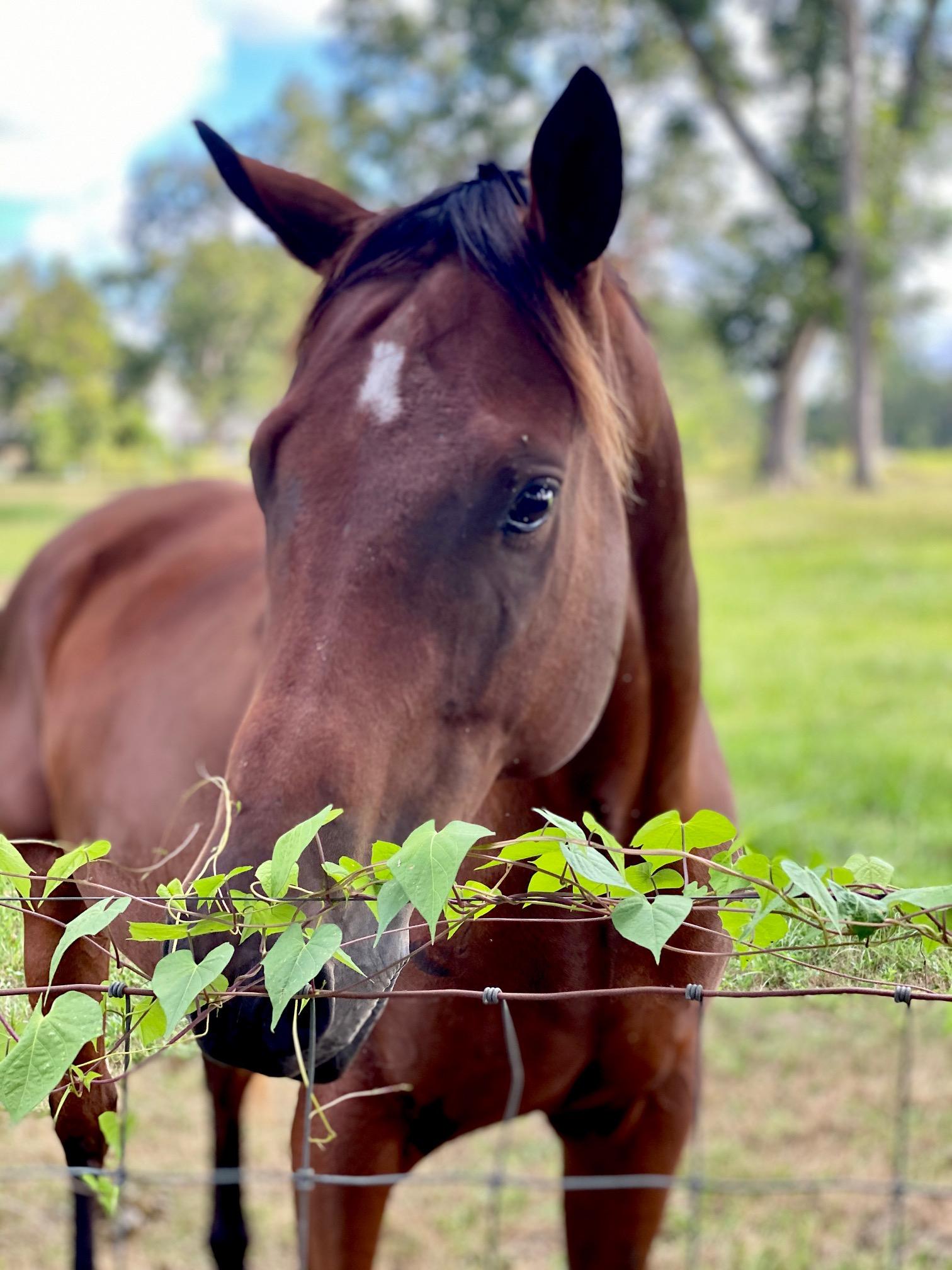 Spider being adorable in his pasture. Photo by Libby Henderson.

Spider (JC name Gossamer) has been the beneficiary of some of my renewed dedication, as he’s had two lessons in the last week, and been working hard outside of that as well. He’s shown a bit of a reduction in his ability to sweat, which in August in Florida has me more than a little concerned, so I’m watching that, and have added supplements that have worked for me in the past. We’ve been videoing our rides, as after taking the advice of the $900 Facebook Pony (her blog is totally worth following. Product reviews and weekly pics of baby horses!), I ordered a cool gadget that will film my rides without having to force anyone to video.

And I know that the answer is to go slow to go fast, and I must keep reminding myself to stay in my own lane, and to keep dreaming of the rider I want to be. And maybe to keep putting things on my wish list at Riding Warehouse!

**Shout out to Equestrian YouTube Vloggers (and also on IG and FB) – the always wonderful Elisa Wallace, here in the US, and in the UK, the Virtual Eventing Squad made up of Tina Wallace, aka @life_on_the_left_rein, Emily Dunstan aka @emd_eventing94, Megan Elphick, aka @elphick.event.ponies, and Lucy Robinson aka @footluceeventing – you guys have made this quarantine time so much more enjoyable!