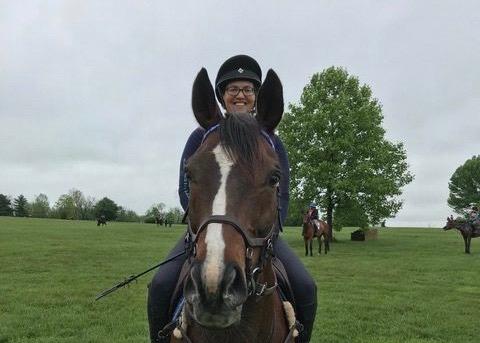 August 4, 2020DeAnn SloanReader SubmissionDiversity scholarshipComments Off on Anastasia Curwood: ‘We Need to Change the Idea That Horse Sports Are Not for Black People’

“Now I have not one but two of my very own, very spoiled horses. In every barn and every organization, I have been welcomed … though I have seldom seen any other Black equestrians.” 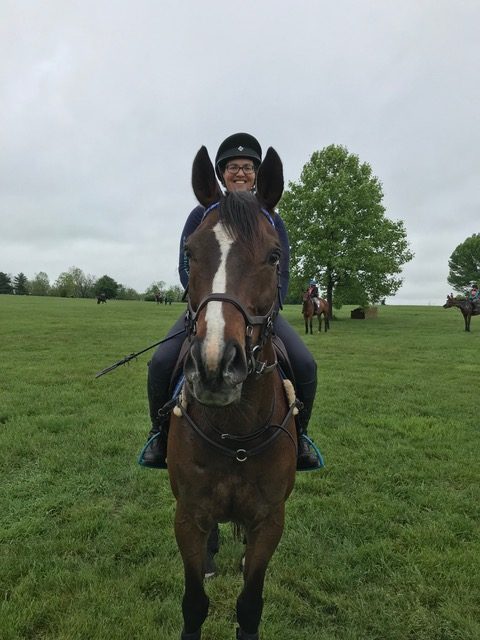 A cross-country school at the Kentucky Horse Park. Photo courtesy of Anastasia Curwood

Until I moved to Lexington, Kentucky, I had no idea just how intertwined Black Americans’ roots are with the history of horses in this country.

It is not a surprise that enslaved people fed, watered, mucked, groomed, and did all of the other care that horses need in the years before Emancipation in 1865. And nor is it a surprise that Black people have done the same jobs since. However, I did not know that Black Americans were the talent in the horse business, too.  We were the expertise: the trainers, the riders, the stallion managers, the pedigree experts, and sometimes the owners. The first Kentucky Derby (1875) was won by Aristides, a horse trained by a Black man (Ansel Williamson) and ridden by a Black jockey, Oliver Lewis. The horse would go on to be the three-year-old national champion. This was not a fluke, especially regarding jockeys; fully half of the winners in the first three decades of the Derby’s existence were Black. Horse racing was the blockbuster sport in the late 1800s, and while we often remember the horses, and perhaps their famous and wealthy owners, most do not know that Black athletes were the sport’s human stars.

I certainly did not know this. As a young Black girl growing up just outside of Boston, I only knew that the pictures of horses in the pages of a children’s book were like magnets to my eyes.  I stared at the drawings, memorizing the colors (bay, chestnut, red roan, blue roan) and looking at the horses performing different jobs. I started talking about which horse I wanted and how much I wanted to ride. My parents, an interracial couple who had grown up in cities, explained that there was no way we could have a horse. But then my dad found out from another Black dad, a former colleague, that his daughter not only took lessons, but owned a horse that they boarded about 20 minutes away from our house. This discovery opened up a world of possibility. Soon we were visiting the farm … and then I was signed up for lessons.

I have never stopped taking riding lessons. I am grateful for that other Black girl who was the key to my parents’ consent to let me ride. My parents were not wealthy, but they figured out a way to get me in the saddle, and when it became clear I would not relent, I finally got my very own horse. After a brief stint in hunter/jumper land, my dad determined that Pony Club and eventing were the best ways for me to develop horsemanship on a tight budget, so that’s where I wound up. Now I have not one but two of my very own, very spoiled horses. In every barn and every organization, I have been welcomed … though I have seldom seen any other Black equestrians. As for my own seemingly random penchant for horses, my family has figured I inherited it from a great-great grandfather who was a clocker on a racetrack in Ohio. Certainly, neither parent would have expected any child of theirs would be a lifelong horsewoman. 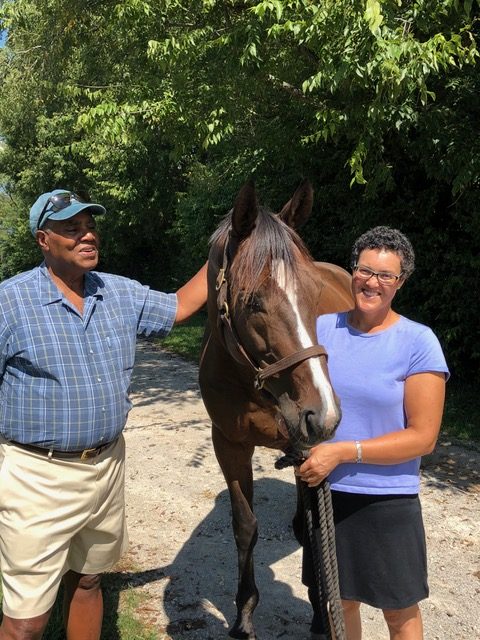 Me with the dad who enabled me to start it all and my OTTB, Rock Hard Attitude. Photo courtesy of Anastasia Curwood

In 2014, still as fixated on horses as ever, I had the outstanding good luck to land a faculty job at the University of Kentucky. I had earned a PhD in United States history at Princeton in 2003, and focused my teaching and scholarship on African-American history. The job market for history professors is national, so I could easily have wound up at any number of places across the country. But I wound up here, in what some call the horse capital of the world. Around the same time, my stepmother was working on our family tree and discovered that my great-great grandparents, Louis and Kitty Thomas, were born enslaved in Shelby and Owen Counties, Kentucky. This was the same great-great-grandfather who family lore said had been a clocker on the track. I was thrilled to find out that I have Kentucky roots just as I was moving to the state.

And those roots are deeply anchored in life with horses. In moving to Lexington as a historian, I quickly discovered the rich history of Black equestrians here. Horses and Black Kentuckians built the industry and the region. In Lexington’s East End, the footprint of an old racetrack is barely traceable in the streets of the neighborhood. Here lived the great Isaac Murphy, the best jockey of all time. A few blocks away was the gate into the grounds. An elementary school sits in what was once the infield. A cemetery, African Cemetery No.2, contains the remains of men and women who supported the racing industry in central Kentucky in every role imaginable. Murphy himself lay there next to his wife until the mid-1970s, when he was dug up and brought to the Kentucky Horse Park to be re-interred by the grave of Man O’War. The horse, himself expertly managed by Black men until his death, was surely exceptional, but I suspect Murphy might have preferred to lie in peace among his family and neighbors. He remains the only human being buried on the grounds of the park since it was founded.

Why, if Black horsemen were so central to the sport, don’t we see many more Black equestrians in racing or elsewhere? Why am I so unusual among other horsemen and horsewomen? The answer lies in the history of racism in this country. Prior to Emancipation, wealthy white men owned not just the horses but the people whose knowledge made success with horses possible. Young boys could be coerced into riding races (and were sometimes buried in steaming manure piles up to their necks in order to sweat their weight down before races). But about twenty years after chattel slavery ended in the U.S., a tide of racist policies, enforced by violence, took over our state and local governments. The racial hierarchy white Americans created became known as Jim Crow, with its familiar Whites Only signs and repressive political regimes. The horse industry was no exception. Black jockeys were forced out of riding races. The most talented among those remaining on the track, Jimmy Winkfield, was exiled to Europe. And Americans quickly forgot that the foundations of the tremendously popular sport were in Black talent. By the time I was putting a leg over a school pony almost 100 years later, it seemed like horses had always been for white people only.

But now I know better, and I’m proud to be a Black equestrian in a long American tradition. I’m also looking to resurrect historical memory of my forebears, as a consultant for the Chronicle of African Americans in the Horse Industry project. We need to change the idea that horse sports are not for Black people. We lost earlier generations of skills and knowledge with Jim Crow racism, but we can gain future generations of excellence in horse sports if we work to fight racism now.

GET INVOLVED: You’ve been to the Kentucky Horse Park for shows, perhaps, but have you ever checked out its International Museum of the Horse? As Anastasia notes, it is home to the Chronicle of African Americans in the Horse Industry project, an online, interactive archive to house and display photos, documents, artifacts and oral histories of Black equestrians. Other current exhibits at the Museum worth checking out include Black Horsemen of the Kentucky Turf and Buffalo Soldiers.

Want to know more about the history in this essay? Anastasia recommends these books:

Katherine Mooney, Race Horse Men: How Slavery and Freedom Were Made at the Racetrack (Harvard University Press, 2014)