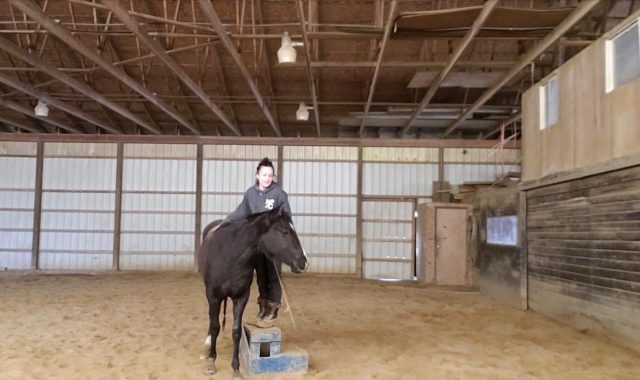 April 14, 2020DeAnn SloanNicole Cammuso#HORSE TRAINING, #libertytrainingComments Off on Moving Toward a Liberty Start: The Mounting Block Is the Place to Be

As the next step in her liberty training, Nicole introduces the idea that the mounting block is the best place in the barn. For her two-year-old filly, this concept is pivotal as they move toward a liberty start. 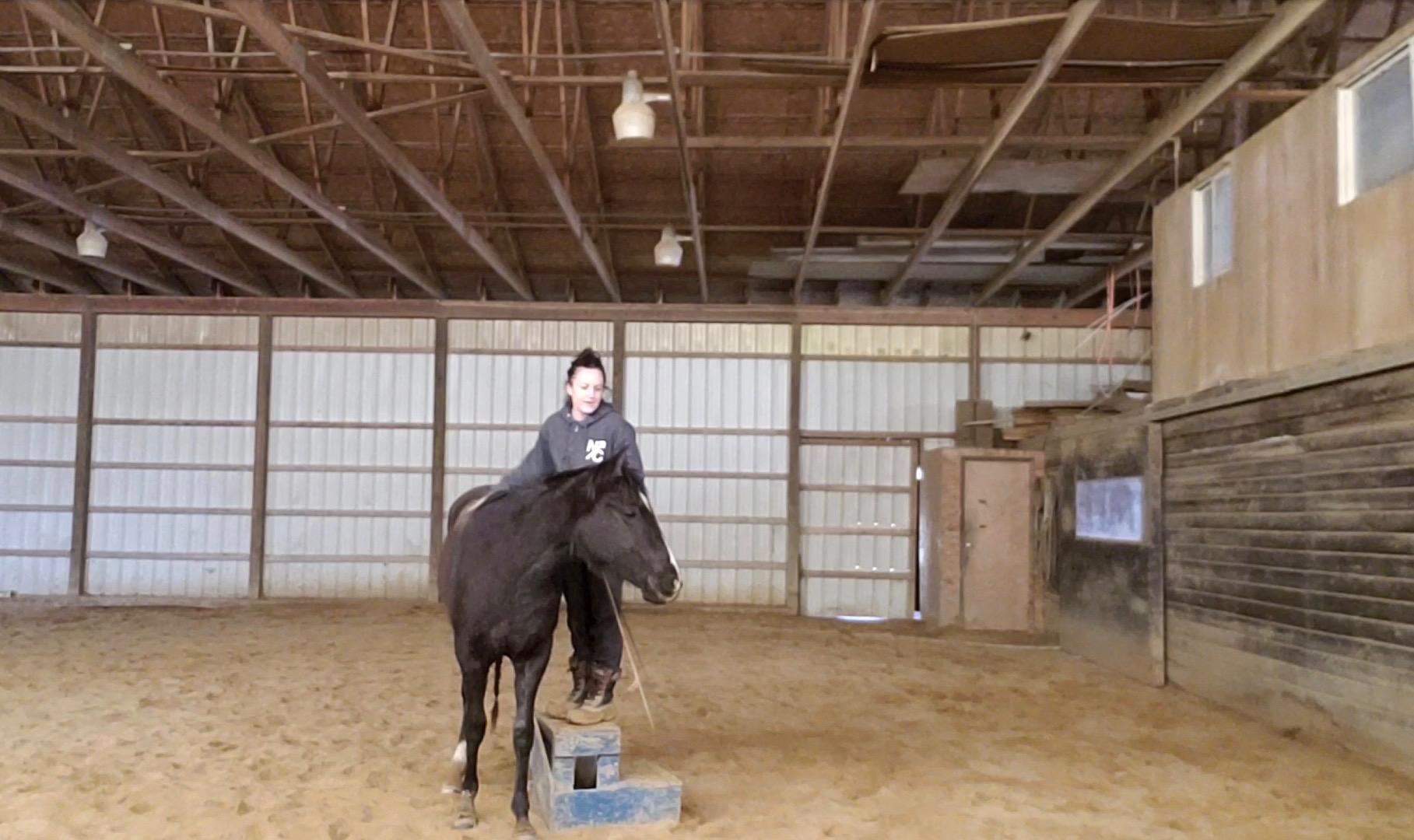 In a few weeks, Bugatti officially turns two years old! I thought it would take forever to get here, but time actually flew by. There are so many things you can teach a horse and that a horse can teach you before you ever think about getting on its back. Since Bugatti is the first horse I have started from scratch as a weanling, I want her to be started right and trained better than any other horse I have worked with before. 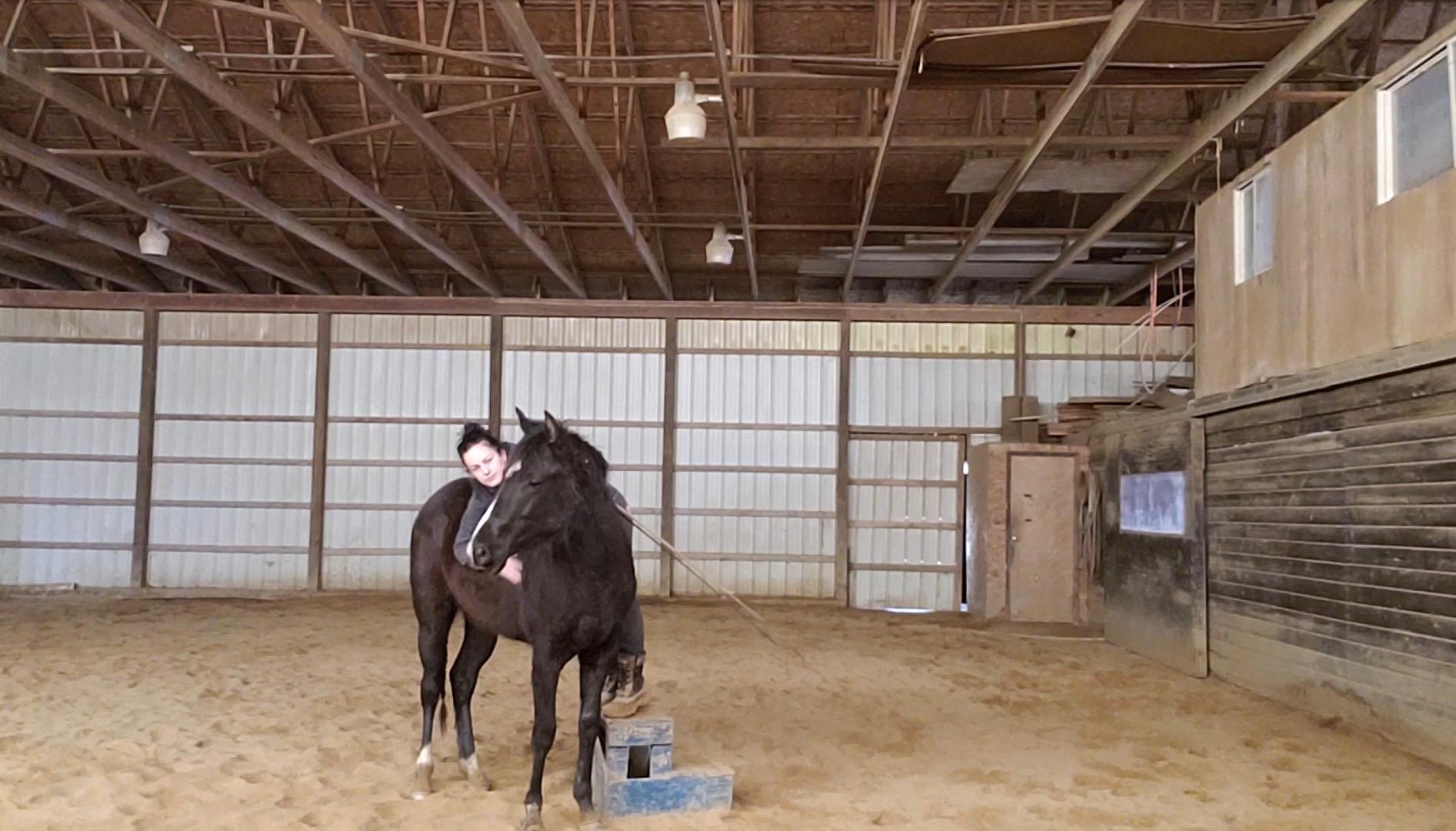 I have been loving this journey of building a better connection with my horse. As we head into her two-year-old year, I feel pretty good about how much she already knows. I also do not feel any sense of urgency to be on her back by any sort of deadline. I would like her to grow a bit more before I’m on her significantly, and mentally she still has a little growing to do as well.

But that doesn’t mean I can’t continue to prepare her even more. I have recently started drawing her to the mounting block and getting her to stand next to it horizontally. I am making the mounting block the best place to be. It’s a spot where she gets loved on, scratches and rewarded. It’s a place of relaxation.

Some prerequisites I had for her to get her set up in the correct position at the mounting block were for her to be able to sidepass toward me and for me to easily move her body parts, including forward and backward. 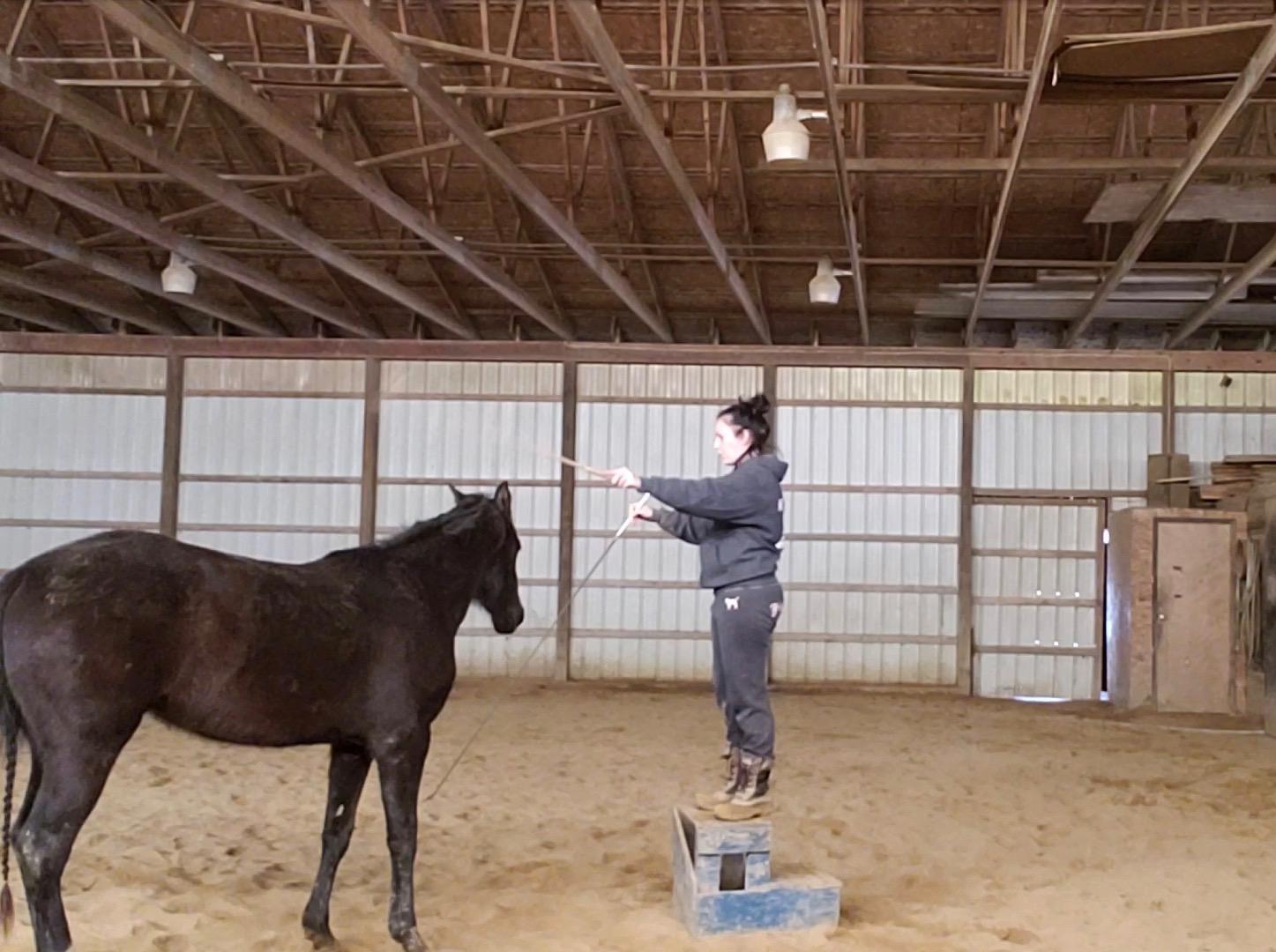 We have been playing with this mounting block idea for a few sessions now, but most recently I started draping myself over her back, and touching her opposite side, to start desensitizing her to me on her back. By the time I actually do get on her, I want it to be completely normal to her. I try to read her signals and back off before I cause her to get uncomfortable and leave. I then reward her by removing the pressure, sometimes by even walking away completely 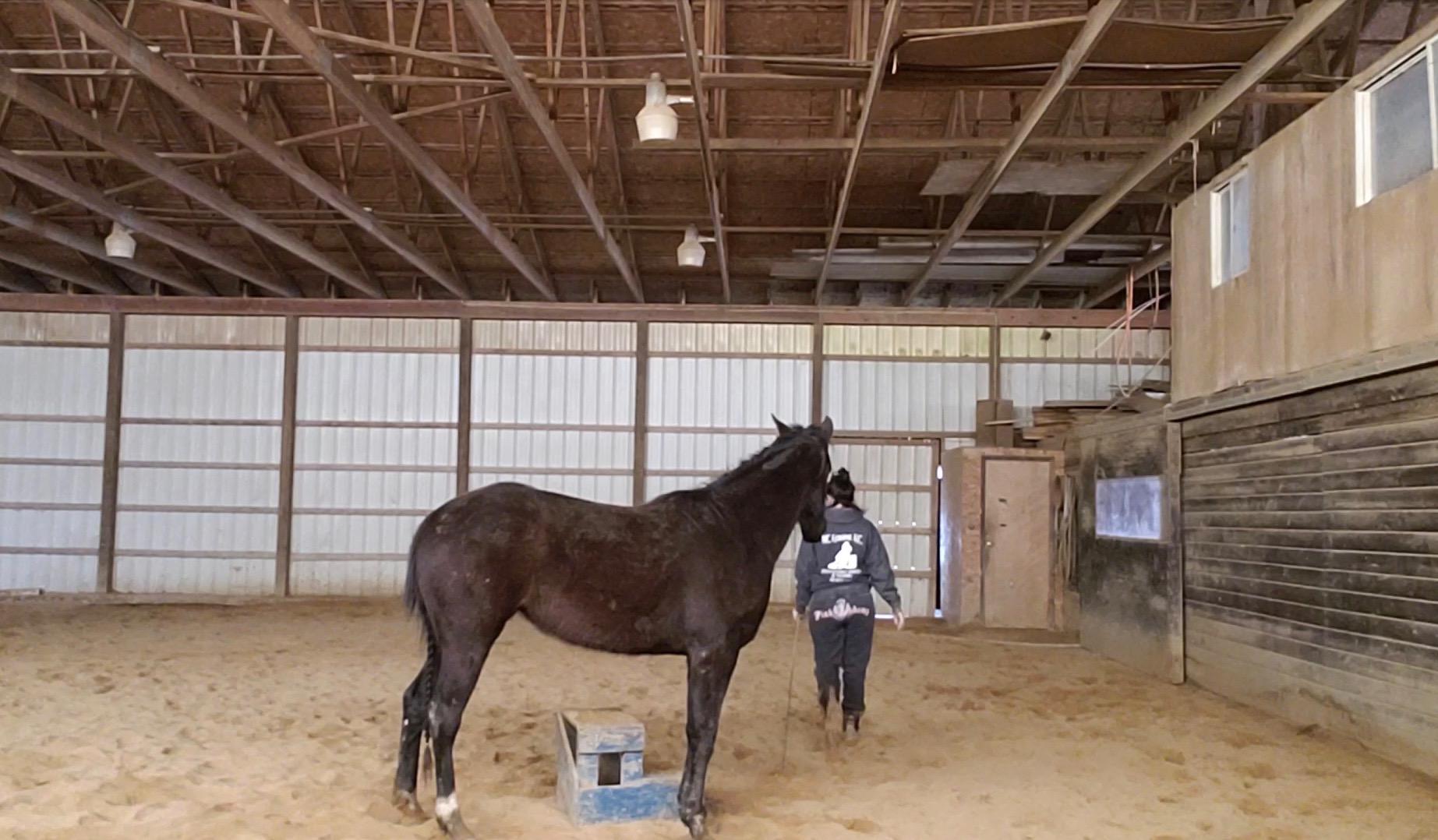 Sometimes I’m successful at it, but other times I am not and she will move away if I am putting too much pressure on her. If I can draw her back in quickly, I do. If I lose connection, I turn it into a win-win situation, not punishing her for leaving, but redirecting her and driving her out to work around the arena for a bit, usually at a canter. Then I invite her back in at the relaxation spot, aka the mounting block.

Early in this session, if I lost contact and was driving her around, and she offered to stop at the mounting block, I let her. She showed me she was thinking about it and grasping the concept, and I rewarded her initiative. There are times I wouldn’t stop driving her just because she offered to slow down at the mounting block because I felt in the moment keeping her doing what I was asking was more important. I gauge that by body language and how disconnected she is. 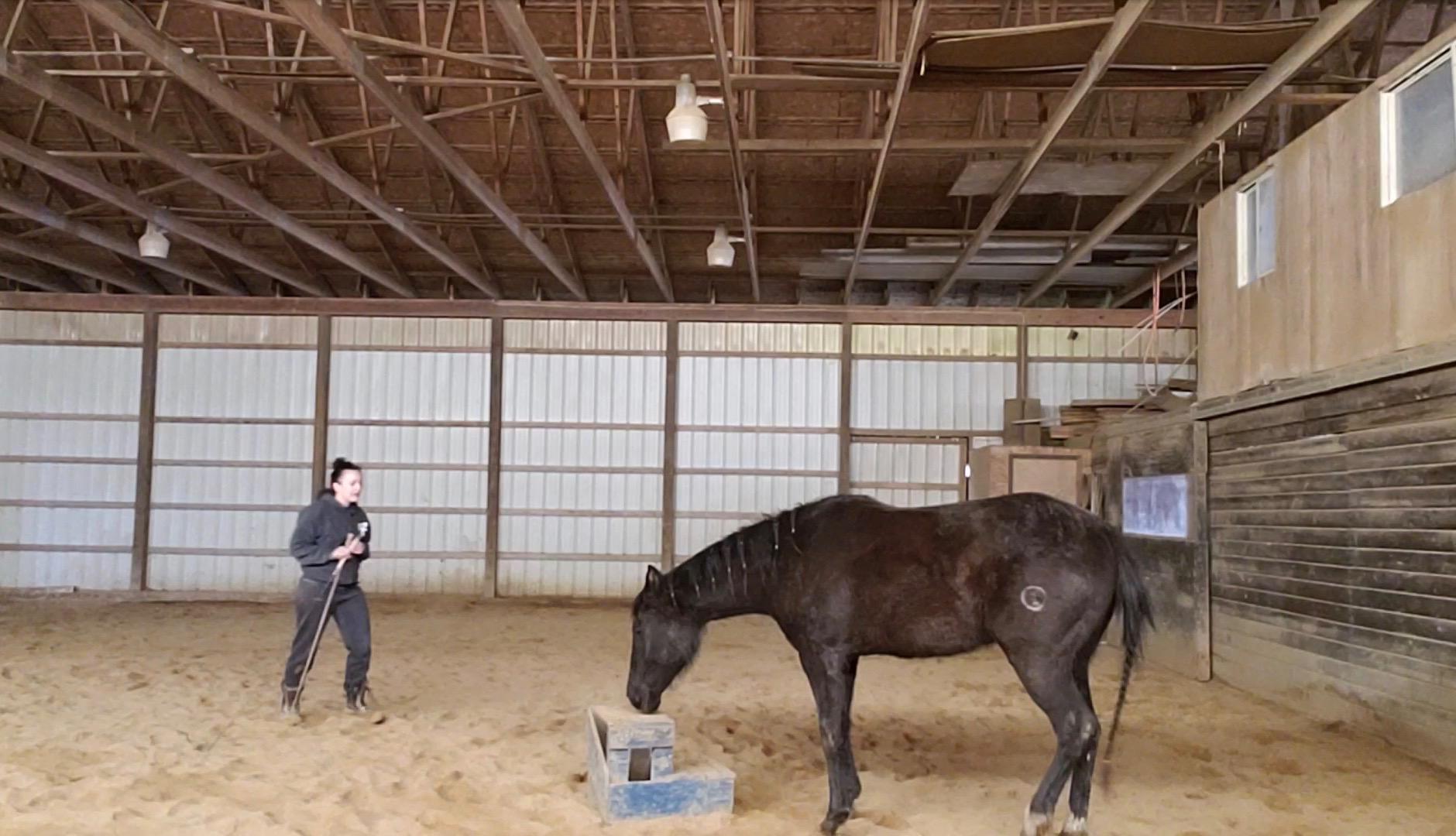 I was so pleased with how this session panned out and how she is grasping the concept of the mounting block as the best place to be. I don’t want to rush getting her used to me being draped over her, but she is coming around to that idea fairly quickly as well. It makes me feel a little less crazy about this whole liberty start idea. Until I watch her play and buck. Then I ask myself if I am ready for the path I am walking down.

Enjoy this video of the perfect balance of mixing in play with some work!

Very productive weekend with the ponies. My favorite clip from Bugatti's session today. Harnessing her energy (I see some liberty collection in her future) and reinforcing the mounting block as the best spot in the house, while adding in the idea of me draping over her back is the new norm 💕 #imakemoolahmoves #bugatti #libertystart