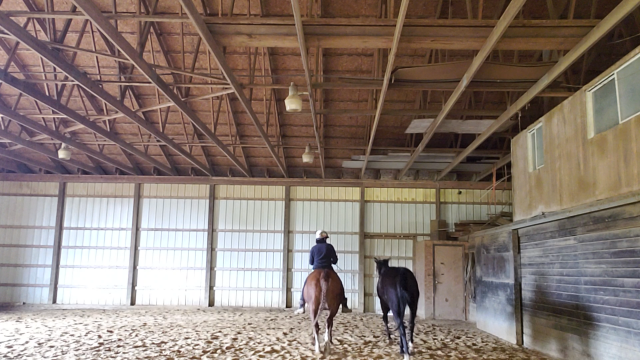 “I am going to be doing a liberty start with her… It’s exciting and scary. But it is also elevating me as a trainer to form a better connection with the horse. It is the true test to how good of a connection I have.” 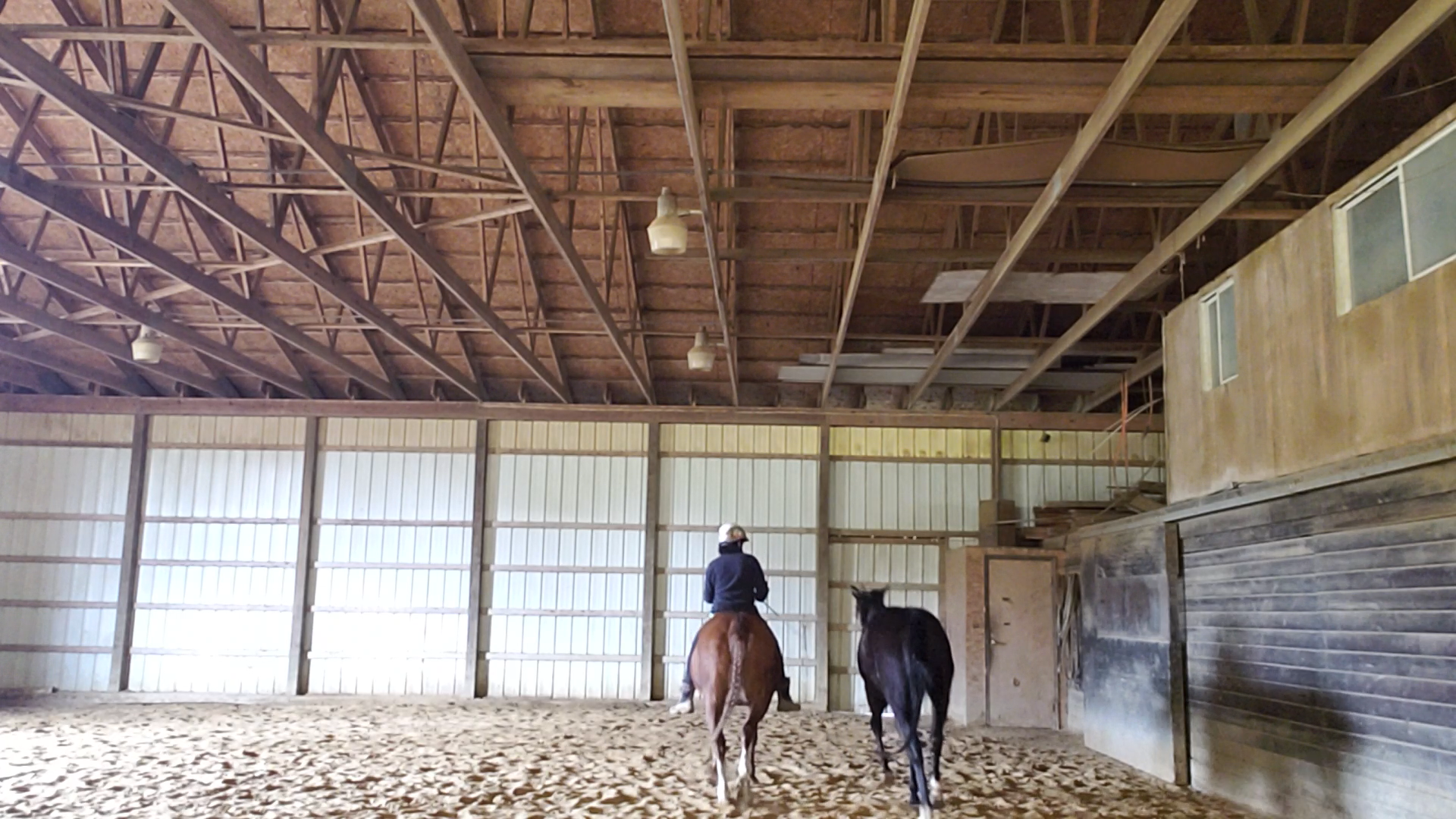 Can I first just say how refreshing it has been not to be on a schedule with my horses? I know I may have mentioned this in a previous article, but it truly is a breath of fresh air. I am under no timeline to have them doing XYZ by day 30, day 90 or day 365. I have the freedom to take things day-by-day and really observe the horse and be open to new ideas.

I do love keeping the forward momentum going with Bugatti’s training, keeping her ahead of the curve, but the last two months I have hardly found the time for quality sessions. Bugatti has been handled of course, and is expected to keep her manners, but I have not been introducing new material or sharpening her current skill set.

Now that some of the craziness of taxes, business paperwork and vacation is over, I carved out some much-needed time to work with my girls.

I even decided to pull Shelby out of retirement for a low impact role in my training day. This is not something I would have considered a few months back due to the residual effects EPM has left her with, which includes the occasional tripping. I don’t know if it’s the current mix of supplements and medication, or if it’s just time, but she has been looking great recently, flying around her field like a wild woman.

So, I decided to incorporate both ladies in a session by attempting to work Bugatti while sitting on Shelby. A ponying session at liberty, if you will. My rationale was that this would allow her to get more used to me working from above her. I could try out all the steering buttons I have taught her from up above to see what needs to be worked on. 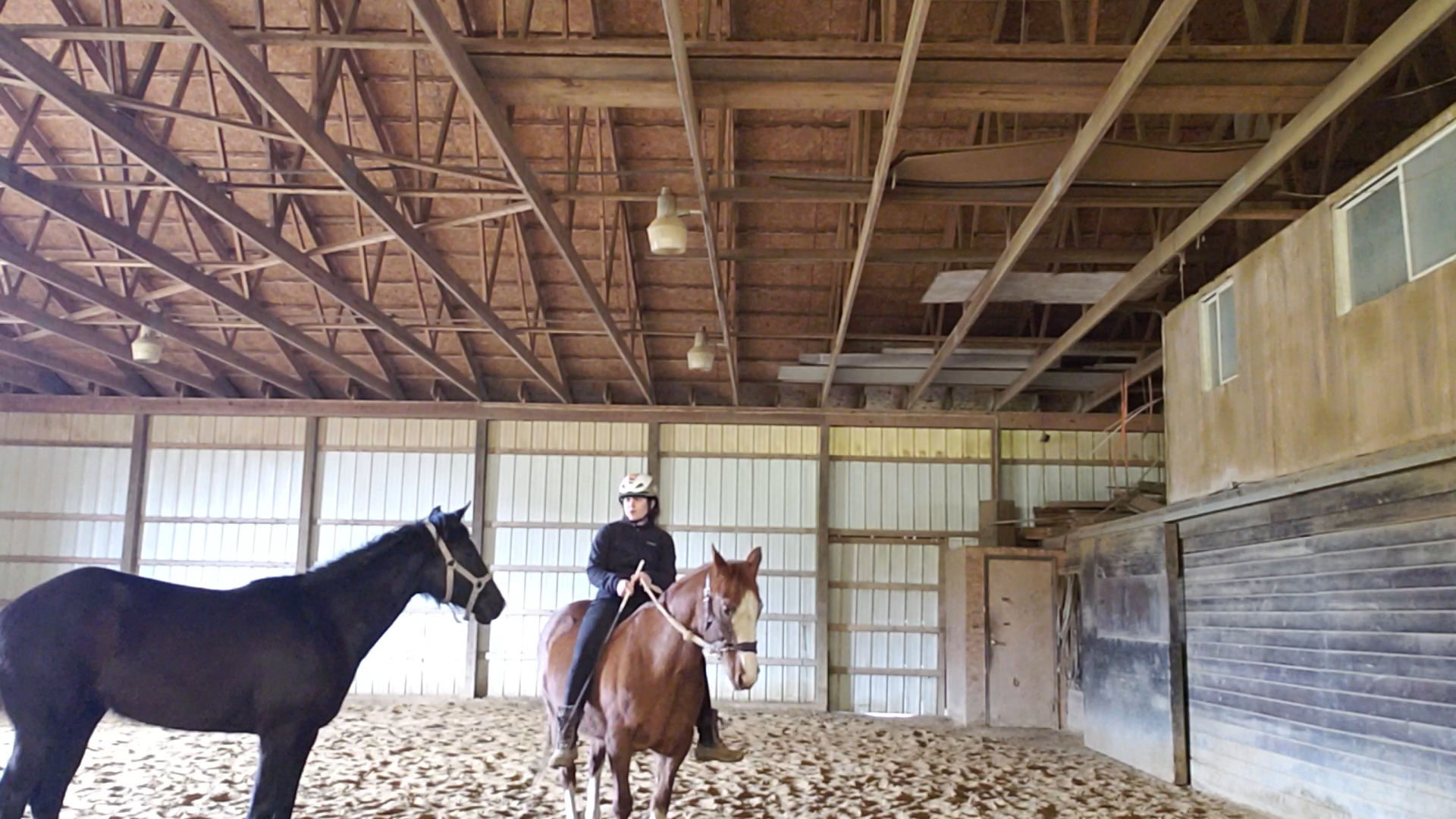 Since I am going to be doing a liberty start with her, I need her very connected and responsive to the cues. There will be no emergency break. No tools of physical leverage or force of any kind. It’s exciting and scary. But it is also elevating me as a trainer to form a better connection with the horse. It is the true test to how good of a connection I have.

Our session started out with Bugatti a bit disconnected, and Shelby a little confused, but they both got the hang of what I was asking pretty quickly. What I found interesting was the dynamics between the two girls early on. They are in a field together so they know each other and get along very well, but as I described in my last article “Do Horses Go Through the Terrible Twos?,” Bugatti is gaining self-confidence and challenging Shelby as the leader at times.

Shelby played her role to a tee. As I guided Bugatti to stay a close distance and similar pace to Shelby and me, Shelby made sure to express to Bugatti that walking ahead of us was not what she was suppose to be doing, and threw the occasional nip in Bugatti’s direction. As we worked, I noticed a few times Bugatti expressed frustration with not being allowed to be the lead horse. A few times she pinned her ears in my direction when I would add my cue at her chest to keep her from getting too far ahead of us.

She disconnected from us about two different times. I was a little unsure how I was going to draw her back in while on Shelby. One of the times I rode over to her and she joined back up. The other time I decided to try to create a win-win situation, sent her around the arena with careful gestures of my whip, and drew her back in to us as I normally did from the ground — and it worked.

I think this exercise is exactly what she needed to reel her back in from her delusions of grandeur that she was becoming boss mare of the year.

I decided to also use +R in this session. I have not applied +R in a while — I find myself going back and forth with +R and -R, but I knew things might get a little messy adding in two horses and I wanted to have big rewards to reinforce desired behaviors. Because of this, I kept Bugatti at my right side to keep working from my treat pouch easier. It was funny when she got the point of attempting to go on my left, then corrected herself and went back to my right. She learns so fast it’s crazy.

Overall this liberty ponying session proved to be a lot more beneficial than I expected. I will be doing these more often for sure. As we head into Bugatti’s two-year-old year, I will be doing anything I can do to get her prepared for her liberty start.