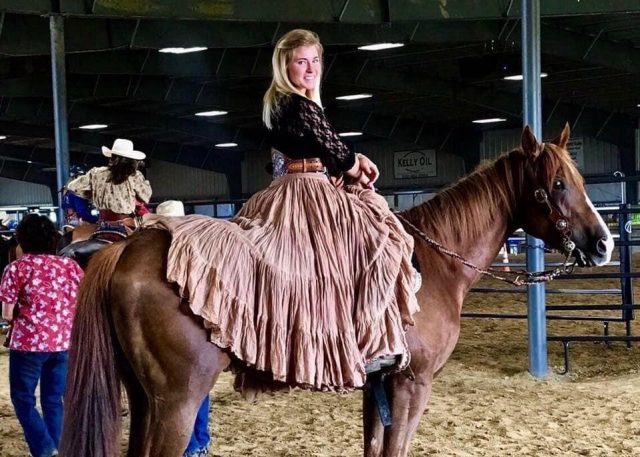 “I’m becoming a better rider from all the horses I’ve had the opportunity to ride, but deep down to the core, I miss riding Buns.”

On his journey to recovery I, along with In Stable Hands, have faced many challenges and educational topics that I have been sharing. We’ve faced and discussed proud flesh, his fracture, the tendon damage and maintaining a healthy weight. I’ve discussed a particular day where Buns decided it was a good idea to jump the round pen and pull down his stall front in a 24 hour period and kept viewers up to date on vet check ups.

In my last two articles,  I told you the reasons why I have gone through such extensive care with Buns, rather than thinking about the option of putting him down and discussed the frustrations of having an injured horse. This time around I’m going to discuss catch riding.

Riding is my passion. I attempt to swing a leg over at least one of my horses five days a week. It’s a way for me to relieve stress, get outside and get some exercise. It keeps my mind engaged and passes my time. This is the first time in a long while that both of my horses are down at the same time. With Buns being rehabbed and my mare, Tilly, in foal, I have found myself to be a cowgirl without a horse.

Desperate times call for desperate measures (okay, these aren’t really desperate measures but the phrase sounded good)! So what have I been doing while both my horses are out of commission? Catch riding! I have thrown a leg over almost any horse that has been offered. Below are all the horses I have been given the opportunity to take for a spin — or two (in no specific order).

Chance is special to me. Chance has changed hands between Jen and me a couple times. He was originally Jen’s horse that she sold to me. I had him for a few years and then, after a chain of events, I ended up giving him back to Jen. Chance will forever hold a special place in my heart and I always enjoy riding him. I’m grateful I still get to ride him even though he’s no longer mine. 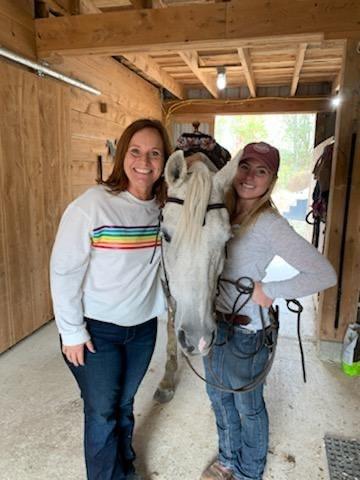 Jen, Me and Chance. Photo by Cari Worley

Dallas is a more forward horse. He has A BIG personality. He and Cari have been moving up the levels in mounted shooting together. He’s so seasoned he could run the patterns with his eyes closed. Cari has been nice enough to let me trail ride him and has offered him to me to compete in mounted shooting until Buns is back in commission. 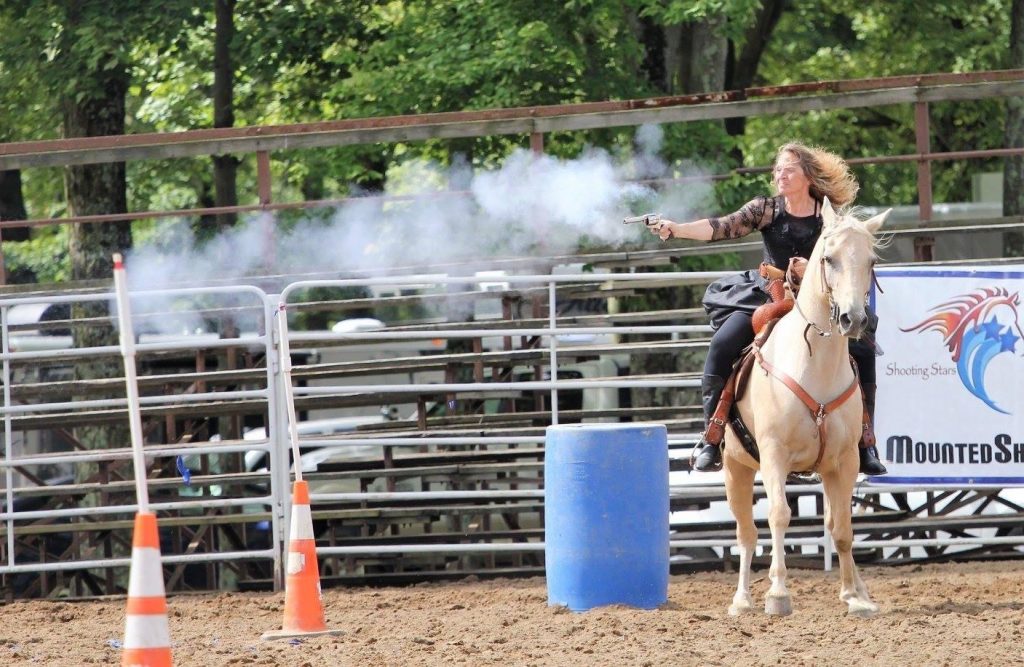 Scout is SO easy to ride. He’s a well mannered, point and go type horse. He also carries one of my biggest competitors in mounted shooting (so I try not to ride him TOO much out of fear I’ll get him fit just to beat me). Derek and I may be a bit competitive towards each other in the shooting ring and Scout is the horse that carries him to beat me more times than not — I hate to admit that. Regardless, I thoroughly enjoy riding him every time I swing a leg over him. 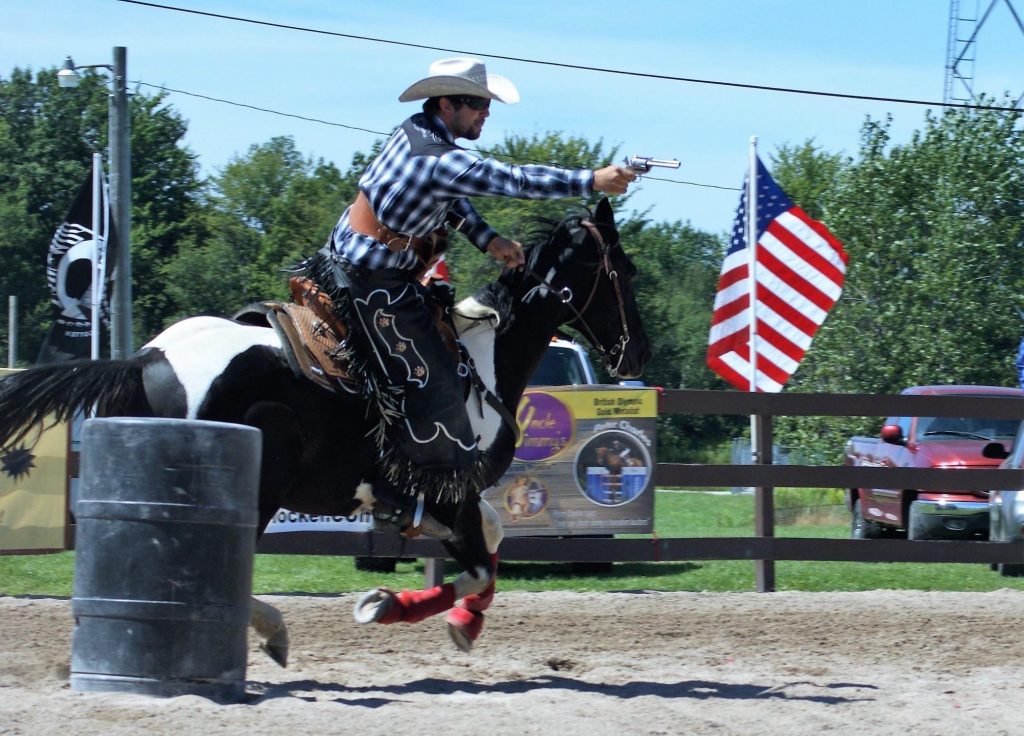 Ace is an old man of a horse. He totes me around on the trails and spoils me with his nice, smooth, rocking canter. I don’t even feel like I’m moving while riding him most of the time. The old man does have some tricks up his sleeve though. With age he has perfected his attempts to remove his rider by brushing into trees. I’ve figured him out though, so he won’t be pulling any fast ones with me — until I’m talking and not paying attention. 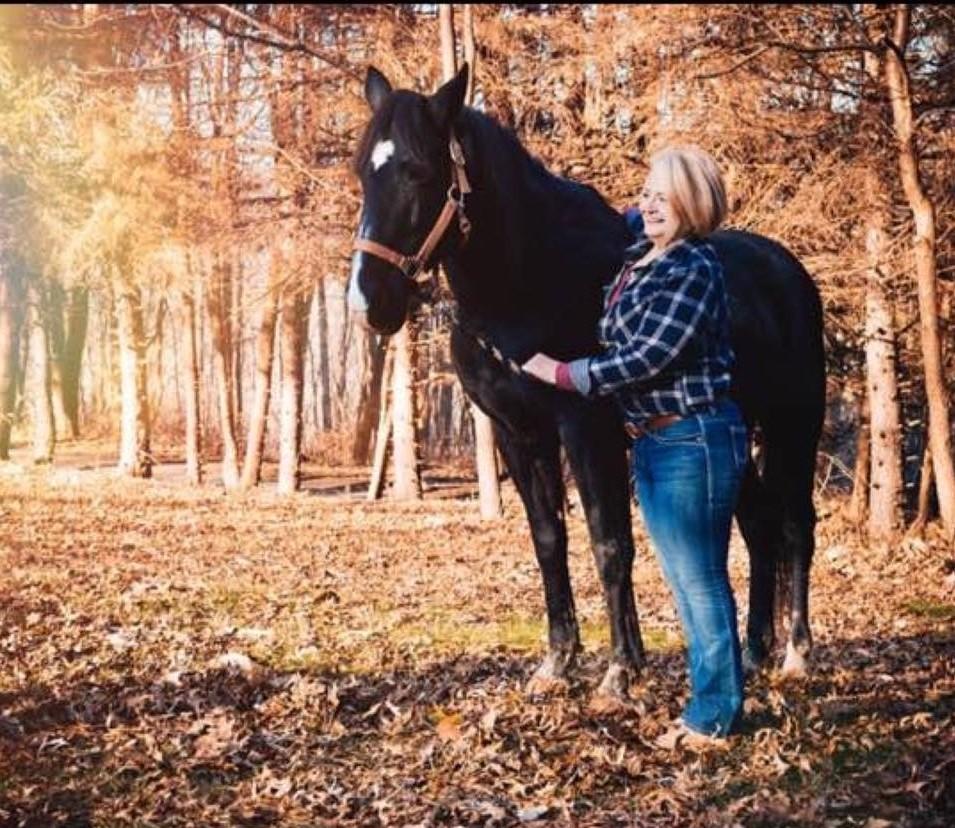 I refer to Marshall as “my favorite horse.” I enjoy riding him every time I get on him. He’s a beautiful horse with forward movement and he’s extremely responsive. The way he rides reminds me so much of my mare,Tilly, that it’s easy to adjust to the way he moves and responds to cues. 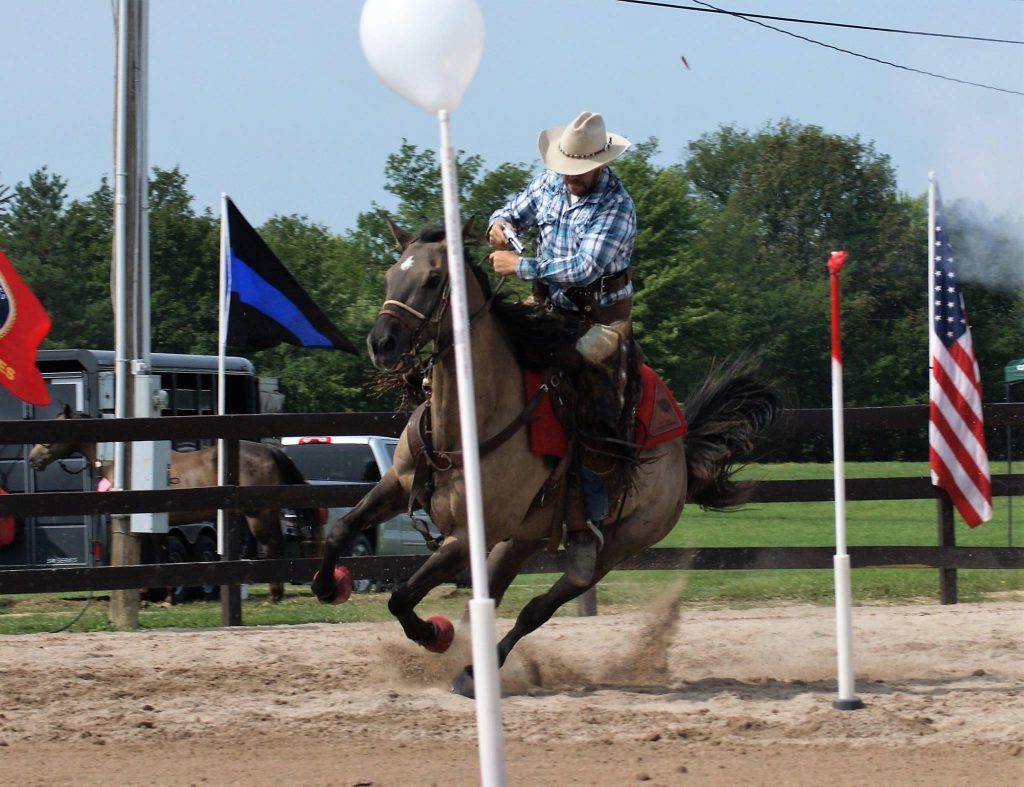 I was only able to ride Mac briefly at a shooting practice but in that brief amount of time I was happy to be on her. Mac, like Buns, is also a Thoroughbred and I LOVE Thoroughbreds. They are smart, hard working and can cover a lot of ground in one stride. Unfortunately she seemed a little off so my ride that day was cut short. 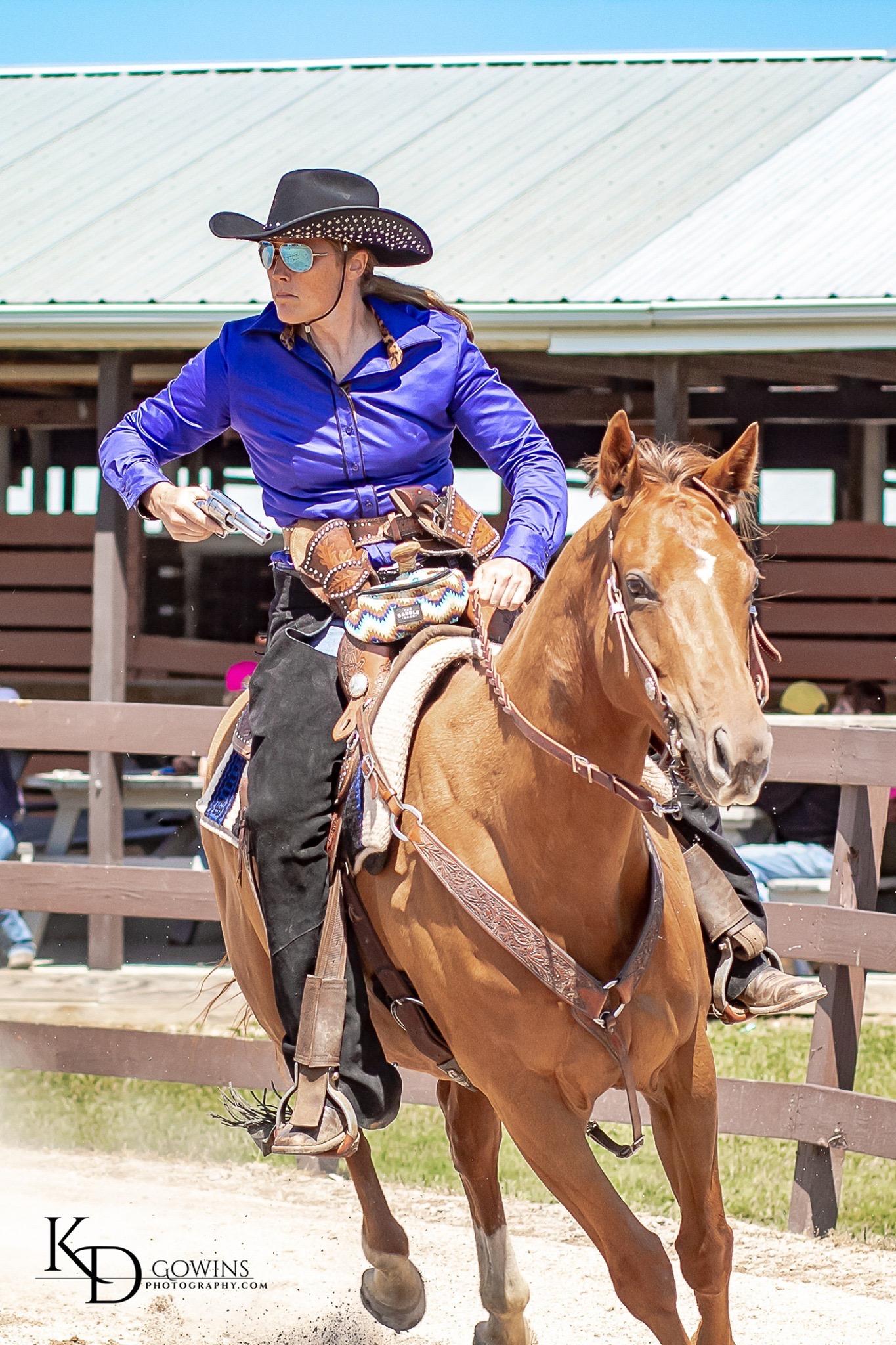 Gretchen is a mare and I really like mares (that is not sarcasm). During one particular ride, Jen asked me to gallop her as fast as I could to see how fast my phone would track us going. We were both super stoked when I saw that we went 21 mph. The well mannered lady can boogie, and she’s smooth while doing it! I can totally appreciate that in a horse! 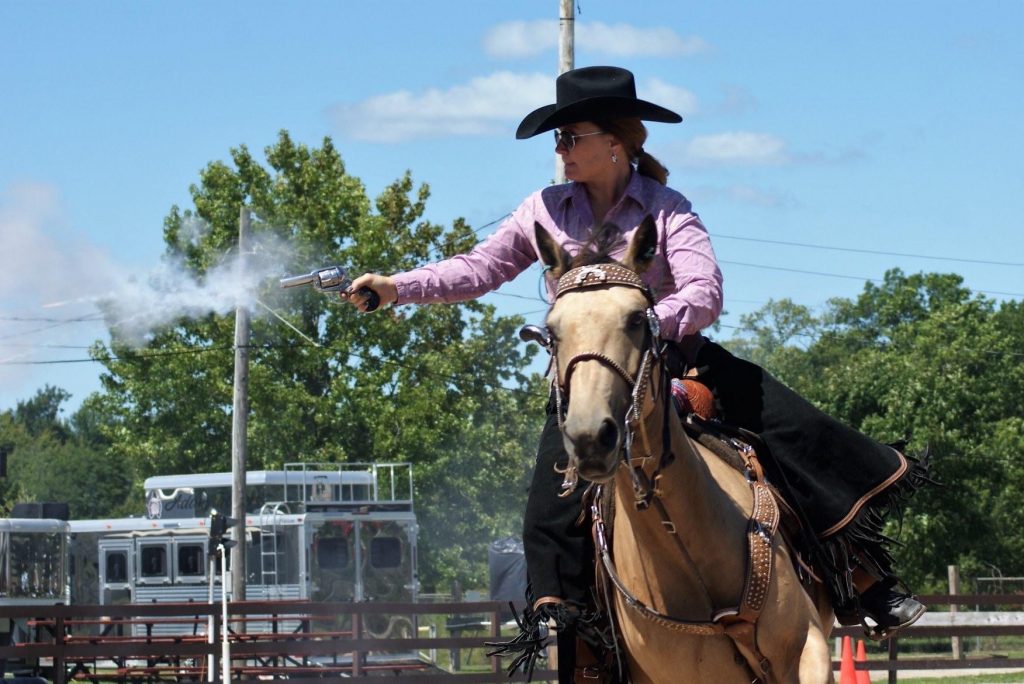 Because of Boone, I was lucky enough to compete at the last mounted shooting competition in my area. I can not thank James enough for allowing me to borrow him for a competition. I’m not going to lie, it’s hard to jump on a horse I’ve never ridden and compete in a sport where the object is to ride and shoot at balloons. There was a lot of adjusting but all things considered, I’d say we did well together! We even won some jackpot money! 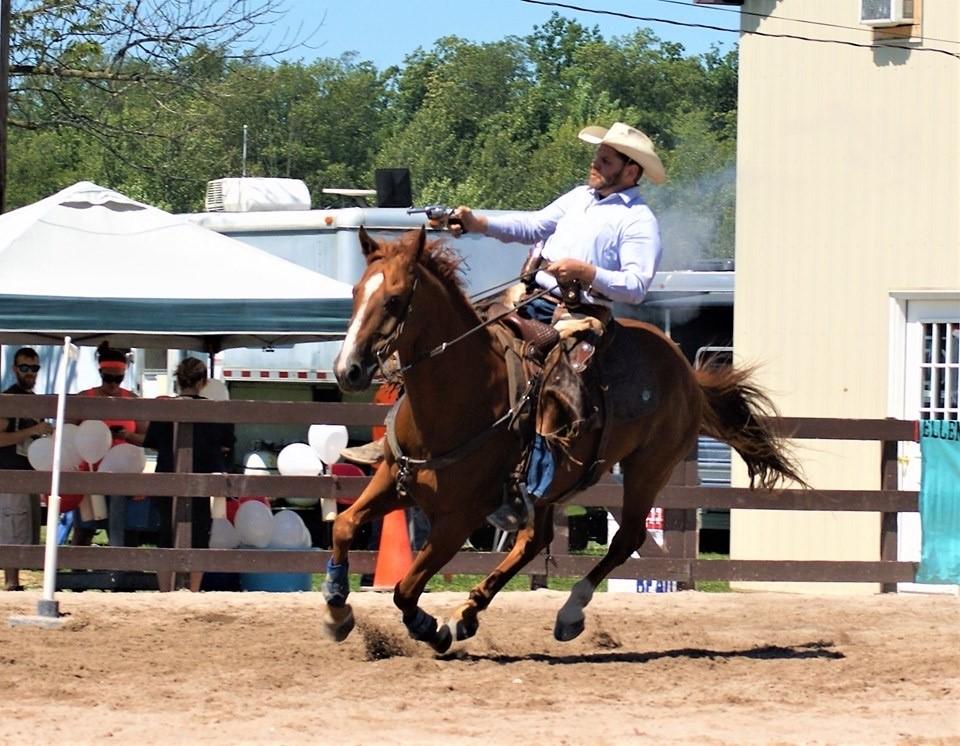 Last, but most certainly not least (he’s definitely one of my favorites), is Dunker. Dunker is another point and go type horse. There’s no funny business with him. He does what he’s asked and he really lets me know when I ask early or over exaggerate my cue. He is literal and he does what he’s asked when it’s asked. He’s taught me to be a better rider because of it. I was fortunate to ride him at Karla’s, go to multiple mounted shooting practices on him and compete on him. I’ve gotten to be quite comfortable on him. I pulled a check or two on him as well! 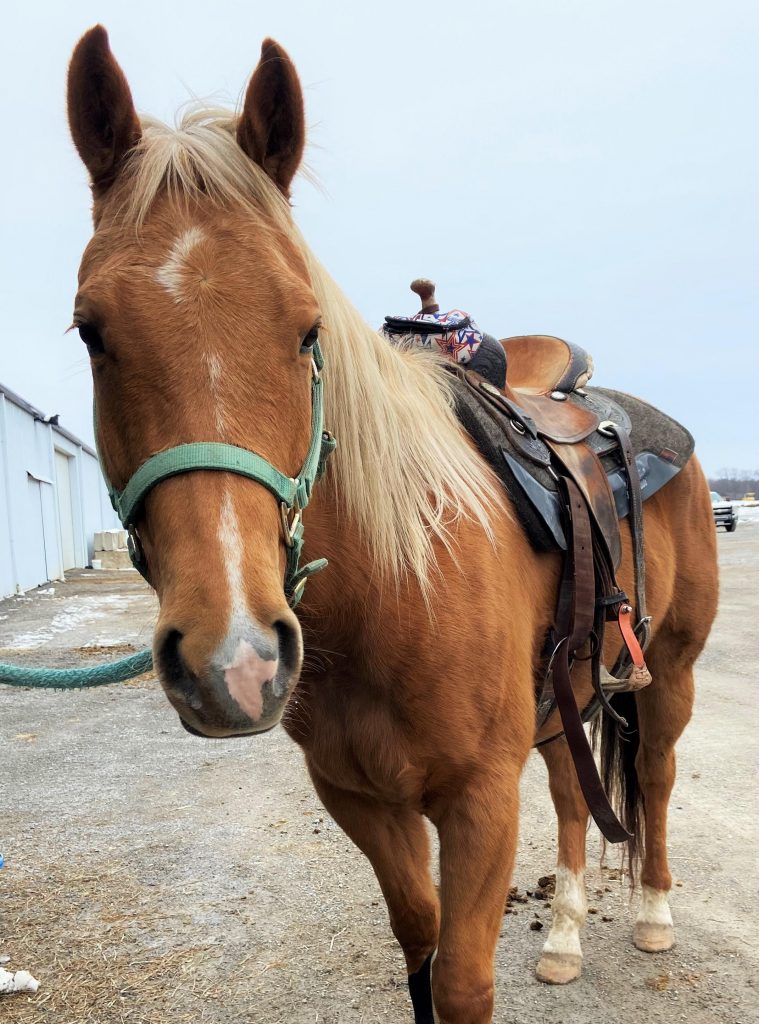 I may be forgetting some horses that I’ve had the opportunity of riding while Buns has been rehabbing, as so many wonderful people have lent me their horses. I can not express how grateful I am that individuals in the horse community have been willing to allow me to use their horses but, as the time continues to pass, I continue to miss my riding partner more and more.

Somedays I feel frustrated and ready to throw in the towel because no matter how close it feels, it’s still not Buns. Buns and I are on the same page most of the time. Our hiccups were always at a minimum because we were so used to the way the other operates. No matter how hard I search and how many horses I ride, I won’t find that connection anywhere else.

I’m becoming a better rider from all the horses I’ve had the opportunity to ride, but deep down to the core, I miss riding Buns.