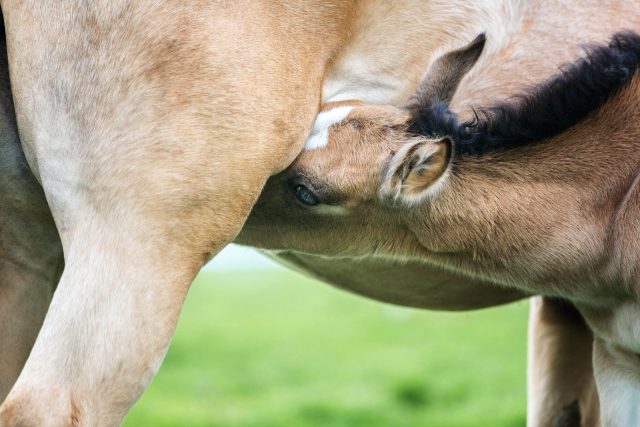 If you have a mare in foal, you’ll want to be aware of how her nutritional needs will change once she’s lactating.  Although the pregnant mare has her own nutritional needs, the lactating mare has particular demands as well. Kentucky Performance Products explains. 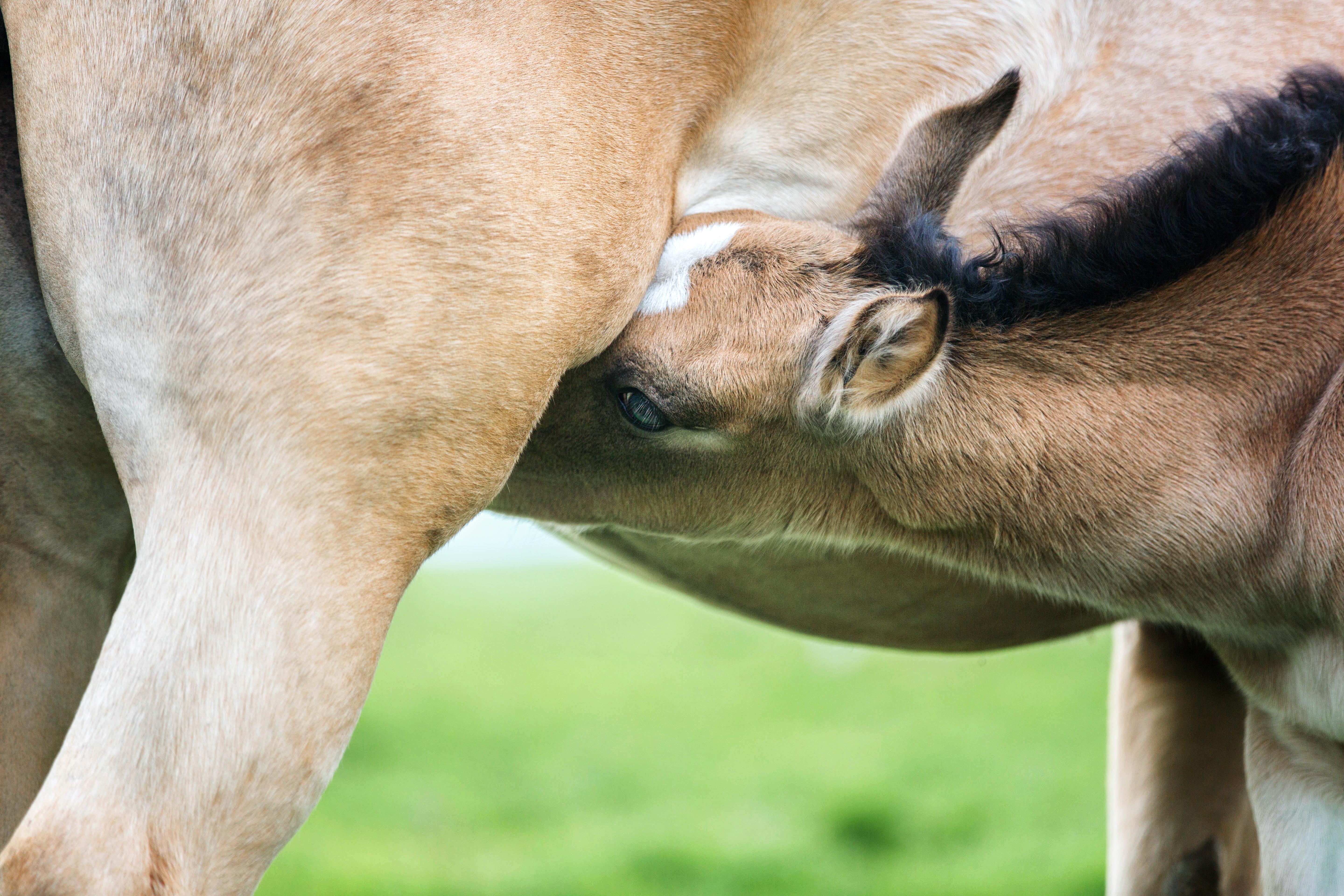 Lactation places extraordinary physiological demands on mares. Well-fed lactating mares produce the equivalent of 3-4% of their body weight in milk daily during the first two months of lactation. For a 1,100-pound Thoroughbred mare, that amounts to about 33-44 pounds. Considering a gallon of milk weighs almost eight pounds, average foals consume approximately four to five gallons of milk each day. In order to sustain this incredible output, the energy requirement of nursing mares is nearly double that of barren or early-pregnant mares. In addition to elevated energy requirements, nursing also boosts protein, calcium, and phosphorus requirements.

The primary goal of feeding the nursing mare should be to maintain optimal body condition. Attempting to regulate the amount of milk produced or its composition is more or less futile in everyday farm situations; therefore, the focus should be on supplying sufficient dietary energy.

Because early lactation can drain energy reserves, mares should be in at least moderate body condition prior to foaling (i.e., a layer of fat should pad the ribcage allowing it to be felt but not seen). Mares in poor body condition have inadequate internal energy stores to produce ample milk, and foals nursing these mares often grow slower than their well-nourished peers. On the opposite end of the spectrum, obese mares also appear to produce less milk than mares in moderate condition. As with the offspring of too-thin mares, the foals of obese mares tend to lag behind others in terms of growth milestones.

The temptation to overfeed energy to mares in adequate body condition may be rooted in the erroneous belief that it causes spikes in the amount of energy, protein, and fat contained in the milk. No scientific research supports this notion. On the contrary, excessive dietary energy may actually lower these values in the milk yield of mares in average or above-average body condition.

Just as some hardworking horses are unable to maintain their weight on typical portions of hay, grain, and pasture, many mares cannot stay in optimal body condition while nursing a foal. Most concentrates formulated for broodmares have a feeding rate of 10-14 pounds. If the daily grain allotment is more than 10 pounds, feeding the mare three times a day would be necessary as no single grain meal should be over five pounds.

Even when consuming the maximum amount of grain that can be safely fed and the highest quality legume hay, some mares lose considerable weight while nursing. One way to counteract this is to top-dress fat to the concentrate. This is most easily achieved by feeding a high-fat additive such as corn oil or rice bran. One alternative is Equi-Jewel, a high-fat heat-stabilized rice bran. A pound of Equi-Jewel contains more energy than one cup of corn oil or one pound of a high-calorie concentrate (such as those high in fat and fiber).

Mares that are thin at foaling must consume sufficient calories to not only support the growth of their foal but also to increase their own body condition. These combined reasons make provision of calories essential to underweight mares, especially if the mare is to be rebred. Research has shown that thin mares have a more difficult time conceiving and maintaining pregnancy than mares in average body condition.

Every attempt should be made to keep mares from becoming obese during any stage of reproduction. As noted above, obesity can lead to decreased milk production. Mares must continue to be fed forage in the form of high-quality hay and pasture, and this alone may provide sufficient dietary energy and protein to support lactation. In mares that are particularly easy keepers, excessive intake of high-quality legumes such as alfalfa may contribute to obesity during lactation, and slowly switching to a clean grass hay may deter weight gain. Mare owners must ensure proper fortification of vitamins and minerals, and this is best achieved by feeding a supplement pellet. Adequate levels of protein, calcium, and phosphorus are guaranteed if recommended amounts of the supplement pellet are offered.

Just as energy requirements are elevated during lactation, mares have an increased need for water. Studies have shown that nursing mares require 1.5 to 1.8 times more water than that necessary for maintenance, and this may be due to increased feed intake or milk production. As such, mares should have unlimited access to fresh clean water. This is particularly important in the management of mares that foal early in the year when water sources may freeze or in drought conditions when water is scarce.

By the time a foal is five months old, milk production in the mare has declined. What was once 30-40 pounds of daily milk production is curtailed to approximately one-half to two-thirds of that. As milk production wanes, so do the mare’s nutritional needs. The amount of feed may be decreased during the latter months of lactation to keep the mare at a desirable body condition. If the mare is fed as she was in early lactation, she may begin to gain weight.

In order for mares to nourish their foals properly and remain healthy throughout lactation, they must be kept at optimal body condition. This is achieved by furnishing sufficient dietary energy in the form of a well-balanced diet. Special attention must be given to thin and obese mares to ensure optimal milk production.

Is your horse currently suffering from metabolic syndrome and insulin dysregulation?

Ask your vet about InsulinWise™.