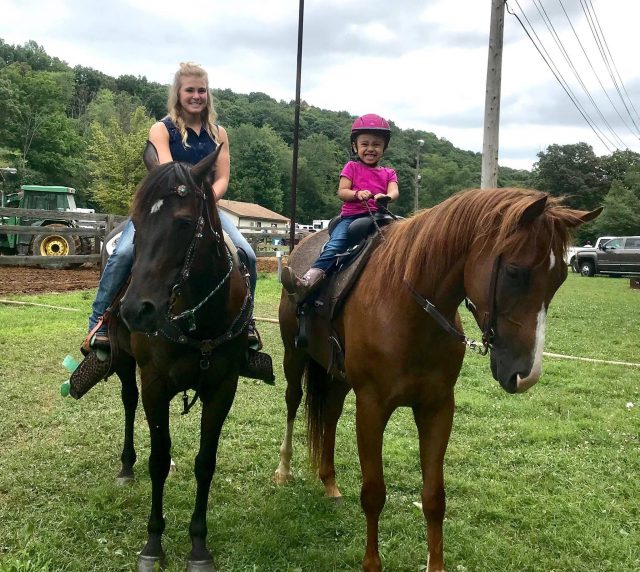 “So he may not pass a vet check with flying colors because of this. But how many great horses could? How many riders could? I know I couldn’t…”

On his journey to recovery I, along with In Stable Hands, have faced many challenges and educational topics that I have been sharing. We’ve faced and discussed proud flesh, the fracture, the tendon damage and maintaining a healthy weight. I’ve discussed a particular day where Buns decided it was a good idea to jump the round pen and pull down his stall front in a 24 hour period and kept viewers up to date on vet check ups.

Since the last article, I have not added or done anything new to Buns’ care regimen so I have decided to tell you the reasons why I have gone through such extensive care with Buns, rather than thinking about the option of putting him down.

Buns has been with me since he was retired from the track as a two-year-old in 2016. I bought him with the intentions of having him as a resale project to compete with at the Retired Racehorse Project Thoroughbred Makeover in 2017. We did of course go on to do that, but when I walked up to his stall at The Thoroughbred Training Center in Lexington, Kentucky and saw this little (14.1 hh at the time) red gelding, he stole my heart and I knew he was something special. 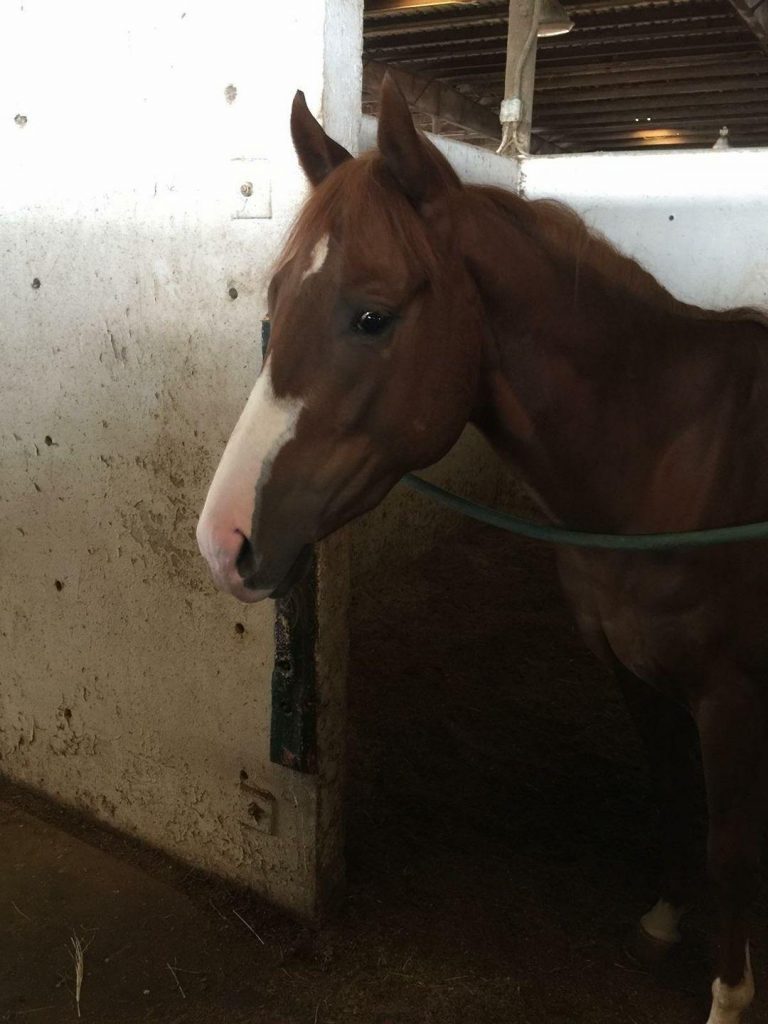 Buns the day I met him at the Thoroughbred Training Center in Lexington, KY. Photo taken by Marcella Gruchalak.

Since then, Buns has touched hearts and taught many, including me, how large a horse’s heart is. He has given me more try and dedication than any other horse I’ve thrown a leg over. Because of his loving and hard working demeanor, we have accomplished so many things together in the close to four years I’ve had the opportunity of sharing with him.

Buns and I went on to compete at the 2017 Retired Racehorse Project Thoroughbred Makeover. I originally had him slated for Barrel Racing and Competitive Trail, but during the time I had to prepare him for the Makeover, I realized barrels weren’t his calling and switched to freestyle. 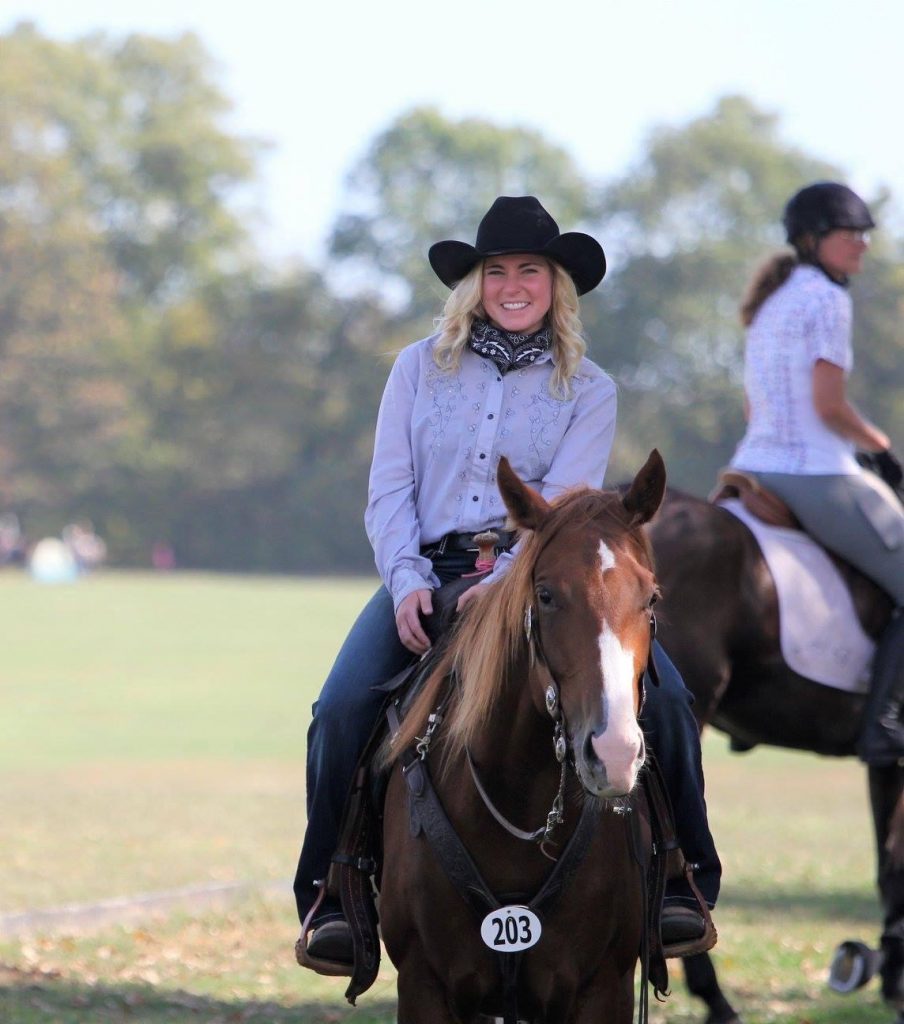 We did well in Competitive Trail, placing in the top 10. As for our freestyle, we did some Mounted Shooting, Buns’ real calling, and one judge commented that “the content in the routine was boring.” Well, we can’t win them all and I knew going into the Makeover that it was just the beginning for Buns. 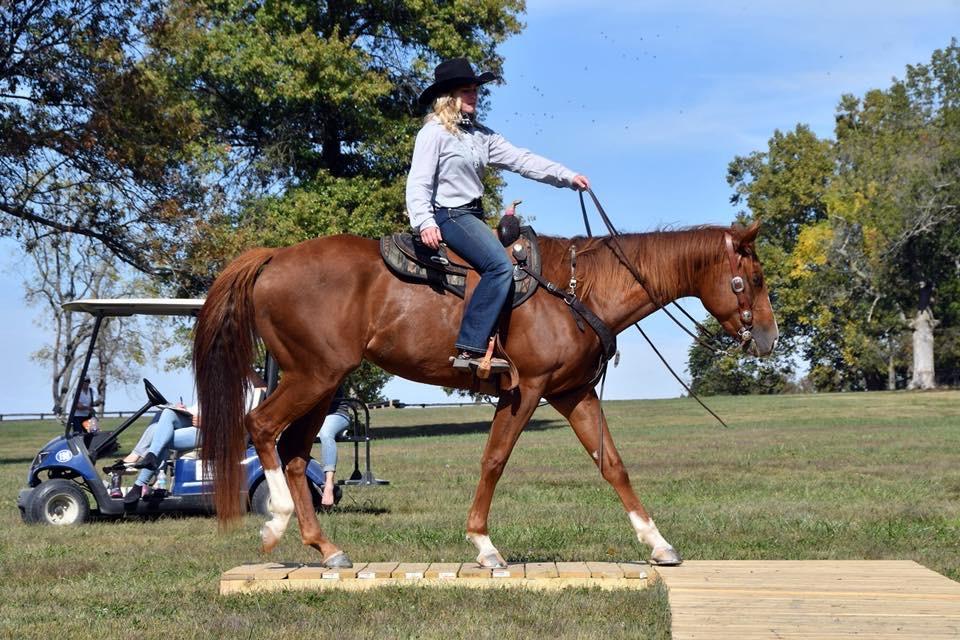 In January of 2018, Buns and I had the opportunity of going to a benefit for Children’s Hospital of Pittsburgh at Hollywood Lanes where Buns stood quietly for the fashion show models and children to help raise money. He was so well behaved and quiet all night long.

Buns at the Children’s Benefit with some Star Wars Fashion Show Models. Photo by Marcella Gruchalak.

After the conclusion of the benefit, I decided to take him through the Wendy’s Drive through for a chocolate Frosty. This fun bucket list item made Buns famous. We were on news stations such as CNN World News, Good Morning America, The Chew, local news and news stations in the UK.

Becoming an internet sensation allowed us to be interviewed and given a tour at Robert Morris University. Buns stood at certain locations as a “therapet,” giving students the opportunity to de-stress between classes. Becoming an internet sensation also allowed us to take a local radio cowboy, Cowboy Curt, from Y108 Pittsburgh, through the PNC Bank Drive Thru. 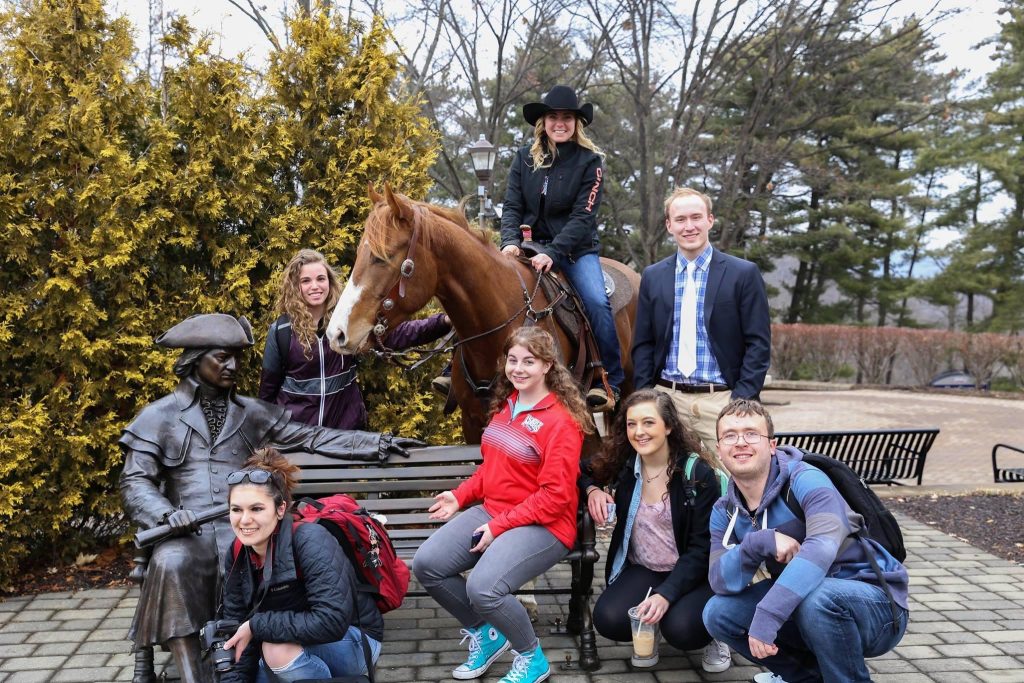 Buns didn’t stop there. My growing superstar (in fame and height) has had the opportunity to share his beautiful face in two magazines, Inspiring Lives Magazine and Off-Track Thoroughbred Magazine.

Aside from these really fun things we were able to be a part of, Buns has provided my family with more than any other horse I have owned. He teaches and is patient with anyone who gets the opportunity to learn from him. He’s taken my nieces on sled rides, lessened my sister’s fear of horses and has even been shown in barrels and poles by my niece who is the same age as Buns. 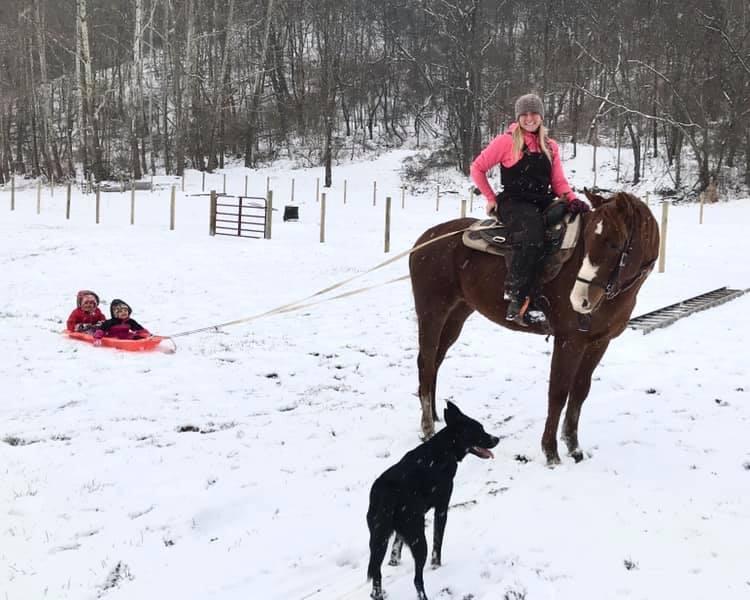 But this is not the sole reason I am going through extensive rehab to keep him around. Buns is MY horse (although my niece really believes he is hers). He’s my partner, my teammate and he and I are on the same page, always. If there is ever a miscommunication in riding, it is because it’s my fault. Buns does exactly what is asked of him, every time.

We have done so many things and gone so many places together. We were a part of the CMSA Borla Equestrian Team, running flags at the major Cowboy Mounted Shooting Association (CMSA) shoots. We traveled to Mississippi and Tennessee to partake in those events. He has been my teammate and won me different mounted shooting titles. He’s taken me from a Ladies 1 shooter to a Ladies 2. 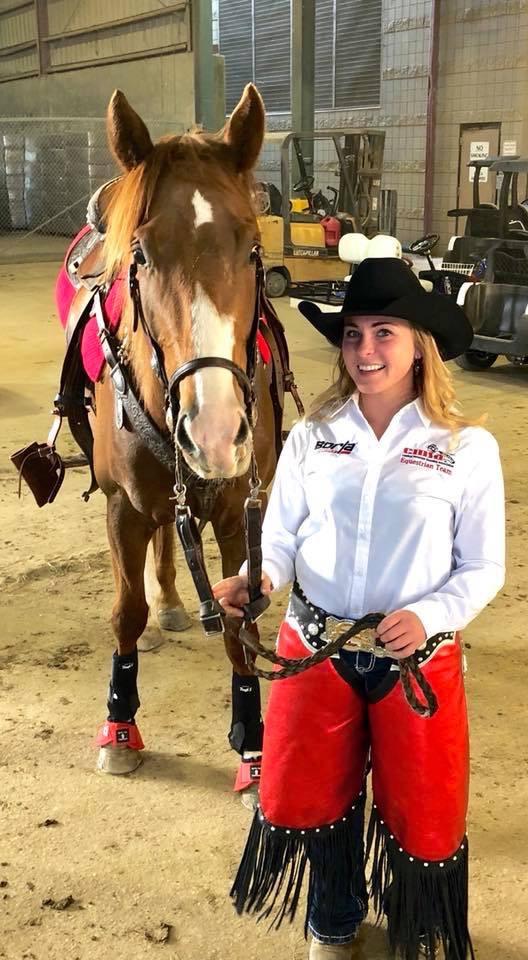 Buns and I before running flags at a CMSA event with the CMSA Borla Equestrian Team. Photo by DJ Simoncic. 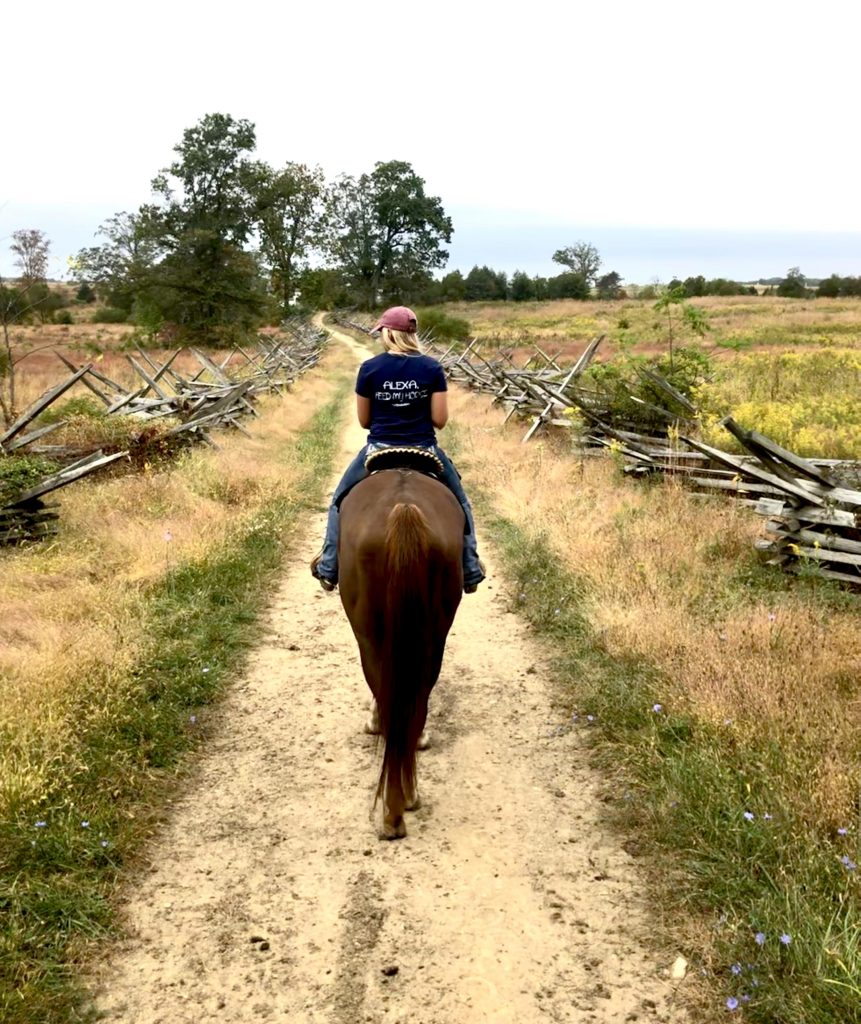 He truly is irreplaceable — and he hasn’t even reached his sixth birthday yet.

Buns’ potential hasn’t even reached its full capacity yet. He’s still young and learning — and I’m learning alongside him. I’m not ready for that to be a distant memory so I am putting forth everything I have to make sure he heals and is still capable of being a great horse.

So he may not pass a vet check with flying colors because of this. But how many great horses could? How many riders could? I know I couldn’t. In less than six years, Buns has been trained and seasoned, used by multiple different riders and grabbed the hearts of so many. What’s a temporarily dry bank account and a life of a bit of maintenance? I can tell you, it doesn’t bother me one bit if I get to continue enjoying life with my once-in-a-lifetime, worth his weight in gold, horse.