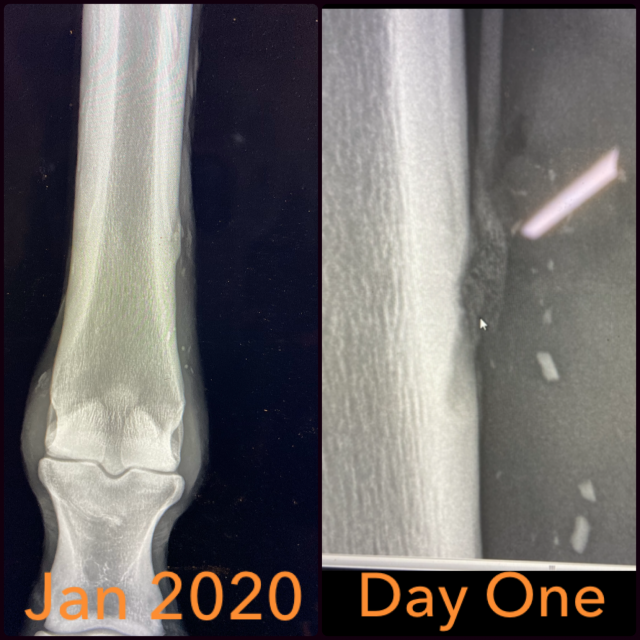 “Tick tock, tick tock. I was losing my mind. And then, there it was — the x-ray picture of Buns’ fracture.” Read more to see what the X-ray showed, what new interventions we’re implementing and a rough timeline of Buns’ recovery.

If you’ve been following the series about Funny Bunny B’s complex injury, you know he has a long road to recovery ahead of him. If you haven’t had the chance to read about the nightmare, here’s a recap: On October 7, 2019, Funny Bunny B (Buns) sustained an injury to his right hind leg. He has a fracture, torn tendon and soft tissue damage.

On his journey to recovery I, along with In Stable Hands, have faced many challenges and educational topics that I have been sharing. We’ve faced and discussed proud flesh, the fracture, the tendon damage and maintaining a healthy weight. In the last article I discussed a particular day where Buns decided it was a good idea to jump the round pen and pull down his stall front in a 24 hour period.

This episode called for intervention so I scheduled a follow up appointment with the veterinarian to see how he was progressing and how we could keep him safe. On Friday January 17, 2020, the vet paid Buns and me a visit.

The first thing she did when she arrived was a lameness exam. She noticed minimal swelling at the injury site and stated that it may not get any better than that. He may always have a little swelling at the site since there was so much damage to the area.

She had me trot him off in both directions and he was feeling frisky. The vet stated, “I have never seen him like this. He’s always so quiet.” I proceeded to tell her about our mishap. Meanwhile, she was telling me that he looked sound at the trot and had some follow up questions about how long I noticed that he was sound. That was good news! 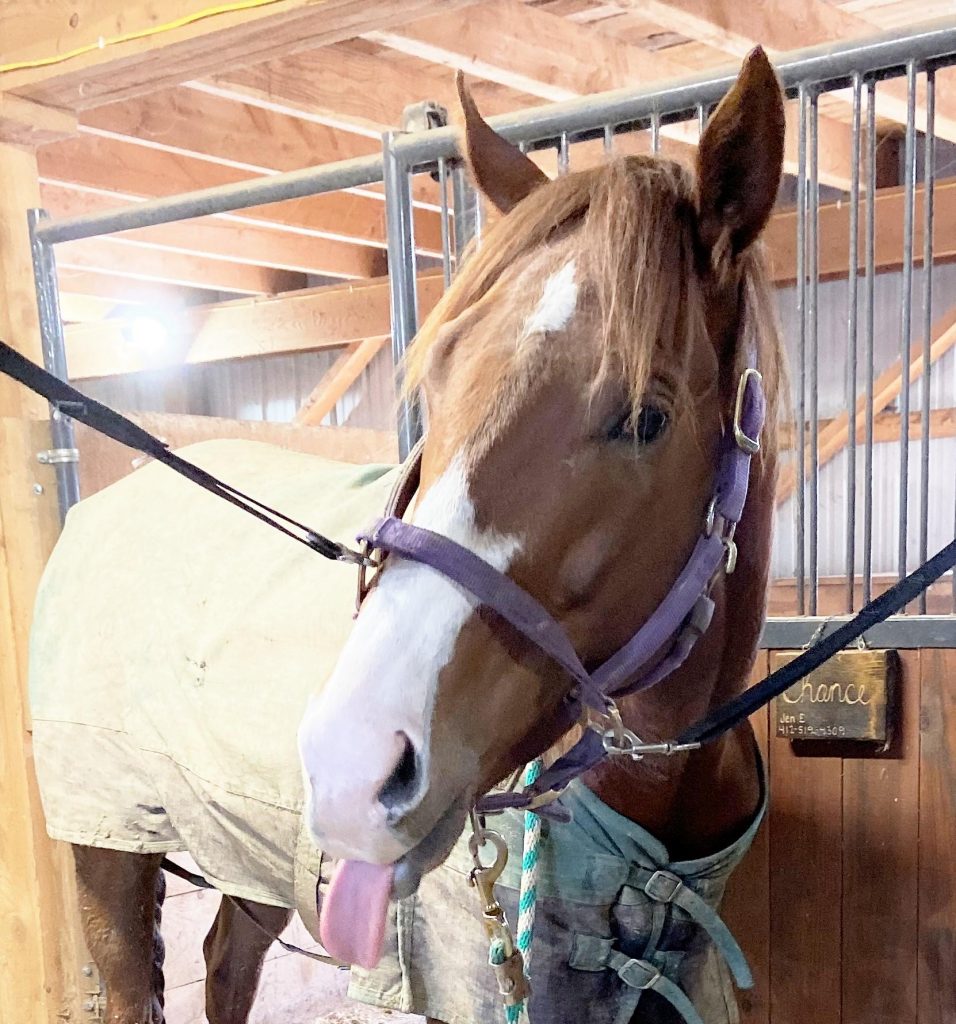 This is how Buns feels about stall rest. Photo by Marcella Gruchalak.

We then took him into the barn to get an x-ray to see how the fracture was healing. I was anxious to see the result of the x-ray. It felt like it was taking hours for her and her assistant to set up the machinery and obtain the film.

Once they took the film I had to wait for it to be uploaded to the computer. Tick tock, tick tock. I was losing my mind. And then, there it was — the x-ray picture of Buns’ fracture. The fracture is almost completely healed and it’s looking good! Within a few weeks, the fracture should be completely healed. 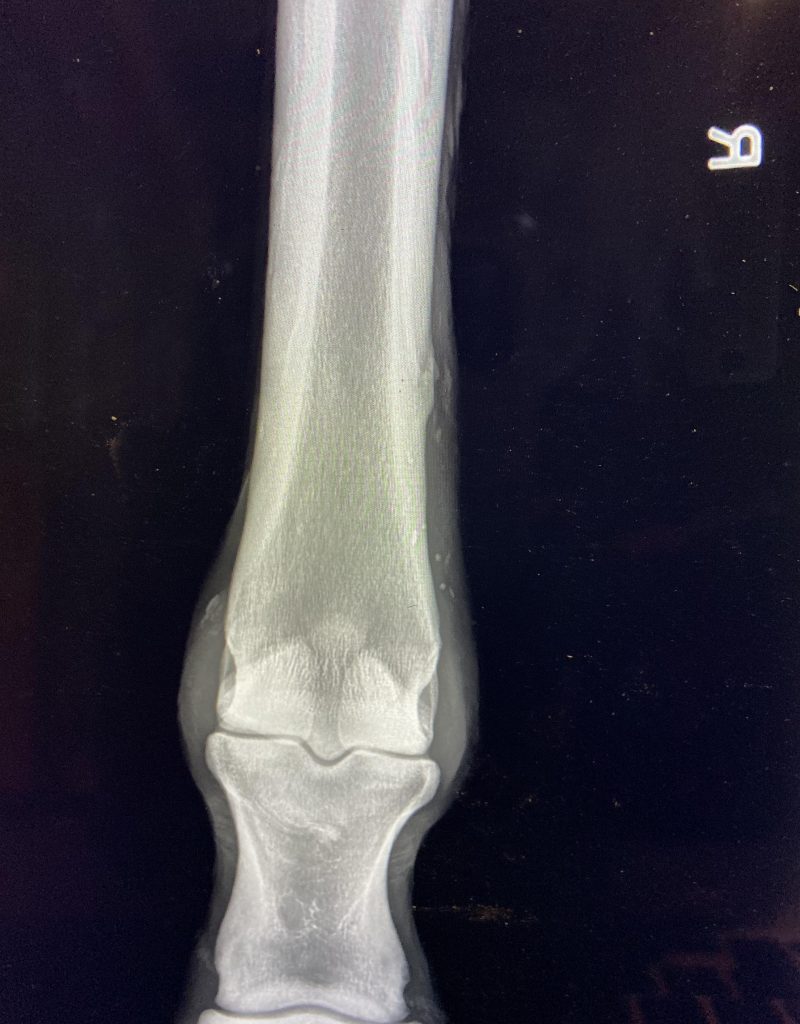 The vet stated she was not going to ultrasound the tendon because if one part of the injury is still healing, there’s no use in her charging me to tell me the other components are also not fully healed. She stated that once the fracture is fully healed, since that is the part of the injury that should take the least amount of time to heal, then we will focus on the tendon injury and start ultrasounding. 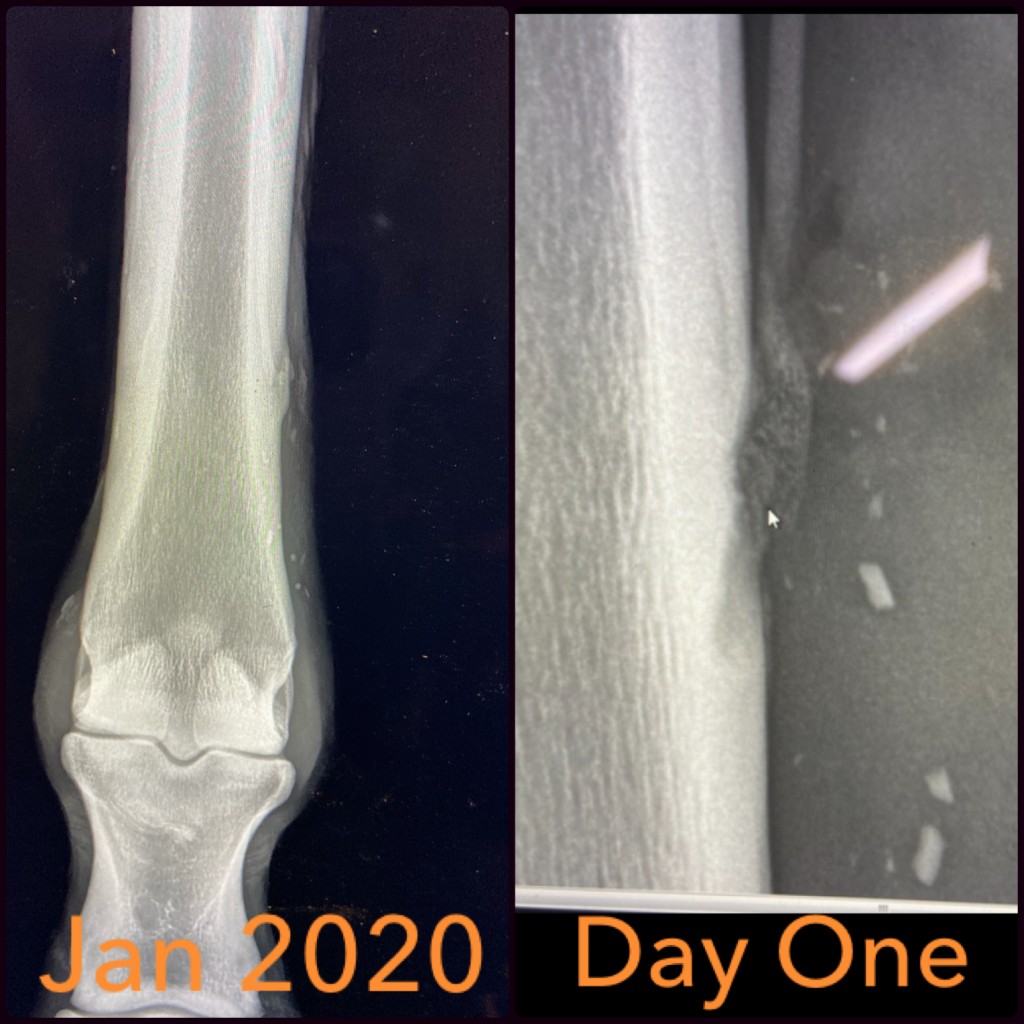 As for overall healing and soundness, the vet stated that she was really pleased with the Buns’ results. I have been doing red light therapy every chance I get, supportively wrapping the leg and using back on track quick wraps to promote healing. 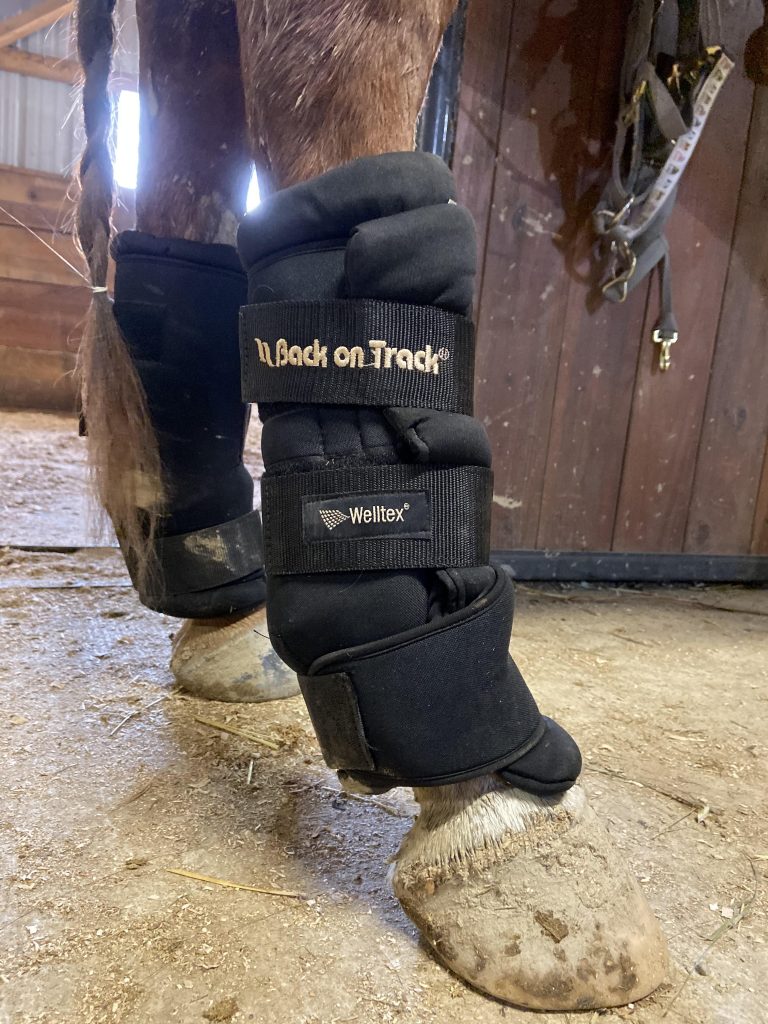 During the vet’s visit she administered a dose of Polyglycan and, per her recommendation, I have started Buns on Isoxsuprine to try to decrease the swelling at the injury site. Isoxsuprine aids in circulation and has some anti-inflammatory properties, which will hopefully result in decreased edema and soft tissue inflammation.

Here’s where my anxiety set in. I asked the question I had been dreading:”Now that we have a gauge of how he’s healing, roughly how long do you think until he can start back to work?” To my surprise, the answer was sooner than I had anticipated. The vet anticipates that Buns should be able to start back in light work by late April or early May.

We are going to recheck his injury during the vet’s visit for spring shots and we’ll go from there. There’s no telling if he’ll stay sound for his job at a competition level but we’re going to take baby steps and take the riding portion of rehabbing painstakingly slow. I’m really hoping if I incorporate all the resources I can to promote healing, we’ll have a positive outcome. 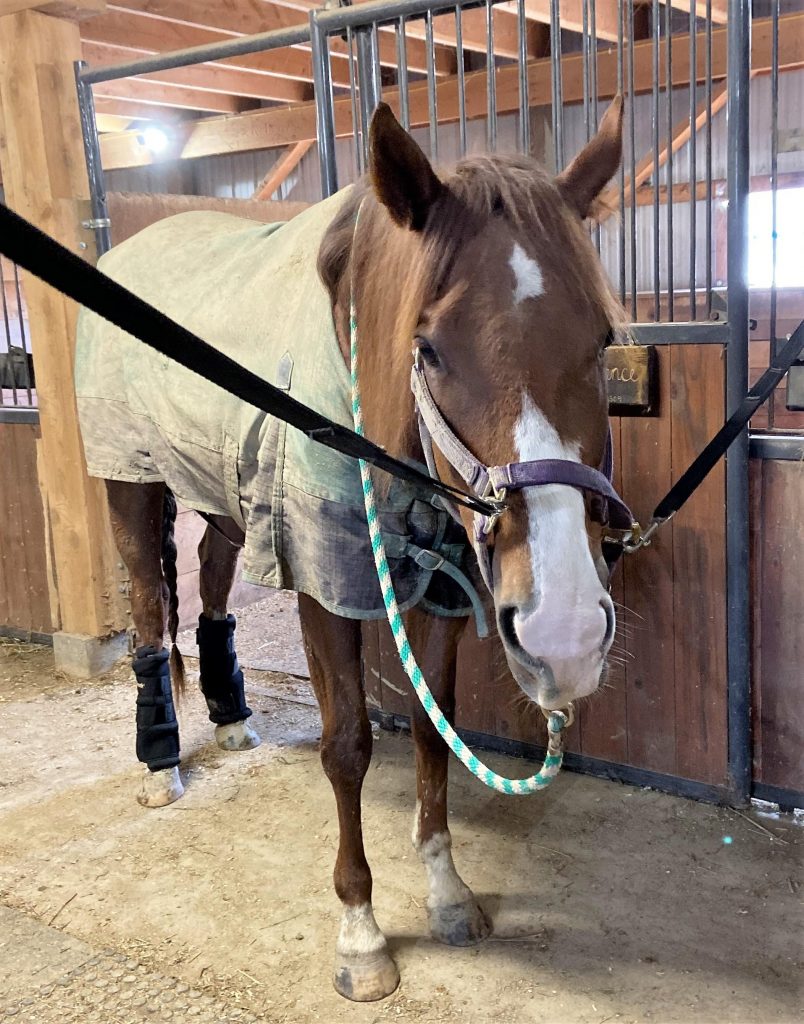 Before the vet left, I addressed the last but certainly not the least of my concerns. His crazy outburst from being pent up. Her response — give him paddock/turnout time. When the risks outweigh the benefits, it’s time to give him turn out. She stated within a couple days of turnout time he’ll be back to his good ole quiet self.

So far, since starting the Isoxsuprine and providing turnout, Buns has gone back to his quiet self and the swelling at the injury site has been minimal. Fingers, toes and eyes crossed, not to mention the many prayers, I’m hoping we’re over the hump and come spring, we have more good news! 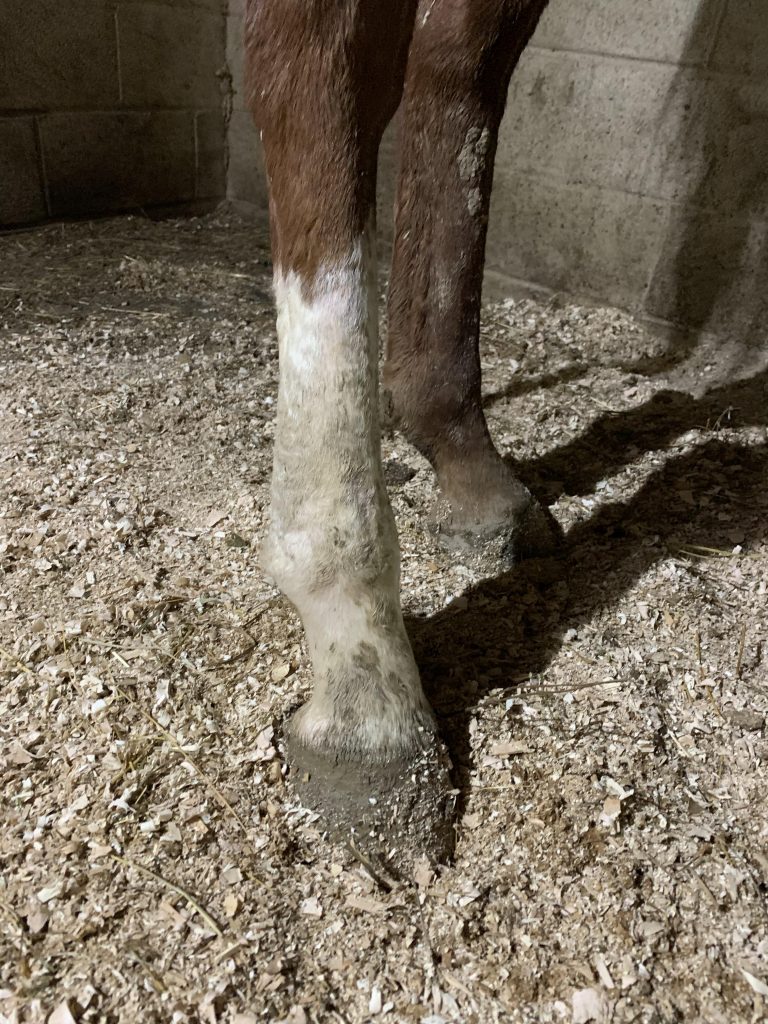