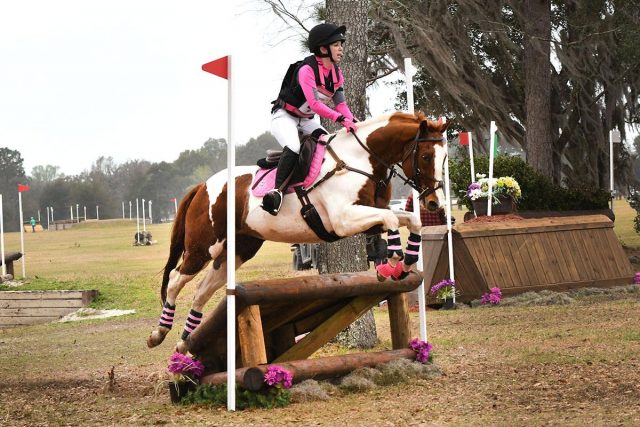 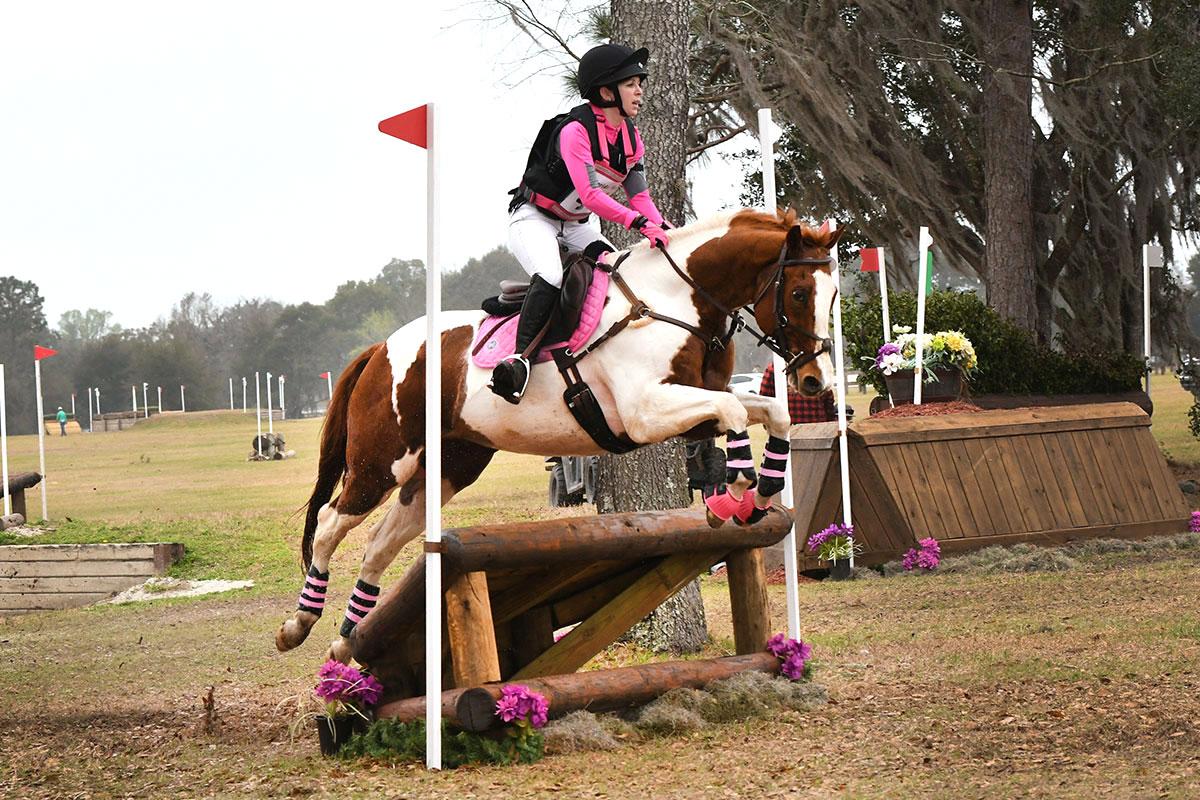 It’s not a picture of the coffin, but this chevron is still damn cute with the matching pink flowers. (Photo by Xpress Foto)

Earlier this year, my coach Lauren Turner of River Birch Farm offered to put together a field trip to Florida for her team. I had so much fun wintering in Ocala last year that I said yes, of course!

We hauled down to our ten-day temporary home at Wise Horses Farm (owned by Olympian Ronald Zabala-Goetschel) on Thursday, got the horses settled in to the absolutely gorgeous facility, and got some rest.

Friday morning, JJ and I had a flat lesson with Lauren and got a much-needed tune up. JJ also got a much-needed bath, as he was so filthy that he had leaves stuck to his sides after rolling in the pasture – seriously.

Saturday morning we loaded up and drove the 1.5 miles to the Florida Horse Park. (Have I mentioned how insanely perfect this location is?!) Lauren suggested we try a new strategy for JJ’s dressage warm up where we keep it super short, and I’m pleased to say that it paid off. He was much more cooperative during than usual, appropriately relaxed, and I left the arena feeling like we had put in a really good test.

After, we came back to the trailer, I tied JJ in front of his hay bag, and went off to watch Lauren run her Training cross country. When we came back later, he was still there and looked half asleep, but one of my teammates, Carol Lane Tresan, told me he had gone on a pretty epic adventure.

It was really windy, and apparently one of the trailer’s tack room doors flew open and scared the crap out of him but he stayed put… until a saddle pad flew out a few seconds later and went right up between his hind legs under his belly. Can’t blame him, but he absolutely lost it and snapped his safety tie and took off galloping around the ship-in area! I am SO grateful that Carol was there keeping an eye on our horses, because she was able to catch him and keep him safe. THANK YOU, THANK YOU, THANK YOU CAROL!!

Anyway, a few hours later and no worse for the wear, JJ and I made our way down to stadium. The course was surprisingly simple with no filler and no flags (so grateful for that, especially with the wind!) and JJ went well in warm-up.

I know sometimes he takes a rail in stadium (which is weird, because he generally doesn’t at home) so I tried to “keep him sharp” by making him take a rail in warmup instead… and he wouldn’t! So, I felt good and went in when called.

The first seven jumps were darn-near perfect, and I was super pleased. There was a final line of an oxer to a two-stride oxer and vertical combination, and coming around the corner into the line I tried to hug the rail and get him as straight as possible but somehow still knocked the rail on number eight. Le sigh. We got through the next two clean, though, so it was only four faults. 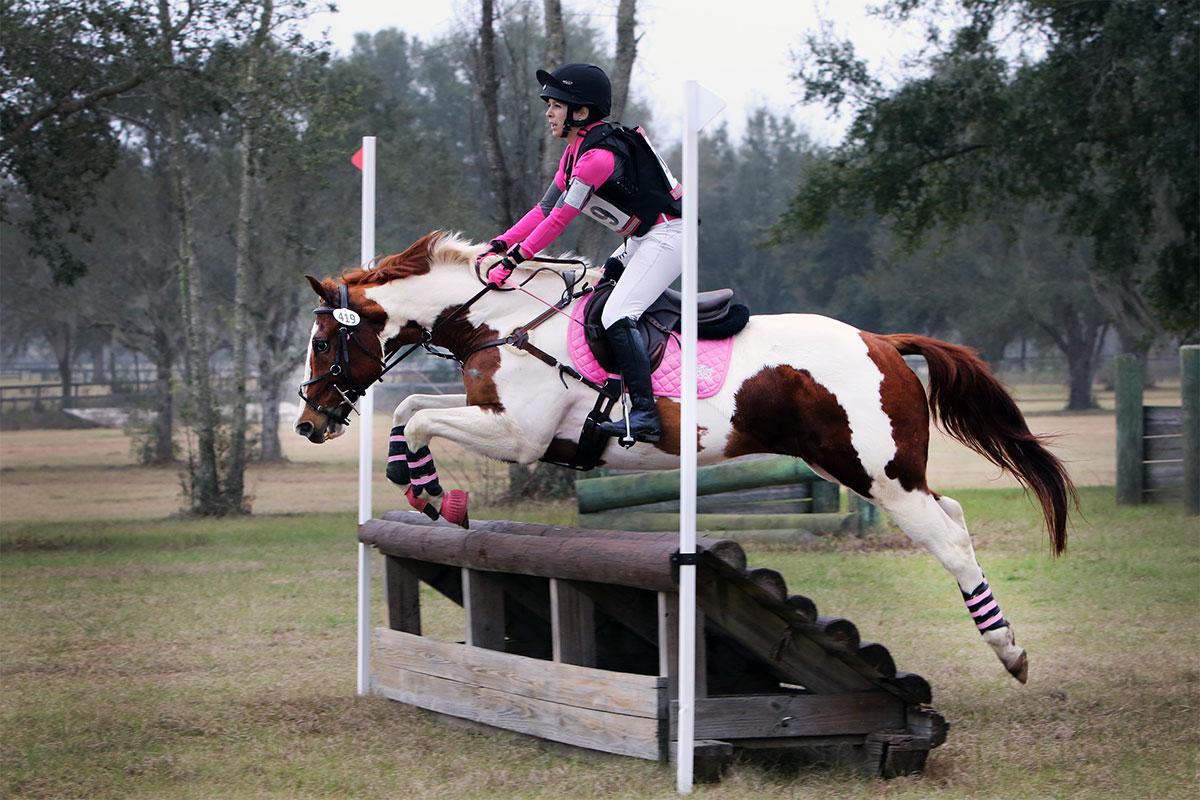 He really loves those gallop fences! (Photo by Xpress Foto)

Having walked cross country the day before, I knew it was time to focus on that next task at hand. The course was, without question, the biggest and beefiest Novice course I had ever seen and I was feeling realllly apprehensive about it.

The jumps were large, there were two water crossings that weren’t even flagged, there was a full coffin (which included a “scary” jump that JJ stopped at when we schooled here last January), there was an up bank to the biggest down bank we’ve ever jumped only two strides later, followed by a second down bank with a quick left turn to a maxed out roll top plus brush, and even a chevron. I wasn’t sure we could do it, but I remembered the compliment Jeanie Clarke gave me last year when she told me we had no business being in Beginner Novice. She was right, and I used that as a confidence booster.

So, Sunday morning I awoke and prepped for day two. While JJ was munching breakfast, I dug around in my car and found a set of new stirrup grip pads I had bought but hadn’t put on my saddle yet. I have been losing my stirrups a lot lately, and just figured it was because I was riding like crap, but finding the grips prompted me to check my jump saddle stirrups… yep, they were worn almost completely smooth! So, I slapped those new babies on right away.

The weather was dismal and drizzly, and that sure didn’t help my nerves… but I trusted my coach, I trusted JJ, and I tried to trust myself. The moment I swung my leg up to head down to cross country, I realized the new stirrup grips had made a huge difference and I felt so much more secure! I’m happy to say I left the start box ready to tackle the tough course.

I (almost) can’t believe I’m saying this, but the course actually wound up being fairly easy AND fun! JJ was super and said “yep, let’s go!” to everything. He didn’t even try to stop for a drink in either of the waters. There was only the idea of a question about the jump out of the coffin which I expected and quickly quelled, and one little peek at the first down bank but he went off without hesitating. Everything else was basically perfection, and I may have actually smiled once or twice.

Coming into the second to last jump, JJ tried to slow down and I told him ‘no, we’ve got to keep going’ to which he responded “mom, seriously, we need a breather here.” I legged him forward, not wanting to stop until we were done, and we rocked the next two. As we crossed the finish, I glanced at my watch and hit stop on the timer… to see we had 32 seconds left until optimum, which was the exact amount I had calculated we needed less than to not incur speed faults! I had forgotten to look earlier – oops!

I thought it was so funny that we had gone cleanly (and easily) around our hardest Novice course to date only to screw it up with a speeding ticket, but was exceptionally thrilled to see that when the final results came in that we were actually double clear!! The speed faults time was 4:19, and that’s exactly what we did the course in! Clearly, JJ knew best when he told me we had to slow down. He’s a smart cookie, that kid.

Ultimately, we finished sixth out of 14 and I am so So SO happy with my handy horsie! We had scored 33.30 in dressage plus four for the stadium rail, but even without it we would have only finished fourth — which wouldn’t have been an AEC qualifying score anyway so that rail down wound up being totally irrelevant in the grand scheme of things.

Next, we’ll spend five fabulous days at Wise Horses Farm flatting in their beautiful covered area, jump schooling the spacious course with the pristine footing, galloping the massive race track, training on the incredible cross country course, and working hills over all the amazing acreage before another event at Rocking Horse. This place is paradise, perfected.