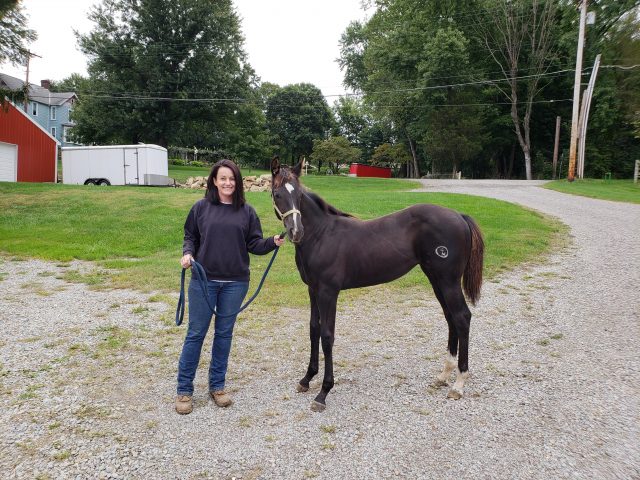 January 13, 2020DeAnn SloanNicole Cammuso#HORSE TRAINING, #obstacles, Ground WorkComments Off on Bringing up Baby: What Can Be Accomplished in the Weanling and Yearling Years

There is much that can be done with weanlings and yearlings to prepare them for their jobs once they reach physical and mental maturity. Here are 14 things you can do with your young horse to get it ready for life in the “real world.”

Waiting for your foal to be grown enough to start under saddle can be a long few years. If you have no other prospects to ride in the meantime, it can feel like an eternity. Just the thought of having a late grower is enough to put you in a deep depression, so you pray they will be big enough for at least a light start around two years of age.

When I got my filly Bugatti, that is exactly how I felt. I was excited to watch her grow and do as much with her as I could, but the day of our first ride seemed like a lifetime away. Was I really going to be ok with not having something to ride for the next two years?

Everyone seems to have a different approach when it comes to raising youngsters. Some foals are handled a lot, and some are left alone until closer to their two-year old year.

My goal has always been to have my filly learn as much as I could before starting her under saddle, so that by the time I went to get on her, she was already basically broke.

I approach her training by keeping things as simple and fun as I can, mimicking how I would teach a child. Starting as early as possible also allows me to problem solve any tantrums with a 500 lb horse as opposed to a 1000 lb one.

So, what all can you accomplish with your foals as they are going through their weanling and yearling years?

1. Get them used to being touched.

Have you ever worked with a horse who didn’t like their ears touched or tried to kill you if you touched their hind legs? I have, and it made me wonder if this was due to a lack of touching and grooming while the horse was a foal. In my opinion, this is probably the easiest thing you can do with your foal, and something you can start even prior to weaning (if you have access to the foal before then). Make sure to not forget the legs. Get those babies used to having their legs picked up and touched. You can start out holding them briefly and build on durations.

2. Standing for the farrier.

If you do a good job with getting them used to being touched and having their feet picked up, you will have a good start to making sure your baby becomes a good citizen for the farrier.  We all know the importance of staying on the farrier’s good side. 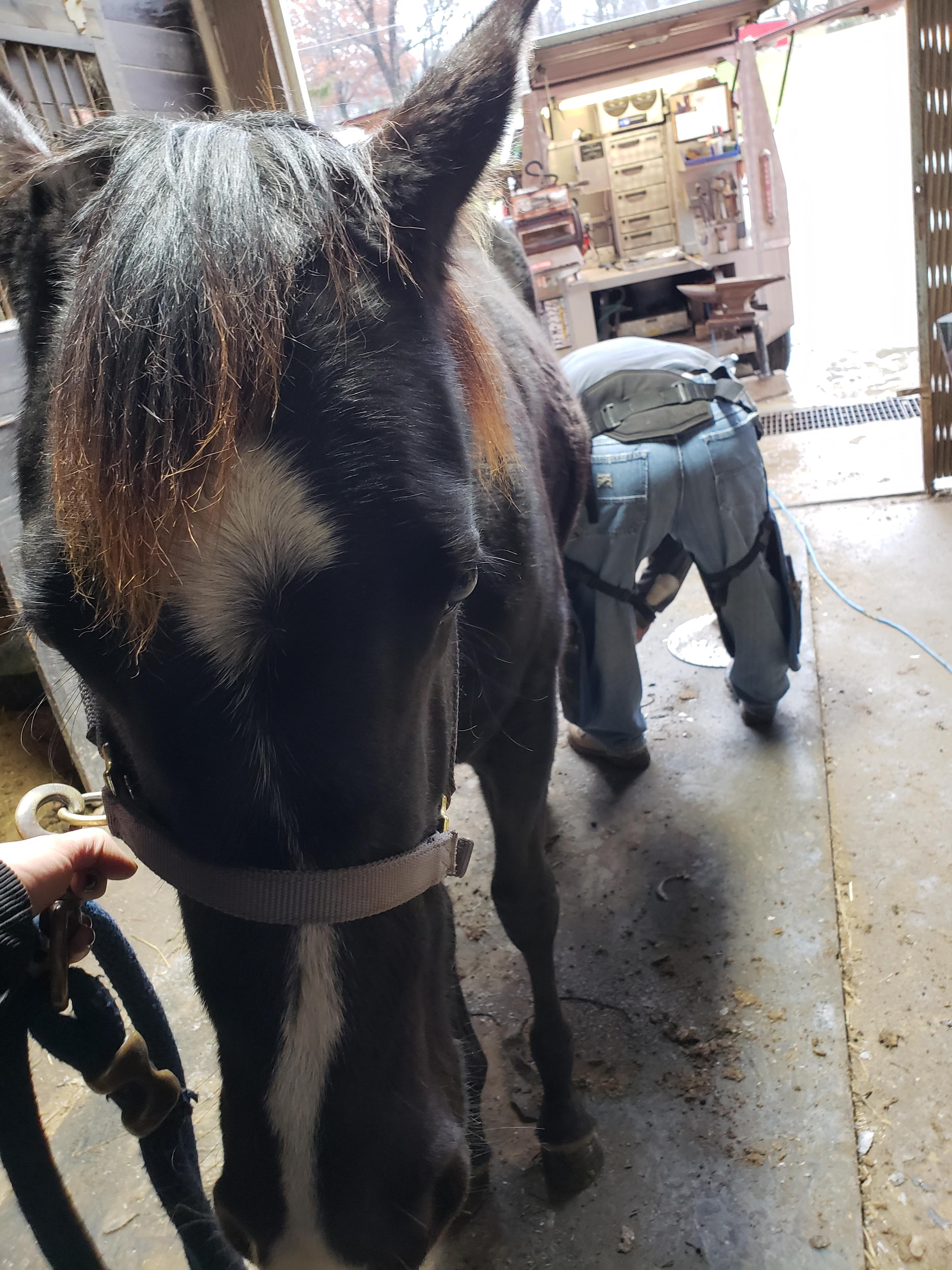 You may think your baby has years before needing to be getting on a trailer, but what if something happens and you need to haul your youngster out to a vet appointment? There is no reason why you can’t train your foal to be the best loader and unloader in the barn. 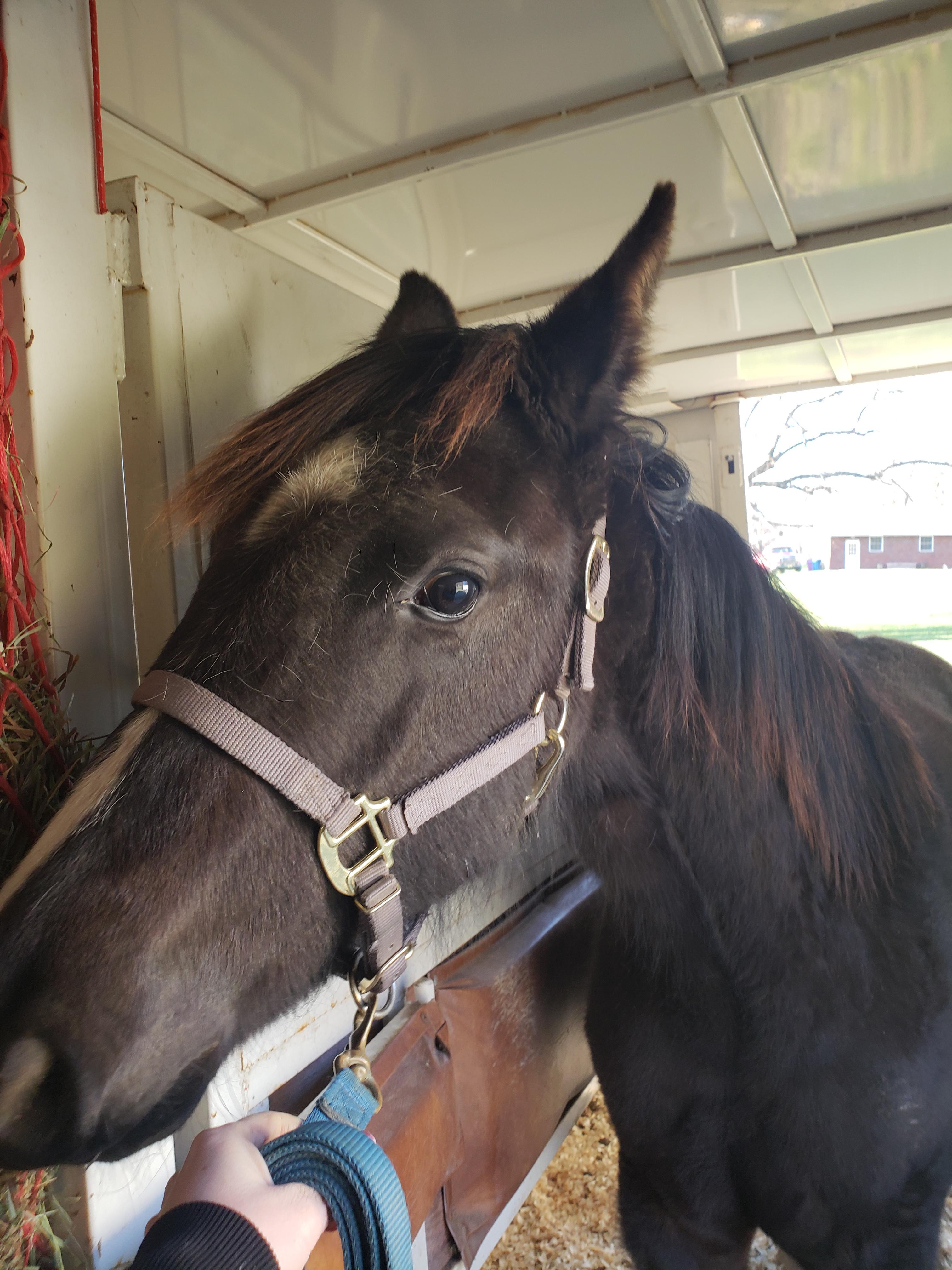 A good horse knows how to stand tied quietly for hours at a time. This is something simple that babies can start getting used to. I found it helpful to start Bugatti in a stall, so she had the walls to bump into when she would backup up too far or threw tantrums. I always make sure that whatever they are tied too has some sort of emergency release component to it.

Welcome the newest member of my #darkmaresociety a 2018 black AQHA filly. Her registered name is pending approval, but im still playing with name ideas for her barn name. She is already proving to be a super smart little girl. #dashofmoolah #aqhafilly #racebred #cowbred #futureshootinghorse

5. Introducing them to water.

When life hands you lemons, make lemonade. Flooded arena? Giant puddles in the driveway? Time for baby to learn about going through water. 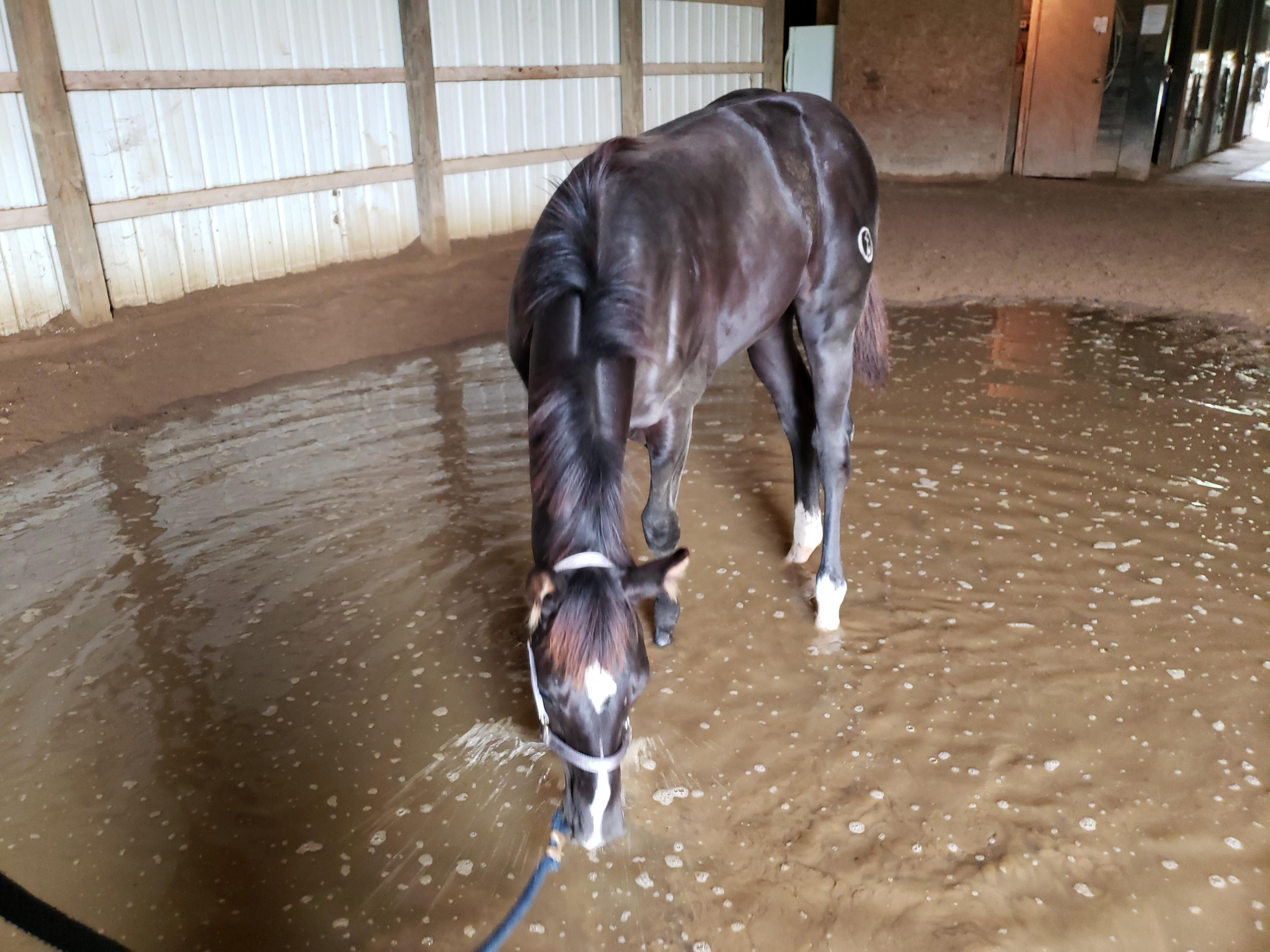 6. Learning to be ponied.

If you have a well-mannered mount that won’t harm the little one, you can use them to teach your foal to be ponied.  Not only does it help get them moving better to halter pressure, but also gets them used to seeing you at a higher level than them, which is where you will be when it is time to be ridden.

As much as you can get them used to while they are young, the better. Do you have aspirations of competing in judged obstacle events? Your foal can be a well-oiled obstacle machine before he/she even turns two! Even if obstacle work isn’t your forte, you never know what you will encounter with your horse. It is a great way to strengthen your bond and get your foal on its way to becoming bombproof. My hope for my filly is that she is my next mounted shooting horse, so I have been getting her broke to the guns early so that it will be no big thing when we start riding.

8. Hauling off the property.

Why not take your baby off the property to learn the ways of the world? It may not be as fun as riding, but standing with your youngster as they take in the chaos of a show environment can help get them get used to all the activity long before you are riding them. Then all you will have to do is get on? Right?

Everything we do with our horses requires body control, whether it’s riding or on the ground. I had my filly backing, turning on her haunches, doing forequarter turns, and side passing all before she turned one year old.

Forward motion is equally as important as lateral work. I try not to do many small circle drills with my filly, as she is young and I wouldn’t want to put extra pressure on her knees, but she does know the concept of forward movement and we are working on voice commands for the different gaits.

I don’t ground drive much, but it is a handy exercise. After you have the forward motion, you can teach turning with a halter and long lines to prepare them for their riding (or driving) future.

My 11 month old learned how to ground drive today. She steers, stops, and backs. 🤩 No big deal. 😎 Superstar in the making! #imakemoolahmoves #dashofmoolah

I always find it easier to get a horse used to getting legs wrapped before an injury occurs, that way I don’t have the potential pain and swelling to contend with. And as long as I am not putting excess weight on my filly, I find it acceptable to also get her used to wearing a small light-weight saddle. Some horses aren’t fans of the feeling of the cinch or the flapping of the stirrups, so whatever I can do to make saddle breaking go smoother and become no big deal, it’s a win.

Big girl got to wear a tiny pony saddle today. Will make ground driving her easier 🤣 Such a good minded girl.

In my recent bi-monthly training articles for Horse Nation, I have been discussing rebuilding my current training program, and a big part of that is finessing my ground work from a pressure cue to an intent cue, using positive reinforcement and building upon maneuvers. Bugatti has been having fun with it as well!

Having a beer with your horse is the best part of horse ownership. Legal drinking for horses is five months. They say you can tell a lot about someone by the first beer they prefer, and this is also true for horses. Bugatti used to only drink Pumking, but she did grow into liking a cold Summer Shandy during those warmer months. I’M JOKING. (Except for the part about her liking beer, because she kind of does).

She is now three months away from officially being a two-year old and I am finding myself wondering where the time has gone? Have I done enough with her? Am I setting her up with a good foundation? I will soak in these last few months before she officially becomes a big girl, but I guess life won’t be so bad if she is a late grower and I have to push back her riding career a bit.